A piece of rock ‘n’ roll history involving Boston band Aerosmith has been found on the other side of Massachusetts.

In a recently aired episode of the hit History Channel show, “American Pickers,” hosts and antique scavengers Mike Wolfe and Frank Fritz tracked down the band’s original tour van in Chesterfield that the group used to schlep to gigs around New England in the early 1970s.

Not much was initially known about the rusted, 1964 International Harvester Metro van, buried in the woods, said the property’s owner, identified only as Phil, who told Wolfe and Fritz the vehicle was there when he bought the land.

The previous property owner had a connection to the band, he said, but it was unclear if the van had ever been used by the group.

Finding out would require a first-hand witness: Ray Tabano, a founding Aerosmith member and guitarist.

In the episode, which aired July 30, Wolfe reached out to a friend, Dan Auerbach, of The Black Keys, who in turn sent along photos of the van to Aerosmith guitarist Joe Perry.

Tabano, in Stockbridge when the pickers were inspecting the van, said he made his way over after getting a call from Perry and confirmed the van’s authenticity.

“I’m afraid to say how long it is, but it’s been like 40 years since we’ve been in this thing,” Tabano told Phil, Wolfe, and Fritz, and even showed them a photo of himself in the vehicle taken back in its heyday.

Tabano, who was in the band from 1970 to 1972 before working for the group later on, said the van was like a “rolling hotel” in the future Rock and Roll Hall of Famers’ early days.

“We’d drive from Boston up to New Hampshire for $125,” he said, referring to the pay for the band’s gigs at the time. “Then after the gas, the tolls, and the food and back, we’d all make like $3 apiece.”

The van sold for considerably more than that, however, with Wolfe and Fritz picking it up from Phil for $25,000, according to the episode (which also flashed a glimpse of the now iconic photo of a young Charlie Baker rocking out at an Aerosmith show in 1979).

“It just reminded me of the humble beginnings and I look at where (the band has) gone today — it’s just amazing,” Tabano said of the van. 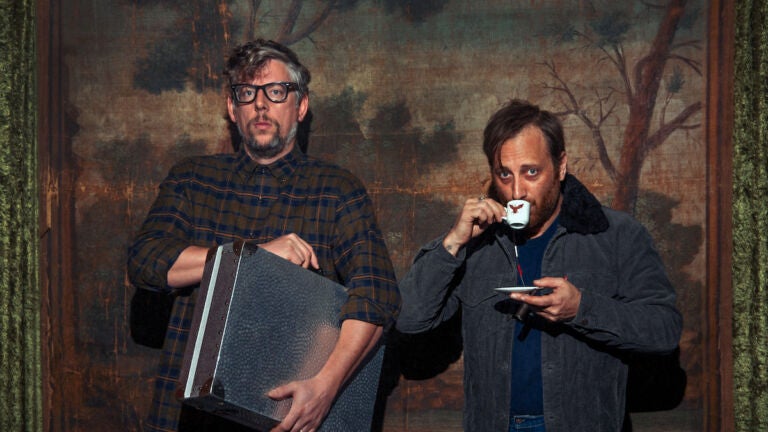 The Black Keys' Pat Carney on 'Dropout Boogie,' going back on tour, and the 'small world' of rock 'n' roll