SEOUL, South Korea — He may not look it, in a spiffy double-breasted suit and a coiffure secured with enough hair gel to reflect the ceiling lights, but the 45-year-old music executive confides a secret as he rubs his temples: He’s hung over.

But he doesn’t mind nursing this headache, at well past 2 p.m. on a Thursday in Seoul. Some of his best songwriting ideas come to him, he said, in the malaise that follows a night of hard drinking.

The man doing the creative suffering is Psy, a onetime global internet sensation whose 2012 viral music video and earworm of a song, “Gangnam Style,” became the first YouTube offering to surpass 1 billion views and had the world galloping along with him.

The outlandish but irresistibly catchy song and accompanying video — which has Psy doing the tune’s signature horseback dance move in and around Gangnam, an upscale Seoul neighborhood — achieved the breakthrough, worldwide success that had mostly eluded Korean pop acts, or K-pop, before then.

The video, which now has some 4.6 billion views, was so culturally pervasive in 2012 that Barack Obama was asked about it on Election Day. NASA astronauts recorded a parody, and a North Korean state propaganda site evoked the dance move to mock a South Korean politician.

But for several years in the aftermath of all his viral fame, Psy said, the song’s success haunted him. Even as he was thrust overnight into a Hollywood existence, getting chased around New York City by paparazzi, signing with Justin Bieber’s manager and releasing a single with Snoop Dogg, internally he felt the pressure mounting for another hit.

“Let’s make just one more,” he said he kept telling himself.

He moved to Los Angeles in an effort to get a global career going in earnest, an ocean away from his native South Korea, where he was both a fixture of the music charts and a source of comic relief on silly television variety shows. But none of the attempts came close to replicating the formula that made “Gangnam Style” a global success.

Psy wasn’t alone in trying to figure out how to reproduce the phenomenon. In South Korea, not only the music industry but government officials and economists, too, were studying just what it was about the tune, the lyrics, the video, the dancing or the man that had vaulted the song to such singular levels of ubiquity.

And in the decade since the song and video first put South Korea’s pop music on the map for many around the world, K-pop has become a cultural juggernaut, expanding out from markets in East and Southeast Asia to permeate all corners of the world.

Artists such as BTS and Blackpink command devoted fans numbering in the tens of millions, and the bands wield an economic impact that rivals a small nation’s gross domestic product. The fervor has spilled over beyond music into politics, education and even Broadway.

Some say Psy deserves much of the credit.

“Psy single-handedly placed K-pop on a different level,” said Kim Young-dae, a music critic who has written extensively about the industry. The song was a “game changer” for the Korean music scene and paved the way for the groundswell of interest and commercial success that the South Korean stars who came after him experienced, Kim said.

Now, 10 years on from his lightning-in-a-bottle moment, Psy, whose real name is Park Jae-sang, is back home in South Korea, where he has started his own music label and management company and is trying to re-create the magic with the next generation of K-pop talent as one of the industry’s tastemakers.

“One of the things I love most about this job is that it’s unpredictable. We say among ourselves we’re in the ‘lid business’ — because you don’t know what you’ve got until you open it,” Psy said in an interview at the offices of his music label headquartered in — where else? — the Gangnam neighborhood of Seoul. “You don’t know which cloud will bring the rain.”

With 10 artists under his wing, including a newly minted six-member boy band, TNX, Psy said he feels immensely more pressure shaping and stewarding other people’s careers compared with when he was responsible for his alone.

And while he can give his budding stars advice based on decades of industry experience, what he can’t do is offer them surefire instructions on making a hit record.

For all the years he has spent thinking and talking about “Gangnam Style,” he remains just as mystified as anyone by its success.

In global terms, Psy and his “Gangnam Style” are the epitome of a one-hit wonder. But in South Korea, he had been well-known as a rapper and musician for a decade before, carving out a path that differed from many of his fellow performers, in that he didn’t count on a boost from his physical appearance or shy away from courting controversy.

He never had the chiseled look sought after in South Korea’s pop music industry, and from the release of his first album in 2001, he became notorious for his blunt, profane and at times ribald lyrics. “I Love Sex” was one of the tracks on his debut album, “Psy from the Psycho World!” which was slapped with a ban on sale to minors at the urging of the country’s Christian Ethics Movement.

Despite — or perhaps because of — his unapologetic, iconoclastic ways, over the past two decades at home in South Korea, the college dropout has consistently logged chart toppers, bestselling albums and sold-out concerts.

“It’s kinda sorta ironic he became so iconic — he went from being occasionally censored to widely celebrated,” said Bernie Cho, president of DFSB Kollective, a Seoul-based creative services agency that offers marketing and distribution solutions to Korean music artists and their labels. “He irreverently winked his way from being the bad boy of K-pop to the golden boy of K-pop.”

For a pop song, “Gangnam Style” also unleashed an avalanche of deep think pieces and analyses on the various aspects of South Korea and Seoul it was said to be lampooning: the hypocrisy of the nouveau riche, the superficiality of its social standards and the inequality exemplified by the opulent Gangnam neighborhood.

Psy insists the song never intended to deliver any profound social commentary — he was just looking to give people a few minutes of mindless hilarity and a reprieve from reality.

If anything, he said, he was poking fun at himself, because he doesn’t aesthetically fit the bill of a posh Gangnam local.

“It’s funny because someone who doesn’t look like he’s ‘Gangnam style’ says he is,” he said.

Initially targeted for development in the 1970s to expand Seoul south of the Han River, Gangnam has became a coveted address where many of the capital’s wealthy congregate and the best schools are concentrated, an educational disparity likely to ensure that the inequalities symbolized by the neighborhood continue into the next generation.

In the years since Psy made Gangnam a globally recognized name, the neighborhood has gotten ever more unattainable for the average South Korean. Nowhere have runaway real estate prices risen as steeply as in the Gangnam area.

“If you say you live in Gangnam, people look at you differently,” said Jin Hee-seon, a former vice mayor of Seoul and professor of urban planning at Yonsei University. “It’s an object of desire and envy.”

Psy, raised in the greater Gangnam area in a family running a semiconductor business, now lives north of the river with his wife and twin daughters and said he spends little time thinking about the place.

What he has recently returned to is his signature live performances.

His concerts are legendary in South Korea for raucous good fun. His music — loud and energetic — is often accompanied by dance moves just as outrageous, requiring him to jump, kick and wave his arms wildly in the air. During his six-city tour this year, his first since the pandemic, he said he was surprised to find his joints and limbs as nimble as ever in middle age.

In his latest album released in April, his ninth, he collaborated with rapper Suga of BTS on a single titled “That That.” In the music video, Suga comically duels — and kills — the blue tuxedo-wearing Psy of the 2012 video. (That video has accrued 369 million views.)

As for the chase of global fame that once drove him nearly mad, he said he’s made his peace with its absence.

“If another good song comes along and if that thing happens again, great. If not, so be it,” he said. “For now, I’ll do what I do in my rightful place.” 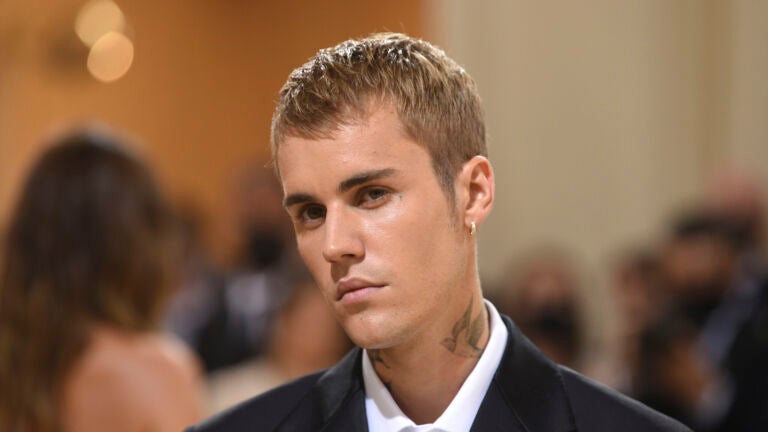 'I thought you'd always be mine, mine': Justin Bieber sells rights to 'Baby,' rest of music catalog