Following a week which saw the leading Republican presidential candidates’ wives become the center of debate, Saturday Night Live was again forced to satirize a campaign that has become, at times, a parody of itself.

The show had Kate McKinnons as CNN anchor Kate Bolduan bring on Cecily Strong as Scottie Nell Hughes, a real-life Trump supporter and TV/radio pundit. Bolduan asked Hughes how she could defend her candidate tweeting an unflattering photo of Heidi Cruz.

(For his part, Trump did admit Saturday that “it was a mistake.”)

“OK, so, no, so, OK, so no, so actually, so that was an accident, OK,” Hughes said, falling back on Trump’s thinly veiled strategy of innuendo, “because Donald’s hands are just so big he can’t see every little tweet his fingers retweet.”

“I mean his hands are this big, flacid,” she added, holding her hands out in front of her.

The interview continued, with the CNN host pressing on Trump’s remarks about women, including his own daughter, followed by Hughes’ falsity-laden, grammar-lacking lines of defense, including a verbatim recitation of Missy Elliott’s “Work It.”

Finally, Bolduan asked about the pattern of violence at Trump rallies. Hughes said the candidate does not “personally condone violence” at his rallies.

But then Bolduan flipped to a live shot of Trump’s rally:

“Clearly, that man had a bee on his face,” Hughes said, “and Donald was just trying to punch it off for him—10 times.” 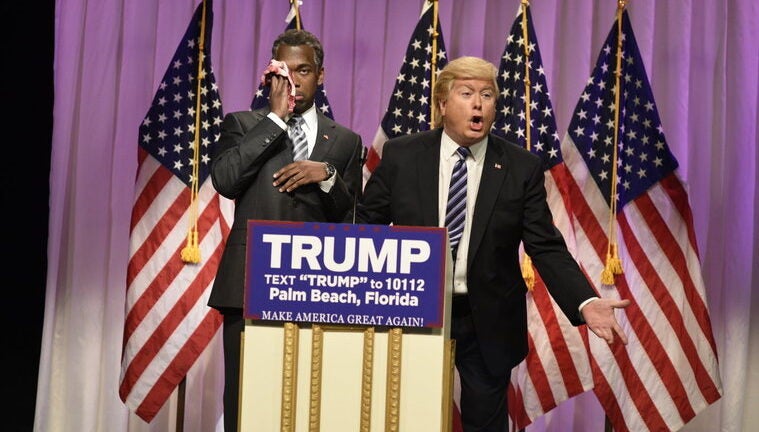