The “Daily Show” host was too focused on the mysterious, dark liquid that began streaming down both sides of Giuliani’s heavily perspiring face.

“Part of me feels bad for Rudy because this was the biggest press conference of his life, his big chance to get Donald Trump another term as president, and his hair ruined the entire moment,” Noah joked on Thursday night’s show. “Can you imagine if Lincoln was reading the Emancipation Proclamation and his beard just walks away?”

While journalists worked to fact-check Giuliani’s latest round of baseless claims in service of Trump’s quest to overturn the election, many others, like Noah, became obsessed with the more pressing question: What was going on with Giuliani’s face?

Was it hair dye? Motor oil? In fact, stylists told the New York Times that it probably wasn’t dye, which doesn’t drip like that due to sweat; their best guess was that he may have used mascara or a touch-up pen to even out his sideburns.

The late-night hosts, though, all had their own theories for what was happening to Giuliani’s face.

“Rudy looks like your printer after you put the wrong ink cartridge,” Jimmy Fallon said on “The Tonight Show.” “What does he use for hair dye, Hershey’s syrup?”

“Rudy dyed his hair, but his head is challenging the results,” said “Late Show” host Stephen Colbert. “Evidently, he had his hair styled at Jiffy Lube.”

“You know your legal strategy is f—– up when even your hair starts crying,” Noah said.

“He was literally dying up there today,” Jimmy Kimmel said. “Isn’t it funny? The ones who shout ‘Fake news!’ the loudest all have fake heads.”

Giuliani’s hair malfunction wasn’t the only part of the bizarre speech that the hosts latched onto. Many noted that the lawyer made a lengthy reference to the 1992 film “My Cousin Vinny” in a long-winded analogy about the distance poll watchers were ordered to keep away from ballot counters.

“Thanks, Rudy,” said James Corden, host of “The Late Late Show.” “Because everybody knows you can’t explain the facts that when things are far away they are hard to see without referencing the 1992 film ‘My Cousin Vinny.'”

The whole spectacle made Fallon feel better about the security of American elections.

“I think our voting system is fine. I think it’s Rudy that’s broken,” Fallon said, who noted that “in the history of insane Rudy press conferences, this could be his masterpiece.”

The hosts couldn’t resist comparing Giuliani’s performance with one of his news conferences earlier this month. On the day the election was called for President-elect Joe Biden, Giuliani was lampooned for holding a press briefing at Four Seasons Total Landscaping in Philadelphia – between a crematorium and an adult bookstore – after Trump mistakenly suggested it would be at a Four Seasons hotel.

“Rudy dried himself up by standing in front of a leaf blower from Four Seasons Total Landscaping,” Fallon joked.

The only thing successful about Thursday’s news conference, Kimmel argued, was the fact that it did not take place in the parking lot next to an adult shop.

“Otherwise, it was a desperate, vomitous attack on every American who bothered to vote,” he said. 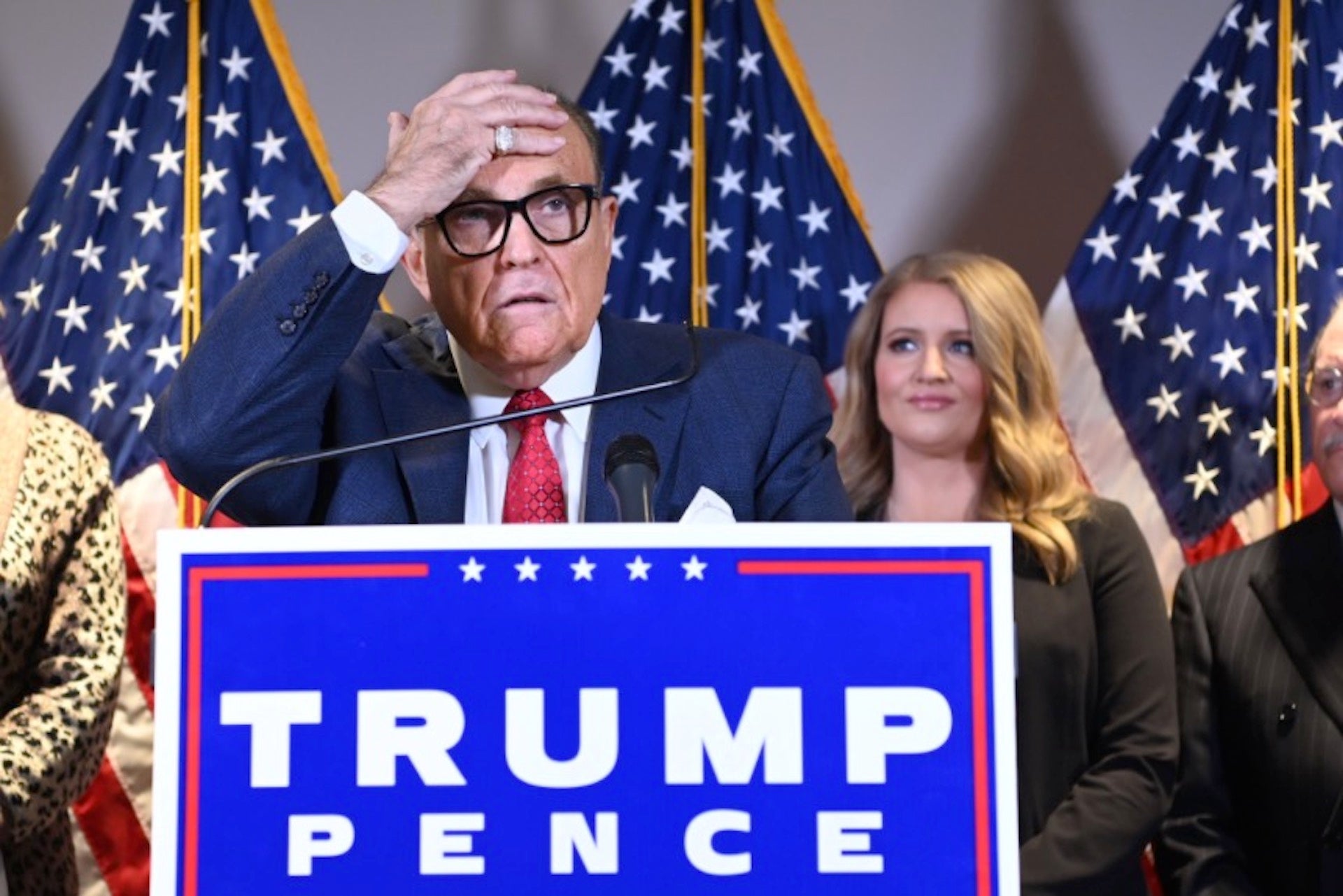 Fact-checking the craziest news conference of the Trump presidency