If you’re using Tinder the way most people use Tinder, you’re probably not reading the bio of every guy who comes across your screen. If you’re not even remotely intrigued by his shirtless abs, you’ll swipe them to the left, sending him into the land of “please don’t ever talk to me.’’

For those of you who are in relationships, enjoying wedded bliss, or if you’ve been living under a rock for the past few years and don’t know what Tinder is, read this.

But if you live in Boston and go through the app, clicking on every dude you see to read their bios in the name of journalism, you’ll find a common thread: Will Ferrell.

There’s an alarmingly high number of men between the ages of 18 to 30 years old in the Boston area who have quotes from Anchorman and Wedding Crashers (yes, Ferrell had a smaller part in that, but one could argue he was the best thing about the film) in their Tinder bios. Because apparently nothing says “Let’s go on a date,’’ or “Let’s have sex with each other’’ like “I have many leather-bound books,’’ or “Rule 76: No excuses, play like a champion.’’

But in the forest of Tinder bios, the tallest tree is a quote from the movie Step Brothers, when John C. Reilly’s character Dale Doback goes to see a therapist.

“I work at a college as a janitor even though I feel like I’m smarter than most of the people who go there. Sometimes I see an equation written on a blackboard, like half an equation and… I just figure it out,’’ says Dale.

“Is this Good Will Hunting?’’ Doback’s therapist asks.

“It sounds a lot like the plot of Good Will Hunting,’’ says the therapist.

And now, lots of men in Boston say this, too. Two examples:

Exhibit A (Yes, Tom Brady is a shared interest.):

Exhibit B (It’s worth noting the spelling of Affleck’s name in this one.):

What better way to hit two nails on the head? These guys are showing their Boston pride while also showing off their appreciation of funny movies.

The most striking thing about these movies choices, other than the fact that Will Ferrell is in all three, is that each one came out between 2004 and 2008. It is now 2015. These movies aren’t new. So why are so many men still identifying with them?

“Probably what it reflects is the popularity of the movies with that demographic,’’ said Margaret McFadden, Professor of American Studies at Colby College in Waterville, Maine.

“How old were these people [when the movies came out]? Teenagers. It forms their sense of humor and sense of masculinity,’’ she said.

These movies dictated humor in the mid 2000s. Everybody quoted them. We were all in glass cases of emotion like Ron Burgundy in Anchorman. We all yelled, “Mom, the meat loaf!’’ like Chazz in Wedding Crashers at our poor mothers, and we all wanted bunk beds to make more room for activities like Dale and Brennan in Step Brothers. (Don’t watch these clips with the sound on at work.)

“You mark yourself by identifying with these texts as somebody who shares that world view; and obviously Will Ferrell is a comedian, so it’s a lot of fun,’’ said McFadden.

But McFadden thinks it goes deeper than that. “An awful lot of those movies are actually about men who care about other men. And so it’s partly about a certain kind of male friendship,’’ she said.

If that’s true, then why would guys put these quotes on sites where the specific goal is to attract women?

“I can’t imagine!’’ McFadden said, laughing. “But in all seriousness, I think it’s because a lot of the guys in the movies are man-boys. They haven’t really grown up, and so there’s a kind of fantasy that [a woman] is going to save them.’’

“Maybe they think that’s appealing to women?’’ McFadden continued. “Maybe they’re saying, ‘I’m a bit of a schmo, but I’m a good guy, and you can save me.’’’

When asked if he thought these movies made such an impression on the men who quote them because they were released during their formative years, Dr. Paul Eastwick, director of the Attraction and Relationships Research Lab at the University of Texas at Austin, said, “Your speculation seems reasonable, and another possibility is that they are hoping to find women who share their sense of humor.’’

But unlike McFadden and Eastwick, the men themselves weren’t super eager to talk about their quote choices:

Maybe the prevalence of these quotes says a lot about this generation’s development, sense of humor, and desires. Or maybe it’s much simpler. Perhaps each of these guys just struck upon the same genius ideas at the same time. After all, the movies are super funny. And as American poet Audre Lorde said, “There are no new ideas. There are only new ways of making them felt.’’

Because quoting obscure poets isn’t worse than quoting Will Ferrell movies or anything. 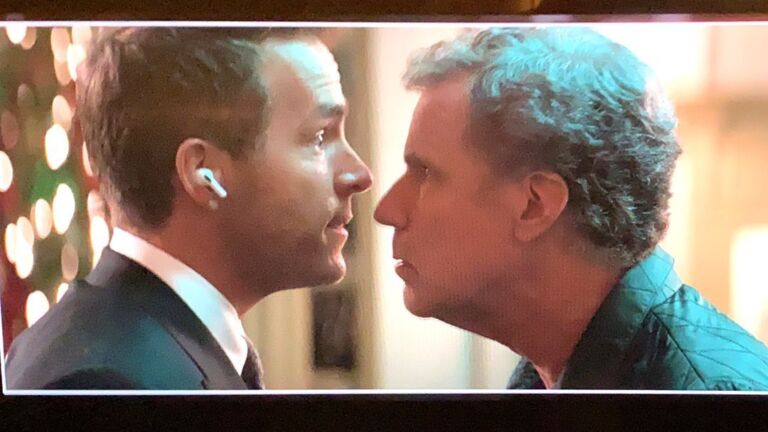 Ryan Reynolds and Will Ferrell begin filming 'Spirited' in Boston