Kati Sorensen-Young has always loved libraries. Growing up on the Cape, she stopped by her local one on an almost daily basis.

“I told my mom after watching Beauty and the Beast that my husband was going to give me a library,” she said.

Though she hasn’t gotten her fairy tale-style library yet, she just got married in one: She and her new husband, Ben Sorensen-Young, were one of five couples to win a free wedding at the Boston Public Library earlier this month.

The Sorensen-Youngs got engaged this past Christmas and were beginning to plan their wedding when a friend sent Kati a link to the BPL’s first-ever wedding ceremony giveaway.

“Cost was a real big issue for us,” said Kati, a social media manager.

The couple was considering tying the knot at a campground, but hadn’t booked anything yet.

“It seemed like a pipe dream to apply to a contest at the library, which is a place we never could have afforded,” Kati said. “And then we got the call.”

All five of the winning couples’ weddings took place separately on the morning of Sunday, June 11, while the library was closed to the public. Each couple was allowed eight guests. The Sorensen-Youngs invited their parents, the bride’s brother, and close friends.

“[The couples] were very excited to be here and get married at the library,” said Emily Tokarczyk, special events manager at the BPL. “It was heartwarming to see, and it was just a very special moment for us, as well.” 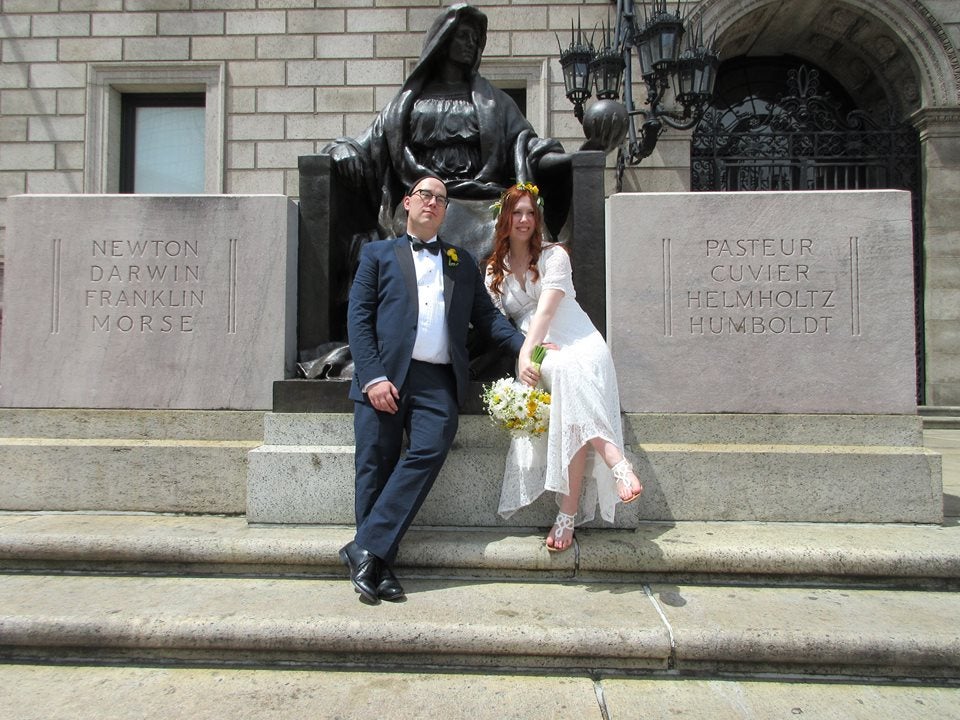 The Sorensen-Youngs on their wedding day.

About 2,500 couples entered the online lottery between Feb. 6 and March 12, Tokarczyk said. The five winning couples were randomly selected and notified by March 13. The prize included food and beverages by The Catered Affair, photography by Angelina Rose, flowers by Artistic Blossoms, ceremony music by Anima Music Management, and an overnight stay at The Westin Copley Place. The library also provided the officiant, Justice of the Peace Thomas A. Welch, and presented each couple with a watercolor print of the library’s iconic McKim Building.

The library hosts about 50 to 60 weddings per year, Tokarczyk said.

“It’s such an iconic location within the city,” she said. “You don’t find many other wedding venues with that much history other than the Boston Public Library.”

“[It] was kind of overwhelming being surrounded by the epitome of western culture and the statues and the books and the beautiful architecture,” Ben said. “It just seemed like a wonderful way to start a marriage.”

Ben, a recovery aide in a rehabilitation facility, said he’s “a big fan” of the library and has attended poetry readings and other events there over the years.

In fact, it was in part the couple’s love of books and libraries that brought them together after they met at a birthday party on the Cape five years ago.

Kati said she couldn’t have imagined a more perfect place for the couple’s nuptials.

“It’s the best luck that I’ve had,” she said, of winning the contest. “Second to meeting Ben.”