I didn’t want an Italian ski lesson, just someone to show me around the 1,200 kilometers of Italy’s Dolomite ski terrain. My husband Greg studies trail maps in advance like engineers pour over blueprints. But he admitted, The Italian Dolomite Super Ski region is confusing with 12 unique ski areas and over 450 lifts, with of course – Italian names we can’t even begin to pronounce never mind find on the mountain. So we hooked up with Cortina’s best instructors, so called Maestro di Sci – sounds so fancy right?!

Paolo and Luca arrived on time, with big smiles and excellent English. We were immediately on our way up the lift to the spectacular slopes of Cortina, the famed ski town that hosted the 1956 Olympics. If you have never seen the Dolomites, they are as dramatic, jagged, and awesome as the Jungfrau of Switzerland. Paolo and Luca were like a comedy routine on the lifts, telling us Cortina’s secrets, about the importance of being chic while skiing in Italy. Luca’s wry humor won me over immediately, and Paolo’s perfectly carved turns as we skied the Women’s’ World Cup Downhill impressed me beyond words. I have skied with some phenomenal skiers and he is among the best. No surprise he skis with Alberto Tomba, starred in Warren Miller’s Vertical Reality and was Sylvester Stallone’s stunt man during the filming of Cliffhanger in Cortina.

We skied long sweeping runs surrounded by the soaring Dolomite peaks, see our Italian ski video, as they guided us with laughs, gorgeous turns and a well-timed lunch at a spectacular mountain chalet where we were greeted like royalty. It’s good to know Luca and Paolo. Turns out they grew up in Cortina, childhood friends, who are passionate about skiing, their village, and their work of instructing and guiding people around their beloved mountains.

Paolo gave me one pointer, but said I was an “elegant skier” – very smart on his part. He selected trails with “emotion” versus those where everybody goes. They posed for pictures, told Italian jokes, made us laugh, made us feel incredibly welcome and took us places we may not have discovered on our own.

In Europe especially, a ski guide or instructor can make your ski experience exceptional. They know where to go, and can cater the day to your liking, a luxury during your precious ski time in the Alps. If you go to Cortina in the Dolomites, consider hiring an instructor/guide, I suggest Luca and Paolo, and tell them I said Ciao! 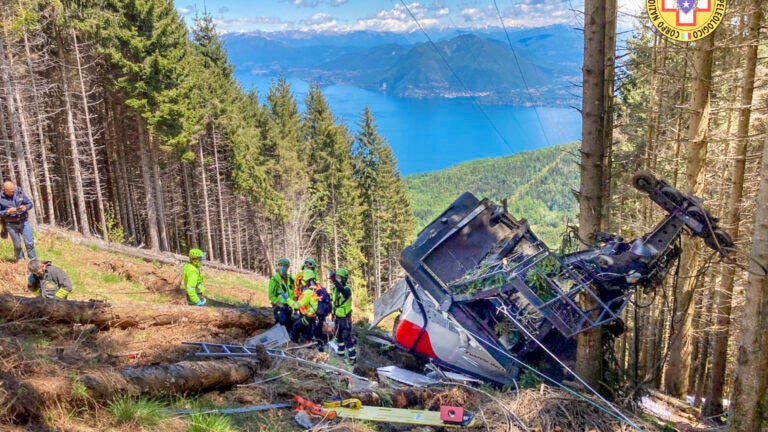 Italian cable car plunges to the ground, killing at least 14