How will fans of the holiday classic “Home Alone” respond to its new streaming sequel, “Home Sweet Home Alone”?

More than 30 years after Macaulay Culkin protected his family home from the Wet Bandits, Disney Plus has released a new sequel to the film series, which hit the streaming platform on Friday.

Instead of the McCallisters, “Home Sweet Home Alone” focuses on the Mercer family, who inadvertently leave their son Max (Archie Yates, “Jojo Rabbit”) at home while on a trip to Tokyo.

Max, like Kevin, initially celebrates his newfound freedom with piles of junk food. But he soon must pivot to defending the family home against intruders, as a married couple played by Ellie Kemper (“The Office”) and Marblehead native Rob Delaney (“Deadpool”), attempt to steal a valuable heirloom. (Another local actor/comedian, Lexington native Pete Holmes, plays Max’s bumbling uncle.)

That said, a single number can’t adequately capture the range of critical response, and many of the reviews coded as “fresh” or “rotten” by the critical aggregation site have a bit more nuance. To help you judge whether to add the kid-friendly film to your streaming queue, here’s what some of the top film critics are saying, both good and bad, about “Home Sweet Home Alone.”

Guardian critic Benjamin Lee wrote that given the lackluster response from fans and critics, he found the film “surprisingly entertaining,” thanks to a “sharp” sense of humor instilled by the screenwriters and director.

“‘Home Sweet Home Alone’ is a surprisingly entertaining, if wholly unnecessary, sequel, a tangerine where we expected to find a lump of coal. What prevents the film from being just another limp bot-written recital is a surprisingly sharp sense of humour, with a script from the Saturday Night Live duo Mikey Day and Streeter Seidell and direction from Borat’s Dan Mazer, a more comically adept behind-the-camera team than one would expect from a Home Alone sequel.”

Adam Graham of the Detroit News had similar praise for Seidell and Day’s script.

“A little bit of the Looney Tunes-style violence goes a long way. But the script by ‘SNL’ vets Mikey Day and Streeter Seidell is consistently funny without the painful pratfalls, and Delaney and Kemper (along with Kenan Thompson, ‘Veep’s’ Tim Simons and Devin Ratray, Buzz from the original ‘Home Alone,’ reprising his role) keep the laughs clipping at a steady pace. “

The A.V. Club’s Katie Rife gave “Home Sweet Home Alone” a C, and spent the bulk of her review writing about how the plot functions as class warfare, admitting she didn’t have anything else to write about because “there’s not really much else going on.”

“You’ve got knowing dialogue about how it’s futile to ‘remake the classics,’ of-the-moment references to Alexa-type devices, eye-rolling hipster jokes, and a pat ending where everyone learns a little something about the true meaning of home. And there’s a montage of Max living large on his first day alone in the house—a sequence that, unlike most of the movie, is actually kind of cute.“

Amy Nicholson of the New York Times called “Home Sweet Home Alone” a “painful” film more concerned with entertaining nostalgic adults instead of children that fails at both.

“Who’s the real victim here? The audience — yet Kemper’s no-nonsense pixie who suffers a dozen thumbtacks to the face runs a close second.”

Courtney Howard of Variety criticized the filmmaker’s decision to make Kemper and Delaney’s villains somewhat sympathetic, as they attempt to save their home from foreclosure by reclaiming an antique doll worth six figures they believe Max has stolen from them.

“While this might seem like an ingenious way to reinvigorate a long-run-into-the-ground franchise where a child faces off against bumbling burglars, this Disney Plus offering maddeningly fails to lean into the aspects it so desperately and ambitiously seeks to change. Mean-spirited, downright sloppy and awkwardly unfunny, this rote feature reboot lacks holiday cheer.

Kate Erbland of IndieWire also found “Home Sweet Home Alone” to be uneven, criticizing its decision to make the child protagonist a jerk and the villains to be sympathetic.

“Most of that weirdness is baked right into the film’s basic premise, which dares to ask: What if our plucky kid was kind of a jerk? And what if our crazed robbers actually had a good reason for committing crimes? And what if this family-friendly comedy included jokes about O.J. Simpson’s checkered past? What follows is an uneven mishmash, the most ill-planned holiday potluck, as ‘Home Sweet Home Alone’ attempts to balance protagonists and antagonists, good guys and bad guys, adult humor and kiddie stuff, all topped with plenty of winks at the first film.” 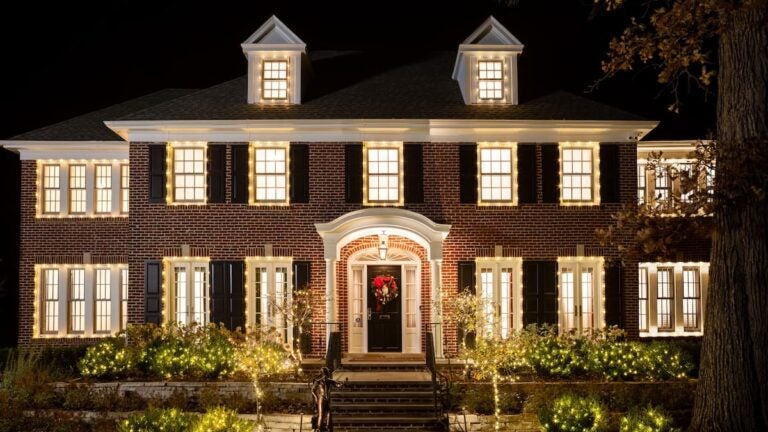 Want to rent the 'Home Alone' house? It comes complete with booby traps and a tarantula.