Many horror fans will be overjoyed to hear that “Halloween Ends” is the final entry of the long-running film franchise to be directed by David Gordon Green (“Pineapple Express”). The director and his comedy co-writing pal Danny McBride (“The Righteous Gemstones”) took John Carpenter’s franchise in a divisive new direction with “Halloween” (2018), “Halloween Kills” (2021), and now “Halloween Ends,” exposing many of the townspeople who masked killer Michael Myers has long terrorized as monsters in their own right. If you weren’t fans of the first two Green films, you probably won’t love “Ends,” either. Laurie Strode (Jamie Lee Curtis), Myers, and an appropriately menacing Carpenter-composed soundtrack are the only threads tying “Ends” to the 1978 original. But if you approach “Halloween Ends” with an open mind, you’ll appreciate the bold new directions Green has taken the franchise, even when the storytelling gets a little jumbled along the way.

How to watch: “Halloween Ends” is streaming on Peacock.

Few directors can claim a greater impact on the medium of film than master of suspense Alfred Hitchcock, whose works are oft-imitated but rarely topped almost a century after he helmed his first feature. The most enduring and influential of Hitchcock’s works is 1960’s “Psycho,” a groundbreaking film that birthed the slasher genre, introduced the world to a new kind of villain in Norman Bates, featured one of the most iconic film scores ever, and pioneered camera techniques that still inspire awe more than 60 years later. Fans of Hitchcockian horrors can also stream “The Birds” on Peacock.

How to watch: “Psycho” is streaming on Peacock.

“The Silence of the Lambs”

Not since Norman Bates in “Psycho” — or maybe Jack Torrance in “The Shining” — has America been entranced by a villain like Hannibal Lecter. In just 16 minutes of screen time, the charismatic cannibal played by Anthony Hopkins fires off one memorable quote after another, entrancing audiences and fascinating FBI investigator Clarice Starling (Jodie Foster), who seeks Lecter’s help in capturing another serial killer (Ted Levine). The only horror movie to win a Best Picture Oscar, and only the third film in history to sweep the Big 5 Oscar categories (Picture, Actor, Actress, Director, Screenplay), “Silence of the Lambs” can be enjoyed in October with a pumpkin beer or any other month of the year with a nice Chianti.

How to watch: “The Silence of the Lambs” is streaming on Amazon Prime Video and Paramount+.

Searching back through our What to Watch archives, you can find recommendations for several great horror anthology shows, including “Midnight Mass,” “Castle Rock,” and “American Horror Story.” If you’ve already watched all of those, consider “Black Mirror,” a British import that is the closest modern-day equivalent to the twisted parables of “The Twilight Zone” — even more so than the 2019 “Twilight Zone” remake. Many episodes focus on technology’s corrosive influence on society, but others point the finger directly at humanity itself. Standout episodes include “15 Million Merits,” which stars an early-career Daniel Kaluuya (“Get Out”), and “Be Right Back,” featuring a pre-fame Domhnall Gleeson (“Ex Machina”).

How to watch: “Black Mirror” is streaming on Netflix.

Marvel dipped its toes into the horror genre for the first time earlier this year with Sam Raimi’s macabre “Doctor Strange in the Multiverse of Madness.” Now it’s going all-in with “Werewolf by Night,” an amusing and occasionally frightening homage to Universal monster movies from the 1930s and ’40s like “Frankenstein” and “The Wolf Man.” Speaking of werewolves, Gael Garcia Bernal (“Old”) has a lot of fun playing Jack Russell, the lycanthrope referenced in the film’s title. Jack and a collection of monster hunters are in a contest to gain control of an ancient artifact known as the Bloodstone, and none of his fellow contestants know Jack’s wolfish alter-ego. Classified as a television special, “Werewolf” is really halfway between a movie and a TV series; at a brisk 53 minutes, it’s the perfect bite-sized Halloween entertainment.

How to watch: “Werewolf by Night” is streaming on Disney+. 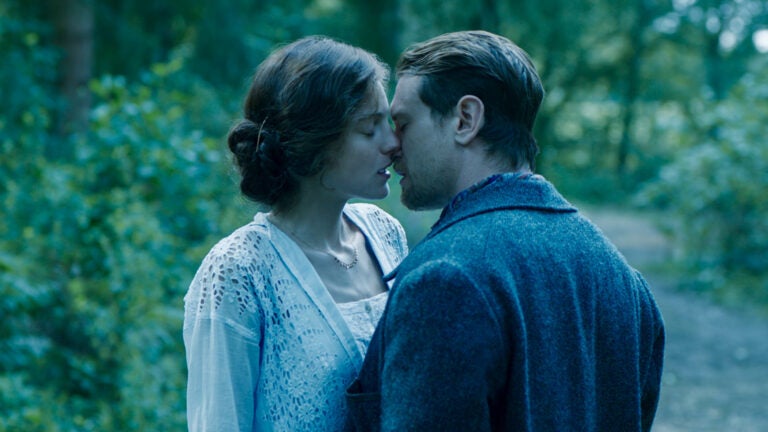