On Thursday night, Stephen Colbert gleefully held up a stack of paper bound with metal fasteners that rivaled the thickness of a dictionary.

“If you just returned to this dimension from the Phantom Zone, I want you to know that today the Mueller report was released,” Colbert said.

Just hours earlier, a 448-page redacted version of special counsel Robert Mueller’s report on Russian meddling in the 2016 election was made available, sending journalists, politicians, members of the public and, of course, late-night hosts scrambling to digest its dense contents and figure out the implications for President Donald Trump. In the weeks since Attorney General William Barr put out a brief memo last month that summarized the report and cleared Trump of colluding with Russia, the president has crowed that Mueller’s findings amounted to a “total exoneration.” (Barr’s summary made clear that Mueller did not draw any conclusions on whether Trump obstructed justice.)

“You know how for a couple years now you’ve been thinking, ‘There’s probably bad stuff in the Mueller report that makes Donald Trump look terrible,’ but then something like three weeks ago Attorney General Bill Barr put out his four-page valentine to Donald Trump, and then you thought, ‘Maybe I’m crazy?’ ” Colbert asked on Thursday. “I’m here to tell you, you’re not crazy.”

On Thursday, late-night comics armed with information from a report described by The Washington Post’s Devlin Barrett and Matt Zapotosky as “a thick catalogue of misconduct and mendacity that, if not criminal, is deeply unflattering,” unleashed on Trump and Barr.

While the lengthy report contained accounts of Trump repeatedly ordering his staff to hinder investigations and lie to the public, a handful of sentences on Page 290 caught Colbert’s attention. The page described Trump’s reaction to news that Mueller had been appointed to investigate him.

After reading the quote aloud, Colbert paused, appearing to mull over Trump’s words.

“I’m guessing that’s not how an innocent person reacts,” he said, before launching into a fictional conversation. “‘Honey, it’s late, where have you been?’ ‘Oh my God, this is terrible. This is the end of our marriage. I’m f—–.'”

TONIGHT: It’s Mueller time and, wow, set some time aside because this thing is 400 pages long! #LSSC pic.twitter.com/HHWx9lpRlT

Trump’s quote also didn’t go unnoticed by the official Twitter account of “The Daily Show with Trevor Noah” and Jimmy Kimmel. (Noah is on hiatus this week.)

“When a witch hunt starts and you a witch,” “The Daily Show” tweeted.

“Of course, he was wrong,” Kimmel said about Trump on ABC. “It wasn’t the end of his presidency and it’s us that are f-ed.”

When Trump posted a “Game of Thrones”-themed tweet gloating about “NO COLLUSION” and “NO OBSTRUCTION,” the late-night crowd didn’t hesitate to call him out.

Kimmel wondered if Trump even knew it was a reference to the popular HBO show, but added it was more likely that the president thought the picture had been snapped “in the steam room at Mar-a-Lago.”

“I don’t know if he’s celebrating the Mueller report or 4/20,” Jimmy Fallon joked on NBC.

Colbert, however, had a different theory about the photo’s dramatic background.

“That picture, by the way, is Trump posing next to all the smoke William Barr just blew up his a–,” he said, slipping into his impersonation of the president. “Mmm, it’s like incense. I smell like a brisket.”

Barr and his Thursday morning news conference, during which he insisted there had been “no collusion” before the report was even released, was another source of fodder for the hosts.

“The attorney general is supposed to be independent, not an apologist for the White House,” Kimmel remarked.

The show then played an edited clip of Barr speaking to reporters about collusion. Midway through his sentence, Barr ripped off his face to reveal White House press secretary Sarah Sanders, who started blaming collusion on Hillary Clinton.

Colbert was even harsher on Barr, slamming him as a “feckless stooge,” and accusing him of having “skipped a few pages when he was summarizing.”

“If you’ve got nothing to hide, why do you have to set up the report first?” Colbert said. “Officer, before I open the trunk of this car, I’d like to first give a short speech about what you’re about to smell.”

Meanwhile, Fallon was fixated on another person at the news conference: Deputy Attorney General Rod Rosenstein, who appeared to become catatonic as he stood behind Barr.

“I don’t even think he blinked,” Fallon said, unable to contain his laughter and disbelief as a camera zoomed in on Rosenstein. “I think someone redacted his eyelids. He looks like Woody in ‘Toy Story’ when the humans are around.”

Over on CBS, Rosenstein’s mannequin-esque behavior was also scrutinized by James Corden.

“The only other time I’ve seen a face like that is when my toddler suddenly doesn’t have to use the potty anymore,” Corden quipped. 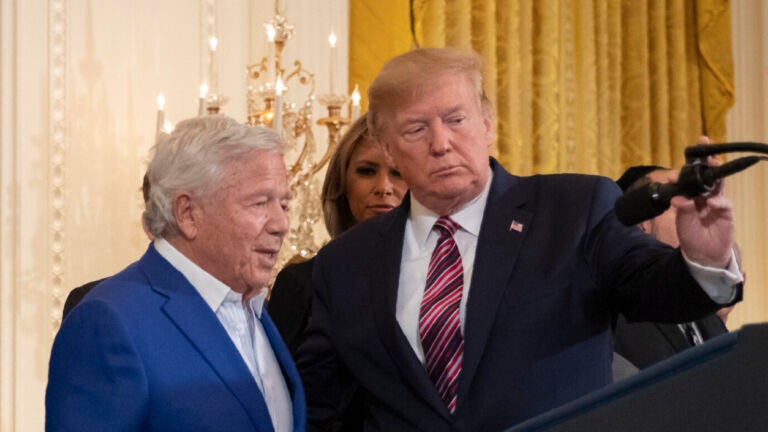