“Free throw shooting is a direct function of childhood loneliness,” cracks Gary Gulman in his HBO special “The Great Depresh” (which premieres Saturday at 10 p.m.).

As the special’s title might imply, Gulman’s long-time love of basketball is one of the lighter topics in play; an engaging, often achingly personal set, “The Great Depresh” centers on the comedian’s recovery from a severe depression he sank into sometime after 2016 special “It’s About Time.”

Gulman found himself unable to get out of bed, he recalls. Cutting between his stand-up and documentary-style scenes with Gulman’s mother, wife, and therapist, “The Great Depresh” (directed by Mike Bonfiglio) recounts the tough few years that would follow, during which the comic moved home and checked into a psychiatric hospital for treatment.

But there’s a happy ending to this story, and “The Great Depresh” serves as a monument to that as well. Gulman spoke by phone about his new special, getting help, and his surprising cameo in this week’s “Joker.”

Q. In this special, you’re very honest about how hospitalization and electroconvulsive therapy (ECT) saved your life. Was it scary to be so vulnerable in a stand-up set?

A. Before [“The Great Depresh,”] I wasn’t really talking about anything other comedians haven’t talked about – seeing a therapist, being depressed. But the warmth and gratitude I received from opening up about those things, even in a very small way, was striking. And as I started to open up about more delicate things – about the hospital, ECT and ketamine treatments, suicidal ideation – the response was even more positive. I realized there was a hunger for this kind of talk. People needed it. Without the audience being so universally positive about this direction my act was taking, I’m not sure I would have found the courage to do it.

Q. After graduating high school, you attended Boston College and became known in the local comedy scene. What did those years teach you about performing stand-up, even about serious topics?

A. When I was in high school, I used to go see comedy with my friends. I would see Lenny Clarke and Don Gavin, Steve Sweeney and Paul D’Angelo, Joe Rogan. And by the time I started, these guys were a couple years ahead of me, and already so good, like Patrice O’Neal and Bobby Kelly, Bill Burr and Dane Cook. They were remarkable. I wasn’t competitive so much as I wanted to be accepted by these guys, so it forced me to take comedy very seriously. There were comedians who were open about things; Barbara Swanson, someone I saw early on who I believe has passed away, talked about her therapy, being on antidepressants. Others were very open about their struggles with addiction and sobriety, getting clean. They set a really good example of being honest about things that, at that time, people weren’t discussing in polite company. You didn’t burden people with your issues, but comedians were on the forefront of being open and honest with your vulnerabilities.

Q. In this country, discussions aimed at breaking the stigma around mental illness are happening with increasing frequency, and much has been written about the value of speaking up when you have a platform to do so.

A. Whenever someone like Bruce Springsteen or basketball’s Jerry West opens up about their depression, it’s made me feel less guilty about feeling the way I do. I was convinced if I worked hard enough, and accomplished something, I’d then feel good about myself. So for people like them to say they were accomplished and depressed dispels that myth.

Q. Was there some liberation to “The Great Depresh,” then, in being as vulnerable as you are?

A. My therapist has stressed this to me for probably 10 years: if you’re an open book, people won’t have anything you’re ashamed of to hold over you. You won’t be concerned something’s going to come back. I remember my freshman year of college, in 1989, I would sneak in and out of the college mental health counseling services. I didn’t want anybody to know I saw a therapist; that included every single friend, a girlfriend I was close with for three out of four years of college. I developed an elaborate lie. I would tell her I had this appointment to discuss my financial aid. And it was just such a flimsy lie. It embarrassed me I had to lie to this person I was very honest with. Looking back on it, it’s very sad. She wouldn’t have cared. The feedback from audiences has been beyond liberating; it’s been exhilarating.

Q. Many comedians struggle with mental illness; most work it into their punchlines. Why do you think that is?

A. In stand-up, there’s self-medicating going on for some of us. It’s always a chicken-egg thing, but when I tell a joke and people laugh, I feel pretty good. I imagine there might be some kind of dopamine blast or chemical release going on. I wonder if comedians are drawn to this because it gives them those good feelings at least while they’re on stage. When I crack the code that is a punchline, or make an interesting connection with a sentence, it gives me a very good feeling, of pride and creativity and productivity. I go back and forth. I don’t know if comedians are maybe more likely to be depressed, but they’re definitely more willing to talk to strangers about their feelings. Comedians are risk-takers; they don’t mind making people feel uncomfortable with truth.

Q. You appear in “Joker,” released this past week, as a stand-up comic performing in Gotham City. How did that come about?

A. It’s surreal and uncanny that my special about mental illness comes out a day after the clown-mental-illness movie of the century so far. The way it happened was pretty wild; I just got a call from my agent saying I was going to be in the “Joker” movie. I hadn’t auditioned for it, and I’m certain if I had to, I would have choked. I’m such a huge fan of Batman and the Joker in particular. I’ve always connected with him. This one comic, “The Killing Joke,” had the idea that he was a failed stand-up, and that was part of his demise, that he wasn’t great at stand-up so he turned to a life of crime. I could completely identify with that, that stand-up is so frustrating at times you want to throw everything out the window.

Q. The film, through Joaquin Phoenix’s character, explores how people with mental illness can fall through the cracks of the health care system.

A. I haven’t seen it yet, but I have a feeling from one trailer, where he’s just in anguish in a therapist’s office, that this man was desperate for help. There’s been a real problem over the years with the lack of mental health services for poor or homeless people. They are the direct result, unequivocally, of our lack of mental health care for all. It’s not because they won’t get a job or are lazy. These are very sick people. “Joker” is a Hollywood movie, so I don’t know if it’s there to be an editorial on the system. But I think it has a valid commentary on how we treat those of us who are suffering and in desperate need of care.

Q. In making a special about mental illness, what other TV shows had you seen that addressed that topic?

A. The last series I saw that was set in a mental hospital was a season of “American Horror Story,” and that was a horrific depiction of mental illness. But I really thought, going back to HBO, that “The Sopranos” had a for-the-most-part terrific depiction of therapy, as well as the effectiveness of talk therapy and medication. In one episode, Carmela (Edie Falco) goes to a therapist separate from Tony (James Gandolfini), and the man turns out to be the only completely moral character on the show. He’s an older therapist; he tells her to leave her husband and take the kids. He won’t accept any money, because it’s blood money. I’ve worked with therapists like that.

A. Right, yes, that’s what I’m trying to get across. [laughs] No, but during this interview process [for “The Great Depresh”], someone asked to speak to my therapist from college. And he said, “That’s not something I can do. I don’t want anyone thinking their therapist will blab about them 20 years down the road.” These people are really professional and knocking themselves out to help people and destigmatize mental illness.

Q. What advice would you give to others living with mental illness?

A. There were some times over the years where I’d say, “I don’t feel great, but it’s manageable.” But when you start to notice it, that’s when it has to become your priority. I remember when I was a freshman in college, a psychiatrist told me, “If this is not treated and taken seriously, it will affect every relationship you have, every job you have. It will filter everything you see and have an effect on every experience in your life.” I didn’t know he was telling me the most honest and truthful thing I would ever hear. 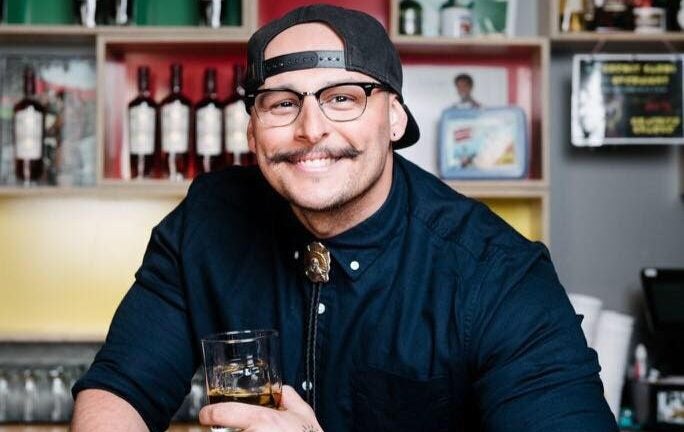