“Saturday Night Live” opened its third episode of the 45th season with a satirical take on CNN’s Equality Town Hall.

After Chris Redd’s Sen. Corey Booker dodged a question from the audience about derogatory comments the presidential candidate made toward the gay community in 1992, South Bend, Indiana, Mayor Pete Buttigieg (Colin Jost) took a question about how he responds to people who don’t think he’s “gay in the right way.”

“I’ve heard that, but there’s no wrong way to be gay,” said Jost as Buttigieg. “Unless you’re Ellen this week.” The jab referenced recent criticisms lobbed at talk show host Ellen DeGeneres, who was photographed at a football game with former president George W. Bush and later defended their controversial friendship.

Kate McKinnon’s Sen. Elizabeth Warren clapped back at an audience question prodding at how she’d respond to someone who’s old-fashioned and believes marriage should be between a man and a woman.

“I would say, ‘Sir, tell me your bus stop, because I want to know where you get off,'” McKinnon said as she replaced her wire readers with purple-tinted shades. “What else, what else,” she continued, pacing the stage. “If someone doesn’t want to serve gay people at their small business, I bet that’s not the only thing that’s small.” And lastly: “When people say gay and trans people shouldn’t be included in the Civil Rights Act of Protections — well, I wish their parents used protection.”

Porter introduced Lin-Manuel Miranda’s Julian Castro, “from the House of Urban Deliciousness,” asking Miranda’s Castro how he would bring queer voices into his cabinet if elected.

“Well, first of all, gracias,” Miranda responded. “As a Democrat, I want to apologize for not being gay. But I promise to do better in the future. However, I am Latino, which we can all agree is something. Look, I’m young. I’m diverse. I’m Latino Obama. So, let’s get that hashtag going.”

“Is there anything else you’d like to say?” Moffatt’s Cooper asked.

“There was once a man who left his mark on the nation’s history, but never became president,” Miranda said over the intro score of “Hamilton,” his Tony-winning Broadway musical. “I was going to say Al Gore!”

Woody Harrelson’s Joe Biden made a comeback for this cold open, answering to how he’d defend his past support of ‘Don’t Ask Don’t Tell.’

“Let me answer that by telling you a false memory,” Harrelson said as he trailed into a rambling story. “Who’s nervous about this story? Show of hands,” Harrelson polled.

Harrelson concluded by turning to Moffatt and asking, “Ever been kissed by a VP before?” 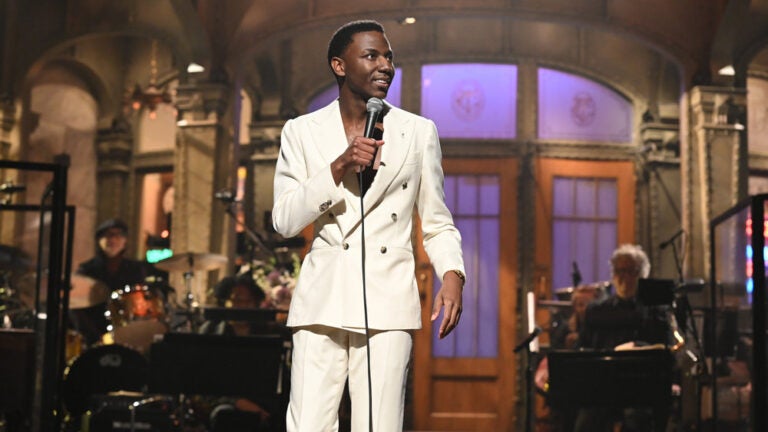