Set in a high school cafeteria, the sketch pokes fun at Trump’s various disputes with foreign leaders over the course of the summit in London. Trudeau, Macron, and Johnson sat down at the “cool kids table,” after Fallon’s Trudeau told Romania’s leader to “scram.”

The trio gossips about Trump’s meeting with photographers, where he spoke for 45-minutes.

“Is this seat taken?” Baldwin asks, and the trio shuts him out, suggesting he sit with the Latvian representative (played by Alex Moffat).

Trudeau, Macron, and Johnson discuss throwing a party at the Buckingham Palace, prompting Trump to re-approach their table.

“There will be quality food and small portions. It’s your worst nightmare,” Rudd’s Macron tells Trump.

The trio tells German Chancellor Angela Merkel (played by Kate McKinnon) they saved her a seat.

“Is this happening? Am I actually about to sit at the cool kids table? Should I bring my flugelhorn?” McKinnon’s Merkel said before joining the table.

As Trump returns to his table, Cordon’s Johnson tapes an “Impeach me!” sign to his back.

“They’re just kidding around, they love me,” Trump said, as he dabbed his tears with two cheeseburgers.

Trudeau, Macron, Johnson, and Merkel laugh at Trump, before the scene fades out and Melania Trump, played by Cecily Strong, enters.

“Bullying is a serious problem, especially against President Tump. It’s not nice,” Strong’s Melania said. “He would never do it to you. So please, European leaders, ‘Be Best,'”

She then plugged Peloton: “Are you a scared woman who’s trapped inside a mansion? Why not imagine biking away from it all on Peloton.” 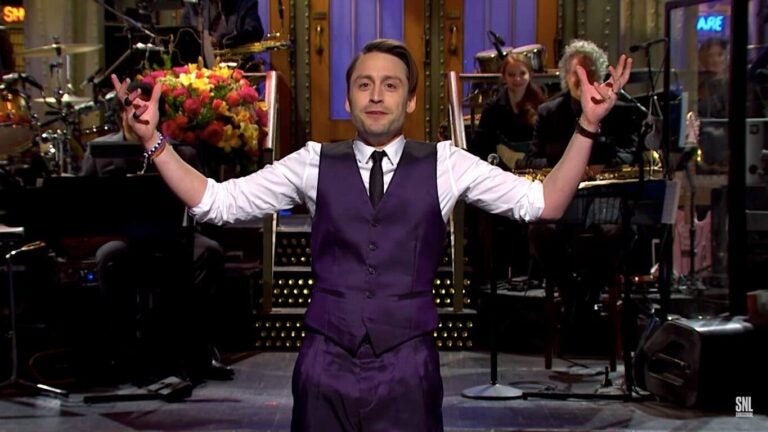 The best moments from Kieran Culkin’s hosting of SNL