LOS ANGELES (AP) — Amid the ruckus over the new host of “Jeopardy!”, contestant Matt Amodio has methodically scooped up resounding victories and a place in the quiz show’s hall of fame.

As of Thursday, the Yale University doctoral candidate in computer science had $547,600 in 17 games, winning in such decisive fashion — and with nervy bets — that runaway games were not uncommon.

The cash total puts him at No. 3 on the list of top winners for regular-season play, edging ahead of Jason Zuffranieri ($532,496) and in the company of “Jeopardy!” luminaries Ken Jennings ($2.52 million) and James Holzhauer ($2.46 million).

Amodio said his restrained on-camera demeanor reflects his competitive focus. As for his repeated use of “What is…” instead of alternatives such as “Who is…”, that’s part of his effort to limit “unnecessary moving parts” that might undermine his play.

If Amodio’s streak holds through the season’s end on Friday, he will return Sept. 13 for the show’s 38th season. That’s when the late Alex Trebek’s successor, Mike Richards, takes over as host, his selection dismaying some “Jeopardy!” fans who’d rooted for other candidates. One of the contenders, actor Mayim Bialik, will host prime-time “Jeopardy!” programs to come.

Amodio, a native of Medina, Ohio, was self-effacing in an interview with The Associated Press, praising the contestants he’s bested and calling himself “incredibly fortunate.” He cited insight gained from the quiz-show film “Slumdog Millionaire” and offered his view on whether a photographic memory is a real thing. Remarks have been edited for clarity and brevity.

AP: How did you became so knowledgeable about so many different topics?

AMODIO: I like to read. I think that you can’t do it without reading. So on a regular basis, I just fall into a rabbit hole of Wikipedia links, (and) every article opens up 20 more things that I have questions about it. This is just how how I spend my day, or my nights when I’m done working. I did change one thing for preparation for the show, though, because I don’t necessarily find culture to be super-interesting. I’m a historian at heart and I like learning about culture maybe 40 years, 50 years later. I like looking at it in the rearview mirror.

AP: Any specific categories that give you pause?

AMODIO: I feel like it’s a bit like “Slumdog Millionaire,” where every question that comes up, the guy has a a personal connection about how he knows the answer. I’m not necessarily the biggest opera fan in the world, but my grandpa lives and breathes opera, so just through talking with him I found I absorbed a lot. And there are other things like that as well. I’m a really big baseball fan, less interested in other sports, but my friends have always been very big basketball, football, hockey fans. I found I had a pretty good vocabulary for that just through collateral exposure.

AP: James Holzhauer’s performance raised speculation about whether he had a photographic memory. Would you claim that for yourself?

AMODIO: From what I have read, I’m skeptical of the existence of photographic memories. Personally, I don’t think I have a different memory than any other person. I may have just a little bit better recall. When other people describe how they remember things — or more importantly, how they forget things — I can totally relate.

AP: You ring in very quickly but seem to take a long beat before answering. Is that a strategy?

AMODIO: Yes. I’m a big believer in measure twice, cut once. I’m very worried that I’m going to know it, or I’m going to think I know it, and then say it. And if I just took one extra second to pause and doublecheck my work, I would have the correct answer. So it’s just out of an abundance of caution. I’m not going to let hastiness turn into sloppiness.

AP: There’s been instances when you’ve made viewers nervous with really big bets. How do you decide when to go for it or hold back?

AMODIO: I never endanger the game. The No. 1 priority for me is being able to play the next day. So I never want to make a bet just looking for more money in a way that would risk the outcome of the game. That being said, in general, I know more than half of for example, the final (‘Jeopardy!’ answers). In a gambling setting, if you have a better than 50% chance, it makes sense to put all your marbles in there and in the end, in the long run, it’ll work out. Now, unfortunately, I might not get to see the long run, so maybe it won’t even out. 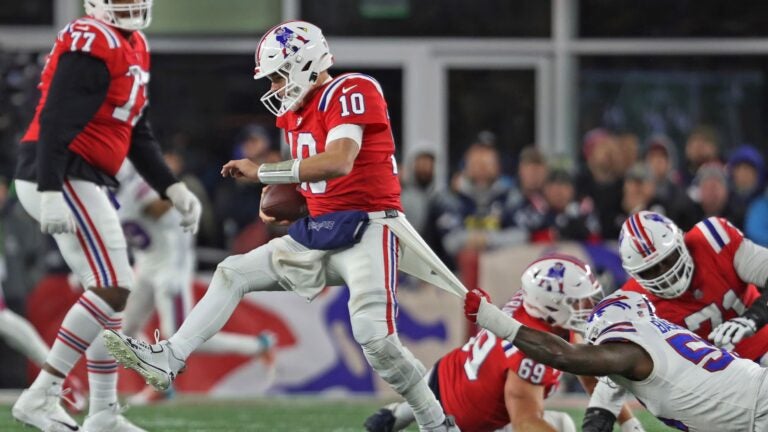 In the ultimate compliment, the Bills put on a Patriot-like performance