Trevor Noah, the South African comedian who took over the hosting reins of “The Daily Show” after the departure of Jon Stewart seven years ago, announced Thursday that he would be leaving the program.

“We’ve laughed together, we’ve cried together,” Noah said during a taping of the show Thursday that was released before the show aired. “But after seven years, I feel like it’s time.”

Comedy Central said in a statement that the network had been working with Noah “for a long time to figure out how he can maintain the demanding schedule.”

The network added that “with no timetable for his departure, we’re working together on next steps.”

Noah, 38, said Thursday that after presiding over the show for a turbulent seven years — writing jokes about the presidency of Donald Trump, the pandemic and other major news events — he had realized that there was “another part of my life that I want to carry on exploring.” He said he missed touring, going to other countries, learning other languages and “being everywhere, doing everything.”

Noah did not elaborate further, but he has continued touring and releasing stand-up specials throughout his time as host.

Comedy Central said that it was “excited for the next chapter” of “The Daily Show,” but it did not say who would be the next host.

Noah’s announcement will come during the departure of several late-night hosts: In April, James Corden said that he would leave his 12:30 a.m. nightly show on CBS next year. Samantha Bee, an alum of “The Daily Show,” announced that her show would not return to TBS in the fall. And last year, Conan O’Brien said goodbye to his late-night show on TBS.

Noah thanked the network Thursday for believing “in this random comedian no one knew on this side of the world.”

When Stewart left the program in 2015, having spent 16 years transforming the satirical program into an award-winning staple of political comedy, fans eagerly awaited an answer to the question of who would succeed one of TV’s most influential and revolutionary hosts.

The announcement came as a surprise to many: Noah, a newcomer to American television who had been scouted by Stewart and his “Daily Show” staff, was getting a huge and unexpected promotion after just three appearances on the show. (The network had approached higher-profile stars like Chris Rock, Amy Poehler and Amy Schumer.)

The decision to name a 31-year-old biracial comic from South Africa was intended to bring a more youthful, international perspective to “The Daily Show.”

In an interview with The New York Times after the announcement, Noah spoke of being part of “a new young generation of comedians of color, in a space where our parents didn’t have a voice that was recognized.”

But soon after the announcement, Noah became embroiled in a controversy over jokes he had posted years earlier on Twitter about women and Jewish people that some viewed as offensive. Noah responded to criticism at the time, saying that “to reduce my views to a handful of jokes that didn’t land is not a true reflection of my character, nor my evolution as a comedian.”

The network stood behind him. Soon, Noah’s version of “The Daily Show” was off and running, with correspondents from various backgrounds bringing fresh takes to the show.

He joked to The Times in 2015 that since joining the program, the “blackness has tremendously increased at the show. There’s been an epidemic of blackness.” And he recalled the advice that Stewart gave him before starting in his new role: “Make the best show that you feel needs to be made. And trust your discomfort.”

During his tenure, Noah embraced his outsider perspective, commenting on America’s struggles with race, class and other facets of society that he deemed absurd, if not ripe for comedic jabbing.

In 2020, he dedicated entire segments to the Black Lives Matter movement and the people protesting police brutality against Black people, saying in one video that it felt as if there was “no moment of justice.”

He recalled Thursday that he had never dreamed of becoming host.

“I sort of felt like ‘Charlie and the Chocolate Factory,’ ” he said. “I came in for a tour of what the previous show was. And then the next thing I know, I was handed the keys.”

Noah has since shown his serious side. In 2016, he published his autobiography, “Born a Crime: Stories From a South African Childhood,” a raw chronicling of his upbringing in South Africa during and after apartheid.

The son of a Xhosa mother and a Swiss-German father, Noah reminisces in the book about being “half-white, half-Black” in a country where his birth “violated any number of laws, statutes and regulations.”

In May, he performed at the White House Correspondents’ Association Dinner, the first during the pandemic era, teasing President Joe Biden before stopping to remark about having the freedom to do so.

In 2023, Noah will tour in South Africa. He wrote on Twitter this week: “Can’t wait to come home.” 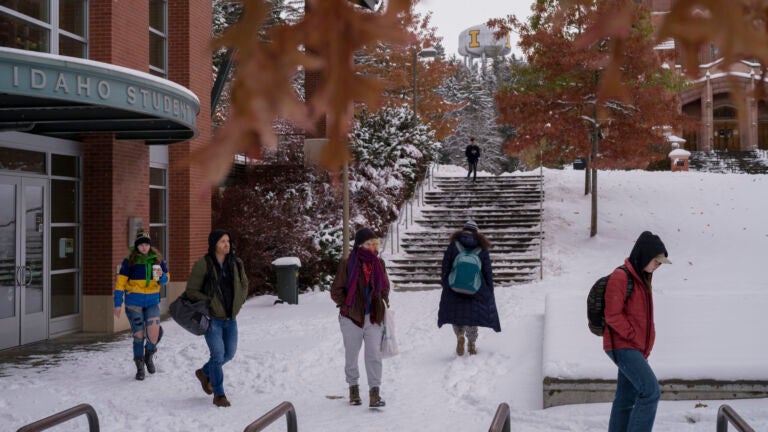 A killer on the loose leaves an Idaho college town shaken