The Boston Ballet opens its 56th season this September with a rendition of “Giselle,” a Romantic ballet the company hasn’t staged in ten years.

While the onstage debut of Griffin, a rescued Irish wolfhound and Berlin resident, will undoubtedly steal Act One’s hunting scene, it is Giselle who rules this timeless ballet whose story is ripe for these times, too.

Hints of #MeToo whir around this tale of an innocent girl seduced and duped by a powerful man whose intentions were far from honorable.

“It’s interesting how the story will play out in today’s climate,” said Ballet Master Larissa Ponomarenko. The former longtime principal Boston Ballet dancer’s staging of “Giselle” begins its run at the Opera House on September 19.

Giselle, a vivacious young peasant girl, dies of heartbreak after finding her duplicitous lover, Prince Albrecht, is betrothed to another woman. Upon her burial, she is befriended by The Wilis, a roving band of raging women ghosts similarly betrayed by their lovers, and who vengefully force any man they encounter to dance to his death. 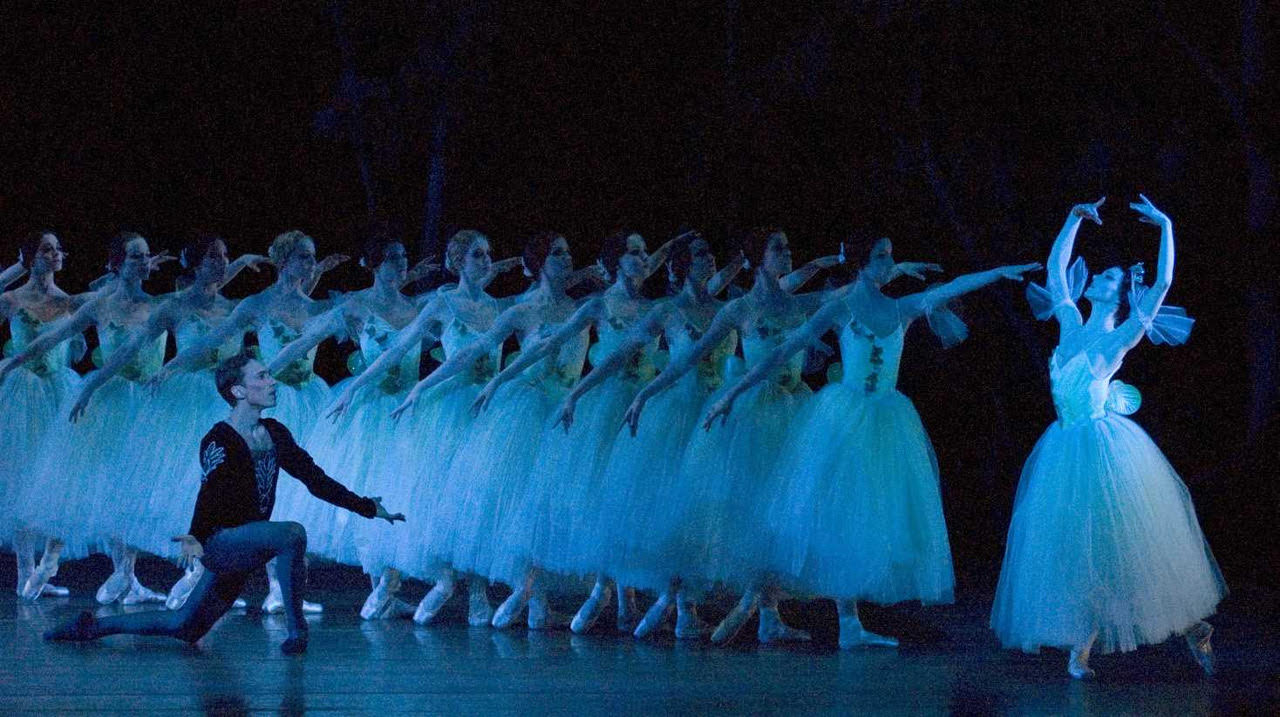 The Wilis from Boston Ballet’s “Giselle” on stage with Roman Rykine.

Whilst The Wilis, led by the bitter Myrtha, presents a strong sisterhood, Giselle does not join them, but chooses to retain her sense of self, even in the afterlife, and not allow a man, or anyone else, define who she is.

Giselle is not only a strong feminine character, she is an individualist, and was created by prolific French composer Adolphe Adam (“Le Corsaire”) at a time when rumblings of female emancipation began to take hold: “Giselle” made its triumphant debut in Paris in 1841.

“Giselle is such a strong character,” agreed Ponomarenko in an interview during a day-off from rehearsals. “She first breaks free from the confinement of her home, of her mother. She breaks out of her familiar world and seeks different ways for her life.”

That might not have gone as well as she may have hoped, but tragedy is an element of classical ballet: “Giselle” is a trove of such tropes and Ponomarenko is guiding the Boston Ballet corps into a classic presentation.

Giselle is not an easy role by any means, she added: “It is a strong role for any female dancers to take on. They go through that arc of emotions and the technical differences of transformation from human to spiritual being. It is a milestone for any dancer.”

And she should know. Giselle has been with Ponomarenko throughout her notable career. “I have danced Giselle many, many times,” she said.

“I started in Russia for my graduation performance,” she continued. “My teacher gave me great insight into the story and these classic romantic ballets. He was incredible and it jumpstarted my experience with this ballet, which I hold dearly. ‘Giselle’ is one of the greatest and it has those iconic classic elements at its core, including this relationship with supernatural beings.”

Ponomarenko said she wouldn’t and won’t change a thing.

“The classics should be revered for what they are: It’s like a van Gogh, you wouldn’t change the painting,” she said. “It should stay just like that.”