Once again, the annual activist brass band festival HONK! takes to the streets for a free weekend-long celebration of music, art, and demonstrations to effect positive change.

Led by bands from all over New England, and from all over the world, the festival will wind its way through Somerville, Cambridge, and across the river to Boston for a special finale outside the immigration detention center.

It all begins Friday, Oct. 11, with family-friendly Lantern Parades throughout Davis Square and continues into the evening with a jam-packed — pun intended — performance from an All HONK! Band Revue in Union Square’s Bow Market. On Saturday, Oct. 12, all 25 bands will play full sets around Davis Square. 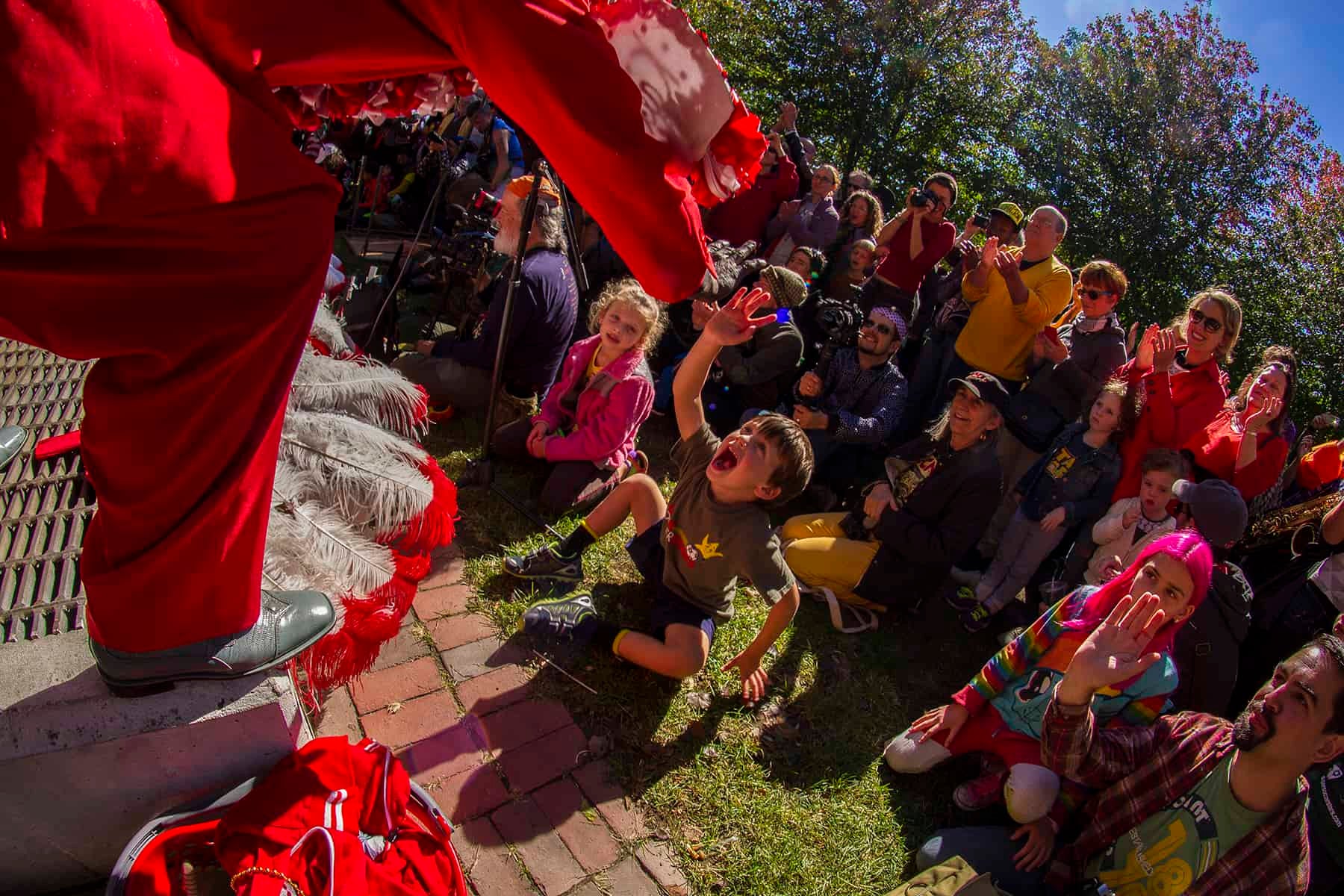 Four newcomers this year are Bolschewistische Kurkapelle Schwarz-Rot, which formed in the former East Berlin in 1986 and is considered the grandfather of modern protest street bands; Chicago’s Clamor and Lace Noise Brigade, comprising of musicians identifying as women or non-binary; Brazil’s Fanfarra Feminina Sagrada Profana, an activist band that focuses on music created by women composers and performers; and the homegrown Summer Street Brass Band, a Boston youth ensemble that notably kicked-off Boston Mayor Marty Walsh’s 2019 State of the City address.

This year, the HONK! Pick-up Band returns: named HOOT and led by musician and committee member Ken Field, music makers not affiliated with a band can sign up for the Friday audition via the HONK! website.

“There are so many musicians who contact us about playing, but they don’t have a band,” said Field. “So, we’ll see who shows up on Friday afternoon. We’ll play on Saturday in the square and if we get good enough we will play in the parade on Sunday. For five years, I’ve led the pick-up band at HONK! Oz in Australia, it’s so much fun.”

Field will also play in the festival’s founding band, the Second Line Social Aid and Pleasure Society Brass Band, too. Since HONK! start in 2006, the amount of bands playing has doubled and similar festivals have sprouted up all over the world.

“Bands come and play HONK! and see what’s possible here and try it in their own cities,” said Field. “The interest has grown incredibly over the last few years and the political climate all over fuels this. Here, Brazil, and in England. We want to make an impact and correct what we feel is a very bad course. It’s hard to know what to do, but we can do this.”

Sunday afternoon sees the HONK! Parade from Davis Square to Harvard Square, where there will be more performances. After which the final act at the immigration detention center in Boston will close out the festival.

None of this would work if the music were not exceptional though, said Field, and it works with brass bands because they are mobile.

“There’s no electricity needed; there’s no drum kit,” said Field. “That’s what makes it perfect for rallies and marches. The instrumentation is naturally compelling; it grabs the attention.”

Whether musician, volunteer, or spectator, Field says HONK! is about being engaged.

“We want to engage the community,” he urged. “It’s an opportunity to be active and not be passive, to participate.”

Everything to know about The Big E 2022