Thursday was supposed to mark the Boston debut of “Van Gogh: The Immersive Experience,” the first of two traveling exhibits dedicated to the Dutch artist set to arrive in the city this year. Due to logistical delays, however, the company behind the exhibit was forced to delay its opening less than 48 hours before its scheduled debut, leaving customers confused and irate at a lack of communication.

On Friday, Fever, the European-based company that co-produced “Van Gogh: The Immersive Experience,” announced that the exhibit will now open on Wednesday, Sept. 29. Customers impacted by the delayed opening would be offered “instant upgrades,” which the company said included the “one-of-a-kind VR element of the experience as well as other additional benefits.”

The impacted customers will also have the option to choose a new time and date to attend “Van Gogh: The Immersive Experience” or receive a full refund.

The company also revealed the “secret location” it has teased for six months, announcing the event will be held at the Strand Theatre in Dorchester, an iconic vaudeville house owned by the City of Boston that first opened in 1918.

“Due to the impact of COVID-19 restrictions on global transportation logistics beyond our control, we have encountered delays in shipment arrivals for the Boston experience,” a spokesperson told Boston.com in an email. “Despite our best efforts to honor the scheduled opening date, ‘Van Gogh: The Immersive Experience’ will now open in Boston at Strand Theatre on Wednesday, September 29th.”

Earlier this week, angry ticketholders emailed Boston.com because the company didn’t initially communicate details of the delayed opening. The news trickled out when an administrator for the Facebook page “Van Gogh Expo” wrote that the exhibit’s Boston opening would be delayed, in response to a comment from a ticketholder. (The Facebook comment was one of dozens on a sponsored post, which does not show up on Van Gogh Expo’s page but still appeared in News Feed as of Thursday night.)

“We are happy to bring our Van Gogh immersive experience in Boston,” the message reads. “Unfortunately, we have had to delay our Boston opening, and reschedulings will be communicated via email with all ticket-holders. The venue will be announced very soon. We appreciate your patience, and we apologize again. Thank you!”

Confusion has run rampant since the March announcement that the exhibit would come to Boston in September.

Many customers were unsure whether they had bought tickets for “Van Gogh: The Immersive Experience” or “Imagine Van Gogh,” a similar traveling Van Gogh exhibit set to open at the SoWa Power Station in Boston on December 21.

After news of the delayed opening of “Van Gogh: The Immersive Experience,” Barry Garber, the co-producer of “Imagine Van Gogh,” issued a statement, encouraging Bostonians to check out the “ORIGINAL” exhibit when it arrives “on schedule” this winter.

“We are thrilled to be heading to Boston for our US premiere with the ORIGINAL  Imagine Van Gogh exhibition in Image Totale,” Garber wrote. “We have sold over 700,000 tickets to date and will open in Boston on schedule at the iconic SoWa Power Station this December. The creators of this exhibition which originated in France have been bringing these beautiful canvases to life since its first showing in 2008 and personally selected the city of Boston for their first US stop on the world tour.”

Also confusing for customers was that Fever was selling tickets for “Van Gogh: The Immersive Experience” through the website SecretBoston.com and on social media as “Secret Media Boston,” despite having no affiliation with Secret Boston, the events-focused community that has been sharing advice on things to do in Boston since 2011.

Michelle McCormack, the founder of the original Secret Boston, told Boston.com in March that she was “inundated” with calls and emails from customers who worried that they’d been duped. (After discussion of legal action by both companies this spring, Fever ultimately rebranded the Secret Boston social pages as “Boston Uncovered” and now runs BostonUncovered.com, while the domain SecretBoston.com is no longer active.)

Customers complained about the lack of information about “Van Gogh: The Immersive Experience” — specifically where the event would be held. For close to six months, organizers teased the exhibit as having a “secret location” that would be announced “very soon.”

On Friday, a representative for Hunt & Gather, a U.S.-based PR firm involved with the Van Gogh exhibit, touted the Strand’s storied history in a statement to Boston.com.

“The Strand is an emblematic theatre with more than 100 years of history that serves as a cultural and educational resource to artists and audiences,” the statement read. “Throughout the years, the Strand has been home to all kinds of entertainment, from music (Tracey Chapman and BB King among others) and music video shooting (Aerosmith, New Kids on the Block) to well-known theatre productions such as Jesus Christ Superstar and West Side Story.”

The company also stressed that it had successfully launched events in several major cities, and expected to do the same in Boston.

“After successfully launching in Atlanta, Dallas, New York, Miami, Philadelphia, and Washington D.C., which saw over 1,300,000 guests total, we are thrilled with the popularity of this experience and look forward to welcoming our Boston visitors,” the statement read. 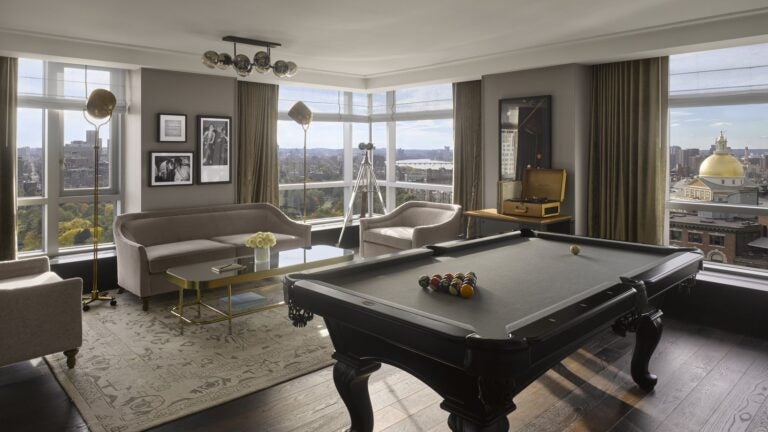 AKA announces new opening of Hotel AKA Boston Common