Notch Brewing, the Salem brewery known for tight session beers and crisp lagers, is opening a second location in Brighton.

Brewery founder Chris Lohring confirmed to Boston.com that Notch’s second brewery, taproom, and biergarten will anchor the Charles River Speedway headquarters, a plot at the intersection of Soldier’s Field Road and Western Avenue that was once home to the stables and offices of a mile-long horse track. The brewery is expected to open in summer 2020.

“It’s got a unique feel, one that I feel matches Notch, from the style of beer that we brew to the way we serve the beer, all the European influences that we like,” Lohring says of the new space.

At Notch’s Salem location, visitors get an experience not unlike one they’d get in Germany or the Czech Republic. Session beers like The Standard, a Czech pilsner, or Zwickel, a German pale lager, are low in alcohol but not forced, adhering to traditional styles. Beers are poured according to custom: you can get a Mlíko pour of Czech lager that’s mostly foam, which the Czechs sometimes drink for dessert.

“There’s a creaminess that happens that you wouldn’t get otherwise,” says Lohring. “The pilsner is dry and snappy. Those two marry really well.”

The Brighton location will feature many of the same beers, including ones brewed on-site. In addition to traditional German and Czech brews, the company has been experimenting with IPAs and other offerings under The Voll Projekt brand. Lohring says you should expect some core Notch beers to transition to Brighton, but not all. 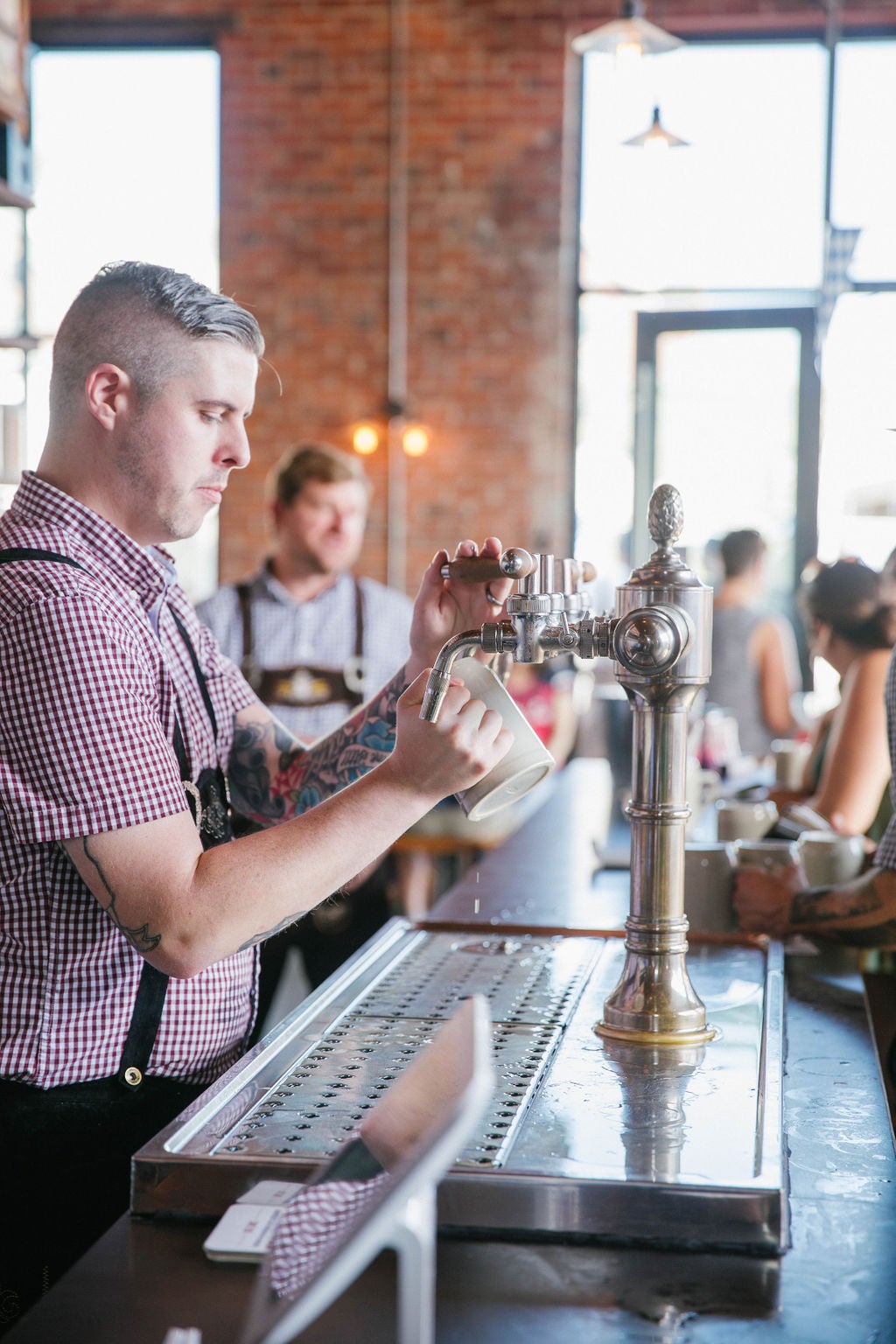 A bartender serves up a pour at Notch’s Salem location.

“We’ll have very familiar beers on,” says Lohring. “Some of the beers we developed in Salem we’ll bring down there, but I think each location will be slightly different. It will give you a reason to go to both.”

The speedway development is headed by the Architectural Heritage Foundation, a nonprofit focusing on historic preservation, and the Department of Conservation and Recreation.   Notch won’t be running a kitchen in Brighton, but the developers expect to offer a full-service restaurant, as well as host other food purveyors. Notch’s space there will allow for about 200 visitors indoors, with room for double that outside, as well as space for special events.

Lohring says Notch will stay true to its roots.

“You’re not gonna walk in and see 11 IPAs on the board, two sours, and a pastry stout,” says Lohring. “We try to do our own thing. Not that that’s not an interesting take, but there’s a lot of me-too going on right now.  We’ve been brewing Czech lagers now for 10 years, as well as German lagers. I think those are the styles that best represent session beer, and session beer culture, in terms of drinking beer in half-liters and liters, drinking in rounds, having beers that are clean and balanced and nuanced.

“We don’t serve beers in flights. There’s not sweet, intense flavors. You can hang back with these beers for a while and not get fatigued. I think that’s the differentiating feature between Notch and other taprooms.”

Lohring’s career has spanned the good, bad, and good-again eras of craft beer. After getting his start at Tremont Brewing in 1993, Lohring saw through the closure of the Charlestown brewery in 2002, and stayed with the brand while it was brewed by Shipyard. After a brief stint in engineering (“pretty boring”), Lohring and his wife, Mary Ellen Leahy, founded Notch in 2010, helping start the second wave of craft that has made tap rooms and graphic-designed tallboy cans ubiquitous.  Notch was the first American brewery to focus on session beer, brews with 4.5 percent alcohol by volume or less, resisting domestic trends to go big with IPAs and other styles.

“I’d be remiss in saying we didn’t take cues from other brewers,” says Lohring. “We just didn’t take them from US brewers. The cues we took from Germany and the Czech Republic. So are we unique? We’re unique to our area. I drew inspiration from traditions that were long established. We didn’t create this.”

Architectural Heritage Foundation is currently marketing the speedway space for restaurant tenants. Lohring intends to shuttle back and forth between Salem and Brighton as the new project gets off the ground.