On September 27, Mystic Brewery founder Bryan Greenhagen posted a message to Facebook and Instagram that came as a shock to local beer fans.

“We are sad to share the news today that Mystic Brewery has decided to discontinue brewing operations and intends to wind things down over the next few weeks,” Greenhagen wrote, adding, “it has been a wild ride.”

Founded in 2011 along with then-upstarts Night Shift and Idle Hands, Mystic helped to usher in the second wave of craft beer here, becoming one of the first breweries to open in Greater Boston in nearly two decades. Many of the beers were Belgian-inspired, including a saison fermented with the yeast found on a Maine wild blueberry that won a gold medal at the Great American Beer Festival.

“We are sort of on that bleeding edge,” Greenhagen told The Boston Globe in 2013.

Mystic’s Chelsea tap room (174 Williams St., Chelsea) is indeed closing for good, with one last hurrah Saturday featuring a triple IPA “designed to be the hoppiest beer we, or any brewery, has ever brewed,” as well as free pizza from nearby Ciao!.

In a phone conversation Thursday, Greenhagen rebutted speculation on what’s forcing Mystic to close, reminisced about some of his favorite moments, and discussed the possibility of the brand popping back up in the not-too-distant future, albeit not in its original location. (Editor’s note: The following Q&A has been lightly edited and condensed for clarity.)

What were the circumstances that led to your announcement?

I think we got caught in that wave, like with what Harpoon did, or Victory in Pennsylvania, where everybody would go to an industrial area and repeat a formula. You’re basically creating a manufacturing factory right in the middle of the city, where there’s really high rents. It comes down to the capitalization that we needed to keep investing in the site. We don’t have long left on the lease, and so it’s time for a change.

We weren’t forced into bankruptcy or anything. It’s just that the conditions, I just don’t see making it work here any further. I’m tying to actually avoid the situation when people show up and the doors are locked.

I was reading a Beer Advocate thread where posters were theorizing as to why you’re closing — location, popularity of Belgian-style beers vs. hazy IPAs, etc. I saw you felt compelled to comment on there. In your words, why did you close?

If you look at those threads, which I did, too, it doesn’t look like users said we had any quality problems. But you do see repeatedly that people say, “I used to go by all the time, but now it’s such a hassle.” It’s an access issue. The traffic keeps people from coming to the tap room, and the tap room is really where all the success we’ve seen comes from. That’s where you know you you’re giving people the freshest product. You’re controlling how they experience it. That’s your home base, and obviously the margins are better.

A lot of people are like, “Well you should never have changed to IPAs or whatever.” And my stance on that is that, if you’re trying to be a brewer, your job is to make beer for people, right? And maybe I don’t mean jumping in on hard seltzer, but to make stuff that people like is what we wanted to do.

I think so many things piled up on us. Part of it is personal — just wanting to move on to new things. I’ve come up with about seven different plans to try to shake it up and keep going, but you just get to a point where there’s no solution to this particular equation.

Last year you were close to securing a new location for Mystic. What happened?

We put a lot of money on assessing numerous different sites. The one everyone knows about was the Malden one, because we actually had a lease on that. But it’s sort of the romance of turning an old building into a brewery, it’s a time-consuming and expensive one.

Basically we have had a lot of deals that would go to the wire, and then you can’t pay $70 a square foot like like a tech company can, and so you have to have sort of a visionary developer, which only here at the end we actually did have a deal with one.

There’s not a lot of motivation to take the lowest bid. All the cities say they want the makers, the breweries, and creators that help the economy. But it’s hard to get a single building owner to take less money just because you’re contributing to the fabric.

Back in 2013, you told me it took about $300,000 to get the brewery up and running. Was there ever a point where you were making good money?

Yeah. At the beginning of last year; we’re doing pretty well. But it’s kind of like trying to make the jump to light speed. You know the “Star Wars” scene where he’s banging on the wall? It’s like you should be able to just go and take off, but you can’t.

But, yeah, things were going absolutely great not very long ago.

You said a lot of people have reached out to you since you announced the closure. Who specifically?

Five of our alumni have become head brewers around the country. A lot of alumni have been texting me, calling. And all the comments you see on Reddit and Beer Advocate.

I think with with Mystic, one thing that I’m most proud of is something like Table Beer. We brew a version called Wave Break, which is really supposed to be a summer beer. But actually one of the last batches we made was Wave Break, just because so many people, including all my staff, is like, “Can we just do that one more time?”

What is your favorite Mystic beer?

Oh, gosh. It’s Ventus, for sure. It was made in the lambic style, but it’s technically an American wild ale. We literally were doing mixed-culture fermentation for years in barrels and then blending it. We are actually trying to get the last batch of that out, and the issue is Idle Hands says they’re going to make labels for us. But since we don’t have time to get labels on but we bottled it, it’s actually been aging in the bottle. There’s actually a few logs of that that are going out into distribution.

That was one of the most handcrafted, patience, everything that makes something stuff good. That one’s got everything turned up to 11.

Do you have any new developments you want to share about what’s next for the brand?

There’s nothing in terms of the bright side that’s been agreed to at this point. There’s been a lot of interest. People have been intrigued and somewhat amazed to the response that we got. People are like “Wow, this brewery was special and maybe a little more unique.”

What about the Von Lune project?

I’ve been looking for breweries to work with to keep doing the Von Lune stuff. That was going really well, and I really enjoy those beers. We wanted to start that side project to do a little bit of a different take on lagers, to be more like the beers from the smaller, farmhouse places in Germany, not the ones made in the big city.

Will you stick with Mystic if the brand continues? Or do you want to see it off?

That’s undefined yet. I’d be happy to be part of it. I’d love to see it continue somehow. 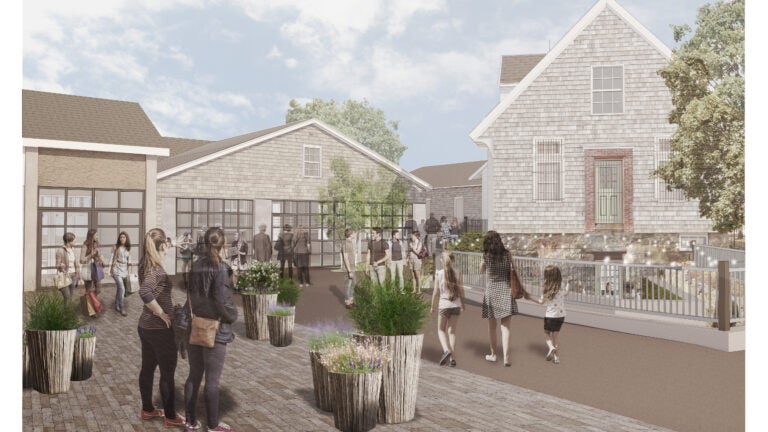 Notch is opening a second brewery in Brighton