Massachusetts fared well: Canton and Boston’s Trillium rated as the No. 3 brewery in the world, followed by Charlton’s Tree House at No. 4, and Framingham’s Jack’s Abby at No. 29. The rankings serve as confirmation that we’re living in one of the epicenters of craft beer.

Several other New England brewers also made the list, led by Vermont’s Hill Farmstead, which ranked No. 1 for the fifth year in a row. The results are democratic, culled from nearly 4.2 million customer and industry reviews, according to a representative from the website. In addition, the past four years of reviews also factored into 2019 ratings.

Here’s what I think RateBeer’s ranking system got right, and wrong, about our local beer scene in 2019.

They listened to you, and they should.

Your vote matters. That much is clear from the results, in which Trillium and Tree House, longtime fan favorites, did very well. This lines up with data from another customer-generated beer-rating website, Beer Advocate, which lists 48 beers total from the two breweries among the best 250 in the world. You really, really like Tree House and Trillium beer, and that’s reflected here.

The methodology of these sites isn’t scientific, and it may be flawed.

Are 48 of the best 250 beers in the world really made by two Massachusetts breweries? Maybe. More likely, Tree House and Trillium have made some excellent beers, some of which you’ve waited in line for (you don’t really have to wait in line much at either place anymore, they’re making plenty), soaking up the good memories you still associate with the brands. Many beer-raters have already seen Trillium and Tree House on previous lists, which can influence future rankings. The lists are heavy on IPAs and big stouts, which while reflecting the style preference of the majority can leave other very good makers of other styles on the outside.

That’s not to say Tree House and Trillium don’t make world-class beer. It’s just that plenty of others do, too, and aren’t being recognized.

There are many other deserving places in our midst.

RateBeer’s top 100 represents only “a small portion of the top 1 percent of brewers worldwide,” so it’s not trying to be completist. But there’s plenty of other world-class beer around. You can sip exceptional IPAs at Exhibit ‘A’, Medusa, and Lamplighter (I’m making a list of underrated IPAs, to be released very soon in another column). Some of the world’s best lagers are brewed at Notch in Salem. Up in Maine, Oxbow may have the best sour beer program going.

Even limiting the range to “places near my house,” I’ve had beers from Mayflower, Stellwagen, Vitamin Sea, and Widowmaker that rival any individual brew from the big two.

I’ll just say it: For my money, Allagash is the single best brewery in the country. No other brewer matches its range of everyday (White, River Trip, Tripel) brews and special occasion (Coolship Resurgam, Farm to Face) beers. The brewery is spotless, the vibe is authentically Maine, and founder Rob Tod, a James Beard award winner, and brewmaster Jason Perkins are the real deal. I can’t help but think Allagash, which came in at No. 34 on the RateBeer list, would rank closer to the top if it brewed 50 different New England-style IPAs . . . 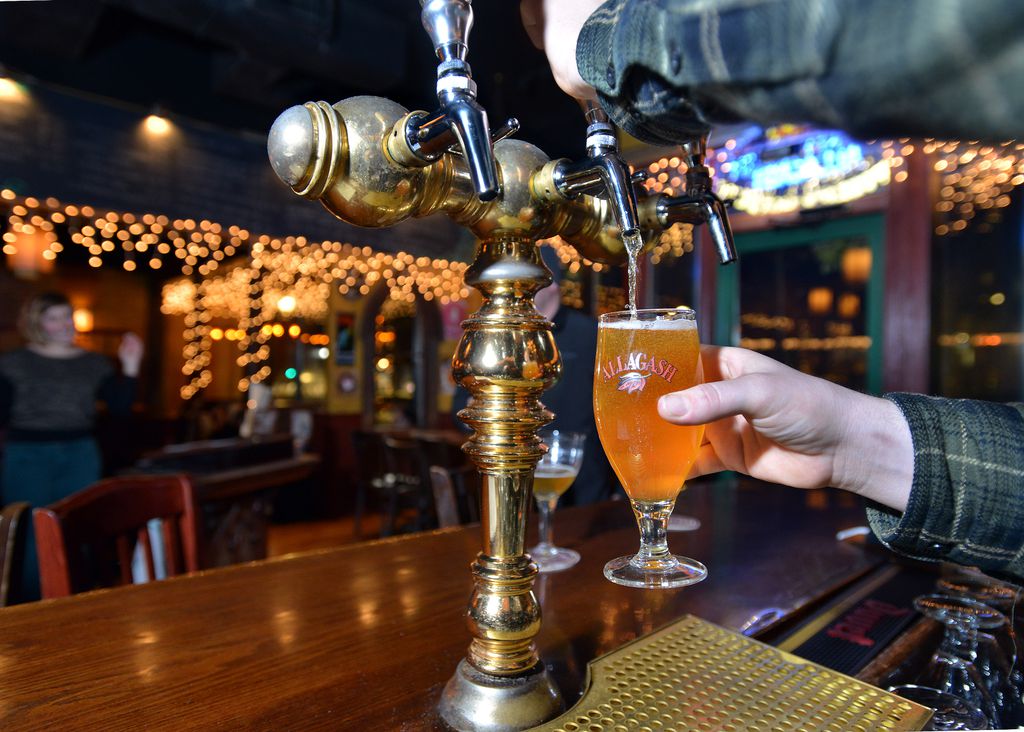 Bartender Brian McGee pulls a pint of Allagash White for a patron at The Publick House.

They got the Hill Farmstead thing right.

Hill Farmstead is as special as everyone says it is. Maybe it’s the remoteness of the place, the simple perfection of beers like Edward and Poetica, or the connection to the land, and by extension good water. Maybe it’s none of those things. Regardless, you should go, because good beer is fleeting, and the best brewery in the world exists only a few hours away.

Many of the non-brewery choices were strong.

Your fellow beer-raters, for the most part, have steered you in the right direction.