Devastated by the forced closures of the last three months, Massachusetts brewers are forthright about the damage already inflicted on their businesses, and the long climb ahead.

“It’s been a kick in the gut,” says Harpoon cofounder and CEO Dan Kenary, who says the company’s revenue is down 35 percent. “Thirty percent of our revenue comes from draft, and that’s gone to zero. We were actually down more than 100 percent in draft sales in May because of returns. I said, ‘Guys, over 100 percent, that’s really frigging impressive.”

“The pandemic has wreaked havoc on CBC,” says Cambridge Brewing Co. owner Phil Bannatyne. “What we thought was going to be three weeks has turned out to be three months. … It’s been heart-wrenching and hard. But I think we’ve done the best we can. We’re standing.”

In interviews since the state began Phase 2 of reopening on June 8, brewery owners described the adjustment to the new normal of outdoor seating, and the scramble that has taken place to welcome guests back.

Technically, Massachusetts breweries have been allowed to be open throughout the COVID-19 pandemic, declared essential businesses by Governor Charlie Baker. In practice that’s meant different things for different breweries. Those that derive more business through package store sales — Night Shift and Harpoon are good examples — have done better. Some breweries, though, from relatively large operations such as Trillium to smaller breweries like Old Planters, see nearly all of their revenue flow through tap rooms. Delivery and curbside pickup have made up some revenue, but not nearly all of that.

At exactly 11:31 a.m on Wednesday, June 10, a young couple, wearing masks, walked up to the host station at Dorchester Brewing Co.

“It was one minute after we opened,” says Matt Malloy, the company’s CEO. “They walked up and said, ‘Our rib order’s already in.’ I said to them, ‘You guys just figured out life.’ And they said, ‘We’ve been waiting two months to sit outside and eat ribs.”

Dorchester Brewing has one of the largest outdoor dining footprints in the city, with capacity for 152 guests on both rooftop and streetside patios. Since opening back up, business has been brisk.

“I think our biggest challenge is managing expectations as it relates to occupancy,” says Malloy. “People think they’re going back to a new world, or the existing world, and it’s different. People are surprised they have to wait.”

To help inform customers of wait times, brewery staff keeps a spreadsheet of table occupancy, the data from which filters into an estimated wait time counter on the website. Reservations are not required, but are encouraged.

The state’s website lists a number of guidelines for restaurants and breweries to be allowed to reopen, which in addition to sanitizing requirements include the closure of bar areas, tables spaced at least six feet apart, and parties of six or fewer at the same table.

“I think we were worried about people not adhering to the mask rule, and everyone has been awesome. We thought we’d have to play the mask police,” says Malloy.

Cambridge Brewing Co., a Kendall Square brewpub known for the quality and experimentation of its beers, has long had a patio. During the pandemic, occupancy has been cut in half from 76. More recently, following Baker’s order on Monday, June 22, a quarter of the restaurant’s 176 indoor seats are also allowed to be filled.

“The other big question mark was whether anyone would come,” says CBC owner Bannatyne. “We didn’t know how comfortable people would be sitting outside around other people. The quick and easy answer is people are very comfortable, and they’ve been more than willing to come.”

Bannatyne says that while the patio might turn over one or one and a half times during a typical evening, they’ve been doing three to four seatings since reopening.

“It’s been very helpful for us,” he says. “People have been very tolerant and patient in filling up those seats. … We’re doing pretty good business.” 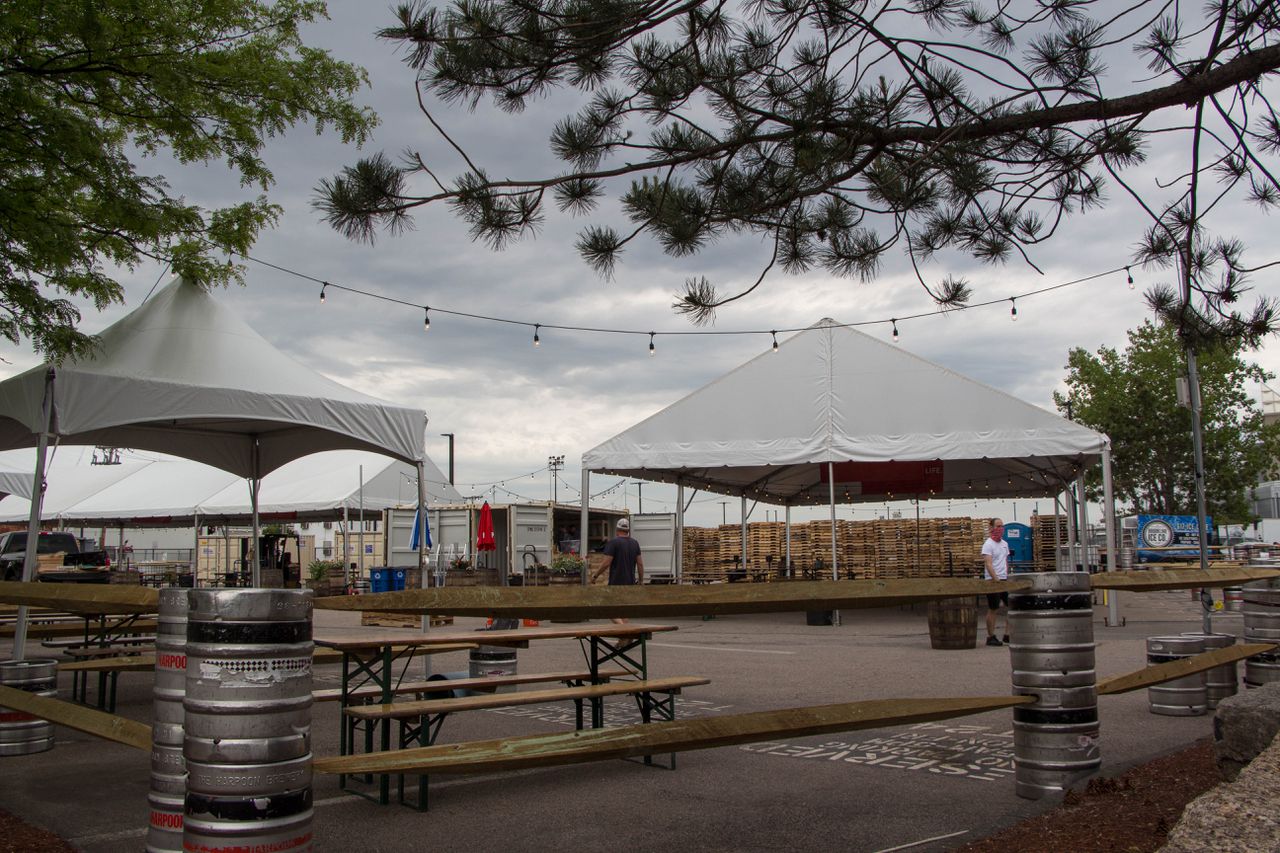 Harpoon transformed a triangle-shaped parking lot adjacent to the Seaport brewery into an outdoor beer garden that can seat 300 people.

On a larger scale, Harpoon has transformed a triangle-shaped parking lot adjacent to the Seaport brewery into an outdoor beer garden that can seat 300 people, which is nearly the capacity of its beer hall inside.

“We are completely sold out until at least Monday,” Kenary said before last weekend. “I have all my kids coming into town this weekend, and believe me, they’ve been reaching out, ‘Dad, we’re trying to get into Harpoon.’”

Other problems and considerations

On the first day Hudson’s Medusa Brewing Co. opened its patio to the public, it poured.

“Rain. Thunder. Beers. Sanitizer. Face masks. PEOPLE!!!” read a message from Medusa’s Twitter account. “It was so good to see people! Thank you for all who came out to the beer garden tonight. Unbelievable. We are so humbled, and we’ll be back at it again tomorrow.”

Rain. Thunder. Beers. Sanitizer. Face masks. PEOPLE!!! It was so good to see people! Thank you for all who came out to the beer garden tonight. Unbelievable. We are so humbled, and we’ll be back at it again tomorrow, but with BARBECUE! https://t.co/juwgOpHx1W pic.twitter.com/ofedkz9hBC

Outdoor seating works in good weather, but is obviously problematic when it rains.

“Every day is a different challenge,” says CBC’s Bannatyne. “We’re patio-only, and last night it poured. We put up tents. This morning we took them down. Everything is harder. And I just don’t see it getting much easier in the short term.” Harpoon also has huge tents set up, for both shade and wet weather protection.

Each of the brewers interviewed mentioned getting staff up to speed and repurposing them in new roles. Reservations are also a challenge.

“We’ve never done it before,” Kenary said. “We’re telling people — and we’re trying to overcommunicate this, because I know if it were me and I was 24 years old, I’d wanna come here at noon on Saturday and be here until they close — we’re basically saying you have a two-hour reservation.”

It should be mentioned that although many Massachusetts breweries have reopened — as of this writing 69 of the state’s approximately 200 breweries have opened back up, according to the Mass. Brewers Guild — many remain closed.

“We’ve been planning to re-open in a way that is safe to both our staff and our guests and provides the most enjoyable experience possible. We’re still working out the details, but we’re excited to let you know that we’re aiming to re-open with outdoor seating on Friday, 6/26,” reads a Twitter post from Marshfield’s Stellwagen Beer Co.

On June 9, Weymouth’s Vitamin Sea posted, “In a continued effort to provide our beer in the safest, most efficient manner for our customers, we have decided to maintain to-go sales only at this time.”

“With what we’re doing, there’s good, better, and best,” says Dorchester Brewing’s Malloy. “We’re barely at good. Are we making money? Probably not really. Are we doing it because we’re a community company? Yeah. Do we want to get our team tips and getting them engaged? Yeah.

“Financially it probably isn’t helping all that much, because we’re having to overstaff and do all that other stuff. But if we can break even or get a little bit north of break-even during COVID times, let’s do it.”

“It’s bringing me back to our first five or so years, when our survival was threatened all the time,” says Harpoon’s Kenary. “It’s kind of back to those entrepreneurial days, which can be kind of fun.”

While other New England breweries are downsizing — Magic Hat announced last week it is selling its Burlington, Vt., brewery — there has yet to be a wave of Massachusetts brewery closures.

“I thought the numbers that people threw out there about how many breweries were going to go out of business was always way, way too high,” says Kenary. “Because we’re an amazingly resilient bunch. Fewer breweries than people feared aren’t going to reopen on the other side of this.” 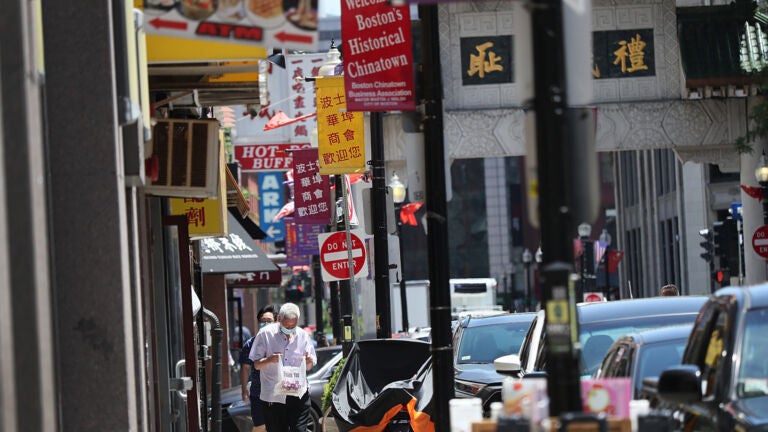 30 years later, the Chinatown Massacre is still a mystery