Embedded into the website of Lynn bakery One Mighty Mill is a crash course on how industrialization significantly altered where our food comes from. On the site, the company’s mission statement reads in the form of a provocative question: “When did flour become so evil?”

If you didn’t come to this article with prejudgments about flour and really just want to get to the beer content, please, the simple but necessary context is this: Fresh-milled flour made on site is the key to the flavor of One Mighty Mill’s bagels, tortillas, and pretzels, all made more nutritious by that stone-grinding process.

It’s those bagels, actually, that prompted Night Shift Brewing cofounder Michael Oxton to explore a partnership with One Mighty Mill. If stone-ground wheat made the baked goods taste so good, why couldn’t it do the same for a beer?

The one catch, and it was a big one, is that brewing beer with middlings, the part of the wheatberry the company is unable to use in bagels, isn’t easy.

“Our middlings are pretty fine,” says One Mighty Mill CEO Jon Olinto. “I had chased a lot of different local brewers to try and use these. You have to want it to work.”

Olinto wanted it to work because as his company has expanded, it’s gone from paying to compost hundreds of pounds of middlings to needing to compost around 2,000 pounds per week. Keeping the organic, locally sourced, nutritious product in the food system would be better.

“In the best situation, 100 percent of our wheatberries would be milled and used in the food,” says Olinto.

After agreeing to partner, Night Shift’s brewing team commenced several rounds of R&D, adding One Mighty Mill’s middlings to small batches of beer and tinkering with the recipes. The beer they landed on, aptly called One Mighty Beer, is a hoppy kolsch landing at 5.6 percent alcohol by volume and brewed with that upcycled wheat.

“We noticed it gives you this super round full body,” Oxton says. “It adds a little extra haze, and it’s like this biscuity — honestly the best way to describe it is fresh bread flavor that’s complemented by whatever else is going on in the beer. With this one it’s giving a little tangelo citrus.”

In more good news for Olinto, Night Shift’s team liked the flavor differences in One Mighty Beer so much that they’re adding upcycled wheat middlings to all batches of their flagship beer Whirlpool going forward. Oxton says he thinks dedicated beer fans will be able to tell the difference.

One more thing to know about One Mighty Beer is that it’s a Whole Foods exclusive. The beer will be available at select Whole Foods stores in Connecticut, New Hampshire, New York, Maine, and Massachusetts beginning this week. 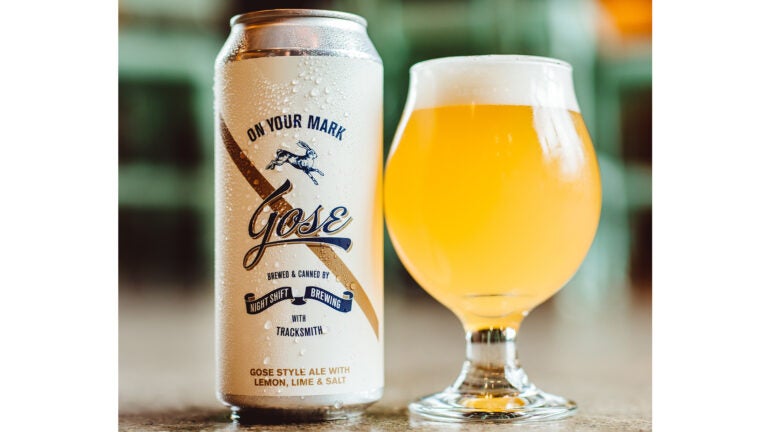 A local brewery made "a beer version of a Gatorade"