Exceedingly patient New England fans and the NFL’s Tampa Bay Buccaneers weren’t the only ones with raised eyebrows when Tom Brady rescinded his retirement announcement on March 13.

Samuel Adams Brewing, which not three days earlier had announced the release of a special beer to honor the retiring quarterback, was suddenly left to scramble. Can you release a beer marking the end of an all-time great’s career if his career isn’t actually over yet?

It turns out you can make it work. This week, Sam Adams is releasing “Greatest of Ale Time,” a beer celebrating Tom Brady’s return to the NFL, rather than his departure from it.

“We know better than to count out a last-minute comeback from the G.O.A.T. himself,” Kelly Bivens, senior brand manager for Samuel Adams, wrote in an email explaining the pivot.

We should be clear that the famously carb-conscious Brady doesn’t endorse the beer, nor does his name appear anywhere in the promotional material or on the packaging. Instead, references to Brady are peppered throughout the marketing copy, such as the fact that the beer will first be available on 3/28, the Super Bowl LI score that led to a legendary Patriots comeback over the Atlanta Falcons, and that the brew is 7 percent alcohol by volume, referencing Brady’s seven Super Bowl rings.

There were 199 cases made of the special brew (Brady was famously the 199th pick in the 2000 NFL Draft), and I was lucky enough to get my hands on some. The beer is a classic orange-bomb (think Brady to Moss) IPA, hazy but not thick, bursting with citrus flavor but finishing dry. There’s typical Sam Adams restraint and balance here, which means it’s pleasant to drink.

This isn’t the first time Sam Adams has made a Brady brew. Back in 2019, the brewery released a beer called “Too Old, Too Slow, Still Here” ahead of the Patriots’ eventual Super Bowl win over the LA Rams. Like with that beer, availability for this one is limited. While all 199 cases sold out on the presale date, Greatest of Ale Time is available on draft for a limited time at the Samuel Adams Boston Brewery and downtown Boston taproom beginning on March 28.

This month, Everett’s Night Shift Brewing celebrated its 10th anniversary. Ten years ago, founders Rob Burns, Mike O’Mara, and Michael Oxton poured their first tasting at Kappy’s Fine Wine & Spirits in Medford. Early Night Shift devotees will remember the gritty surroundings of the company’s first brewery. Today, Night Shift is the fifth-best selling craft brand in Massachusetts liquor stores, and their pale ale, “Whirlpool,” is No. 1. One of Night Shift’s original brews, “Viva Habanera,” is available now on store shelves, and “Birthday Brownie,” a pastry stout brewed for the anniversary, can be purchased at brewery locations in Everett and Lovejoy Wharf. 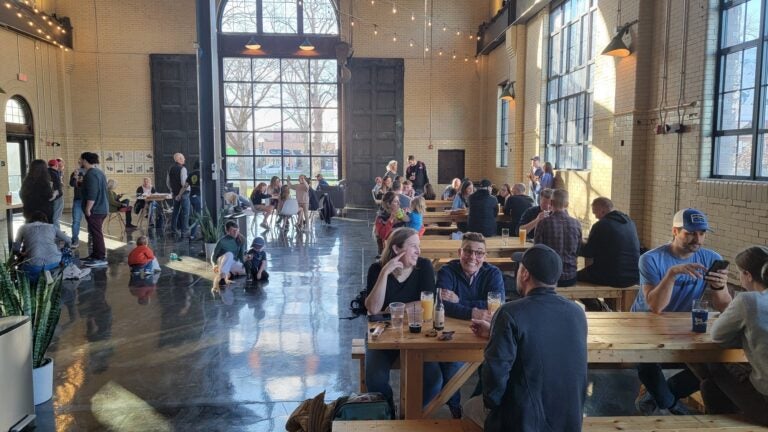