Back in the late ‘90s, if your kid played sports in a youth league in Quincy, there’s a decent chance his or her team was sponsored by “Quincy Ships.”

That brewery employed Tod Mott of Harpoon (and later Portsmouth Brewery) fame, and was well known on the South Shore despite its relatively short 15-month run. After opening in 1999, Quincy Ships closed when the building it was operating in was sold by its landlord, leaving one of the biggest cities in the state without a brewery just ahead of craft beer’s explosion in popularity.

“If they had been able to stay there, with the timing, they might have been massive now,” says Jay Southwood, president of Break Rock Brewing, which opened this year.

Break Rock is now open in Marina Bay, but Southwood is quick to point out that while his is Quincy’s only current brewery, he knows it’s not the city’s first. And to make that crystal clear, Break Rock is holding a pass-the-torch event this week honoring Quincy Ships.

For Break Rock’s head brewer and co-owner, Vilija Bizinkauskas, forging that connection makes perfect sense. Bizinkauskas, who was friendly with Mott through both brewers’ time in the beer industry, reached out.

“I said, it would mean a lot for me, Tod, if my first collaboration in the new brewery was with you,” says Bizinkauskas.

The brewers settled on recreating a beer, Quincy Ships’ Abigail Adams Amber, that won Mott a Great American Beer Festival gold medal over 20 years ago. Mott, who currently owns and operates Tributary Brewing in Kittery, Maine, dusted off his original recipe and drove down to Quincy to help with the brew day.

Nicknamed “3A,” Abigail Adams Amber is “based on an Irish red, but with a little bit more American influence in the sense that it’s higher in alcohol,” says Bizinkauskas. Back in the day, Mott and his team used to bring home some of the malt used to brew the beer and stick it in the oven to toast it. The availability of more specialty malts allowed the brewers to skip that step this time. The final product is a medium-bodied, easy drinking amber ale of 5.5 percent alcohol by volume.

Break Rock is hosting a launch party for the collaboration on Thursday, July 21, from 6 to 8 p.m., and the nostalgia won’t stop with the beer. Some Quincy Ships memorabilia, including a hockey jersey, has made its way into the Break Rock breweries’ possession.

Launch party aside, Break Rock is a welcome addition to the beer scene south of Boston. The brewery sits on the ground floor of a mixed-use building on a pier in Marina Bay. On a recent Saturday, the tap room was filled with patrons dressed for summer who clearly didn’t want to waste any of the nice weather being somewhere else inside. 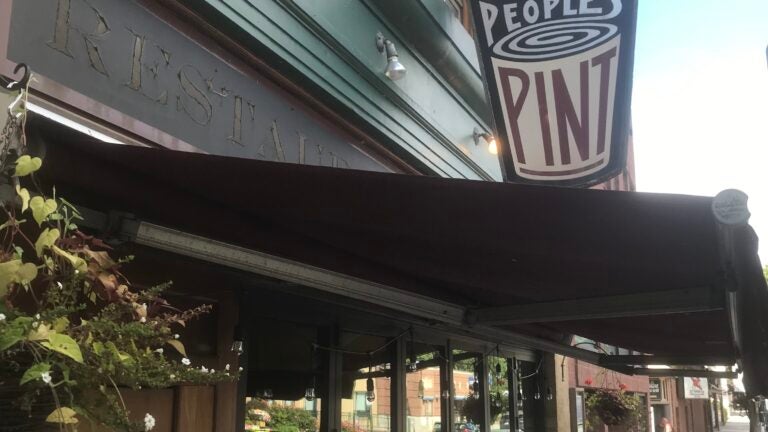 Celebrating 25 years of The People’s Pint