As dreary as the weather will be this week, it’s the perfect setting for a dark and blustery Halloween, which lands on Sunday this year. And unlike last year, the pandemic isn’t keeping as many trick-or-treaters indoors, with most doctors agreeing that going door to door for Halloween candy is a safe activity. So which candies are you planning to hand out this year?

In order to avoid being the “bad candy” house, we asked our readers: What’s the best and worst candy to give out on Halloween? More than 1,300 readers weighed in, choosing from our list of coveted candy and regrettable treats, plus adding a few options of their own. If you haven’t bought candy for trick-or-treaters yet, consult our poll results below before heading to the store.

Among the list of 10 popular treats on the best candy poll, Reese’s Peanut Butter Cups took home top prize with around 38 percent of the votes. It’s hardly a surprise — the love for the peanut butter and chocolate morsels have been reflected in national polls as well, and our readers were quick to sing its praises.

“Reese’s PB Cups are perfect,” said TJ C. from Hanover. “They are salty, sweet, and satisfying.” (TJ is not, however, a fan of the Butterfinger, which he called “a petrified Reese’s.”)

“The Reese’s cup is and has been the gold standard for Halloween candy,” said Andy from Wrentham, while Jessica from Boston’s North End noted that “Unless you have or live with someone who has a peanut allergy, Reese’s are always the go-to Halloween candy. Even the orange wrapper is festive.”

Judy H. from Marshfield agreed: “Peanut Butter Cups are the perfect marriage of chocolate and peanut butter, with that flip of salt.”

“Almond Joy is the best!” declared Helen in Wakefield. “I love coconut, chocolate, and almond together!”

But what about peanut allergies?

While Reese’s Peanut Butter Cups were a reader favorite, some made the case for leaving them out of the candy mix altogether. The reason? Peanut allergies, which are the most common food allergies for children under 18.

“Kids will be kids during Halloween and you can’t expect parents to be able to go through every single piece of candy WHILE the child is trick or treating and might sneak a bite or two,” said Dianne from Charlotte, N.C. (and a former Revere resident). “Play it safe and don’t give out candy that has peanuts or could be cross contaminated in a facility with peanuts. READ THE LABELS AND THINK SAFETY FOR ALL!”

“As someone with a peanut allergy, looking in a bowl of candy and only seeing candy I can’t eat is disappointing,” shared another reader. “Even if it’s not the best type of candy, having nut-free candy options are still better than no candy.”

Margaret from Billerica shared that Nerds are her favorite Halloween candy because “there are no allergy issues with them,” and Emily from Hopkinton recommended Kit Kats, “because it is chocolate-y but is somewhat allergy-friendly (no nuts). … Non-candy items can actually be done well (pre-packed popcorn, cookies, pretzels, etc.) and, again, can be an allergy-friendly option.”

Ok, so what’s the worst Halloween candy to give out?

Here’s a hint: They’re peanuts, but not really.

Circus Peanuts — which aren’t actually peanuts, but are instead peanut-shaped marshmallow candy — received 21 percent of the votes for worst Halloween candy.

“Circus Peanuts live in an elusive gray area between styrofoam and pure corn syrup,” said Frank from Wrentham. “A marvel of chemistry, perhaps, but nothing you want in your candy bag.”

Other candies that sent a shiver up readers’ spines? Anything that wasn’t actually candy (like apples) received 20 percent of the votes, the always-polarizing candy corn got 17 percent of the votes, and both licorice and Raisinets garnered 11 percent of the votes for worst candy. Readers also submitted their own ideas for terrible treats, giving a thumbs-down to Massachusetts-based Necco Wafers, popcorn balls, Butterfingers, Mars, and Dum-Dums.

So how can you please everyone? A mix of candy, it seems, is the way to go: Peanut Butter Cups as a crowd-pleaser, plus peanut-free candies like Twix, M&Ms, and Kit Kats. Avoid Circus Peanuts, apples, and popcorn, and offer candy corn if you want to start a passionate debate.

Mike from Needham had another tip: “Give real candy bars, not the half-sizes, and you’ll be a neighborhood legend.”

And who doesn’t want to be a neighborhood legend? 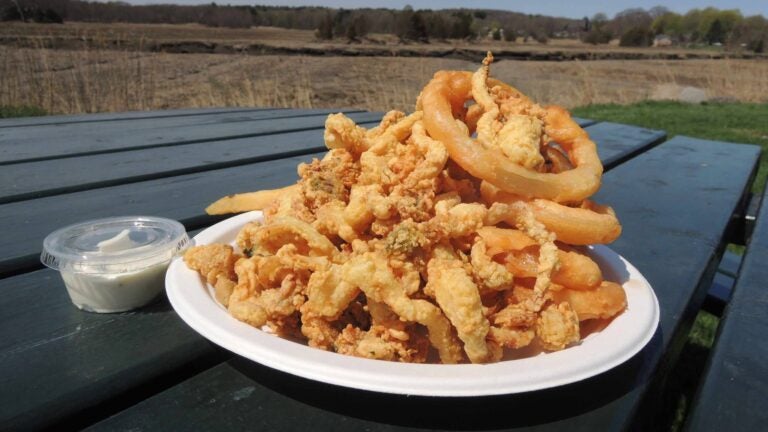 The results are in: Readers name the most iconic restaurant in the Boston area