Imagine, for a moment, that the dine-in ban has lifted. That we live in a world where restaurants welcome diners to do more than grab a bag of takeout. Picture brunches with friends and post-work drinks with coworkers and birthday dinners and everything like it used to be.

Now hold that thought. The coronavirus public health crisis has already left a monumental mark on the restaurant industry, and when we are allowed to dine out again — whether that resumes on May 5 or beyond — it will be far from business as usual.

In talking with numerous chefs, owners, and industry experts, they seem to agree on a few things: The reopening of restaurants in Boston and throughout Massachusetts will take place slowly and with care. Reliance on delivery and takeout will continue long after it’s essentially our only option. And the total number of restaurants will likely be fewer than prior to this crisis.

But there may be a light at the end of the tunnel. Here’s what industry insiders had to say about what awaits us when the open signs finally flicker back on.

Restaurants will reopen in phases. 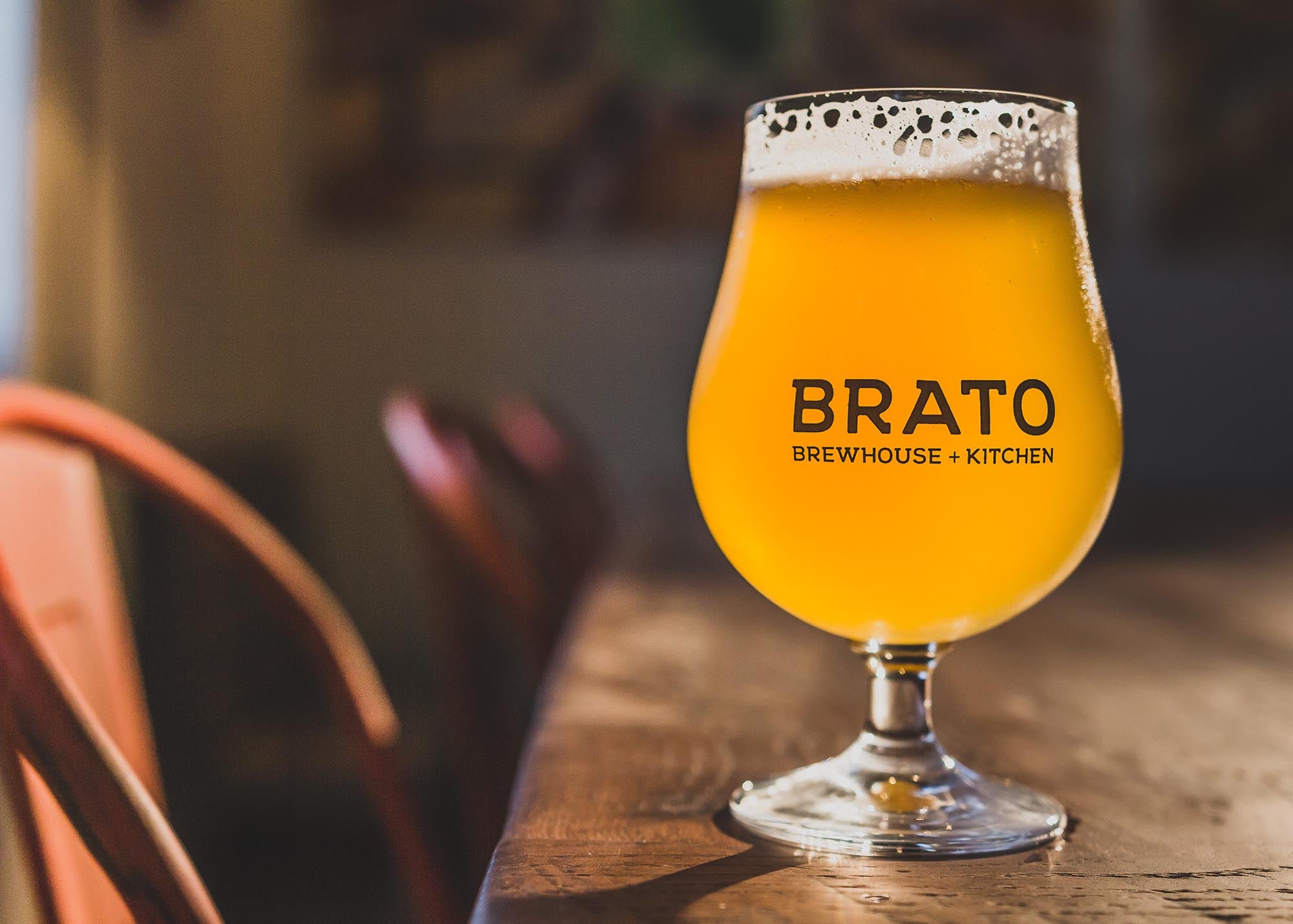 If you think you’re going to waltz into a restaurant with five friends for a rowdy Sunday brunch once the ban lifts, think again.

“It goes without saying that reopening is probably going to happen in multiple phases,” said Bob Luz, president and CEO of the Massachusetts Restaurant Association. “Initially it’ll be very restrictive.”

Luz said the association has been working with Gov. Charlie Baker’s office, as well as the restaurant associations within the coalition of seven Northeastern states, to formulate a recovery and reopening plan, which will likely occur in three phases.

In phase one, expect limits on seating capacity. Tables will be spaced farther apart, menus will likely be single-use, and hosts and diners will be encouraged to wear masks while checking in. Luz also said that when restaurants are first allowed to reopen, diners may be required to make reservations with a time limit, and he expects walk-ins won’t be allowed. Dining with someone you haven’t been quarantining with might be out of the question.

“We envision a questionnaire that guests will have to go through,” Luz said. “It’ll probably be families or related individuals [who can dine together] to start with. Phase two would start to ease that.”

Phase two might also bring closer tables and larger seating capacities, while phase three could allow walk-ins, the reintroduction of buffets and self-service, and an overall scene that more closely resembles the one that existed prior to COVID-19.

Most restaurant owners have already started thinking about their own reopening strategies.

Jonathan Gilman, chef and owner at Brato Brewhouse + Kitchen in Brighton, recognizes that many diners won’t feel comfortable going back to the way things were.

“I think the future for us relies more on a reservation system that we previously had never used, and I think that will help us give assurance to people when they’re coming in,” Gilman said. “It won’t be a guessing game whether they’re going to get a table or whether they’ll be forced to stand next to some people.”

While this cautious approach might cause frustration among those hoping to belly up barside as soon as possible, it also helps to encourage a steady recovery.

“The last thing we’d want to do is reopen and then have to shut down again,” Gilman said.

Takeout and delivery will still be key. If you’ve been ordering takeout and utilizing curbside pickup more than ever before — well, join the club. It’s one way the public has been able to support local restaurants as they bleed revenue during the ban. But when businesses are finally given the green light to open, increased reliance on takeout and delivery will undoubtedly continue.

Kathy Sidell, founder of The Met Restaurant Group, thinks the proliferation of these service models will continue to rise. Met Back Bay and Saltie Girl, her Back Bay restaurants, both offer takeout and delivery, along with pantry items like tinned fish.

“Restaurants are quickly trying to adapt to what the needs are of people at home, and it’s kind of this heat and serve thing, or a DIY, make-your-own pizza or put your own pasta dish together,” she said. “I think that won’t stop. If anything, we’ll have [restaurants] bottling their own sauces and selling whatever it is that they’re known for in a bulk kind of way if possible, a family-style kind of way.”

Gilman agrees that these do-it-yourself takeout concepts have become a new normal for diners.

“I think those things will carry value now that people have been introduced to this format of product, where you can pick up things that [you can] heat and assemble wherever you are,” he said.

He also believes that companies like Uber Eats and DoorDash will retain the influx of people who signed up and used their delivery services during the pandemic. Whether this hurts or helps restaurants is a point of contention. Despite announcing various relief measures during the pandemic — DoorDash reduced commission fees for independent restaurants, and Grubhub suspended commission fees — many delivery apps charge a commission as high as 30 percent. Some restaurateurs are hoping the recent exposure of these numbers will prompt public backlash and reduced fees in the future.

“The fees from the delivery services don’t make delivery viable,” said Jack Bardy, whose restaurants include Beat Brew Hall, Cósmica, and The Beehive, which are currently closed. “Maybe they’ll come down. Maybe there will be some backlash or regulation. The delivery services try to give you their logic as to why it works, but I don’t buy it. You can’t afford to give 20 or 30 percent off the top to a delivery service. There’s no possibility of a profit.”

One remnant of the pandemic that might linger after restaurants reopen is the ability to order beer and wine to go. In early April, Gov. Baker signed a bill that allows restaurants and bars already licensed to sell alcohol to start offering bottles and cans for takeout, as long as they are sold with food. Luz said he expects that legislation to remain intact until at least phase three of the reopening.

“I can pull up to ‘Joe’s Bar’ and get dinner for three and a bottle of wine,” he said. “I don’t have to stop at the liquor store on the way home to get a bottle. Will it continue forever? That’s something that remains to be seen.”

The dining landscape will change. 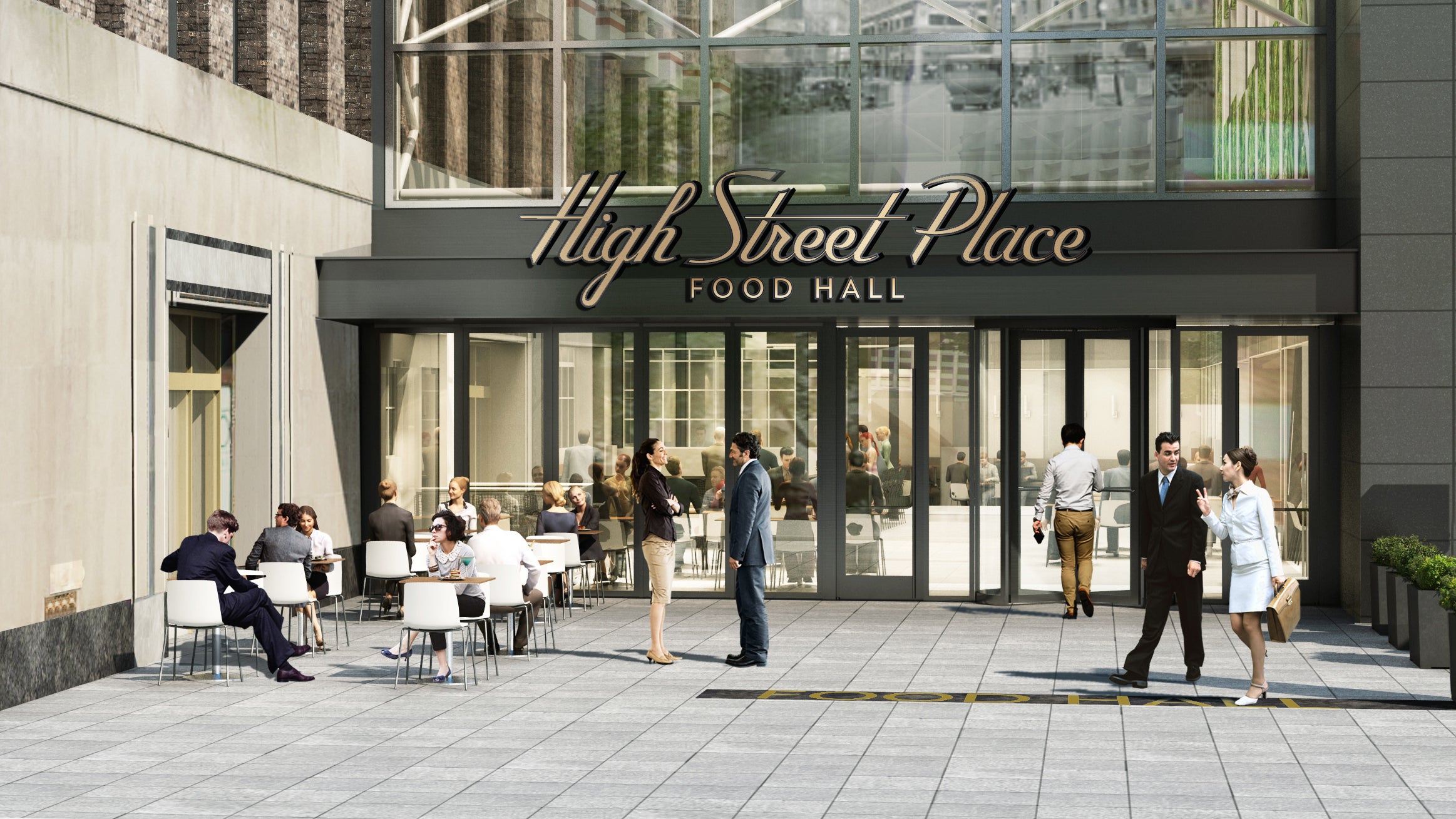 A rendering of High Street Place.

Before all of this began — back when we all thought we’d be wastin’ away in Jimmy Buffett’s Margaritaville this summer — there was growing concern that the city’s restaurant scene was reaching a point of saturation. The coronavirus has almost guaranteed that won’t be the case.

While some reports have put the number of independent restaurants that won’t survive the pandemic as high as 75 percent, Luz said he anticipates a loss of around 25 percent or perhaps higher, noting that certain categories — fast casual, quick service, and chains that were already succeeding with takeout and delivery — are doing OK. But he also noted that full-service restaurants in downtown Boston are underperforming, while businesses in the suburbs are seeing better success.

This was also supposed to be the year when the city’s food hall scene boomed: Both High Street Place and Hub Hall were on track to open this spring, following Time Out Market’s 2019 summer debut. But massive, open-concept spaces packed with people at communal tables now have a more ominous undertone, as do casino restaurants, beer gardens, and sports bars.

“In my opinion, people are going to want to be out just as much as they were before, but maybe in a place that feels smaller instead of bigger,” said Ana Sortun, the chef-owner of Oleana, Sarma, and Sofra. “When you think about experiences, you might want to go out to a place where you can really nestle in with four friends, and it’s not a sports bar where you’re up against somebody who’s sweating. I feel like those small places are going to be jamming, but the big places might not. [Dining] got less and less intimate and more and more food hall-oriented [over the years]. I think it’s going to go back to little and comfortable.”

Minichello said the food hall is looking at every possible scenario before they are allowed to open, including operating as a takeout-only space, taking the temperature of guests before they enter, and creating additional sanitation roles. Hub Hall does not have a revised opening date, he said.

High Street Place did not respond to Boston.com’s request for comment.

Can anything positive come out of this? 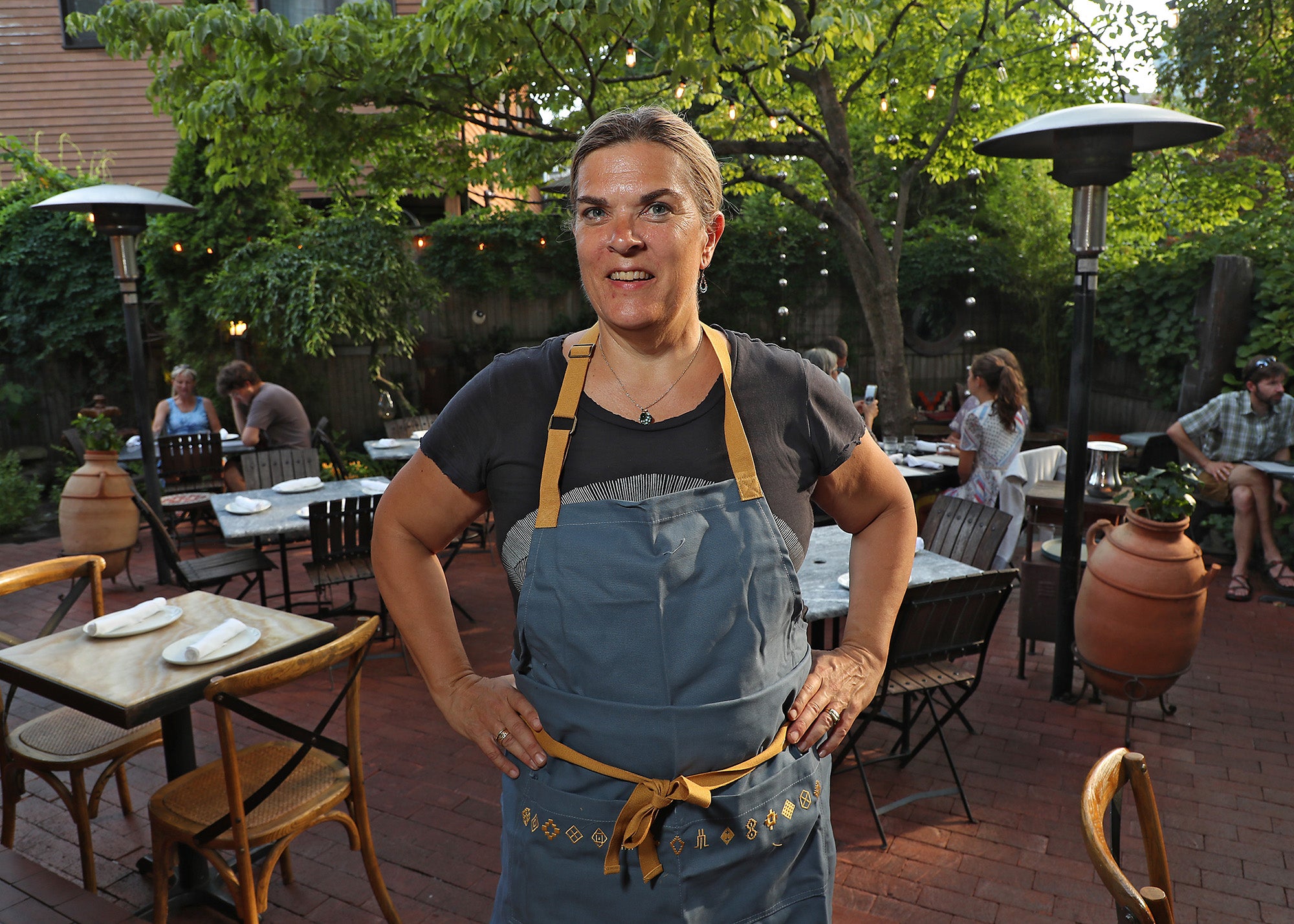 Amidst the financial losses and devastating closures, some chefs and restaurateurs are starting to see a silver lining. When restaurants reopen, it is hard not to imagine a continuing sense of camaraderie that has snowballed throughout the past month. Guests might be more willing to look up from their phones and talk to their neighbors. Innovation, which has become a necessity for restaurants during this time, will continue to thrive.

“I think we’re a resourceful bunch,” said Sidell, who recently launched a crowdsourced cooking show called What’s Cooking With You. “We’re used to dealing with emergencies, oddly enough, so I think people are pretty creative and inventive, and I’ve loved seeing what’s come from this. I think people will find what it is that’s appropriate to their brand and will find another arm to supply some income. That’s the good side of something that’s been pretty horrific.”

The pandemic has served as a steep learning curve for chefs, who have not only had to grapple with new takeout operations, but have also been thrust into a bureaucratic tangle of insurance claims, loan applications, and evolving regulations. And, of course, it has also forced many to reconsider a history of operating on razor-thin margins.

Sortun doesn’t believe everything should change overnight — “there’s a lot of things that really work [in this industry],” she said. But she thinks it’s an opportunity to reexamine how restaurants spend their money.

“There might be some great improvements as far as figuring out how to offer the same benefits to everybody or offering more benefits,” she said. “Or realizing that there should be two months of payroll in the bank going forward instead of redoing the floor or reupholstering banquettes.”

For a chef or restaurateur early in their career, watching the swift collapse of restaurants during the pandemic may cause some deep questioning of their culinary path. It may also filter out those who viewed opening a restaurant a hobby.

“What I think it’ll do is it’ll weed out the people who are like, ‘I’ve been a dentist for 40 years and I’m going to retire and I think it’ll be fun to own a pub,'” Gilman said. “So it probably does a lot of favor to stabilize the industry, where the operations management of these new places are ideally filled with people with industry experience versus people who view it as a pet project.” 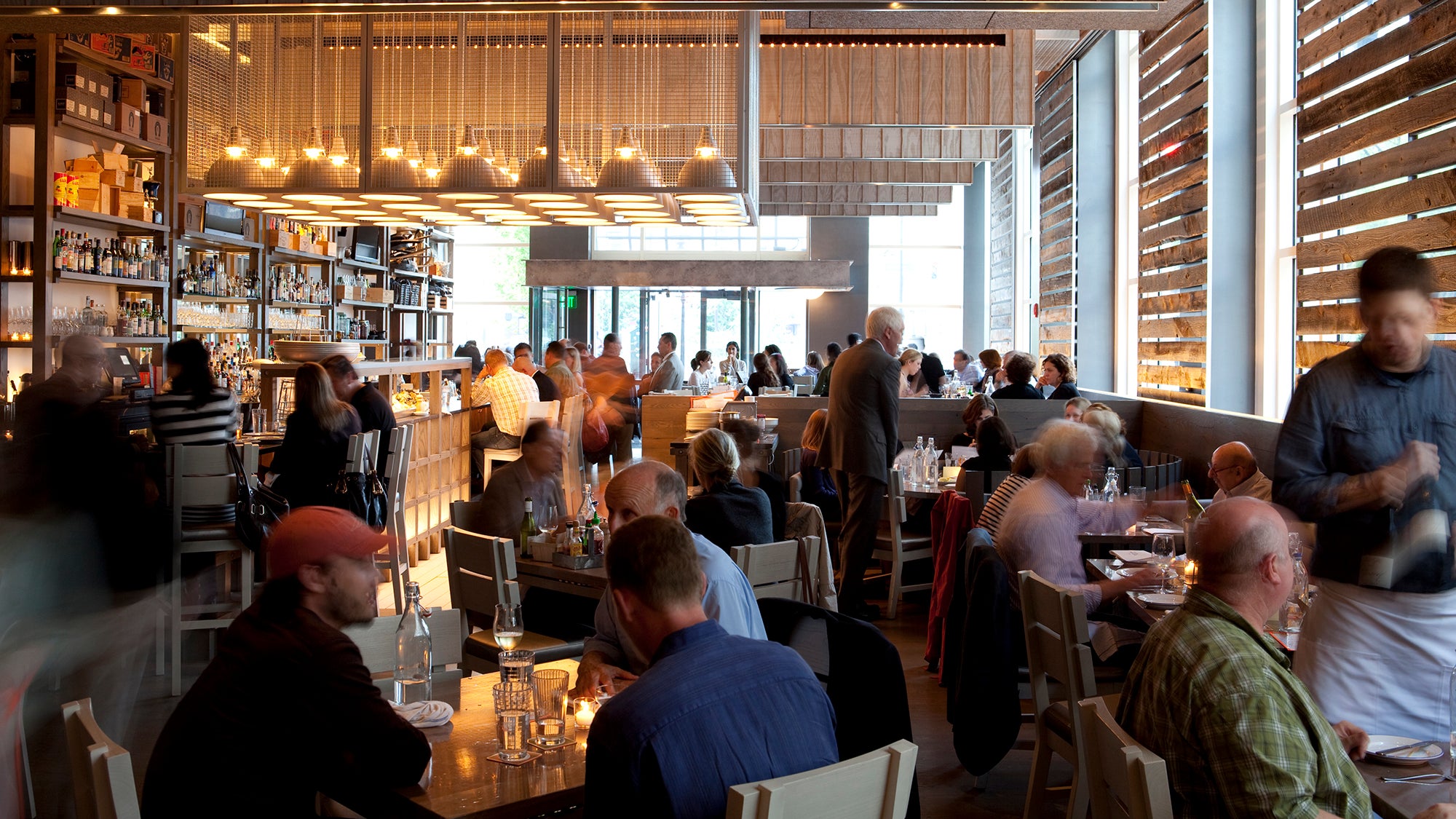