Jared Auerbach first saw the effects of the coronavirus pandemic in early January, when seafood orders from Boston’s Chinatown — and Chinatowns across the country — slowly stopped coming in.

At first, the founder of Red’s Best, a Boston-based seafood distributor, wasn’t too worried.

“The second week of March, we were down about 20 percent,” he said. “Things were starting to get a little weird. We got through the weekend and I lost some sleep over the weekend, but I felt good.”

On March 17, restaurants in Mass. were ordered to shutdown, and Auerbach, who founded Red’s Best in 2008, saw his business fall out from under him as he made the difficult decision to furlough the vast majority of his staff. For someone who spent years intently focused on balancing the supply of the sea with the demand of the public — many of them restaurant chefs — he now wondered: “What’s our contingency plan?”

Across the country, seafood purveyors are all asking the same question. From fish tacos and raw oysters to seared salmon, U.S. consumers spend roughly two thirds of their seafood budget on restaurants or other food businesses; as restaurants closed, the seafood supply chain was drastically altered. The CARES Act recently allocated $300 million to fisheries assistance funding, with roughly $28 million allocated for Massachusetts, but it has yet to be determined what effect that will have on local fisheries and distributors.

Foley Fish is a fourth generation, family-run seafood processor based in New Bedford (another location in Boston is temporarily closed), supplying restaurants and hotels like Celeste, Puritan & Co., Stockyard, and Four Seasons Hotel One Dalton with fresh seafood. After restaurants were ordered to close their dining rooms, co-owner Laura Foley Ramsden said her company lost 85 percent of its business overnight.

“Normally if there’s [an issue] in Boston, the restaurants and resorts are booming in Grand Cayman or Florida or Arizona, but sadly this pandemic crushed everyone,” she said.

Like the restaurants they once sold fish to, seafood distributors are starting to pivot in an effort to keep their business afloat. And the future, many have decided, is frozen.

“There’s a million sustainability reasons why we should have it”

Opened by Sam Wulf in 1926, Wulf’s Fish gained a devoted following through its neighborhood fish market in Brookline before eventually moving to Boston Fish Pier in 2016. It has never sold frozen fish to customers online — until now. On Wulf’s website, customers can purchase scallops, lobster, halibut, Acadian redfish, sole, and rainbow trout, all superfrozen before becoming available for pickup or delivery.

“There’s a million sustainability reasons why we should have it,” said Alisha Lumea, director of marketing and communications at Wulf’s Fish. “There’s a lower carbon footprint. You have less food waste because you don’t have fresh product that’s instantly on a clock and has to be discarded if it doesn’t sell.”

At Red’s Best, Auerbach is so passionate about the future of frozen fish that, at a time when many companies are cutting costs, he said he’s investing in more equipment to help build this new side of his business. The distributor previously sold directly to consumer at the Boston Public Market, but it has recently introduced 10-pound frozen seafood packs, available for shipping, to its online shop.

“We are literally taking this fish off the boat in the afternoon, then it’s hand-filleted, portioned, vac-packed, and super frozen,” he said, describing how his vacuum packing machines can go through six-pack cycles in 30 seconds. “There was definitely a time when consumers would be right to say, ‘I’m not eating that frozen fish.’ But you should come down [to the pier] and see the technology I have at my disposal. The freezing technology is insane.”

And customers are embracing it. While these distributors haven’t seen revenue gains that mimic pre-coronavirus numbers, they have seen enthusiasm and repeat customers, particularly from those who are trying to avoid the grocery store at all costs.

“It has been incredible to me the reception,” said Foley Ramsden, who personally delivers frozen seafood orders to customers in Rhode Island after launching an online shop (Foley’s also ships nationwide). “If you had told me that I would be selling frozen fish in Rhode Island surrounded by water — I mean, I’m shocked. What I don’t know is whether this is just a [COVID-19] situation or whether this is something that will persist.” 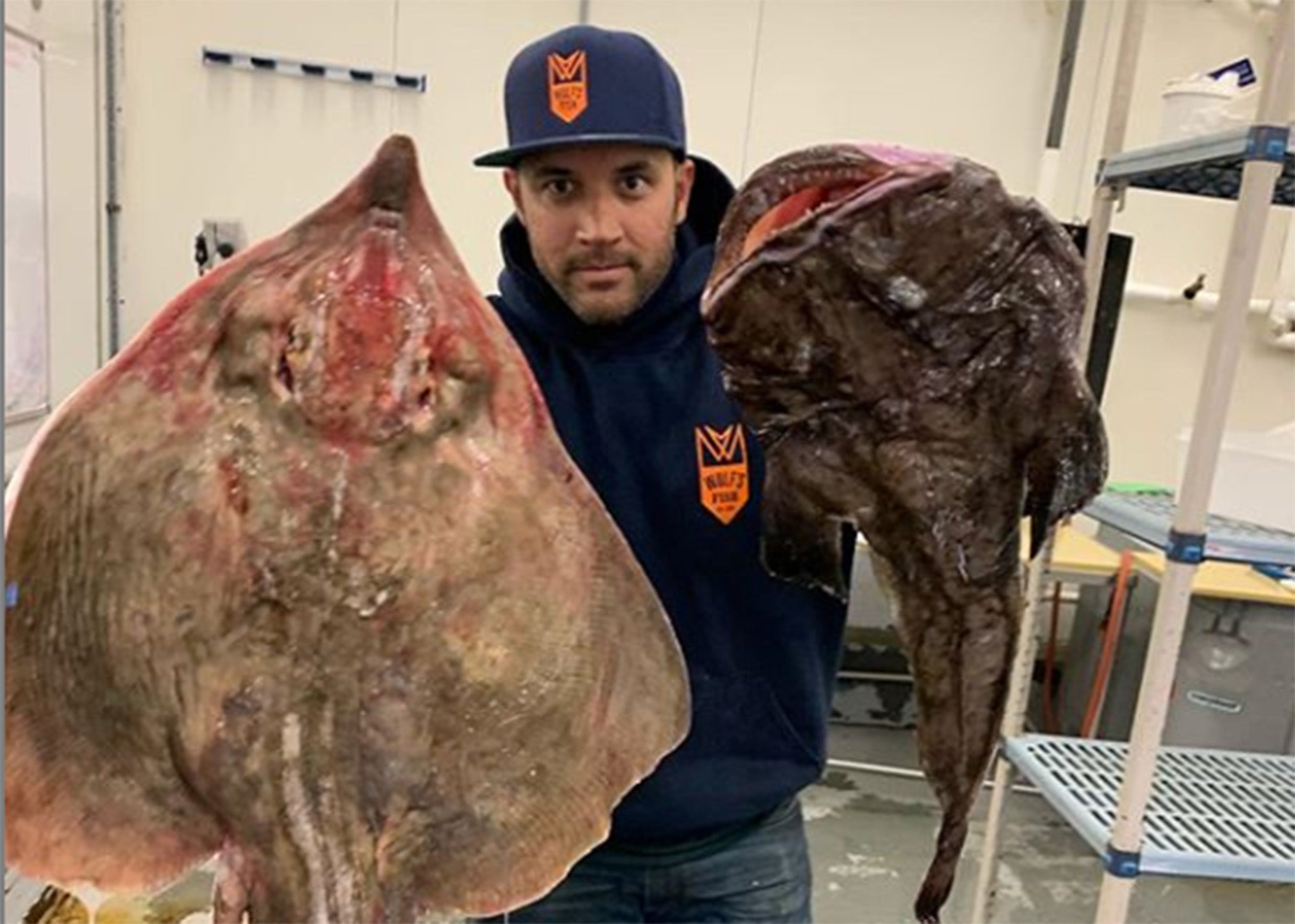 Lumea said she has seen two trends develop in terms of what customers are ordering: a desire for familiar, everyday fish, and a curiosity in out-there species for adventurous home cooks.

“We can’t keep enough haddock on the website, and if you’re from Boston, that’s grandma’s kitchen — that’s comfort food,” she said. “You’re baking haddock and the world is scary. And then we’re selling kampachi collars — things that we put on as a lark. We sold them out, instantly. People were waitlisted for them.”

While selling frozen fish to home cooks is a whole new world for these distributors, they’re trying to make it fun and educational. Wulf’s launched a Chefs at Home series, teaming up with local chefs to provide recipes for customers to follow, and recently partnered with Bent Water Brewing Co. in Lynn to share a curbside pickup service. Red’s Best worked with chef Jeremy Seawell to create a custom marinade sold with salmon.

Customers may be clamoring for all types of seafood, but one category is being left out of the frozen fish experience: shellfish. Many distributors are reducing or completely halting their shellfish purchases, both because they do not freeze well and because the average consumer likely doesn’t know how to shuck their own oysters at home.

“I don’t know how you teach people to shuck their own oysters if you can’t see them in person,” Lumea said. “Some are doing videos; they’re really making a great effort but it’s incredibly difficult. We are not in the habit of buying a bunch of fresh oysters and eating them at home. That’s a huge part of our local food chain that’s just not getting anything right now.”

With reports of widespread meat shortages across the U.S., it begs the question: What about seafood? The answer from many purveyors is a resounding “don’t worry.”

Unlike the meat industry, which is heavily centralized with a small number of processing plants controlled by larger entities like Smithfield Foods and Tyson Foods, the seafood industry is made up of small mom-and-pop fisheries and distributors.

“We’re all processing fish down here on the pier,” Lumea said. “It’s not like there’s only one big FDA-sanctioned plant where things are broken down in a whole area and we’re all in the same building. Everybody is cutting fish.”

The more pressing issue might be how seafood is reintroduced back onto restaurant menus. As restaurants have embraced takeout and delivery, seafood has become a smaller presence on slimmed-down menus.

“With a reduced capacity [at restaurants], I think that it’s going to be super important that you fight for menu-share for seafood,” Foley Ramsden said. “If you only have three items — fried chicken, a burger, you really hope [the third item] is going to be salmon or cod or scallops that the seafood industry can offer.”

That fight may be coming soon. On May 18, Gov. Baker will share which sectors of the economy will reopen as part of the state’s four-phase reopening plan. Whether restaurants are part of that first phase will have a great impact on the local seafood industry’s recovery — and the revitalization of Boston Fish Pier, which Auerbach described in its current state as quiet and slow.

Still, the Red’s Best founder, who has been able to rehire some of his staff, remains hopeful for the seafood industry he fell in love with decades ago.

“As I’m talking to you, I’m standing on a 110-year-old fish pier in the middle of downtown Boston,” said Auerbach. “As someone who grew up here, that’s the coolest thing ever.” 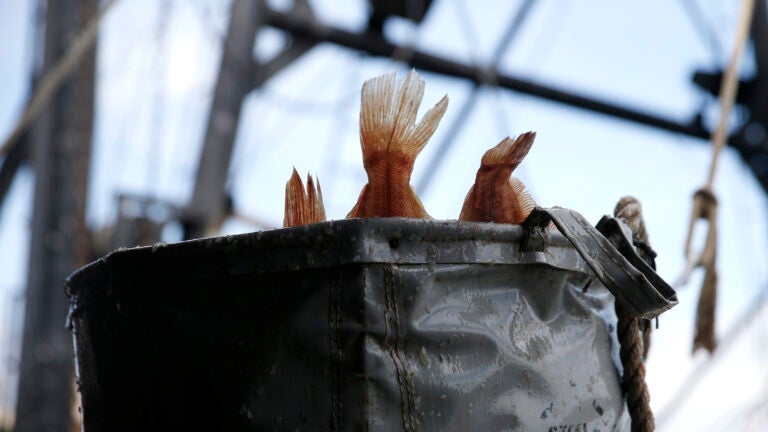