The numbers are staggering.

In a May 21 report, the U.S. hunger relief organization Feeding America projected that one in eight people in Eastern Massachusetts will experience food insecurity in 2020 as a result of the coronavirus pandemic. It’s a 59 percent increase in those who were experiencing food insecurity before COVID-19.

The state has acknowledged this vital need for food assistance: The Massachussets COVID-19 Relief Fund has awarded $6.1 million in grants to address food insecurity, and on May 17, the Baker-Polito administration announced a $56 million COVID-19 Food Security Infrastructure Grant Program, which aims to increase the capacity of food banks and food pantries, help those who use the Supplemental Nutrition Assistance Program (SNAP) and Special Supplemental Nutrition Program for Women, Infants, and Children (WIC) receive benefits more easily, and other services.

That money is crucial. More than three months after the pandemic hit Massachusetts, food banks and pantries have seen a noticeable surge in the demand for food as unemployment continues to rise. In order to meet the exploding demand, these organizations have adapted their business models, conducting door-to-door drop-offs and putting more emphasis on hunger prevention. As the repercussions of the pandemic are set to reverberate in the coming months and years, many industry experts are looking at what the future of food distribution might look like.

In January, Project Bread, which runs a hotline that connects people facing hunger to food resources, received 1,452 calls. In May that number ballooned to 8,000 calls; as of June 12, the organization had fielded over 4,177 calls for the month.

“What we try to do is we talk with them about everybody in the household,” McAleer explained. “They might have a newborn, they might have a first grader, they might have a seventh grader, their parents might live there. And so the reality is that all of those people are eligible for different programs. For the newborn, we might be able to get the family on WIC. School age kids can go to a school meal site; the family could get SNAP; the grandparents could get Meals on Wheels. I think they’re often just calling because they’re wondering where to turn. They know they need food and they’re not really shown what’s available.”

And the need is great. The Greater Boston Food Bank (GBFB) witnessed its two largest distribution months — March and April — in its 40-year history, with 8.1 million pounds of food distributed in March and 9.5 million distributed in April. Prior to the pandemic, the food bank’s highest average monthly distribution was 5.7 million pounds per month in 2019. The YMCA of Greater Boston, which has focused on hunger prevention since closing its branches for wellness and aquatics, has seen an explosion in its numbers as well. James Morton, president and CEO of the YMCA of Greater Boston, shared that in 2019, the organization delivered 837,000 meals to children throughout the year. In the last three months, it delivered more than one million meals to children, families, and seniors in the Boston area.

“It kind of puts things in perspective in terms of the larger number of meals being called upon to provide to the community in light of the emerging need for food,” Morton said. “We don’t think that that need is going to change anytime soon, unless the economy returns to full employment or near full employment as it was prior to COVID-19. We’re going to see more and more families that are food insecure.”

While food providers are starting to settle in to a new normal, many are expecting an upcoming surge — not because of a second pandemic wave, but because the federal government’s extra $600 per week given to those on unemployment is scheduled to run out at the end of July.

“We know there’s a lot of people that unfortunately can’t go back to work for health reasons or economic reasons,” McAleer said. “We’re preparing for another spike come August or September, but also just a very, very long recovery. For people who got [the extra $600], that’s $2400 a month — that’s a lifesaver, to be totally honest, for people out of work.”

David Andre, director of the American Red Cross of Massachusetts Boston Food Pantry, agrees that the decrease in unemployment money will contribute to the number of people picking up food at the Boston Food Pantry.

“It’s really remarkable during the pandemic the number of people that are not the type that have used pantries in the past or are familiar with the system,” Andre said. “We’re seeing a real increase in the amount of people that were working just a few months ago — people that didn’t really know how to pick up food at the pantry, or how things work. That pool is really going to increase when people run out of money.” 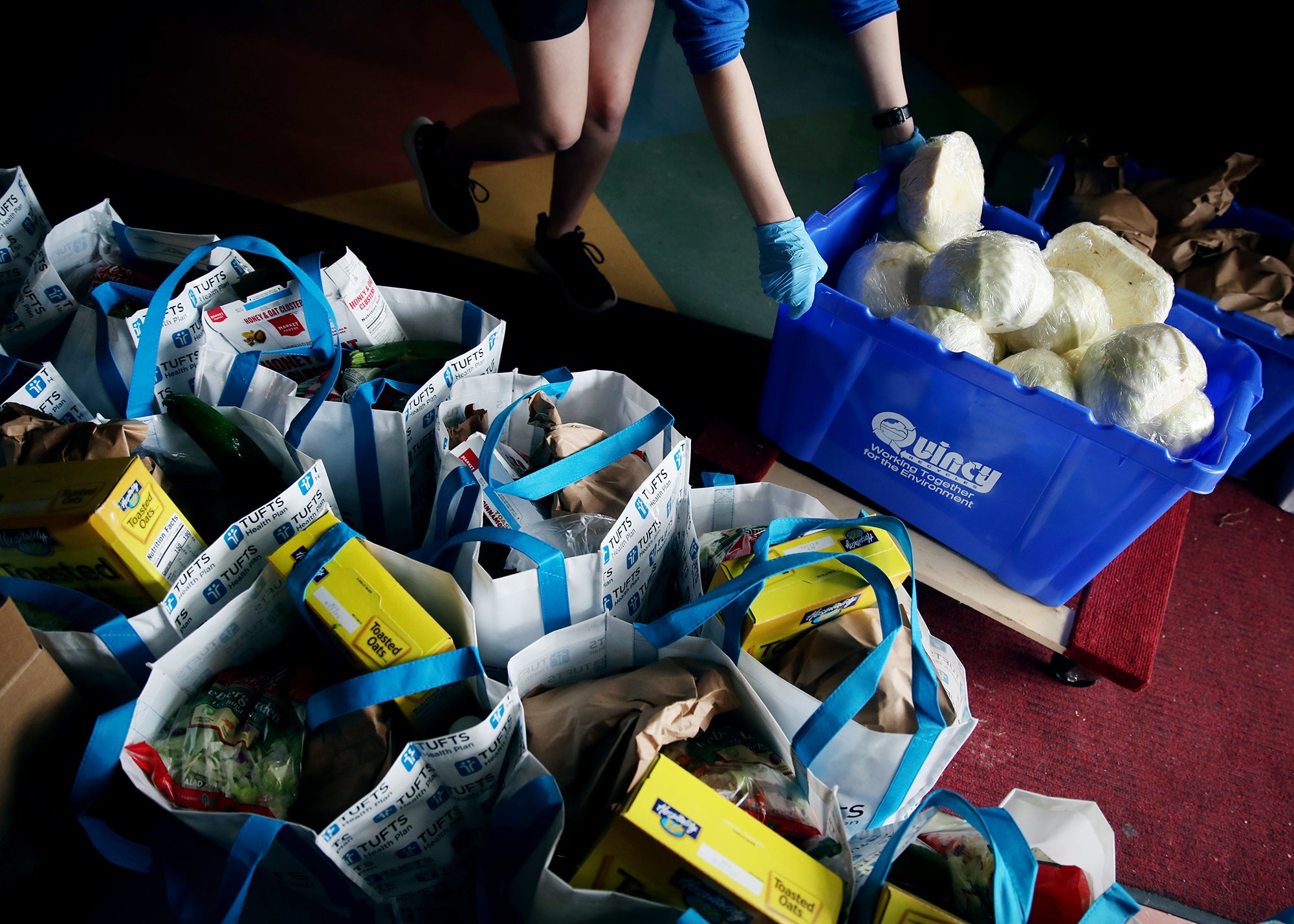 Despite the explosion of demand, food providers have been nimble in adapting their services to fit the state’s growing number of residents facing food insecurity. One prime example of this is the YMCA of Greater Boston.

At the onset of the pandemic, the Y expanded its annual summer hunger prevention program to assist children who were unable to get breakfast and lunch at shuttered schools. They have since partnered with the MBTA, the City of Boston, and the Greater Boston Food Bank to deliver groceries and meals to children, families, and seniors, utilizing services like the MBTA’s RIDE service to conduct home drop-offs.

“It has been a tremendous pleasure and honor to serve the community in the way we’ve been able to,” Morton said. “We wouldn’t have been able to do it without the support of many [partners], and also without a tremendous team of individuals who have not only prepared the bags of groceries but who’ve delivered those bags as well.”

One of those partners is City Fresh Foods. Founded in 1994, the operation got its start delivering culturally diverse meals to homebound seniors. The company, which now resides in a 14,000-square-foot space in Roxbury, expanded to schools and childcare centers with menus that centered around Haitian, Latin, Caribbean, Asian, and other cuisines that reflected the communities it was serving. Pre-pandemic, CEO Sheldon Lloyd said that City Fresh Foods averaged around 12,000 to 14,000 meals per day. Since partnering with the YMCA to deliver meals to those in need, in addition to a handful of their usual clients, they’ve increased production to between 15,000 and 20,000 meals per day.

While managing the demand, City Fresh Foods has made its own adjustments at the facility.

“We had to redesign our [production] line and try to space people out,” Lloyd said. “We had to add a second shift so that we had less people on the floor at the same time. We had to educate and train the staff how to walk, talk, and do their jobs [during a pandemic].”

The Boston Food Pantry has made similar adjustments. The staff was divided into two teams in a way that would best service the pantry if one team had to isolate because of a positive COVID-19 test. It also instituted a drive-through model, where staff load groceries into a visitor’s trunk instead of assisting people inside the pantry. While this method keeps staff and visitors safe, it also cuts down on some of the personal interaction.

“We’ve lost a lot of that socializing,” said Catherine D’Amato, president and CEO of the GBFB. “One where the individual comes in, has a conversation, you get to know them, you can refer them to all kinds of other programs like SNAP and WIC and elder meals, and address some of their food needs a little more specifically. As opposed to: Here’s the universal box [of groceries]. Here’s the same box that has the same 24 items in it and the same 10 items of produce and three items of protein. That’s what we’re all getting used to. So you try to generalize and get everybody as much food now as possible.”

The future of food distribution

Even as the number of COVID-19 cases decreases in Massachusetts, food banks and pantries are expecting food insecurity to remain at elevated levels for the coming months — and possibly years.

“The information is basically saying, due to unemployment, continued business closures, adjustments in our economy, a virus that isn’t going away — we’re not going back,” D’Amato said. “This is it. And so, how do we now adjust to new levels of raising money, new levels of acquisition of food, different kinds of distribution models, different volunteer numbers?”

D’Amato believes that one model that seems to be here to stay is that of home delivery. 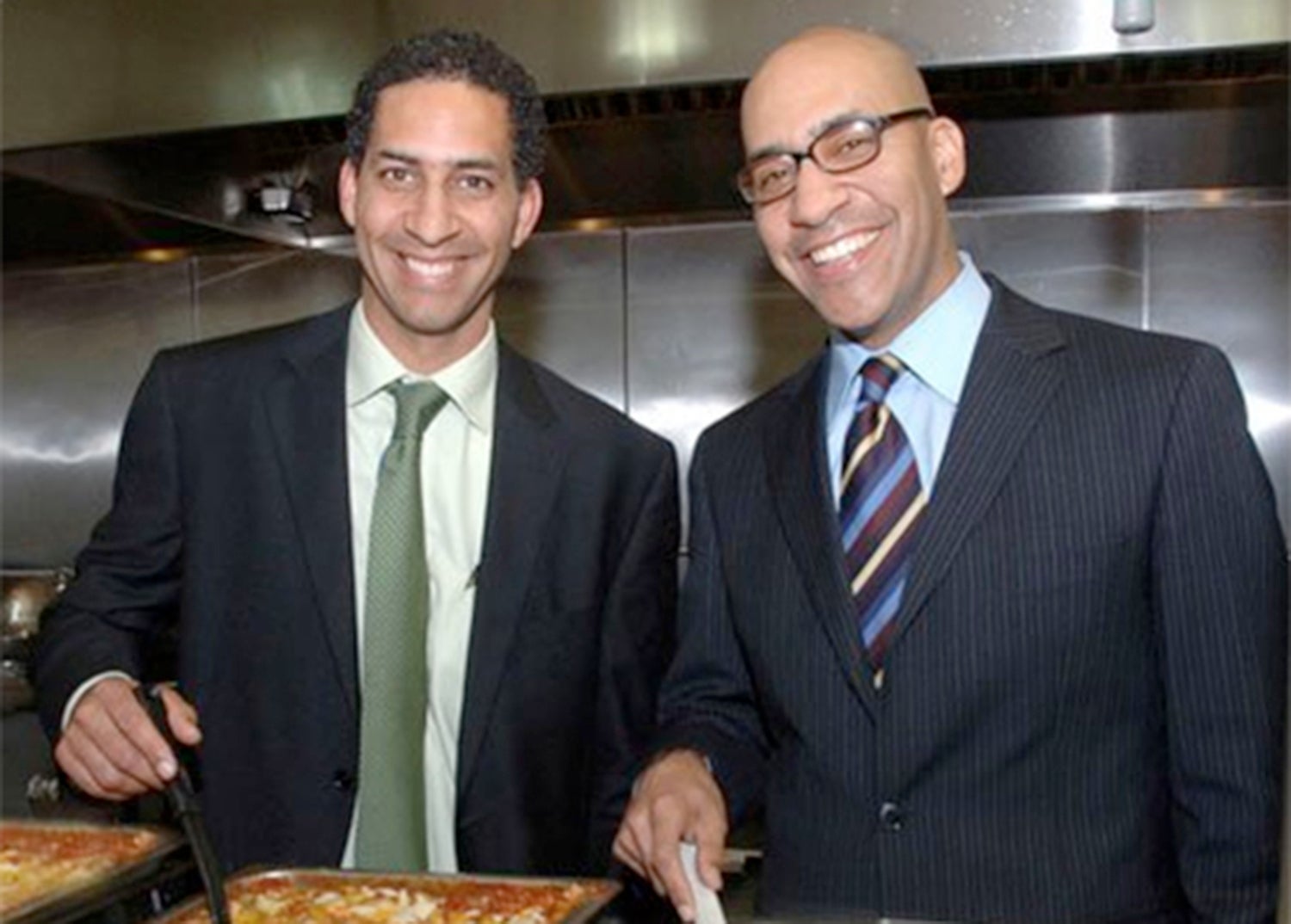 “If I was a visionary, I would say to you that what I would call ‘virtual pantries’ will start to pop up,” she said. “Somebody could order from a pantry, the pantry puts the order on a Grubhub [type of service] and delivers it to your door. There might be more of a call-ahead [system], a box built for you, and you pick it up curbside or put it in the trunk. Those systems already exist; I think the question is: How can we apply it in other ways?”

While the YMCA will continue its grocery and meal deliveries, Morton said it has exciting plans for how those deliveries will be made this summer.

“Every summer, we employ about 700 teenagers,” he said. “For most of those teenagers, it’s their first job. This summer, our goal is to take 300 of those teenagers and have them pack grocery bags and help us deliver those grocery bags and food to families in need. We’re excited to give them a job that has meaning, to give them an opportunity to experience what it feels like to serve the community, and to be part of a network that takes care of essential needs, which is obviously the need for food.”

Beyond summer, Morton said that the Y’s food distribution schedule will be determined largely by Boston’s public school system — whether students will return to classrooms, attend classes online, or a blend of both. He said there are plenty of challenges ahead, but they are “trying our best to sustain the food delivery system that we’ve created.”

City Fresh Foods, which will turn 27 in July, is ready for the long haul. Lloyd said that while the volume of demand has certainly pushed their operations, they are becoming more efficient every day. The company still feeds the communities it started out feeding in 1994, and its history of delivering door to door and succeeding at big bulk drops has proved valuable during this time.

“We’re definitely not relaxing,” Lloyd said. “We’re built to do this.”