Like so many Boston restaurants and bars last year, The Pour House was forced to cease operations just days before St. Patrick’s Day, a holiday that had previously packed the Boylston Street bar. On March 15, 2020, Gov. Charlie Baker limited restaurants to takeout and delivery in response to the coronavirus pandemic.

The Pour House never reopened. On Sept. 2, the bar announced that it was permanently closing after 34 years in business, shutting its doors for good.

And they remained shut — until this past weekend. On Sunday, Matt Champlin proposed to Christine Corning, his girlfriend of three years and a longtime employee of The Pour House, inside the shuttered bar, surrounded by a small group of family and close friends.

The proposal was a coordinated effort between Champlin and C. Talanian Realty, the real estate management company that owns the buildings housing The Pour House and the now-shuttered Lir. After Corning correctly guessed at Champlin’s original plans to propose in Big Sur, Calif., Champlin’s sister suggested a surprise proposal at The Pour House.

It was, after all, where it all began.

In 2018, Champlin, who was working at Berklee College of Music, popped into The Pour House for a drink. Corning was his bartender, and the two quickly hit it off. At the end of the evening, she slid him a piece of paper with her number.

“I said, if you want to get a beer anywhere other than here, I’m down,” she said. “Because I have no shame.”

“I’d never gotten a number from anyone,” he laughed. “Let alone a beautiful girl who was behind the bar. I was shocked.”

He texted her the next day, but Corning was still figuring things out with an ex-boyfriend and wasn’t sure what she wanted. The two started dating other people. A few months later, Champlin left his backpack at The Pour House. When he came back to get it the next day, he asked Corning why she had never responded to his text.

“That was the minute I realized, oh my god, this guy actually cares,” Corning said. “That’s when I realized for good that my ex was my ex for a reason.”

While the two dispute the details of their first hangout, they agree that June 11, 2018, was technically their first date. Corning invited him on a Ja Rule boat cruise, and how could Champlin say no?

Corning, who worked at The Pour House for over nine years until it closed, said the end of her bartending stint there was swift. Now an event coordinator at Whitinsville Golf Club, she said that she never properly said goodbye to the shuttered bar.

“I’ve been telling Matt how I never got my closure,” Corning said. “Half of my regulars were like ‘Bud Light Mike’ and ‘PBR Chris.’ I don’t have their last names. If I knew that that day in March would be my last time I stepped foot in that restaurant, I would have done things differently. I would have gotten names of people and that kind of stuff. I’ve been telling him I have an empty space because I never got my last shift drink. I never got to say goodbye. I wasn’t leaving on my terms.”

That changed on Sunday night.

Champlin and his father had connected with Charles Talanian, owner of C. Talanian Realty, and received the green light to set up the proposal at The Pour House. On August 8, Champlin told Corning to meet him at a parking lot near the bar, under the guise that they would be going to Atlantic Fish Co. for his sister’s surprise birthday party. They passed by The Pour House, where the husband of Kris Mejias, a C. Talanian Realty employee who helped to coordinate the event, was waiting outside, pretending to be working on the property. Champlin mentioned that Corning used to work there and asked if they could go inside to take some pictures.

“I’m hesitating because I don’t know if I want to go in,” Corning recalled. “But I was like, this will be great. In my brain, I’m like, I wonder if my Converse [that I left] are downstairs.”

Once inside, Champlin opened a curtain to the back room, where he and his family had decorated the space with a table covered in a white tablecloth, flowers, and candles, and where his sister had hung a grass wall with a neon sign that read “Will you marry me?” As Corning looked around in shock, Champlin dropped to one knee and popped the question.

“I have really bad ADHD, and it was going wild,” Corning said. “People were popping out. But that was my closure. We met there, we got engaged there. Unfortunately we cannot bring our kids there and get pancakes and hash and eggs in 10 years. But who knows — it might be open.”

A wedding date has not been set; instead, the two are focusing on an upcoming vacation to California and Nevada. Champlin, who currently works as an operations supervisor at Berklee College of Music and recently completed an internship at BNY Mellon for coding, said that he’s looking forward to some time off. He’s also figuring out how he can repay C. Talanian Realty.

“We’re complete strangers,” he said. “They didn’t need to do this at all for me, Christine, my family. I feel like I owe them the world.”

Corning, too, feels incredibly lucky. After the proposal, the newly engaged took photos at the bar, recreating the first time they met. She said that the proposal was “exactly how I wanted it but had no idea that this is what I wanted.”

Corning’s last memory of The Pour House before it closed down was hollowing out pickles to make pickleback shots. It was two days before St. Patrick’s Day.

“Matt came to work, and we sat down in the back and he helped me hollow out pickles that we never even got to use because The Pour House was closed on the 15th,” she said. “But now it’s like, this is my last memory, and it’s perfect.” 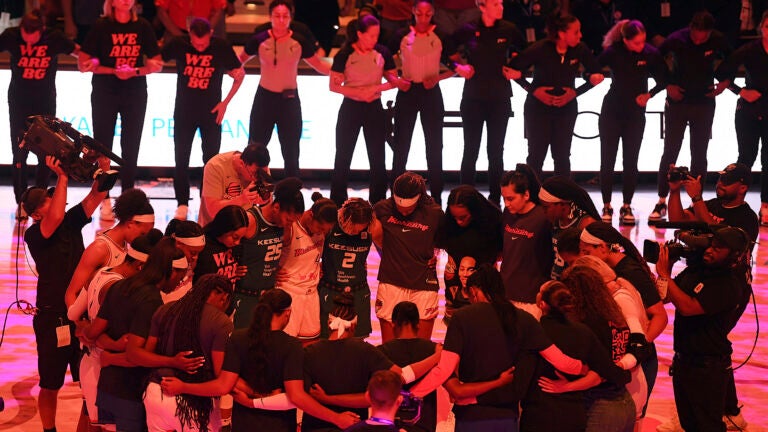