The lively parsley salad tabbouli, a staple all over the Middle East, is an ancient dish (except for the tomatoes), as is hummus, baba ghanouj, meat on a spit, meat on a skewer, flatbread, and salad made with toasted stale bread. The fact that this food has survived for centuries is a testament to the families who have faithfully taught the dishes to each new generation.

The Habrs are an example of this. Elias Habr and his wife, Nada, both born in Beirut, moved from Lebanon to Montreal, where he worked in a Lebanese market, then to Norwood. Every Sunday, the family got together over the traditional foods of their homeland. In Norwood Center, Nada and Elias opened Cedar Markets in 2003. They set up a catering business and a small takeout and discovered customers were willing to wait in line to buy pita roll-ups filled with juicy meats, pickles, and fresh vegetables.

One that few Middle Eastern establishments serve is dandelion greens ($5.99), here a nice balance of sweet and bitter, sauteed and heaped with caramelized onions. Tabbouli ($5.49) is a feast of parsley and tomatoes, usually mixed with a little bulgur, but this one has an infinitesimal amount, garnished with radishes and pink turnip and other pickles. A spectacular baba ghanouj ($3.49 and $5.49) is mixed with mint and tahini; sounds ordinary until you taste the subtle smokiness.

Lemony meat-filled grape leaves ($5.49 and $6.99) are tender little fingers. The traditional meat on a spit is described on the menu as “famous’’ shawarma beef ($4.99). Juicy meat, rolled into pita with plenty of onions, parsley, pickles, and tahini, lives up to its billing.

In almost every dish, the meat is surprisingly moist. To Beirut chicken dinner plate ($7.99) with especially good pasta-studded pilaf (plenty of oil here, thank you), and a mayonnaise-style garlic sauce, offers big nuggets of juicy bird. The falafel plate ($6.49) comes with four giant chick pea and fava bean balls. Aziz Habr tells me later on the phone that the secret to the flavorful, tender falafel is that the spices are cooked and ground with the legumes.

One night, a lamb kebab dinner ($8.49) comes with leg meat that is pink and exceptionally good. Another night, wrapped in a roll-up, the meat is dry and unpalatable. In fact, we wonder if it’s lamb. We take it back and we’re presented a few minutes later with a new version (night and day), with the juicy meat we expected. Habr wants to please his customers. He’s gracious and quick to fix the roll-up, offering the replacement with a plate of tabbouli and his regrets.

The menu isn’t entirely Lebanese. There’s a juicy “deluxe’’ Greek lamb burger ($7.99) topped with spinach. Feta, and the garlic sauce, tzatziki, melt under the patty and make a delicious mess.

I ask Habr why he veered off the food of his family’s homeland. “My wife and I decided we should have a few Greek specialties,’’ he explains. 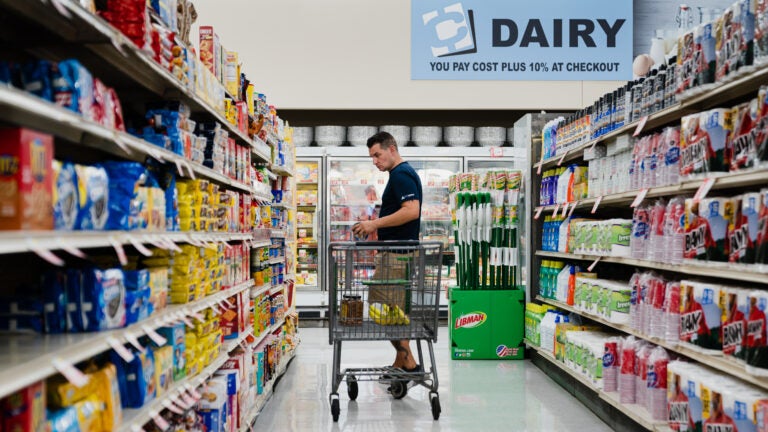