This weekend marks the thirteenth annual Extreme Beer Fest presented by Beer Advocate. Local hopheads will gather during three sessions at the Seaport World Trade Center for endless tastes of some pretty strange suds, poured by more than 70 different breweries.

Unlike other beer festivals where breweries travel from far and wide to deliver their best of any style, EBF lets these breweries experiment and bring some of their most peculiar offerings to the table. For some, this means incorporating anything from grilled corn to Starburst candy into the brewing process. For others, it means leaving out key ingredients all together.

Here are 10 particularly odd beers that you can find at the festival this weekend:

Want to taste the hoppiest beer ever documented? Dogfish Head has you covered. “While the average IPA lands somewhere between 40-60 IBUs (international bittering units), [Hoo Boy] clocks in at 658 IBUs,’’ the brewery said in a release. Hoo Lawd is also brewed with an experimental hop called “Alpha Beast,’’ so you can assume that it’ll be one powerful beer. 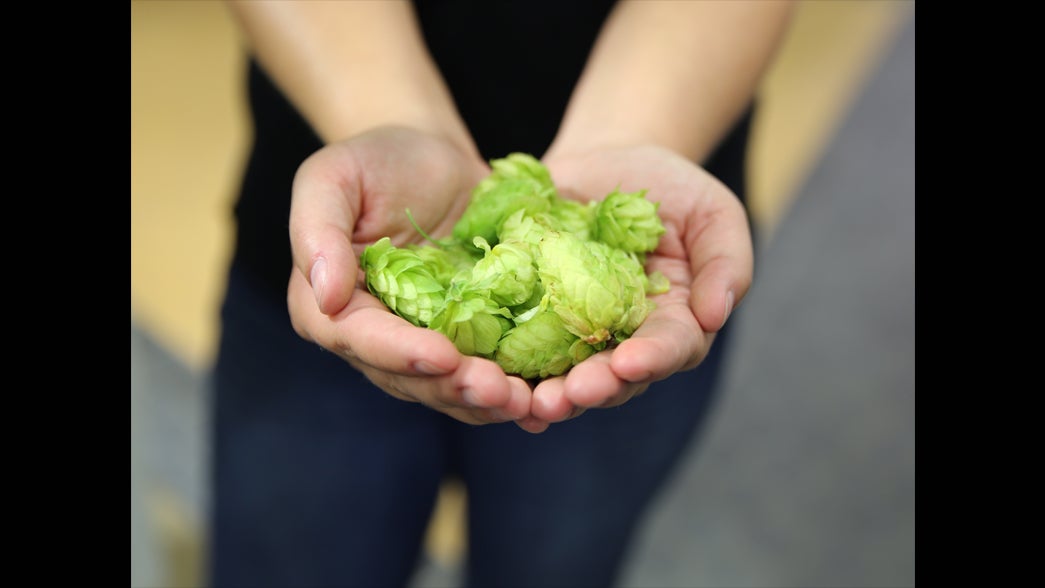 A handful of the Alpha hops used in the Hoo Lawd.

Framingham’s own Jack’s Abby gained a bit of inspiration after working with an Italian crew that helped design its new brewhouse. What resulted, according to Jack’s Abby’s Sarah McGinley, “is a barrel aged [Baltic Porter] with star anise, espresso, and lemon zest– sort of mimicking an espresso shot with sambuca and a lemon peel.’’ The Italiano is one of eight beers that Jack’s Abby will have at EBF. Another one combines orange and peppermint bark flavors. 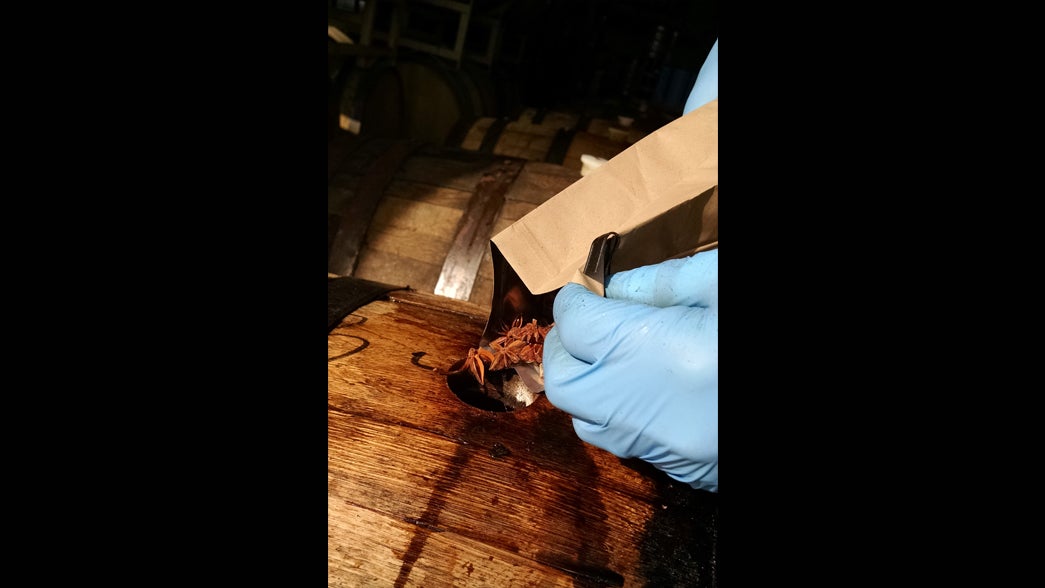 Dosing the barrels with star anise during the brewing process.

Can you imagine a beer without the hops? Cambridge Brewing Company can, and they made it a reality. In place of hops, the brewery uses a melange of herbs that includes sweet gale, ginger, labrador tea, wild licorice root, marshmallow root, coriander, and yarrow. “It comes across the palate with sweet malty and caramel flavors, a bit of yeast-driven fruit and spice, and a pleasant herbal/green tea character with coriander and citrus and ginger notes all complementing one another,’’ brewer Will Meyers said. As an extra fun aside, this beer was served backstage at many Phish shows throughout the ‘90s, which is where is gets its groovy name. 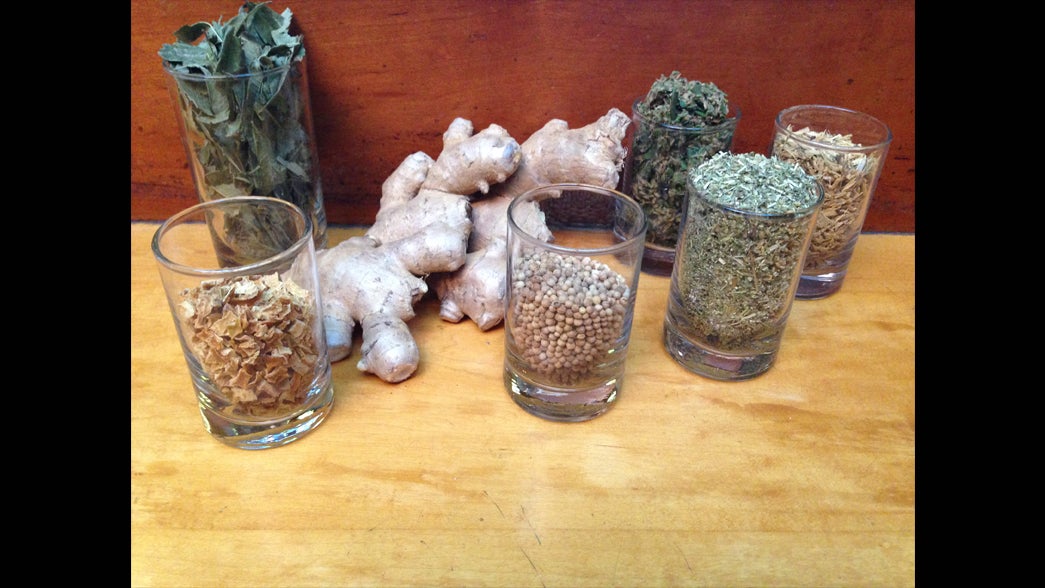 The mix of herbs brewed into Weekapaug Gruit in place of hops.

While EBF will feature more than a few peanut butter-inspired beers, Florida’s Due South Brewing is the only one to mix the smoky nut flavors with the spice of chili peppers in an imperial cream ale.

Pairing the flavor of oysters and chocolate (both aphrodisiacs!) is one bold move by Pawtucket, Rhode Island’s Foolproof Brewing. “Shuckolate Chocolate-Oyster Stout is a local collaboration,’’ Foolproof’s Nick Garrison said. “We partnered with [Charlestown, Rhode Island’s] Walrus & Carpenter Oysters and [Central Falls, Rhode Island’s] Garrison Confections on the chocolate, so this beer is all about the Ocean State.’’ 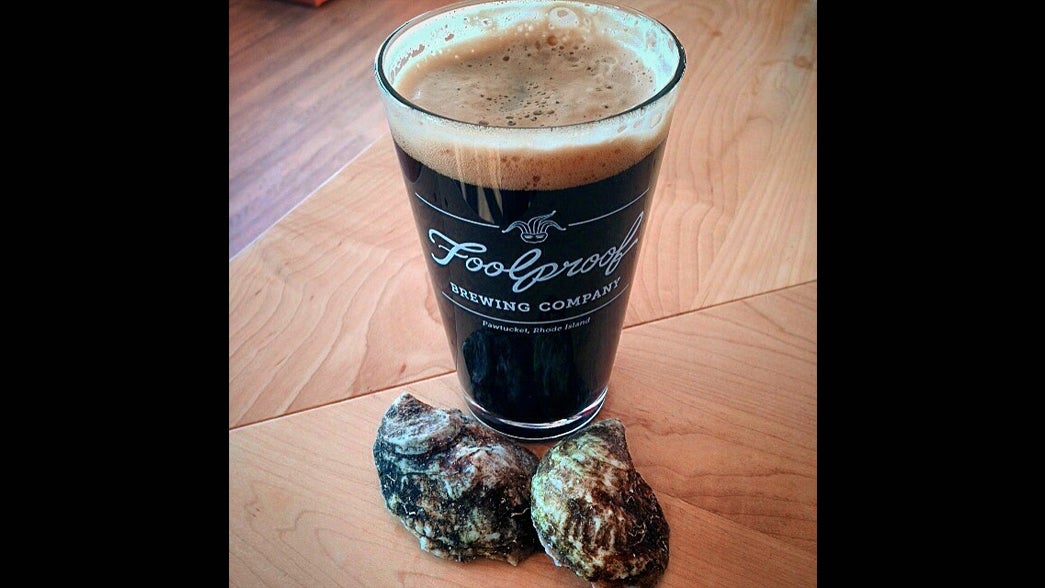 Marz Community Brewing’s What the Pho?

Curious to try a spiced porter that’s inspired by the traditional noodle soup Pho? Chicago’s Marz Brewing has just the concoction. “We use our Bridgeporter base beer and age it on oak and sassafras wood staves and infuse it with Urban Belly soup Pho base,’’ Marz Brewing’s Tom Piekarz said. “The beer is then dry hopped with a spice blend of coriander, cinnamon, star anise, clove, and peppercorn.’’

Sometimes in brewing, one idea can morph into another pretty quickly, which is what happened with this Tomato Gose from an Indiana brewery. “I originally was thinking about making a hot dog beer,’’ brewer Jack Sramek said. “So the tomato comes in because I’m from the Chicagoland area and a proper Chicago-styled dog has tomato on it. The tomato gose itself is a result of multiple tweaks here and there. I ended up styling the beer more towards a Bloody Mary beer.’’ Some of the ingredients in this drink include celery salt, half a cucumber, a whole poblano pepper, and a whole lot of tomato juice.

For a long time, the ghost chili was known as the hottest pepper in the world—400 times hotter than Tabasco sauce by the Guinness Book of World Records’ measurements. Cincinnati’s Rivertown Brewing Company’s Russian Imperial Stout called Death mixes the heat of this legendary pepper with a rich chocolatey malt. According to Rivertown’s website, “This beer celebrates the conundrum of the soul and may be the only time where through Death, life is found.’’

Pad Thai gets even more exciting when it’s in the form of a pint. The brewery that calls Traverse City, Michigan home will pour a spicy brown ale brewed to mimic the popular takeout dish. Originally containing ingredients like lemongrass and cilantro, the brew has been simplified as of late. “It is a custom blend of peanut butter that has toasted coconut and Thai chili peppers,’’ owner Russell Springsteen said. “You get peanuts on the nose and palate and a slow burn down your throat. Yes, it’s hot!’’

Hellzapoppin is one of four beers that this Chicago-based brewery will pour at EBF. A German-style Helles lager with a funky name, the Hellzapoppin is brewed with a homemade clementine, meyer lemon, and key lime soda. While it creates a refreshing, citrus-y flavor, it likely won’t knock you on your tush, as it contains only 2.5 percent alcohol by volume.