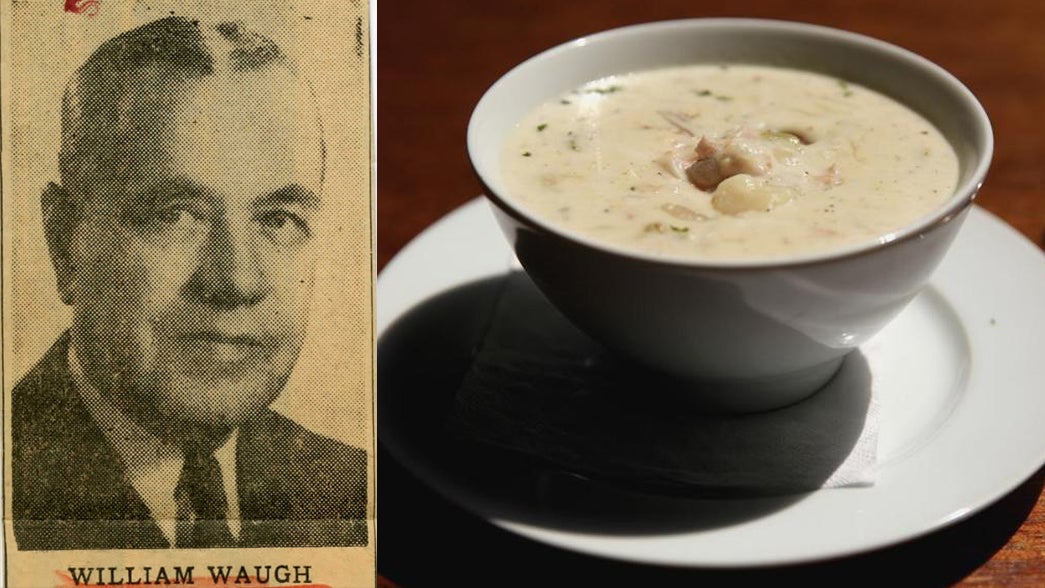 There is perhaps no dish more symbolic of Boston (yes, that includes baked beans) than clam chowder. The soup has gone from shipyard fare to a popular appetizer in just about every New England comfort food restaurant. The northeast’s pride in and passion for chowder is reason enough to go back in the archives and try to make some sense of an odd Boston tale regarding the region’s favorite cream-based dish.

The story starts with William Waugh, who, according to his 1969 Boston Globe obituary, was for many years a Newton Centre resident and vice president of sales at the Sea Frost Fish Co., a now-closed seafood distribution company in Boston. Waugh was active with the Massachusetts Restaurant Association and the Boston Rotary Club.

He was also the owner of a top-secret clam chowder recipe, James S. Doyle wrote in a November 17, 1962 Globe article.

No sources indicate how Waugh came to own this recipe—if he developed it himself, or if it was inherited. But according to Doyle’s Globe article, on August 26, 1937, after negotiations fell through to sell it exclusively to an unnamed local soup company for $50,000 (more than $822,000 in today’s dollars), the recipe was sealed in an envelope and sent to an unspecified bank, “to be deposited in escrow.’’

The bank is where it remained until 1962, when Doyle wrote his article about Waugh’s mysterious, valuable recipe. In his piece, Doyle reported that Waugh had passed away, and when the bank’s legal commitment ended earlier that month, the envelope was turned over to Massachusetts Department of Corporations and Taxation Commissioner Guy Rizzotto. 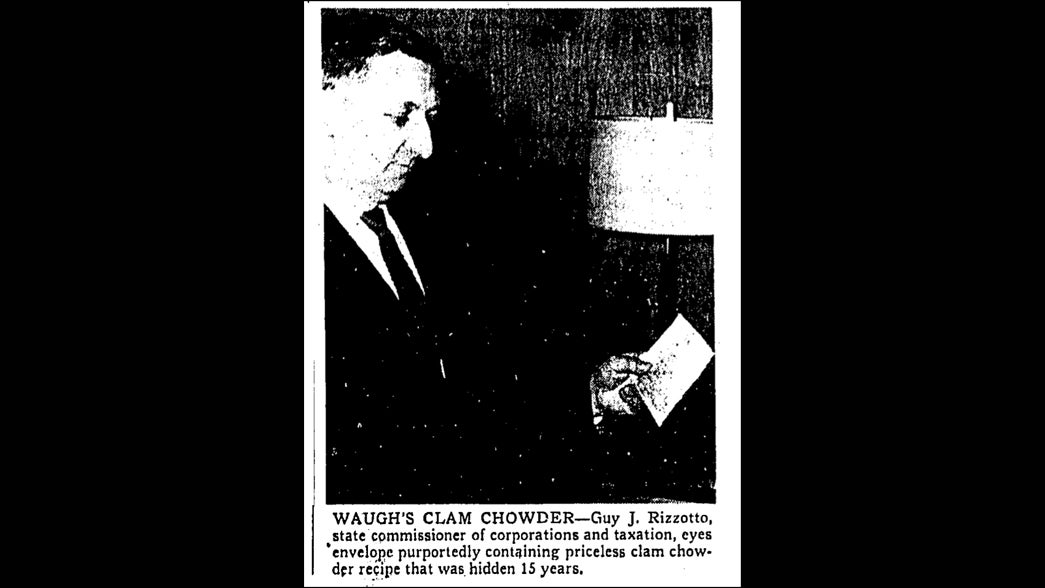 “I’m sorry, gentlemen,’’ Rizzotto said, via the Globe. “The envelope will be opened in due time, but not for at least six months.’’

Per the Globe, “state law’’ prohibited the state from opening the envelope until at least six months after it had been turned over. Instead, the Globe reported, the recipe remained sealed in a desk drawer on the fifth floor of the Mason Street offices of the Corporations and Taxation Department, dated August 26, 1937, with the following message: 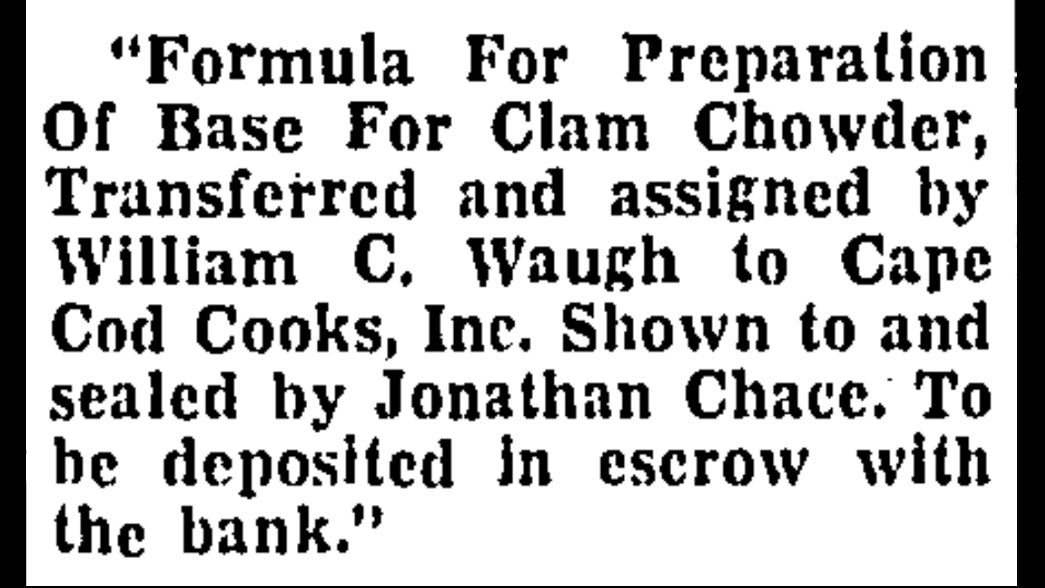 “Formula For Preparation Of Base For Clam Chowder, Transferred and assigned by William C. Waugh to Cape Cod Cooks, Inc. Shown to and Sealed by Jonathan Chace. To be deposited in escrow with the bank.’’

What was in that envelope that made Waugh’s chowder so scrumptious?

“Deep in the minds of all who gaze on this envelope is a disturbing thought,’’ Doyle concluded in his article at the time. “What do we do if it calls for tomatoes?’’

Tomatoes in clam chowder is more of a New York thing, as the Manhattan version of the dish calls for a tomato base, unlike the cream base of New England-style chowder. Perhaps that’s where New England’s aversion to the ingredient stems from. Rodney Murillo, culinary director of Davio’s Northern Italian Steakhouse in Boston, explained the difference.

“For the Manhattan clam chowder, the acidity of the tomatoes doesn’t do any favors to the clams or to any seafood for the most part—it kind of overpowers it,’’ Murillo said. “Traditionally, all chowders are cream-based. The only soup that I know that calls itself a chowder that’s not is the Manhattan clam chowder. To me, the tomato base makes it more of a bouillabaisse.’’

By raising the tomato question in 1962, Doyle got the attention of many, but it was the response of one particular reader that makes this story even stranger. In a follow-up article the next day, the Globe cited an authority who had information on the chowder recipe.

“The authority is William Waugh himself,’’ the Globe reported. “Big as life. In fact, alive and kicking.’’ 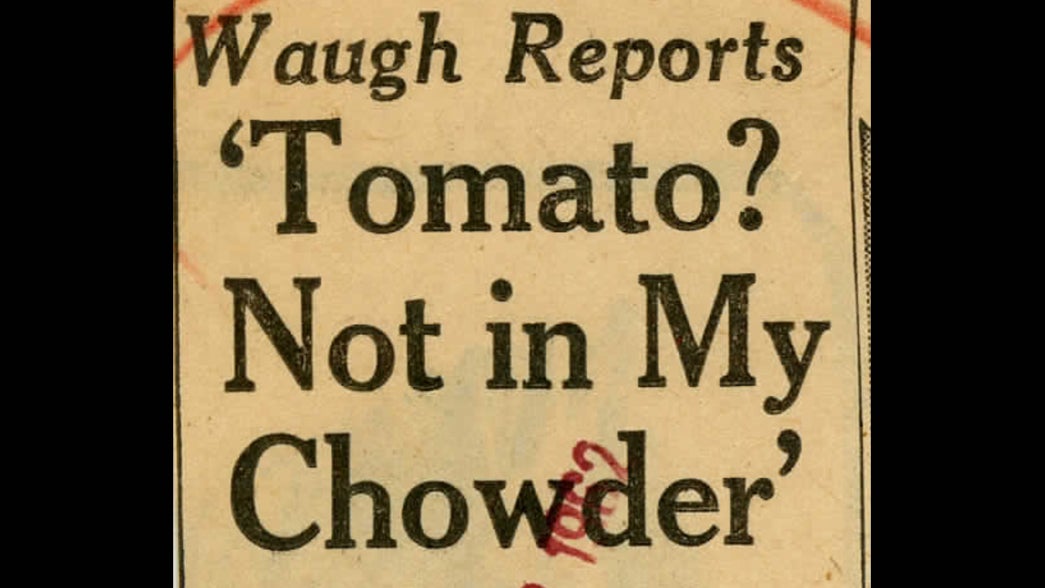 Apparently, Doyle had erroneously reported Waugh’s death the day before. But Waugh seemed less concerned with the false report of his own passing than people thinking he would consider putting tomatoes in his chowder recipe.

“That,’’ he told the Globe, “is not only a dastardly innuendo; it is pure heresy. I demand a correction forthwith.’’

Still, Waugh did not reveal the specifics of his recipe to the Globe.

The author of the original clam chowder story, James S. Doyle, had been hired at The Boston Globe a year before that article was published. After these pieces ran, Doyle spent 10 years at the Globe, completed a Nieman Fellowship in 1965, and served as a special assistant to Watergate prosecutors Archibald Cox, Leon Jaworski, and Henry Ruth. Now 80, he currently resides in Maryland and does not recall Waugh’s famous clam chowder recipe.

“What a great story!’’ Doyle said. “I’m sorry to tell you that nothing comes to mind. I was probably still on General Assignment at that point. That’s the kind of story—I just loved doing stuff like that, but I unfortunately don’t remember this clam chowder one at all. That was smart of me to end it with that line about the tomatoes, though.’’

The evening edition of the March 28, 1963 Globe includes it in full, in an article describing the New England feast that took place at the Ad Club in Boston for Clam Chowder Day. Waugh’s chowder was one of many dishes served, and was received well, with the author writing, “there was a general call for seconds.’’

Along with the review, the paper printed the recipe, which had been secret for 36 years—and no, as Waugh previously confirmed, it does not call for tomatoes. 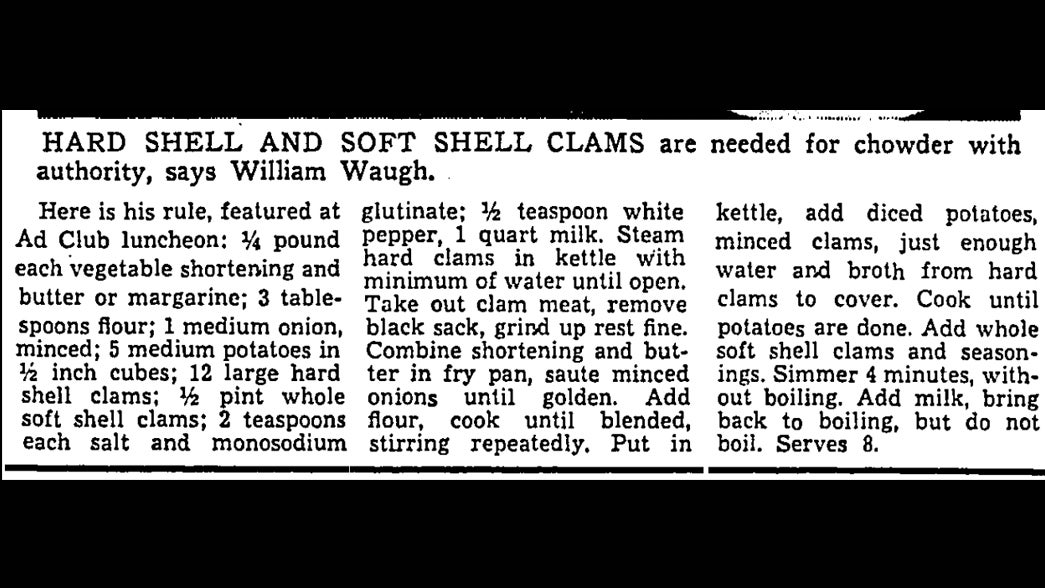 No documents point to to any sort of fanfare around the recipe’s publication. Could there still be a sealed envelope with Waugh’s recipe listed inside? Why did Waugh decide to turn it over to the Globe then? Is there a popular local seafood chain serving his recipe today? Those questions, like many of the details surrounding Waugh’s story, remain a mystery. 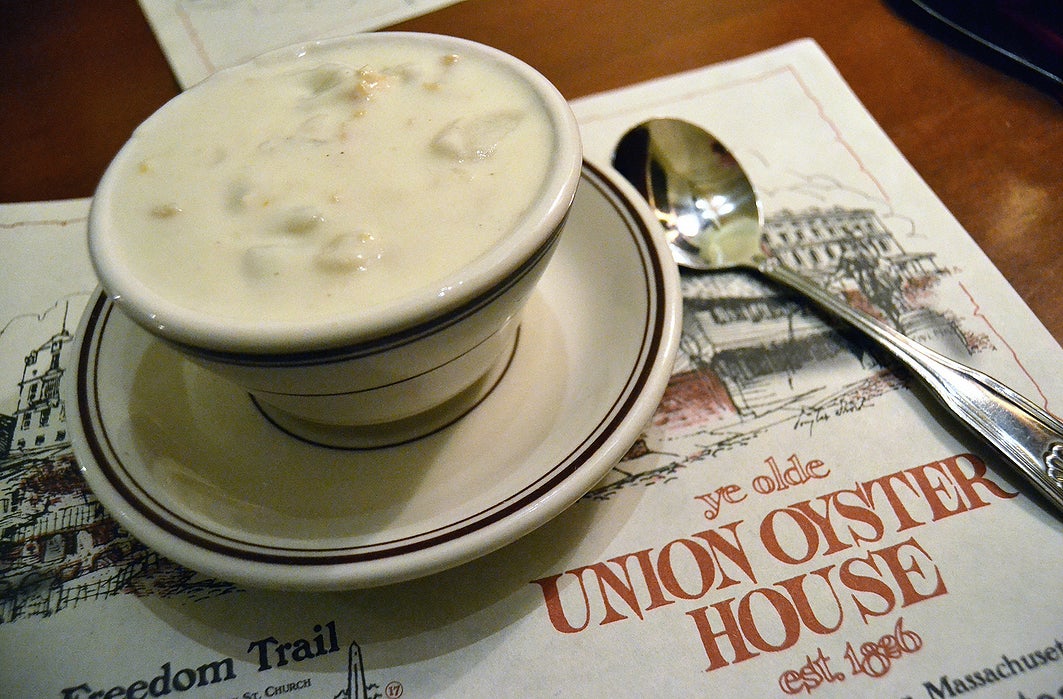 Boston.com readers share their favorite places to enjoy a bowl of clam chowder