The last time the New England Patriots faced the Philadelphia Eagles in a Super Bowl, former Massachusetts Gov. Mitt Romney turned down a friendly food wager from Pennsylvania’s then-Gov. Ed Rendell. The reason? According to Rendell, Romney thought the cheesesteak was too high in fat. Instead, the two governors agreed to a deal in which the official from the losing region would sing the national anthem during a game between the Boston Celtics and Philadelphia 76ers. After the Eagles succumbed 24-21 on Feb. 6, 2005, Rendell dutifully performed the anthem in Boston, though he fudged the bet a bit by bringing his wife, a trained singer, on the court with him to help out.

With the New England Patriots and the Philadelphia Eagles set to face off in Super Bowl LII on Feb. 4, businesses and politicians in Boston and Philadelphia have set up a number of friendly wagers. While there’s none yet to report from Massachusetts Gov. Charlie Baker and Pennsylvania Gov. Tom Wolf, if Baker and Wolf ignore Romney’s precedent and agree to a culinary bet, there’s a decent chance that the Philadelphia side will involve cheesesteaks and the Boston side will include something seafood-based — perhaps New England’s own iconic sandwich, the lobster roll.

“One Wiz Wit,” which is a cheesesteak with Cheez Whiz and onions, at Pat’s King of Steaks.

Most sources — from the official Philadelphia tourism website to the Oxford Encyclopedia of Food and Drink in America — agree that the original form of the sandwich was invented in 1930 by a hot dog vendor named Pat Olivieri, who ran a cart with his brother, Harry. As the legend goes, things changed for the brothers when Pat Olivieri decided to put some beef from a local butcher on the grill and craft himself a beef sandwich.

“One day they were making the steak on the grill and put it on a hot dog roll,” said Carlos Astacio, the manager of Pat’s King of Steaks, the restaurant that the Olivieri brothers eventually built in 1940. “And a cab driver came up as Pat was making his lunch, and the cab driver said, ‘Give me one of those!’ They made it for him, and it took off. It became a neighborhood thing, then a city thing, and then it just exploded from there.”

Fast-forward 80-plus years, and Pat’s King of Steaks is still selling the sandwiches at the corner of South 9th Street, Wharton Street, and East Passyunk Avenue in South Philadelphia. Down the street from Pat’s is Geno’s Steaks, Pat’s rival restaurant since it opened in 1966.

Pat’s King of Steaks and Geno’s Steaks, which are both known for their Philadelphia cheesesteaks, in 2000.

It’s with the introduction of Geno’s that the cheesesteak origin story gets a little messy. According to a First We Feast interview with Philadelphia food historian Carolyn Wyman, author of “The Great Philly Cheesesteak Book,” the oldest of the cheesesteak restaurants in Philadelphia don’t have “cheesesteak” in their names because the sandwich existed for decades before adding cheese was the norm. Both Pat’s and Geno’s claim they were the first to dabble in cheese, according to Wyman. She said Pat’s dates the invention back to the 1940s, when Pat’s employee “Cocky” Joe Lorenzo added provolone to his own sandwich, while Geno’s founder Joey Vento claimed he was the one who spun the cheesy sandwich up in the 1960s.

For the record, Wyman sides with Pat’s in the debate. However, food historian Sandra Oliver said that, based on her decades of research into culinary origins, she’s dubious about any claims that a single individual “invented” a food.

“No matter how you look at any of these things, my experience with food history is that nothing is ever really ‘invented,’” Oliver said. “Recipes, like people, are descended from something or someone.”

Regardless of who was first or who invented what, both Pat’s and Geno’s are winners. Much like the Mike’s Pastry–Modern Pastry cannoli debate in the North End, for which tourists flock to the Italian neighborhood, the rivalry benefits both restaurants.

“On the weekends, sometimes we get a line around the building,” Astacio said. “When tourists come, you want to see the museums, see the Liberty Bell, and grab a cheesesteak. It’s great.”

If the history of the cheesesteak sounds complex, it doesn’t hold a claw to that of the lobster roll. One theory is that the lobster roll was first sold as a hot sandwich (similar to the modern “Connecticut-style” lobster roll) at Perry’s, a now-closed restaurant in Milford, Connecticut, in the 1920s. But Oliver considers the sandwich’s origins more closely tied to the Maine lobstermen of the 1890s and 1900s. Oliver, the author of the award-winning book “Saltwater Foodways: New Englanders and Their Foods at Sea and Ashore in the 19th Century,” researched the topic by scouring old magazines from the late 19th and early 20th centuries and listening to personal reminisces from people whose ancestors grew up in Maine during that time.

According to Oliver, lobster fishermen at the time kept their catch in “lobster pounds,” natural coves that penned the lobsters in the same way a farmer might fence in cattle. The lobsters didn’t always thrive in the closed quarters.

“If it looked like things were heading south [in the pound], they could yank the lobsters out and cook ’em up,” Oliver said. “A boiled lobster lasts longer than a live one. So what do you do with a cooked lobster? One possibility is you can sell it to tourists.”

According to Oliver, there is evidence that in the 1890s and early 1900s, tourists coming up to Maine for the summer (known as “rusticators” in Maine vernacular) would visit pounds and either buy a whole lobster and it on sight or buy lobster rolls from the fishermen. These rolls differed very little from the lobster rolls of today.

“These days most pounds have tanks rather than coves, but tourists still do the same thing,” Oliver said. “Lobster is a pain because it comes apart in little pieces. It’s not like a pork chop or a chicken. There’s little bits and pieces. What are you going to do with that? You put it in a roll!”

Perhaps surprisingly, given the lobster roll’s status as a cheaper way of eating lobster, Oliver said that at one point it was considered a “polite” method for dining on the shellfish.

“It was a very polite way for Edwardians and Victorians to eat lobster, as well as early 20th-century tourists,” Oliver said. “You don’t have to stick your little tools in to crack open the shell, or smash open claws, with lobster juice running down your arms. It’s neater, tidier.” 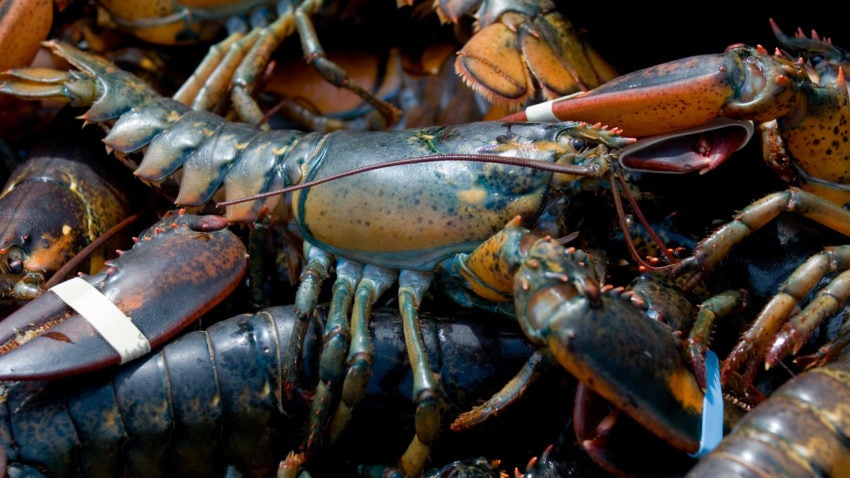 Though the lobster roll remain an iconic New England dish, the sandwich has spread across the nation, like its cheesesteak brethren. Chef Jasper White, an icon in the Boston seafood world, said he helped promote the rise of the lobster roll by adding it to the menu at his now-closed North End seafood restaurant, Jasper’s, and with his cookbook, “Lobster at Home.”

“In the ’80s, I was at the forefront of the ‘New American’ cuisine, and I was taking New England dishes and updating them,” said White, who is also behind Summer Shack. “When it came to the lobster roll, they were so perfect, so I didn’t really feel the need to update them. I served them in a fine dining setting at Jasper’s, so I did a saffron bun as a kind of affectation, a way to get big money for a lobster roll. But really, the lobster roll is just perfect the way it is.”

While it may be upsetting for New Englanders to hear, White gives New Yorkers credit for helping the lobster roll reach national prominence.

“The food media for so many years was based in New York, especially before the internet,” White said. “So whatever happened in New York, a year later would be happening around the country. They picked up on the lobster roll because it’s excellent, but also because a lot of New Yorkers have summer homes in Cape Cod and Martha’s Vineyard.”

The cheesesteak has similarly thrived and endured, which might also be due to the way it’s been marketed. In her First We Feast interview, Wyman acknowledged the hustle of Pat Olivieri.

“The reason the cheesesteak really blossomed was because of Pat himself,” Wyman said. “He was a larger-than-life figure who visited local theaters and concert halls, bringing steak sandwiches to the stars, then luring them back to his shop and taking pictures of them eating. He spread the word about his sandwich all over the world via these celebrities, and made into a star.”

Additionally for the lobster roll, Oliver said that market forces have helped drive its continued standing.

“There’s been phenomenal lobster harvests for the last few years, so they need to find ways to sell it,” Oliver said. “There can’t necessarily be lobster in every restaurant in the nation, but they have to find ways to sell lobsters for $25. Now along with lobster rolls, we see stuff like lobster mac ‘n cheese and lobster salad everywhere.”

“On the one hand, when you taste it, the warm, buttery roll and the cool lobster salad, it’s exquisite,” White said. “On the other hand, when you see the way it’s served, in a little paper cup with a bag of potato chips, it’s humble. To me, that’s New England.” 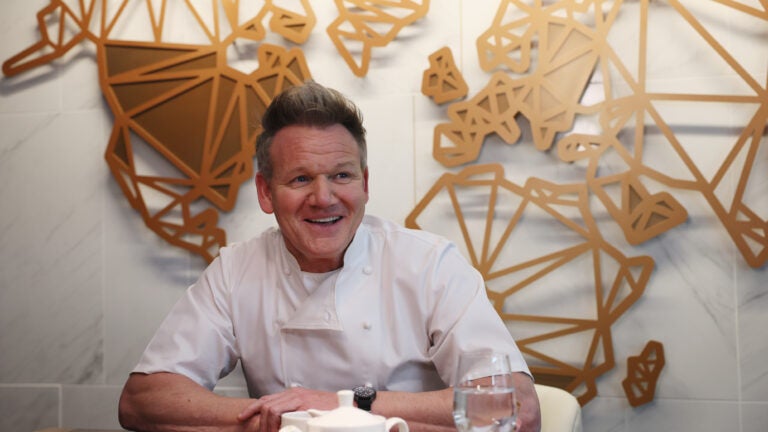 Gordon Ramsay: '... the politics over a freaking lobster roll, for God’s sake, what the hell?'