The North End is perhaps Boston’s most iconic dining district, and for good reason. Its character and old-world charm is not only well-preserved, but also lovingly tended to, creating a neighborhood where throwback red sauce joints mingle with modern takes on Italian cooking (and even a few stellar non-Italian eateries).

1. Al Dente
Al Dente is classic Italian-American dining stripped down to the bare essentials. In terms of atmosphere, it’s about one notch above a takeout pizzeria. But what Al Dente lacks in decor, it makes up for in heaping plates of underpriced, satisfying pasta classics (carbonara, bolognese, etc.) that can be washed down with gently priced wines. (109 Salem St. #1, Boston)

2. Antico Forno
As the name implies (antico forno is Italian for “ancient oven”), most everything on the menu at this Salem Street classic gets baked in some way. It’s best known for its chewy wood-fired pizza that can be topped with housemade sausage, but Antico Forno also has entrées — like a house-special gnocchi — in terra-cotta pots that get “finished” in the oven before arriving at your table. (93 Salem St., Boston)

3. Artu
Since 1992, Artu has been pleasing local carnivores with a menu that’s heavy on roasted meats. Lamb and rotisserie pork panini are served during lunch, and evening hours feature roasted chicken and steak. It also has something quite rare in the neighborhood: a full liquor license that goes until 2 a.m. (6 Prince St., Boston)

4. Bricco
Bricco is the mainstay property of neighborhood restaurateur Frank DePasquale and has a wide-ranging menu of pastas and classic Italian entrées alongside an indulgent menu of steaks and a surf-and-turf special. It also boasts one of the few late-night menus in the area, offering a truncated selection of antipasti and pizza from 11:30 p.m. to 2 a.m. Fridays and Saturdays. Should you feel particularly smitten by its bread basket, you can pick up some loaves to go at the adjacent Bricco Panetteria. (241 Hanover St., Boston) 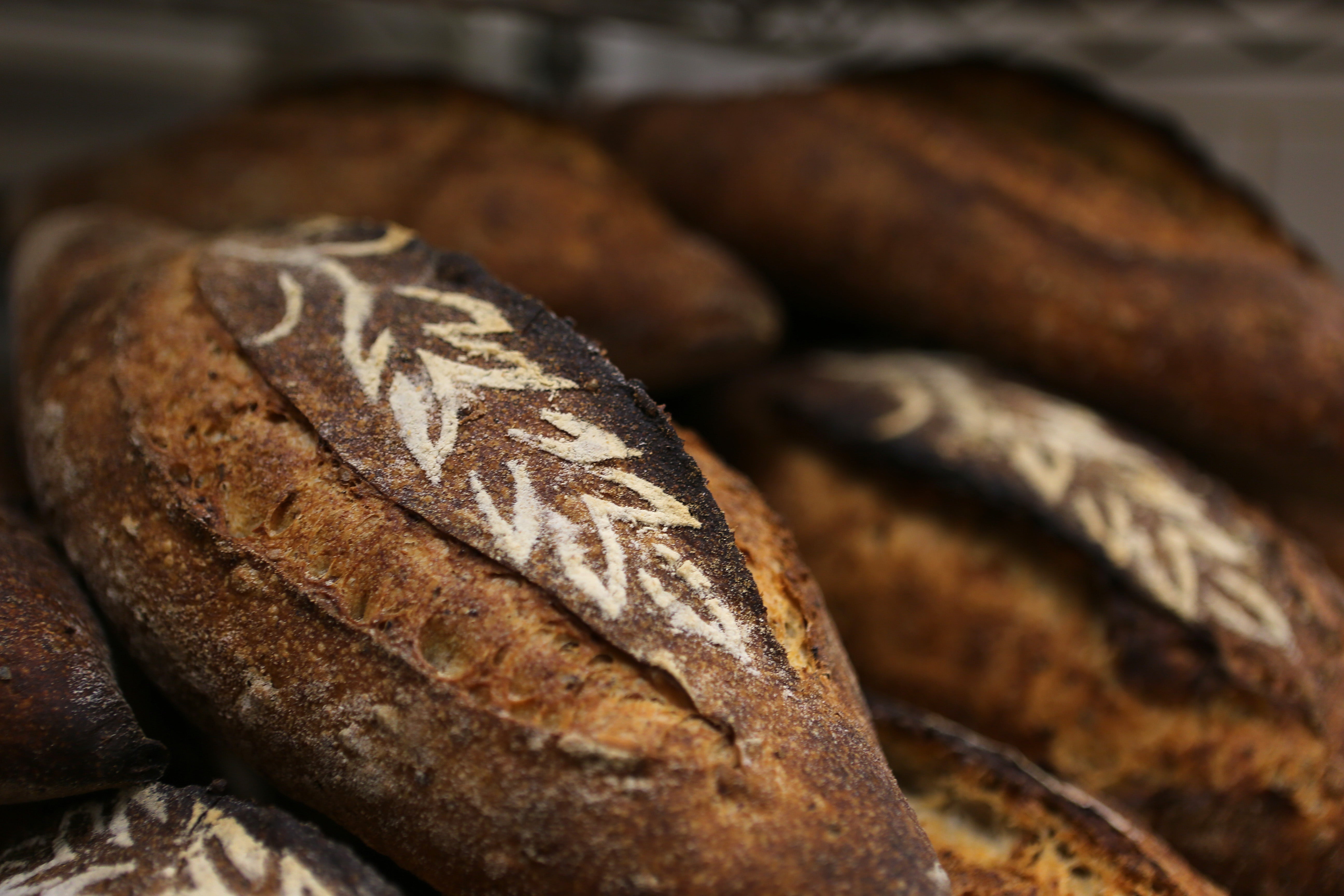 6. The Daily Catch
The original North End location of The Daily Catch (the others can be found in Brookline and the Seaport) has been cooking up simple Sicilian-style seafood dishes with pasta since 1973. The tiny one-room restaurant has an open kitchen and barely enough space for its 20 seats, which can lead to impressive lines on evenings and weekends. Daily specials can be found on a chalkboard wall, though its homemade squid ink pasta makes a great starting choice for the uninitiated. (323 Hanover St., Boston)

7. Ernesto’s Pizza
Every Italian neighborhood needs a no-frills pizzeria famed for the size of its slices, and for the North End, that’s Ernesto’s. This two-decade veteran has more than 20 types of pizza by the slice, dipping into Americanized classics like barbecue chicken, Hawaiian, and cheeseburger along the way. (69 Salem St., Boston)

8. Galleria Umberto
Show up early, and bring cash. This mom-and-pop pizza establishment closes by 2:30 p.m., doesn’t take credit cards, and offers little in the way of ambience. But the trek is worth it for the gooey, just-burnt-enough Sicilian slices, served on paper plates and priced for a different decade. (289 Hanover St., Boston) 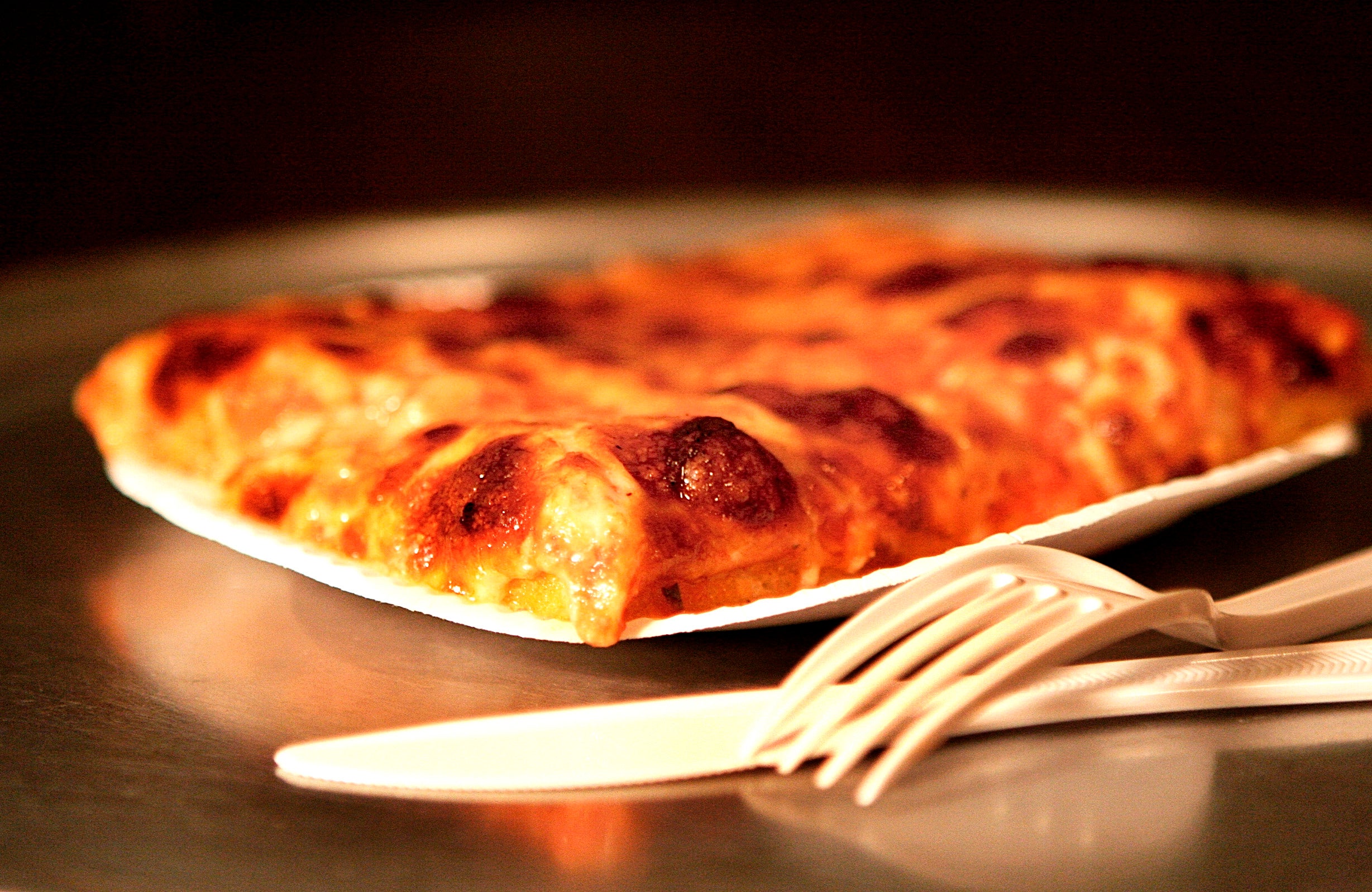 Pizza is served at Galleria Umberto.

9. Giacomo’s
If the cost of dining out has been steadily increasing, Giacomo’s hasn’t gotten the word. The simple Italian fare displayed on its chalkboard menu — and broken down into categories like “fettuccini,” “ravioli,” and “marsalas and parmigianas” — all fall under $20, with the exception of a house special zuppa di pesce (fish soup). However, the excellent value at Giacomo’s isn’t quite a secret; expect to compete with a line snaking down Hanover Street. (355 Hanover St., Boston)

10. La Famiglia Giorgio’s
Giant portion sizes are a cliché of Italian-American dining, and they’re the reality at La Famiglia Giorgio’s. However, it’s not the old story of quantity over quality. The restaurant features 10 types of homemade pasta in 21 different preparations. The gargantuan menu also includes pizza and dozens of traditional meat entrées, from veal parmigiana to steak pizzaiola. (112 Salem St., Boston)

11. L’Osteria
L’Osteria is perched on a corner of Salem Street, and its postcard-worthy appearance is boosted by brick walls, striped awnings, and window planters. The old-school charm offensive continues inside with white tablecloths and a menu that’s heavy on classic Italian pasta and meat entrées, plus a wide selection of shrimp dishes. (104 Salem St., Boston)

13. Lucia Ristorante
Situated on a quieter corner near the end of Hanover Street, Lucia has been feeding locals and tourists for more than four decades. Its offerings cover the standards — pappardelle bolognese, veal saltimbocca — plus other dishes not typically found in more strictly Italian-American restaurants, such as chitarra al tartufo, a thin pasta dish with white truffle oil, wild mushrooms, and sausage. (415 Hanover St., Boston)

14. Mamma Maria
Every dinner at Mamma Maria comes with a side of history: the corner townhouse that houses the restaurant is opposite the Paul Revere House. This white-tablecloth establishment is more fine dining than red sauce, and its seasonal menu takes account of local ingredients. Though it frequently changes, you can expect to find more upscale fare like suckling pig, rabbit pasta, and veal shank osso buco. (3 N. Square, Boston) 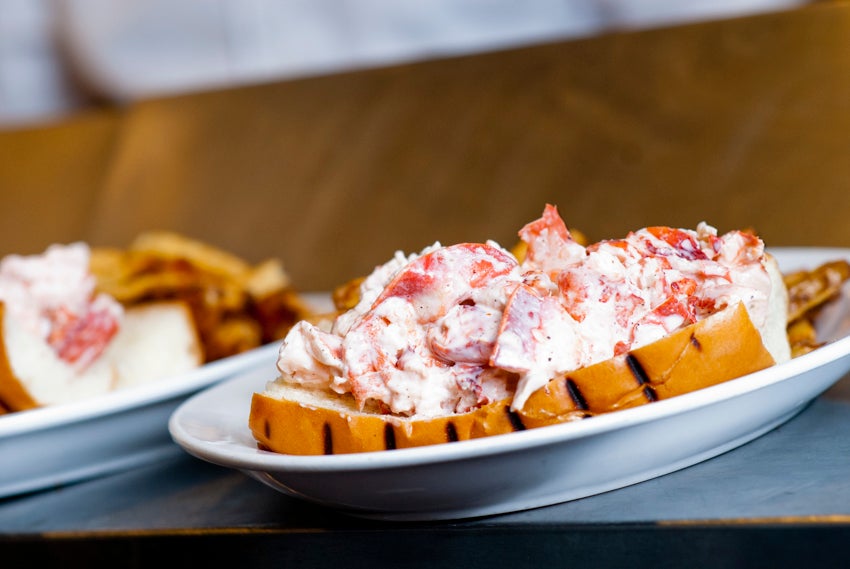 A lobster roll at Neptune Oyster.

15. Neptune Oyster
The small size, no-reservations policy, and legendary Maine lobster roll make the seats at little Neptune Oyster some of the hardest to snag in the neighborhood. Try to get there early and put your name in, then take in the rest of the neighborhood during the hour or more you’ll likely have to wait. (63 Salem St. #1, Boston)

16. Nico
The red curtains and gaudy chandeliers of this restaurant and wine bar’s dining room should be a hint that your dinner is going to fall on the indulgent side of the scale. Further evidence can be found in a more upscale menu that features dishes like crespelle all’aragosta (crepes stuffed with lobster meat) and pan-seared filet mignon wrapped in prosciutto. (417 Hanover St., Boston) 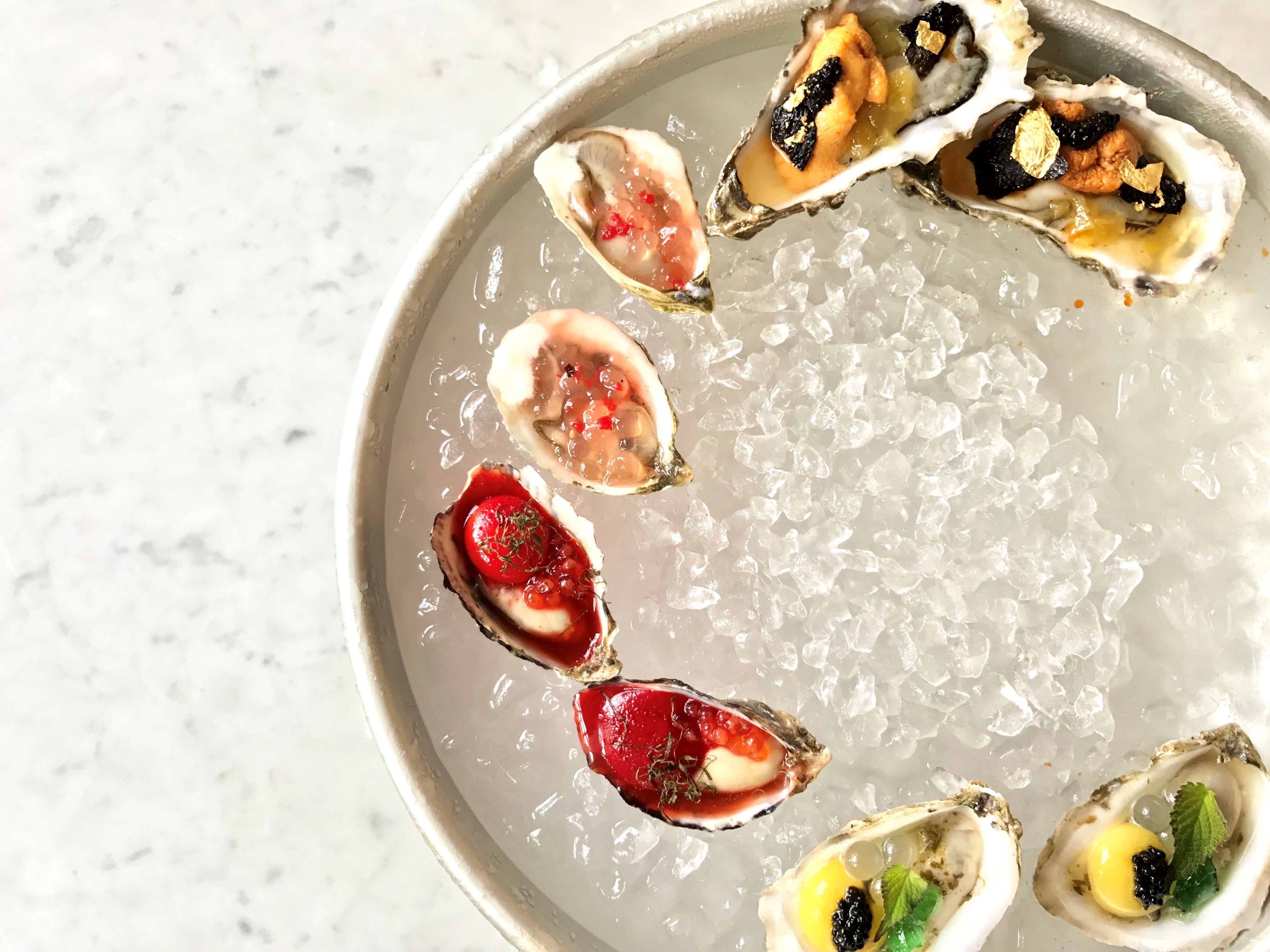 18. Prezza
Prezza combines the simple, peasant-style cooking inspired by Chef Anthony Caturano’s ancestral village (think: handmade pasta and wood-grilled meats) with a 900 label-strong wine list. A “grill night” menu is available each Monday at the bar, with dishes like grilled shrimp and pork chops at a gentler price than the main menu’s. (24 Fleet St., Boston)

19. Regina Pizzeria
The founding location of this local pizza chain has been baking thick, gloriously greasy slices since 1926. The enormous menu covers nearly every topping you could imagine, and a range of inexpensively priced wines and beers provide plenty of options for washing it all down. (11½  Thacher St., Boston)

20. Taranta
Those seeking a different type of North End experience may be satisfied by small brick-walled Taranta, which combines Southern Italian and Peruvian cooking to produce dishes like cassava root gnocchi with lamb ragu and salmon in Pisco-Sicilian blood orange sauce. This theme carries over to the dessert menu, where you can find cannoli stuffed with ricotta and guava. (210 Hanover St., Boston)

21. Tenoch
If you’ve come down with a case of red sauce fatigue, find your cure in this counter-service spot specializing in hearty Mexican sandwiches served on dense telera bread. Tenoch has more than a dozen varieties, plus tacos with less common fillings like pork skin and lamb. Outside of the North End, you can track down Tenoch’s tortas at other locations in Somerville or Medford, or queue up for its roving food truck. (3 Lewis St., Boston)

22. Trattoria Il Panino
Despite what the name implies, this three-decade-old spot offers far more than sandwiches. The menu is chock-full of pasta classics, plus Northern Italian specialties like veal chop Milanese and osso buco. An expansive patio turns the trattoria into one of the North End’s best outdoor dining destinations in summertime. (11 Parmenter St., Boston) 24. Ward 8
This moody bar with a speakeasy-type feel from the same owners of North Square Oyster may be on the North End’s far edges, but its diverse menu of classic and modern cocktails makes Ward 8 the best drink destination in the neighborhood. Pork buns and duck wings are great between-drink snacks, and provide a break from Italian fare. (90 N. Washington St., Boston)

25. Bova’s Bakery
Boston in general and the North End in particular aren’t known for late-night grub, which makes Bova’s 24-hour operating time all the more remarkable. But that’s not to say this family-owned bakery is good for boozy 3 a.m. cannoli runs alone. Its bevy of fresh-baked breads, cakes, cookies, sandwiches, and Sicilian pizza deserve to be enjoyed at any time. (134 Salem St., Boston) 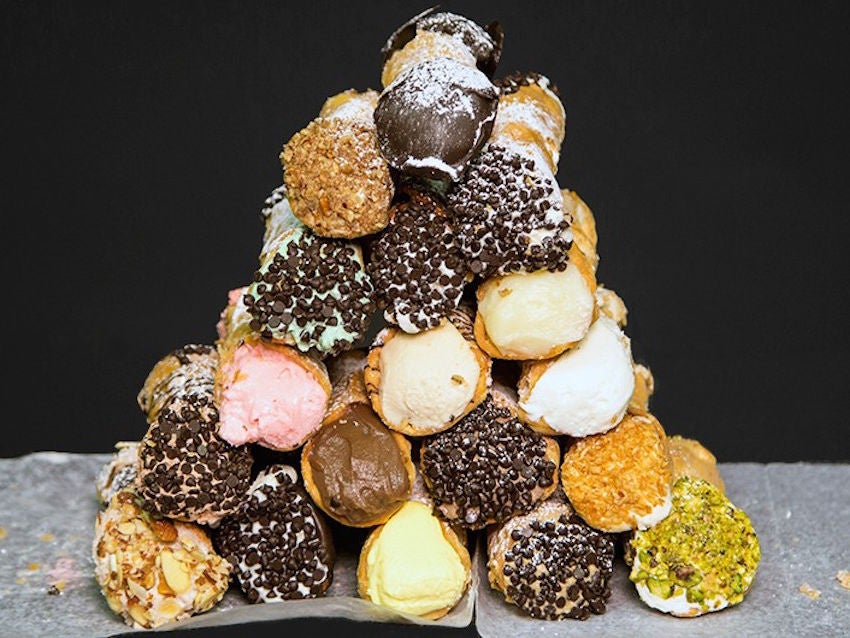 26. Mike’s Pastry
A cannoli from Mike’s Pastry is the closest thing the neighborhood has to an official dessert. To score one yourself, you’ll have to queue outside the bakery’s iconic Hanover Street storefront (or its newer locations in Harvard Square and Assembly Row). Lines can look foreboding, but they move quickly. Make sure you have cash when it’s your turn to choose between the 18 varieties of cannoli. (300 Hanover St., Boston)

27. Modern Pastry
Modern is smaller than its rival Mike’s, and tends to draw less of a line. But those who pass on the 70-year-old shop will miss out on its enormous range of baked goods that include cannoli, cakes, and pies, plus imported Italian snacks and candies. (257 Hanover St., Boston) 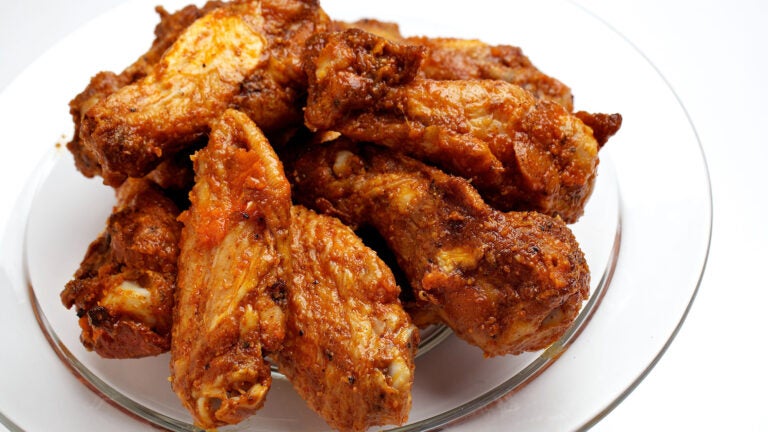