BOSTON (AP) — Robots can’t yet bake a souffle or fold a burrito, but they can cook up vegetables and grains and spout them into a bowl — and are doing just that at a new fast casual restaurant in Boston.

Seven autonomously swirling cooking pots — what the restaurant calls a ‘‘never-before-seen robotic kitchen’’ — hum behind the counter at Spyce, which opened Thursday in the city’s downtown.

Push a touch-screen menu to purchase a $7.50 meal called ‘‘Hearth.’’ A blend of Brussels sprouts, quinoa, kale and sweet potatoes tumbles from hoppers and into one of the pots. The pot heats the food using magnetic induction, then tips to dunk the cooked meal into a bowl. Water jets up to rinse it off before a new order begins. Is this a robot chef or just another high-tech novelty machine? Experts differ, but more such automation is likely headed for the fast-food sector in coming years.

A report last year by the McKinsey Global Institute said that food preparation jobs are highly vulnerable to automation because workers spend so much time on predictable physical tasks.

Currently, there’s one big thing holding back the chefbots: ‘‘The human labor also tends to be lower-paid,’’ said McKinsey partner Michael Chui, making it less economical to automate those jobs. But that could change as businesses develop cheaper and more efficient robot chefs.

Spyce has those, and automated order-taking kiosks to boot, although it still employs plenty of humans. Founded by four former MIT classmates who partnered with Michelin-starred chef Daniel Boulud, the restaurant has hired people to do the trickier prep work — parboiling rice, rinsing and chopping vegetables, cutting meat and reducing sauces in an off-site commissary kitchen. It also employs a handful of people for customer service and to garnish the robot-cooked blends with fresh toppings.

But the mesmerizing machinery, equipped with dozens of motors, sensors and moving parts, is the real draw. 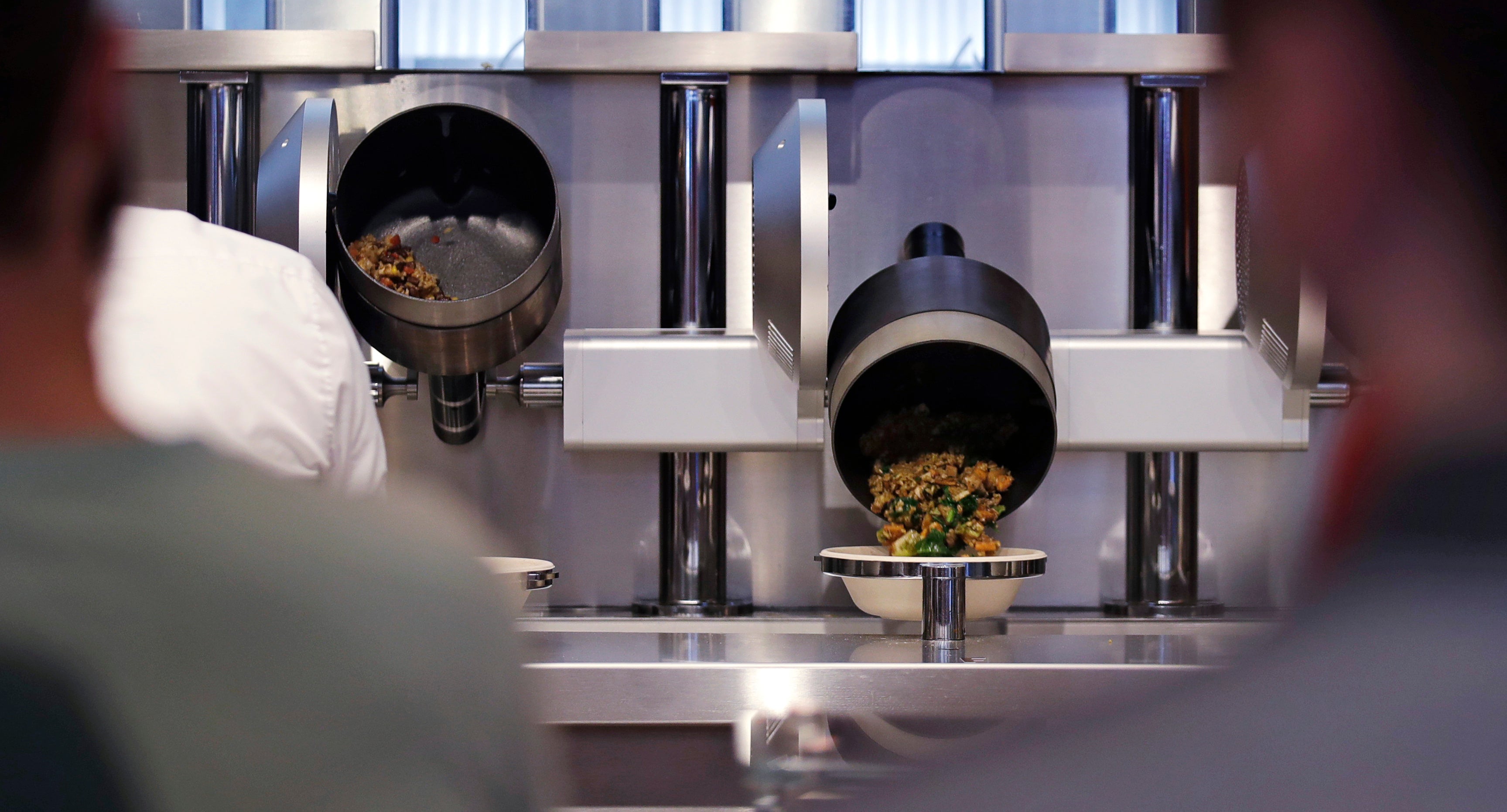 ‘‘The openness of the design was something we knew we wanted from the beginning,’’ said Brady Knight, a co-founder and engineer. ‘‘It is kind of a show. It’s fun to see what’s going on behind the scenes. We didn’t want to hide anything because we think what we made is pretty cool.’’

Automation in the food industry isn’t exactly new, though it’s often unseen by customers. Think of the chocolate factory conveyor belt that led to comedic mishaps in a famous ‘‘I Love Lucy’’ episode in the 1950s, or machines that wash dishes and brew coffee. There was also the early 20th century fad of waiterless ‘‘automat’’ cafeterias that served hot food when customers fed a coin to open a glass door.

But while food processing machines are prized for their speed and hygiene — ‘‘our robot doesn’t get sick,’’ Knight said — they have a harder time handling the complexities of fresh food.

In Mountain View, California, the founders of Zume Pizza spent years tinkering with a robotic kitchen that can form pizza dough, apply tomato sauce and transfer the pizza in and out of the oven. Other jobs that require more dexterity and judgment — such as layering on toppings — are left to humans, and the robot only performs tasks it can do dramatically better, CEO Alex Garden said.

Garden said his philosophy is that ‘‘automation exists to improve the quality of human life,’’ so he invests savings from the increased productivity in higher wages for employees and higher-quality ingredients for customers.

Spyce’s founders said they chose a relatively simple type of meal — grain bowls — and avoided trying to use robotic arms . With each ‘‘degree of freedom,’’ a robotics term for movement on a joint or axis, more things can go wrong with the machines, they said.

‘‘Butchering is pretty hard to do,’’ said Chui, the McKinsey partner. ‘‘On the other hand, machines do a pretty good job of taking the kernels out of corn and a lot of sorting tasks.’’ 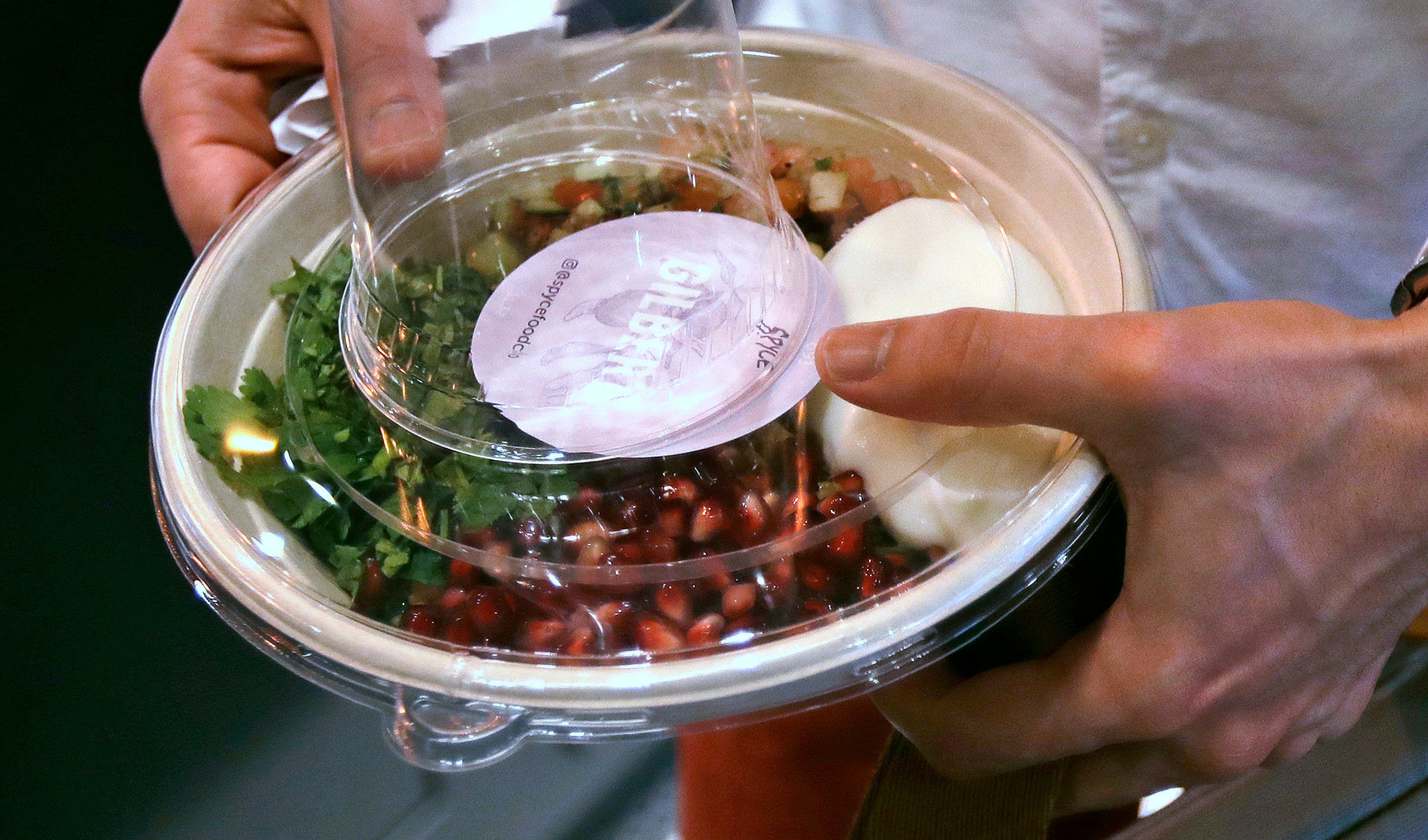 Restaurants marketing themselves as powered by robots or automation have grabbed attention from gawking first-time customers in recent years, but haven’t usually lived up to the hype. In 2007, a sit-down restaurant in Nuremberg, Germany, began delivering food by gliding it down curvy rails and onto a big turntable.

The restaurant’s owner, Michael Mack, told The Associated Press at the time that he was trying to eliminate ‘‘uncomfortable’’ fast-food experiences such as long lines, carrying meals to the table and cleaning up.

The restaurant has since closed. Its online reviews complain of high prices and traffic jams involving backed-up serving pots.

Also stalled is a burger-flipping robot named Flippy that was put on leave from a Southern California restaurant just days after its March debut. Its maker, Miso Robotics, said Thursday that the robot should be back in service later this month after some tweaks to speed up its performance.

Spyce has generated enthusiasm among downtown Boston office workers, though technology experts in a city known for spawning robotics startups aren’t sure what to call it.

‘‘I really wouldn’t consider that a robot,’’ said Tom Ryden, director of Boston-based startup incubator MassRobotics, who reserves that definition for a device with the ability to react to its environment.

But Ryden said he’s still eager to join the lunchtime crowds in trying it out. 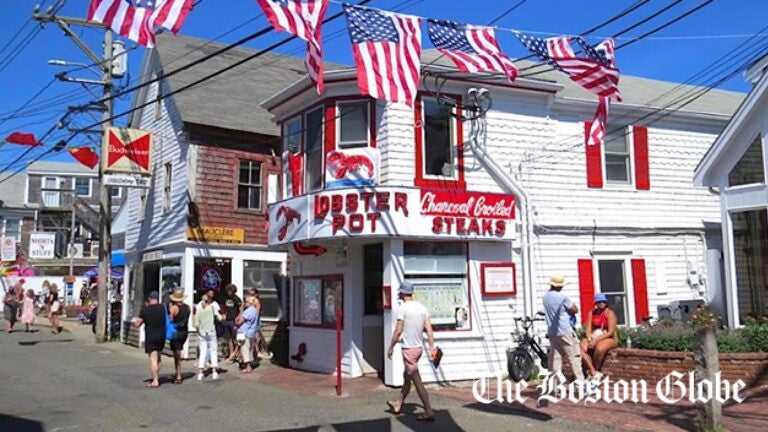