Imagine you had one night left in Boston before you had to leave the city forever. It’s a terrible thought, we know, but just go with it. In this nightmare scenario, what meal in the Boston area would be your last?

What dish do you find yourself coming back to again and again, telling every one of your friends that they absolutely must try it?

We reached out to prominent Bostonians, ranging from acclaimed chefs to TV anchors to athletes, and asked them to name that one special dish they think every Bostonian must eat. Here are their answers.

Every Bostonian must eat…

1. The bison Bolognese at The Abbey
“They stack fresh linguine with a beautiful and delicious pile of Romano cheese and bison meat. It’s amazing and it gets my vote as the best Bolognese in the city.” —Tom O’Keefe, founder of Boston Tweet

2. The chicken wings at The Smoke Shop BBQ
“Their chicken wings are the best wings I’ve ever had. They are smoked and then fried super crispy. When I eat them, I literally have a tear running down my face, they’re so good.” —Jason Santos, chef at Abby Lane, Buttermilk and Bourbon, and Citrus and Salt 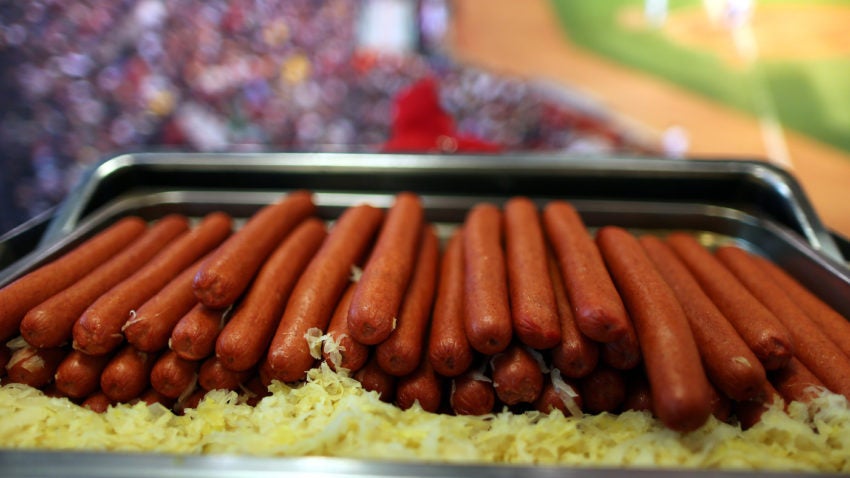 4. A Fenway Frank at Fenway Park
“One billion percent, a Fenway Frank with the spicy mustard — mustard underneath the hot dog and mustard all over the top of it. As much mustard as possible. And only after the third inning, because you need to settle in a little bit. I prefer two, not just one, because then you really get the flavor of the hot dog. And then once you really get into it, you don’t want it to be over, so you hit the second one. I’ve been eating them there since I was a little kid, and there’s really nothing better.” —Maria Stephanos, WCVB anchor

5. The $1 oysters at Russell House Tavern
“They do it every night after 11 o’clock. It’s an awesome variety of oysters. It’s just the perfect thing. If you are in the restaurant industry and you work late, you can go there every night of the week and get your oysters, and they’re so fresh and great.” —Greg Coote, beverage director at City Tap House

6. The spicy tuna salad with cucumber wrap specialty hand roll at Oishii
“It’s filled with a spicy tuna tartare, and then they top it with a shower of crispy, crunchy tempura bits. You just sort of pick it up with your hands and eat it like you’re eating an ice cream cone, and it’s so delicious.” —Michael Schlow, chef at Tico Boston and Alta Strada

Executive Chef Nimesh Maharjan prepares tagliatelle at tartufo finished in the hollow of a Parmesan cheese wheel at Tuscan Kitchen in the Seaport.

7. Tagliatelle al tartufo at Tuscan Kitchen
“They do house-made pasta that’s cooked tableside in a two-year-aged Parmigiano-Reggiano wheel. If you know anything about that cheese, the more it ages, the more incredible it tastes. They come over to you, make the pasta in a bowl for you, and then put the pasta in the Parmigiano-Reggiano, and top it with truffles. … It’s the most mouth-watering, decadent dish I’ve had, and I think everyone in Boston should try it.” —Jenny Johnson, co-host of “Dining Playbook”

8. The watercress and farro salad at Flour Bakery + Cafe
“It is divine. I typically want a salad with protein on it, but the radish, pickled beets, goat cheese, candied pistachio, and crouton elements made for a hearty salad with an awesome mix of textures and flavors.” —Christine Koh, founder and editor of Boston Mamas

9. The green bean noodles at Sichuan Gourmet
“It has some of the most tongue-tingling, burn-your-face-off Sichuan food in the area, and the service is so warm and kind. Green bean noodles are my favorite — they’re actually green bean powder, boiled to form a shimmering jelly. They’re doused in hot oil and tossed with peanuts — crunchy, spicy, addictive.” —Kara Baskin, Boston Globe food reporter

Pizza is served at Galleria Umberto in the North End.

10. The Sicilian slices at Galleria Umberto
“Umberto’s is old Boston at its finest, and for cheap eats, there is nothing like waiting in line with locals for a slice or two of some of the greatest Sicilian pizza in the Boston area, if not the entire country.” —Marc Hurwitz, founder of Boston’s Hidden Restaurants

11. Doubles at Singh’s Roti Shop
“It’s like an international sloppy joe. It’s a messy, messy dish. You eat it like a burger. Good luck. It doesn’t stay together.” —Tiffani Faison, chef at Fool’s Errand, Sweet Cheeks, and Tiger Mama

Crab and red lentil kibbeh with coconut, green papaya, and zhoug at Sarma.

13. The crab and red lentil kibbeh at Sarma
“A mainstay on the menu, I love this dish. The green papaya and coconut curry hit all my favorite notes.” —Karen Akunowicz, chef at the forthcoming Fox and the Knife

14. The fried shrimp at Momi Nonmi
“I can’t have gluten, so there’s a lot of things I don’t get to have anymore that I really miss. All of the fried stuff there is tempura-style, so…it’s gluten-free. The fried shrimp there is a dish I literally dream about.” —Jackson Cannon, bar director at Eastern Standard, The Hawthorne, and Island Creek Oyster Bar

15. The wok-charred udon noodles at Myers and Chang
“It’s like a fantastic sort of Asian chicken noodle soup. It’s a comfort food.” —Jody Adams, chef at Porto, Saloniki, and Trade

16. The Fiesta bowl at Ruta Juice Bar
“The smoothies are [also] great and it’s tasty and the type of food I’m looking for.” —Rob Gronkowski, New England Patriots tight end

17. The mini juicy dumplings with pork at Gourmet Dumpling House
“Dumplings are just one of my favorite things to eat. There’s just something so satisfying about the delicious pork tender with the juice and the ginger inside. It’s something I always love.” —Anna Perna, chef at Blackbird Doughnuts

18. The fish and chips at The Industry
“There’s a restaurant in Adams Village in Dorchester. It actually has one of the liquor licenses that was made possible through my efforts with the council and the mayor and the legislature to reform the state’s liquor license laws. This restaurant, The Industry, is incredible. The ambiance, the customer service, the culinary offerings. … Try the fish and chips. It’s up to [you] if [you] want to do truffle fries or steak fries. Either way, you can’t lose.” —Ayanna Pressley, Boston city councilor and Democratic nominee for the 7th Congressional District

A lobster roll at Neptune Oyster.

20. The lobster ravioli at Rino’s Place
“Their ravioli is not like the average lobster ravioli, with barely any shredded lobster meat.  It has big chunks of lobster, the tomato cream sauce with brandy is delicious, and it’s a huge portion. It can’t be beat.” —Mike Wyatt, beverage director at Ward 8 and Bodega

21. The pan-roasted lobster from Summer Shack
“Jasper White literally wrote the book on New England lobster, and this is his signature dish. The lobster is roasted in its own juices right in the pan with the addition of bourbon, chives, and lots of butter. This was one of Julia Child’s favorite dishes, and probably the dish I’d request for my last meal on Earth.” —Dan Andelman, host of “Phantom Gourmet”

23. Omakase at Cafe Sushi
“It’s not a dish; rather, it’s the chef’s tasting menu. Seizi and Kenshi Imura are the chef/owners of Cafe Sushi, which has been in their family since the 1980s. … I think it’s fair to call it an ‘institution.’ It’s not your Boston lobster roll or clam chowdah, but it’s certainly a ‘must’ on my list for anyone visiting town.” —Tracy Chang, chef at PAGU

Responses have been edited for clarity and grammar.