Has it taken a little longer to get your grocery shopping done lately? You’re not alone. Ever since Gov. Baker implemented a 25 percent capacity limit for most businesses in Massachusetts — a two-week mandate that went into effect on Dec. 26 and was recently extended until Jan. 24 — some shoppers have witnessed longer lines forming outside their local supermarket.

“There appears to be no limit on the amount of people shopping,” wrote one reader. “Truly horrific.”

Whether navigating lines or conducting their shopping as usual, here’s what readers had to say about their recent grocery shopping experiences.

43% of shoppers said lines were longer than usual. 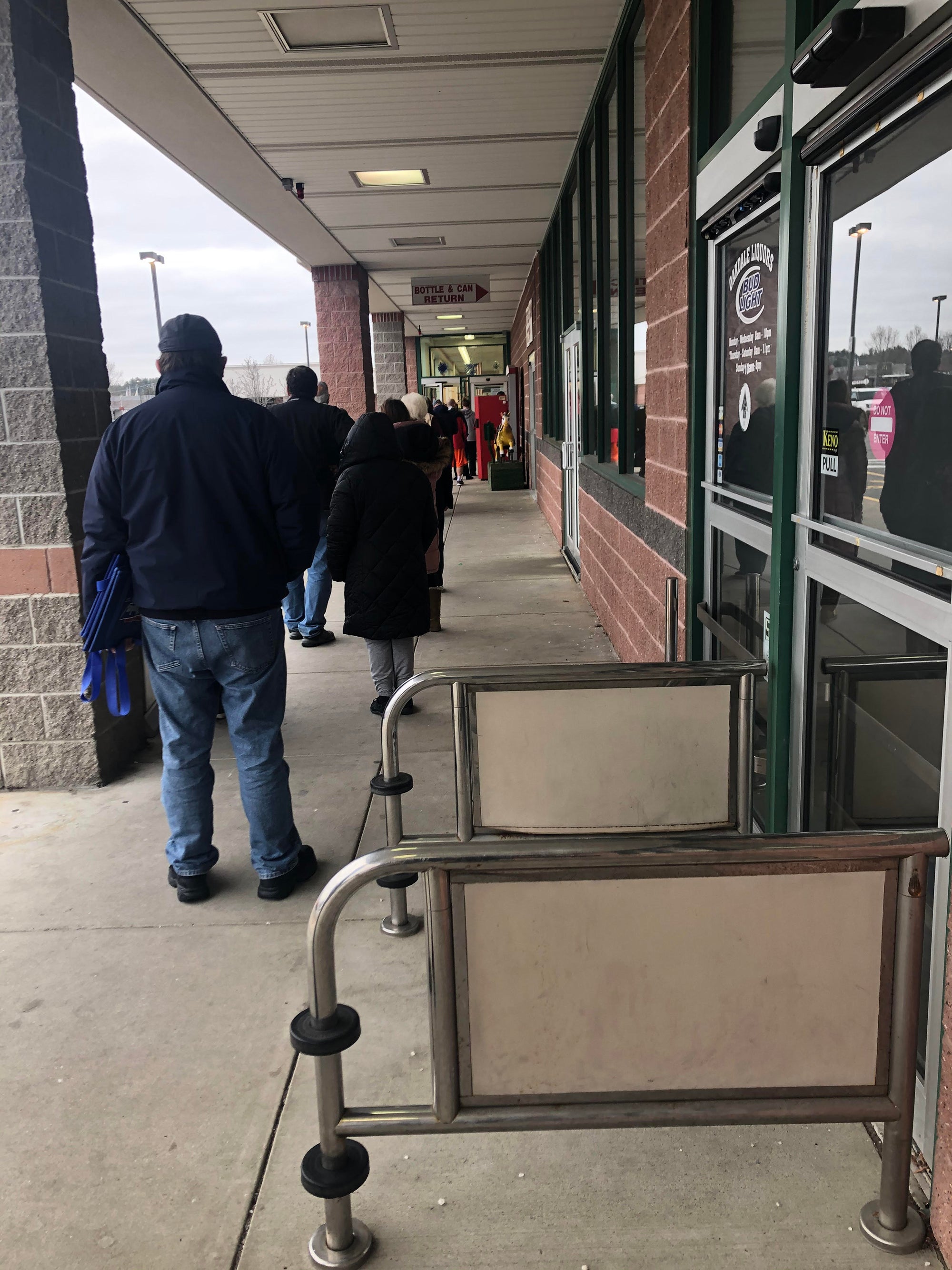 From Trader Joe’s and Market Basket to Stop & Shop and Hannaford, 43 percent of survey participants reported that the lines at their local grocery store had grown.

“It was surprising to me, because it’s winter time and the island is usually very quiet,” said one shopper who experienced lengthy lines at a Stop & Shop in Nantucket.

Another shopper, who identified as a senior citizen, shared that shopping at a Whole Foods in Cambridge had become difficult and stressful.

“Not all senior citizen[s] are early birds,” they wrote. “Also, it gets dark early. …Having decent food at home is as important as defending against COVID-19.”

“I have to buy for three visits in one visit,” he wrote. “I don’t have the time to be waiting in line for 45 minutes when my usual trip by itself would only be 45 minutes.”

Some people saw a seasonal change in line length. In response to our Facebook post, Peter Mimmo said he had witnessed long lines, “but really only in the spring of 2020 and then during the week leading up to Thanksgiving.”

Line? What line? Over 40 percent of survey respondents said they hadn’t noticed longer lines since Baker’s mandate went into effect.

“NONE of the big-box stores, nor local/state government are enforcing restrictions,” said one reader. “It’s only small, local businesses that are being targeted. Every supermarket and big box retailer I’ve visited since last March has had people jammed in the store.”

A number of people noted that grocery stores are still crowded inside, with one remarking that a Market Basket in East Bridgewater “was so crowded in certain parts of the store that it felt like the capacity limits were not being enforced. There was no line to get in and there wasn’t much of a wait at the registers either.”

Others stressed that they haven’t seen long lines because they’ve been utilizing home delivery or curbside pickup.

“I shop exclusively online for all groceries and other goods,” wrote Ro Palermo from Concord.

Readers shared how their grocery habits have changed, plus shopping tips.

Those who have experienced longer lines reported that they’ve made changes in how they shop for groceries, including where they shop.

“I have sadly started shopping at more expensive stores like Stop & Shop or Hannaford [rather] than Market Basket,” one reader wrote. “I just can’t wait outside in the cold for groceries. I am buying less since it’s more expensive as well.”

“I live in Somerville and have avoided going to the Market Basket there and go to the Star Market on Beacon St. in Somerville instead,” another wrote. “There’s a larger and newer Star Market in Porter Square nearby that gets most of the attention so few people really go to this smaller location. The stock and selection is much lower and the prices [at] Star Market are typically higher than Market Basket, but I am willing and able to pay the price for it to avoid lines and other people.”

“Things feel pretty aggressive in supermarkets,” a reader responded. “My visits are shorter, only at odd hours, and only for specific things. And many items I now choose to do without or order online. Not worth my [peace] of mind to be in a store for too long. It isn’t the virus — it’s the selfish, rude, challenging people.”

In order to make the most out of their shopping trips, readers gave tips on how to avoid potential lines or crowds. Many advised going early in the morning or an hour before closing, shopping less frequently, and going with a list to “get in and out quickly.”

Others advised switching to curbside pickup or online shopping, using services like Amazon Fresh or Instacart.

And for some, shopping during the pandemic has become an unexpectedly thrilling adventure.

“Just like in wartime Europe, I carry a bag at all times and buy what may be available in tiny local stores,” said Judy from Somerville. “It’s exciting when I find an avocado or fresh fruit.”