The music should be pumping and the burgers and jerk chicken wings flying out of the kitchen this holiday weekend at The Rambler Kitchen + Tap in the North Center neighborhood of Chicago.

To wash it down, patrons might go with a mixed drink or one of the 20 craft beers the bar sells. But many will order a hard seltzer. The Rambler expects to sell close to 500 cans in flavors such as peach, pineapple and grapefruit pomelo.

“We’ll sell a lot of buckets of White Claw and Truly seltzers,” said Sam Stone, co-owner of The Rambler. “It’s going to be a big summer for hard seltzer.”

The Memorial Day weekend kicks off what many hope will be a more normal summer, when kids start counting down the number of days left in school, people head back to the beach and grills heat up for backyard parties that went poof last year because of the pandemic. And for the hard seltzer industry, it is the start of a dizzying period when dozens of old and new competitors vie to be the boozy, bubbly drink of the season.

A grown-up cousin to fizzy seltzer waters such as LaCroix, alcoholic hard seltzers became a sensation before the pandemic, racking up around $500 million in sales in 2018, according to NielsenIQ. But in the past year, when people could not go to their favorite bars and restaurants, they picked up cases and cases of the drinks at liquor and grocery stores, sending revenues soaring to more than $4 billion in 2020.

Analysts are betting that another big wave of seltzer buying will hit this summer. Nik Modi, an analyst at RBC Capital Markets, notes that hard seltzers are popular at group gatherings, which largely did not happen last year.

“This summer,” Modi said, “is going to be a completely different ballgame.” He and others predict that annual sales will top $8 billion over the next four years.

Dave Burwick, CEO of Boston Beer, said on CNBC last year that the growth of hard seltzers was the biggest shift in the beer industry since light beers were widely introduced in the 1970s. Boston Beer, the company behind Sam Adams, also makes Truly Hard Seltzer.

While White Claw and Truly — the Coca-Cola and Pepsi of hard seltzer — capture about 70% of the market, everyone wants in on the action, drawn by the staggering growth. Old-school beer companies, spirits giants, winemakers and others are fermenting sugar solutions and adding seasonal flavors such as watermelon, black cherry and strawberry lemonade to create their own buzzy concoctions. (Care for passion fruit-orange-guava?) They are also trying to outdo one another by coming up with new variations, such as so-called spiked seltzers, which use rum or tequila; seltzers with antioxidants; and even “hard coffee.”

Boston Beer introduced Truly Iced Tea Hard Seltzer this year and a few weeks ago released an ad campaign with British pop singer Dua Lipa. This spring, hip-hop star Travis Scott released Cacti, a seltzer made with blue-agave syrup, in a partnership with Anheuser-Busch. It quickly sold out in many locations.

“People were lining up outside of the stores to buy Cacti and share pictures of themselves with their carts full of Cacti,” said Marcel Marcondes, chief marketing officer for Anheuser-Busch.

Also this spring, Topo Chico Hard Seltzer was released. The result of a partnership between Coca-Cola and Molson Coors Beverage, it hit shelves in 16 markets across the country, chasing the cult following of Topo Chico’s seltzer water in the South.

“I feel like I can walk into a party saying, ‘Oh, yeah, I brought the Topo Chico,’” said Dane Cardiel, 32, who works in business development for a podcast company and lives in Esopus, New York, about 60 miles south of Albany.

How flavored bubbly water with alcohol became a national phenomenon is partly due to social media videos that went viral and clever marketing that sold hard seltzers as a “healthier” alcohol choice.

White Claw’s slim cans prominently state that the drinks contain only 100 calories, are gluten free and have only 2 grams each of carbohydrates and sugar. The brand is owned by Canadian billionaire Anthony von Mandl, who created Mike’s Hard Lemonade.

“The health and wellness element is front and center in terms of the visual marketing,” said Vivien Azer, an analyst at Cowen investment firm. “Every brand’s packaging features its relatively low carb and sugar data.”

On top of that, the alcohol content in most hard seltzers, about 5%, or the same as 12 ounces of a typical beer, is less than a glass of wine or a mixed drink. That makes it easier for people to sip at a party or while watching a game without getting intoxicated or winding up with the belly-full-of-beer feeling.

“It’s a nice drink for an afternoon on the patio,” said Shelley Majeres, general manager of Blake Street Tavern in downtown Denver. “You can drink four or five of them in an afternoon and not have a big hangover or get really drunk.”

Blake Street, an 18,000-square-foot sports bar, started selling hard seltzers two years ago. Today, they make up about 20% of its can and bottle sales.

The industry has also neatly sidestepped the gender issue that plagued earlier, lighter alcoholic alternatives such as Zima, which became popular with women but struggled to be adopted by men.

“I’ve got just as many men as women drinking it,” said Nick Zeto, owner of Boston Beer Garden in Naples, Florida. “And it started with the millennials, but now I have people in their 40s, 50s and 60s ordering it.”

That kind of broad appeal is attractive to beer, wine and spirits companies.

“We view ourselves as the challenger brand,” said Michelle St. Jacques, chief marketing officer of Molson Coors, which has been making beer since the late 1700s but hopes to end this year with 10% of the hard seltzer market.

Last spring, the company released Vizzy, a hard seltzer that contains vitamin C. Topo Chico came this spring. “We feel like we’re making great progress in seltzer by not trying to bring me-too products, but rather products and brands that have a clear difference,” St. Jacques said.

While grocery and liquor stores have made plenty of space available to the hard seltzer brands that people drink at home, the competition to get into restaurants and bars is fierce. Most want to offer only two or three brands to their customers.

“Oh, my God, I get presented with new hard seltzer whenever they can get my attention,” said Stone, who sells six brands at The Rambler. The crowd favorite, he said, is the vodka-based High Noon Sun Sips peach, made by E.&J. Gallo Winery. “Everybody — from the big brands to small, new ones — are getting into the hard seltzer game.” 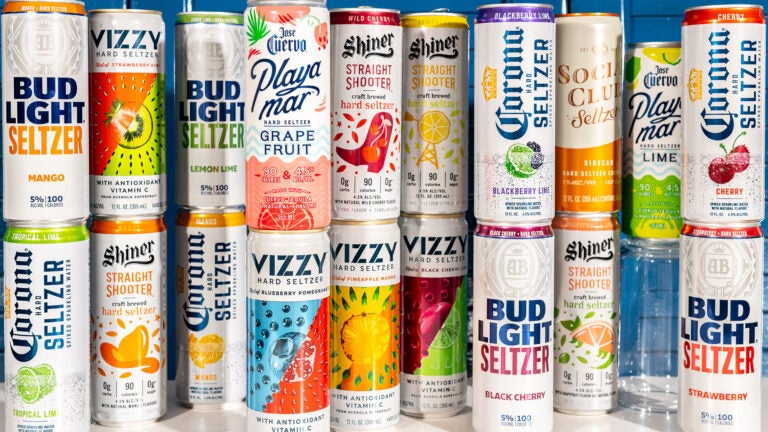 Seltzerland, a national hard seltzer festival, is coming to Massachusetts