That may be the main question posed to oyster fans looking to slurp up the pearl-bearing mollusks these days, but the shellfish has been consumed — and celebrated — every which way during its history in New England.

In the late 1800s, The Boston Daily Globe printed a bewildering variety of oyster recipes, instructing readers to serve them baked, stewed, curried, scalloped, with quail, in an omelette, or — for the truly adventurous — in a pancake.

“It was the caesar salad of its time and everyone had it,” said Boston Chef Jeremy Sewall, owner of Island Creek Oyster Bar and Row 34, two Boston-area establishments where you can consume many an oyster.

Before you choose raw or fried, consider the oyster’s history in the region. 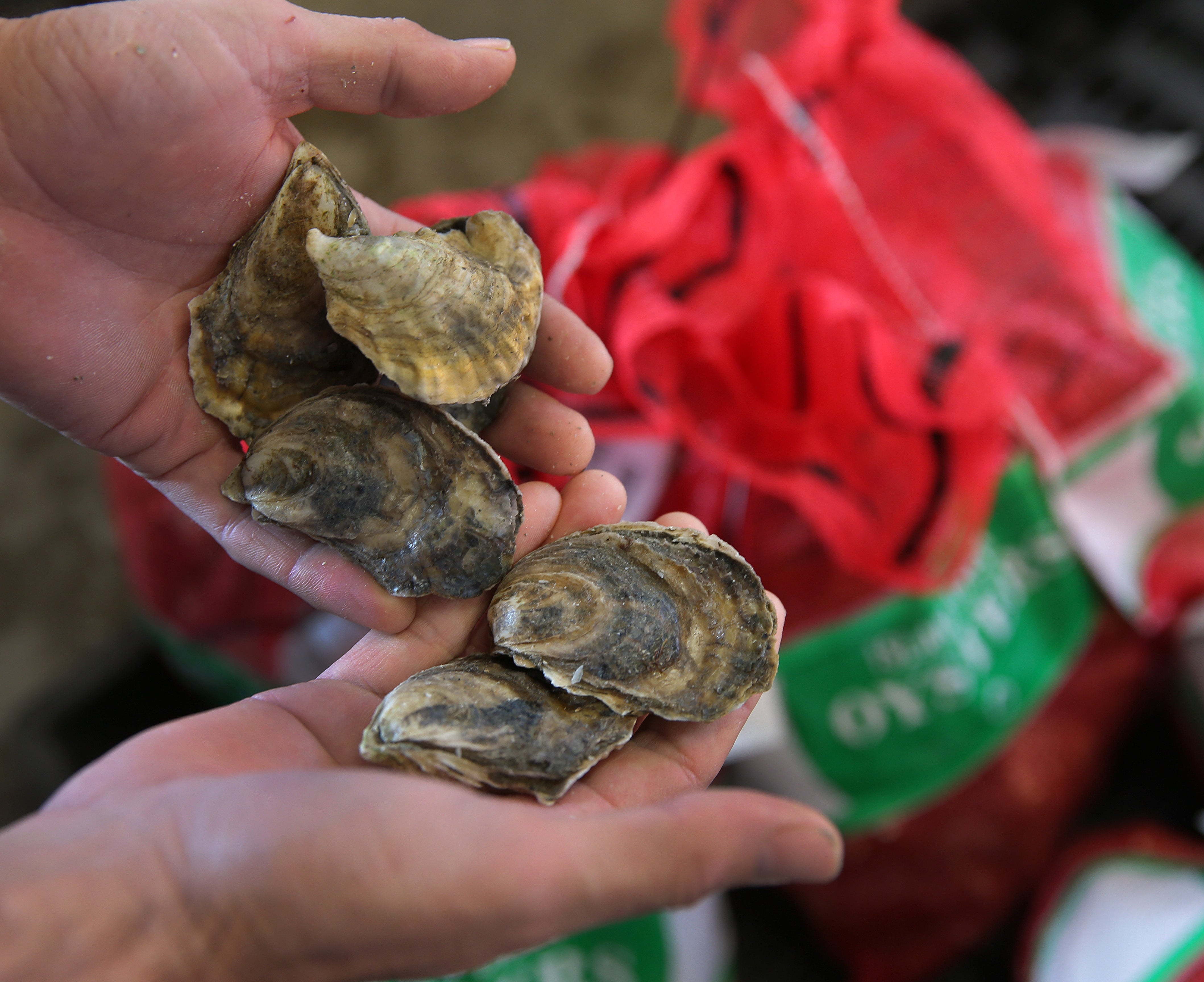 Authors Keith Stavely and Kathleen Fitzgerald, whose books include America’s Founding Food: The Story of New England Cooking and Northern Hospitality: Cooking by the Book in New England, say oyster-eating in the region goes back to unrecorded, prehistory, with Native Americans and pilgrims alike including the shellfish in their diets.

“Oysters among all shellfish are the ones that have been in both Europe and America, the most consistently popular among all levels of society, going way back,” Stavely said.

Because of that, English settlers arriving on North American shores already had their own well-established tradition of consuming the shellfish. But, Fitzgerald says, they were amazed at the abundance and size of the oysters they found in their new home.

According to Fitzgerald, a pickling recipe from the wife of a merchant dated around the time of the American Revolution begins: “Take 200 oysters, the freshest you can get.” They were so plentiful back then, she says, that barrels of pickled oysters were exported to Barbados.

“They weren’t just the way we eat them now as a special treat,” she said. “They were a really standard part of the diet.”

The abundance and popularity of oysters led to the creation of free standing “oyster houses” or “oyster saloons” in the mid-19th century, such as Boston’s Union Oyster House, where city residents of all social classes could eat a quick, inexpensive oyster lunch. The trend set the stage for modern-day oyster bars.

“You could actually stand up at the oyster bar and consume a dozen oysters for lunch,” Fitzgerald said. “And that was sort of when the tilt towards the raw oysters became more popular.”

Pan-frying and pickling were common ways of preventing the oysters from spoiling, but deep-frying fish and shellfish as a widespread practice was a development of the 20th century.

Oysters remained popular in the pages of The Boston Daily Globe during the 1800s. Recipes for “Novel Oysters” and “Oyster Cachets” are just two of the recipes published in the Daily Globe on Oct. 4, 1896. 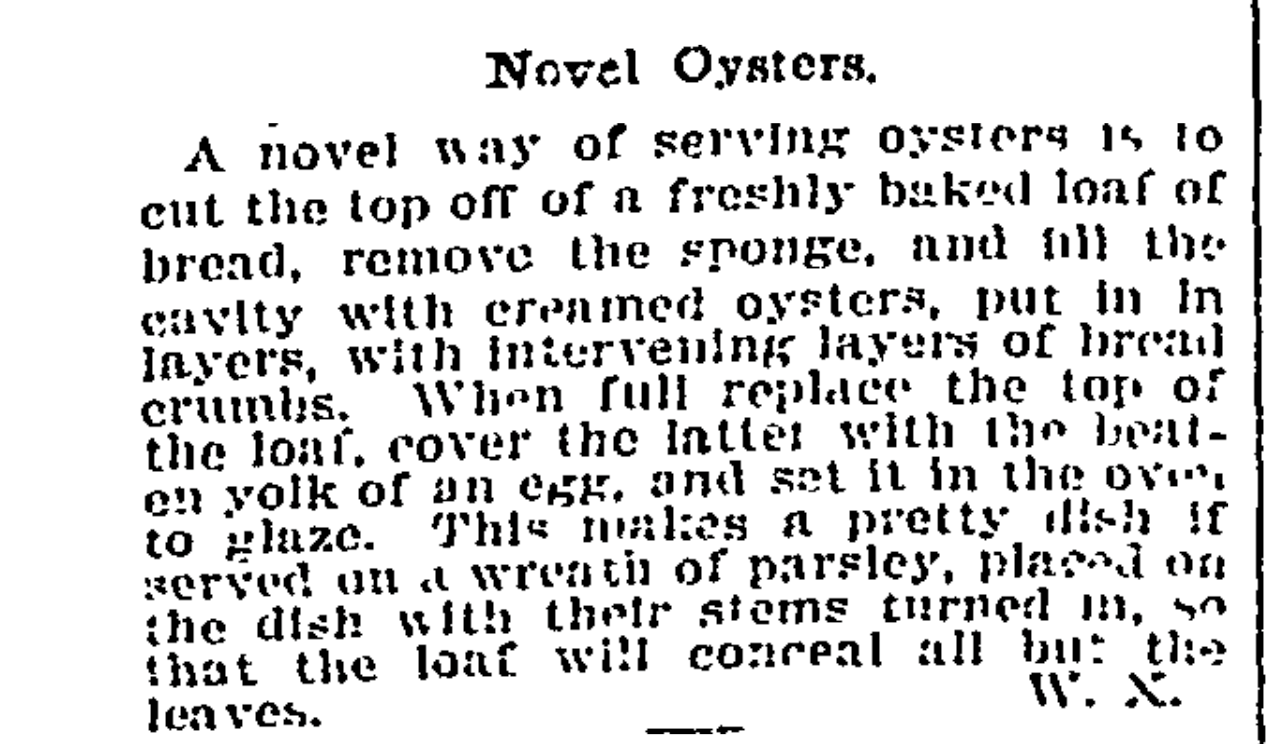 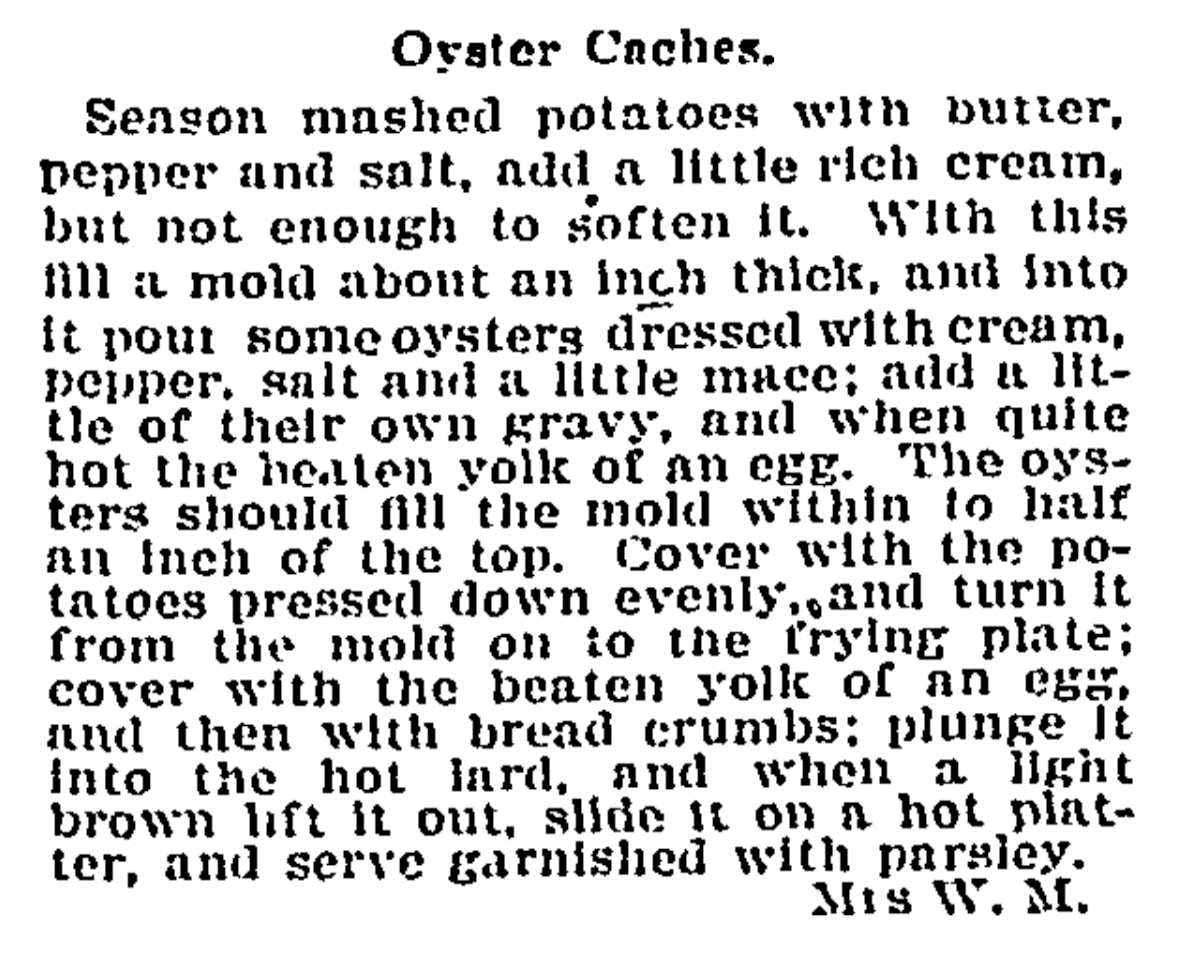 One article, “R There: The Ostrea Edulis in Season Again,” published Sept. 1, 1889, delves into the bivalve’s history and shares several recipes, including “Oysters au Naturel” (i.e. raw oysters), “Steak Stewed with Oysters,” “Oyster Pie,” and “Oyster Roly Poly.” The article starts  by heralding the return of oyster season with an undated, unauthored “poem.” 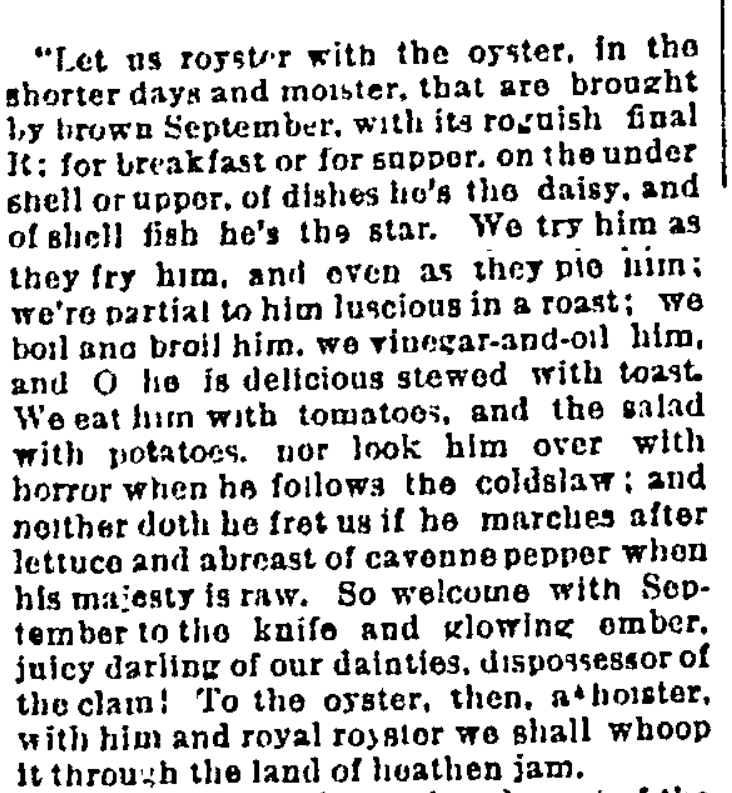 Too much of a good thing 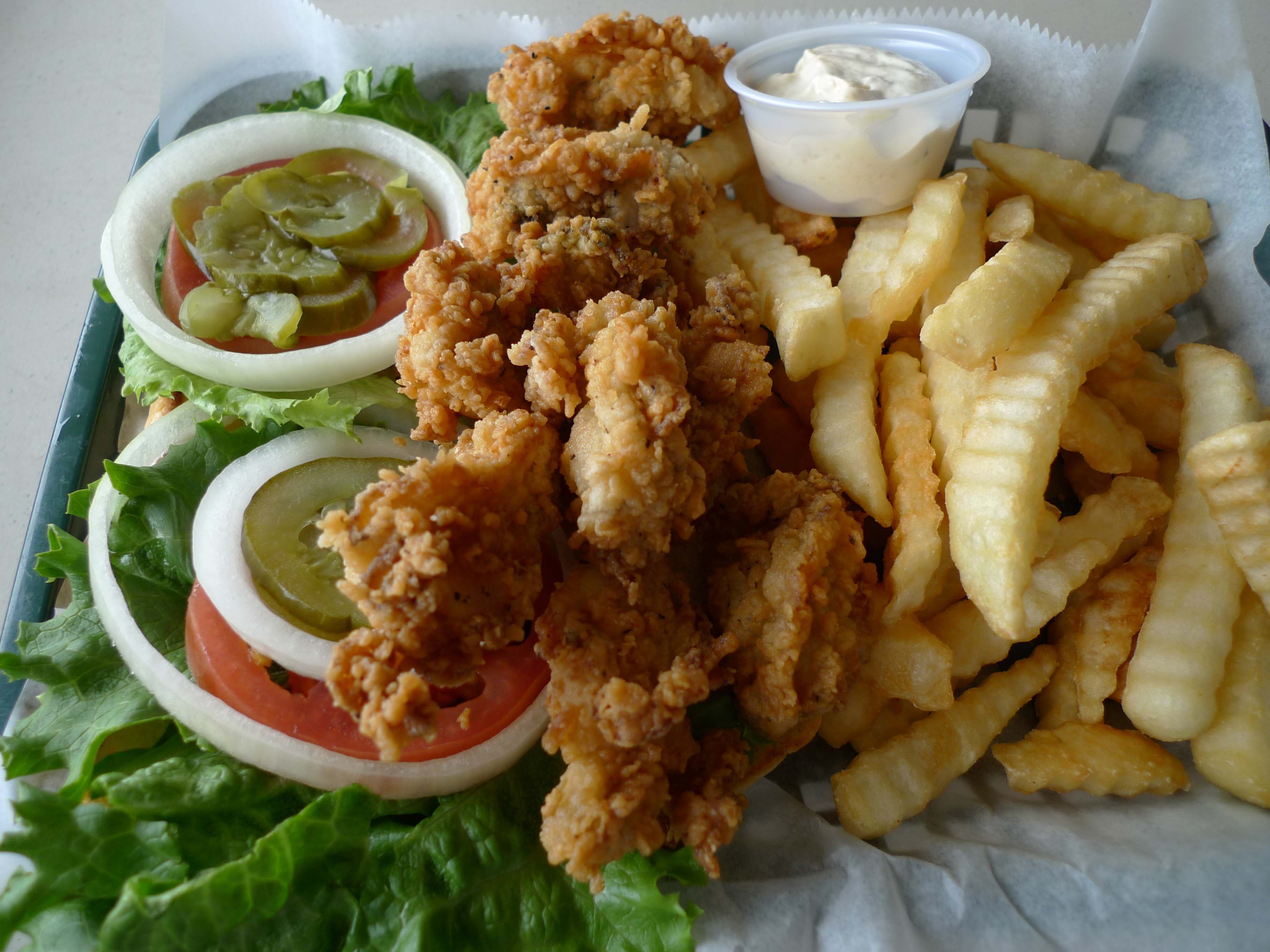 By the early 20th century, Fitzgerald and Stavely said oyster beds in New England had been “virtually fished out.” Over harvesting, coupled with pollution and the use of the waterways for commercial shipping, made it hard to maintain the oyster beds.

Then oysters became expensive and no longer something that ordinary people could have for a quick lunch, Fitzgerald said.

As the oyster industry shrank, New England turned to the promotion of other seafoods: lobsters, scallops, and clams. Oyster beds under water near the Sandwich area of Cape Cod in 2017 tended by a small fisherman’s shack.

Sewall, who partners with the Island Creek Oyster farm in Duxbury said New England is undergoing a strong resurgence of the mollusks. He estimated that between 2008 and 2014, the farmed shellfish sector of the region grew by $80 million and became the third largest fishery for New England, behind scallops and lobsters.

As for how you should eat oysters these days, Sewall said you can’t go wrong. (Try one of Sewall’s oyster recipes here.)

The restaurateur said he’ll eat the oysters raw or fried, depending on how he’s feeling.

But, he conceded, maybe he likes the uncooked version “a little bit more.”

“There’s something about raw oysters,” Sewall said. “Beautiful raw, fresh oysters, beautifully shucked, with lemon on them — that’s a food in the purest form. And I just think there’s something kind of romantic about eating raw oysters.”