On the corner of Centre Street and Forbes Street in Jamaica Plain, a spray-painted refrigerator sits on the sidewalk. The words “free food” are written across the top freezer in white letters; underneath that in Spanish, “comida gratis.”

The fridge has stood in front of D’Friends barbershop since September 4, after a group of organizers began a grassroots initiative to launch community fridges throughout Boston. Open the fridge door on any given day and you’ll find cartons of milk, bunches of kale, apples, tortillas, cans of beans, crackers, and pre-made meals. A sign taped to the side lists the fridge rules: Anyone can take from or give to the fridge. Rescued food is best. Produce must be clean and in good condition. And prepared food must contain a label listing the ingredients, when it was made, and an estimated expiration date.

With one in eight people in Eastern Massachusetts expected to face food insecurity in 2020 as a result of the coronavirus pandemic, cities are finding innovative ways to help feed their neighborhoods — including setting up community fridges. Veronica Bettio, who helped launch the Jamaica Plain community fridge, said that she got the idea after hearing about a similar program started by In Our Hearts NYC.

“Sometime in July or August, I was seeing a lot of community fridges pop up around New York,” Bettio, a New York native and Jamaica Plain resident, said. “I started asking [IOHNYC] for guidance. They even had a couple of how-to guides on their Instagram. The idea was to put it out there, mostly through social media, that you want to start a project like this, and people will come to you and want to be a part of it. And that’s exactly what happened.” 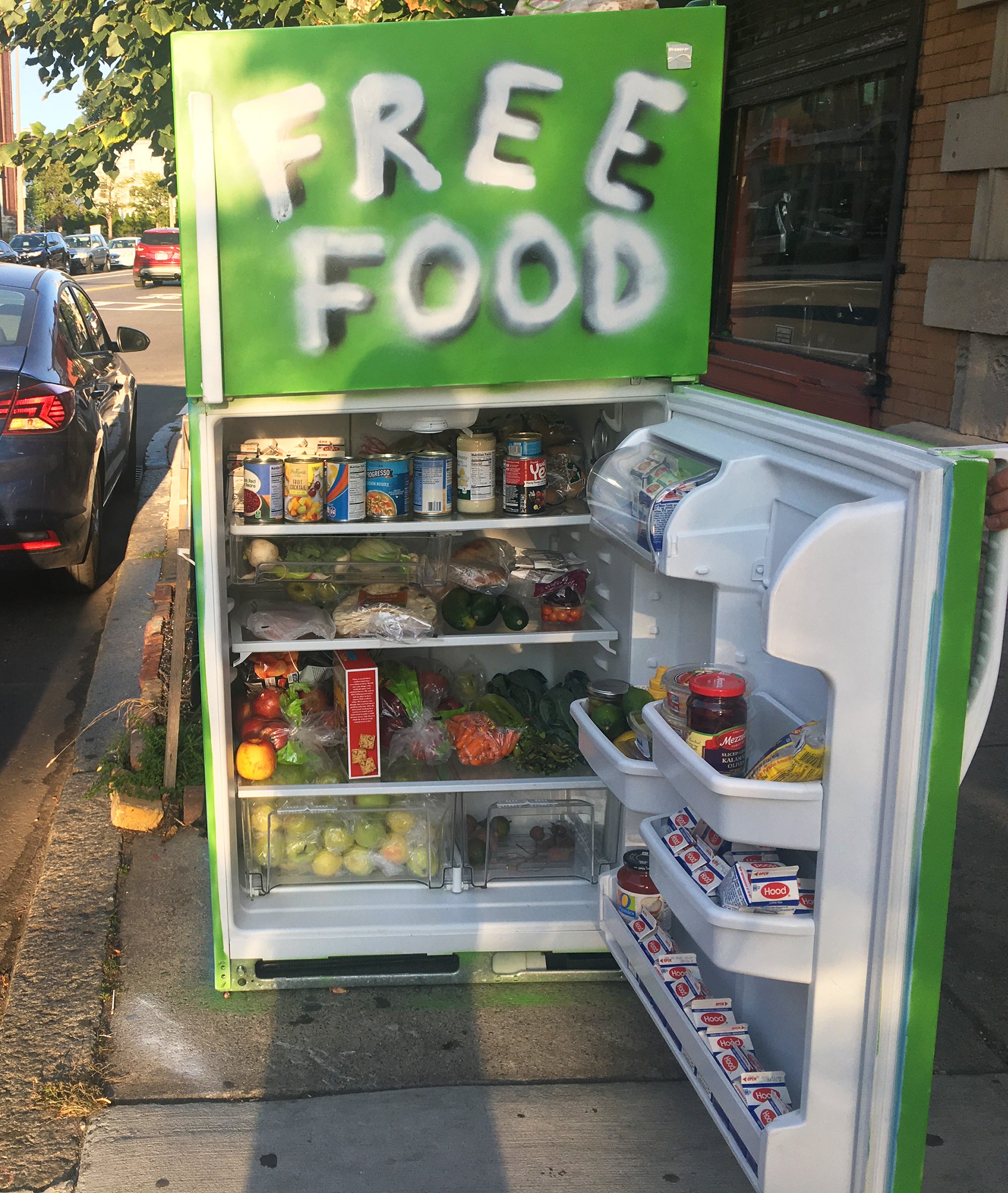 Bettio posted a call-out for volunteers and organizers on her personal Instagram page, which eventually evolved into launching @bostoncommunityfridge. Another organizer, Josiel Gonzalez, obtained a fridge from his parents, and Jamaica Plain business D’Friends barbershop offered to cover the cost of electricity. After the fridge was installed in early September, other food businesses and farms volunteered to keep the fridge well-stocked: Allendale Farm donates produce every Friday, and When Pigs Fly bakery offers bread when they have extra loaves. It’s the entire community, Bettio said, that truly powers the fridge and its purpose.

“It really is about community trust and community care,” she said. “You kind of have faith in the idea that you’re trusting the people who are putting food in this fridge because they care about the people in their community.”

Bettio said that neighborhoods throughout the Boston area — including Allston, Cambridge, Dorchester, Roslindale, and Somerville — have started organizing their own community fridges. Dorchester will receive its own fridge at 1471 Dorchester Ave. in Fields Corner on Tuesday.

“Our efforts were definitely inspired by Veronica and the crew out in Jamaica Plain,” said Jamison Cloud, a local artist and one of the Dorchester community fridge organizers. “I’ve had a lot of community support and backing.”

Cloud said that volunteers will check the fridge at least three times a day to make sure it’s clean and full, and that they have already partnered with Brookwood Community Farm to help stock the fridge once or twice each week. The group is still looking for more partners — and, of course, hopes that the community will both contribute to and benefit from the new addition on a regular basis. The organizers are also building a shed to erect around the fridge in order to protect it from the elements, making it available 24 hours a day, seven days a week, 365 days a year.

“I think, particularly in Fields Corner, there’s a lot of gentrification going on right now, and I feel like the heart of the community isn’t necessarily there anymore,” Cloud shared. “There’s a disconnect with folks. This is a great way to bring love and care back into the neighborhood and show folks [that] we are here to support one another. This isn’t any sort of charity, this is just people being kind to one another — that’s how I’m looking at it at least.”

Bettio also sees it as a way for the community to look out for one another — especially during a time when so many people need an extra hand.

“For me, it was very much like — we’re stuck in this pandemic, and the government doesn’t seem to be helping the people who need it,” she said. “What can we do to give to people who need it, to reduce food waste, to make some sort of small but impactful change, when it feels like so much is out of our control? So many people deserve community support.”