As the coronavirus pandemic continues to affect millions of families across the country, hunger and food insecurity have reached startling levels, including in Massachusetts.

Massachusetts is facing the highest projected percentage increase of food insecurity in the United States, at 59 percent from 2018 to 2020, according to an October analysis from Feeding America. The percentage of Massachusetts children facing food insecurity has increased by an alarming 102 percent during that same period, with one in five children now struggling with food insecurity, the organization’s report said.

The skyrocketing demand has been felt at food banks and pantries across the state since the start of the pandemic. Officials say it shows few signs of slowing down.

“Since the beginning of the pandemic, we have averaged nearly 10 million pounds of food distributed per month, which is over 60 percent more food than we distributed last year during the same period of time,” Catherine D’Amato, president and CEO of the Greater Boston Food Bank, told Boston.com. “Our largest distribution month to date was in June, when we distributed 11.5 million pounds, which equals nearly 9.6 million meals.”

D’Amato shared that demand has remained relatively consistent since then: The food bank distributed around 2.5 million pounds of food per week in the past two weeks. To keep up with the volume, the organization, which distributes food to more than 500 partner agencies and 70 direct-distribution programs across eastern Massachusetts, has trucks on the road six days a week and has added four full-time and two part-time warehouse employees, as well as three temporary team members.

Its partner agencies, which include food pantries, senior centers, and soup kitchens, are affected as well.

“People are so unaware of how big food insecurity is,” said Arielle Chernin, operations director at the Brookline Food Pantry. “I grew up in Brookline, and had no idea that there was such a large part of Brookline’s population that was in low-income housing or food insecure, and it was very eye opening for me. So many people think of Brookline as such a wealthy town and to see such a big disparity and for it only to be getting bigger is kind of alarming.”

Chernin told Boston.com that, pre-pandemic, the Brookline Food Pantry saw 150 guests come through its doors week. That number has more than quadrupled, jumping to 650 each week since the beginning of the pandemic.

While Chernin said the pantry recently added a third full-time employee to the organization, its staff is 99 percent volunteer-based and, thankfully, has met the rise in demand.

“When our client demand quadrupled, our volunteer base also quadrupled,” she said. “People were looking for things to do after the initial craziness of quarantine settled, and we saw a huge increase in the number of people that wanted to volunteer. We have an incredible pool of volunteers that do everything from dumping recycling to packing bags to building our website.”

Clients frequenting the Brookline Food Pantry come away with three paper bags: one full of fresh produce, one full of dry foods, and one with refrigerated items, like milk, butter, and eggs. The pantry purchases some of its food from the Greater Boston Food Bank, but also receives items from Lovin’ Spoonfuls and through partnerships with bakeries like Clear Flour Bakery and When Pigs Fly. Individual donations from the public often result in some one-off items like gluten-free pasta or coffee. Chernin said that paper bags are always in need.

While the Brookline Food Pantry is still accepting food donations, the Greater Boston Food Bank and many of its partner food pantries have put a hold on individual walk-in donations due to COVID-19, citing a monetary donation as the best way to help the organization purchase food and keep up with the staggering demand.

But there are still a number of ways you can donate boxes of pasta, canned beans, rice, and other items to help feed those in need. Here’s a running list of local organizations that are currently accepting food donations. To make a monetary donation to the Greater Boston Food Bank, click here.

Boston Food Not Bombs: This organization accepts vegan, shelf-stable food, which can be dropped off during its cook and serve time on Saturday from 9 a.m. to 3 or 4 p.m., depending on when they run out of food. Alternate drop off times can be arranged by emailing [email protected]. (14 Harvard Ave., Boston)

Boston Rescue Mission: As a shelter for guests who are experiencing or on the brink of homelessness, Boston Rescue Mission provides basic necessities to those in need, including shelter and healthy meals (last year, the organization served more than 143,000 meals). To donate perishable and non-perishable items, contact Dennis Gaskell, food service manager, at 617-290-2693. (39 Kingston St., Boston)

Cafe Landwer: The cafe is currently running a food drive for the Brookline Food Pantry, accepting donations for the pantry’s in-demand goods that include rice, cereals, pastas, canned soups, fresh produce, and healthy snacks for kids. Drop off five items at either of the cafe’s locations (Cleveland Circle or Audubon Circle), and you’ll receive a $10 e-gift to the cafe. (383 Chestnut Hill Ave., Boston; 900 Beacon St., Boston)

Community fridges: Drop off canned goods, fresh fruit, and more at one of the Boston area’s community fridges, which have grown in numbers over the past few months. Find fridges in Allston, Jamaica Plain, Dorchester, Somerville, Roslindale, and Fenway; some, like Roslindale, are organizing their own holiday food drives. (Various locations)

East End House: The Cambridge organization is looking for food donations detailed on its wish list, including pantry staples like sugar, flour, jam, syrup, and a number of beverages. (105 Spring St., Cambridge)

Project Soup: As part of the Greater Somerville Homeless Coalition, Project Soup has helped Somerville residents fight hunger for the past 50 years. Current food donation requests include masa, cereal, solid white tuna, instant coffee, and olive oil. Call 617-776-7687 during open hours to arrange a drop off, or make a delivery to the pantry during Project Soup’s hours of operation. (1 Davis Square, Somerville)

Rebel Rebel: Somerville wine bar Rebel Rebel has launched a food drive that will run until the end of 2020, and has asked guests to donate non-perishable items and toiletries to their drop box outside the bar during open hours. Donations will be given to Project Soup (see above). (1 Bow Market Way, Somerville)

Rosie’s Place: Rosie’s Place advocates for women in need, helping them find stability during times of poverty or homelessness. There are three ways to help stock the organization’s food pantry from your own home: Shop from a list of much-needed pantry staples, sponsor your own virtual food drive, or make a cash donation. (889 Harrison Ave., Boston)

The Open Door: Gather your excess peanut butter, spaghetti sauce, breakfast cereal, and more items on The Open Door’s wish list, which can be dropped off Monday through Friday from 9 a.m. to 5 p.m. (28 Emerson Ave., Gloucester) 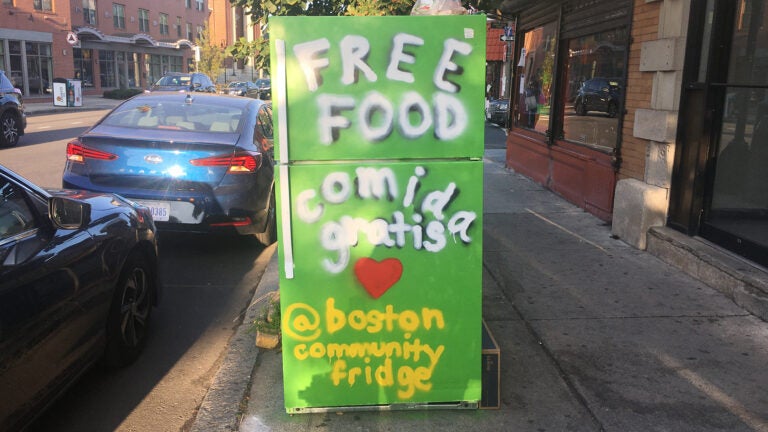 In an effort to help feed those in need, community fridges are on the rise in Boston