Residents of cities like New York and Chicago seemingly enjoy arguing over the superiority of their respective town’s pies. Bostonians, however, just like to eat theirs. Below are 25 standout pizza options in Boston, plus a little about what makes each spot’s pizzas so special. 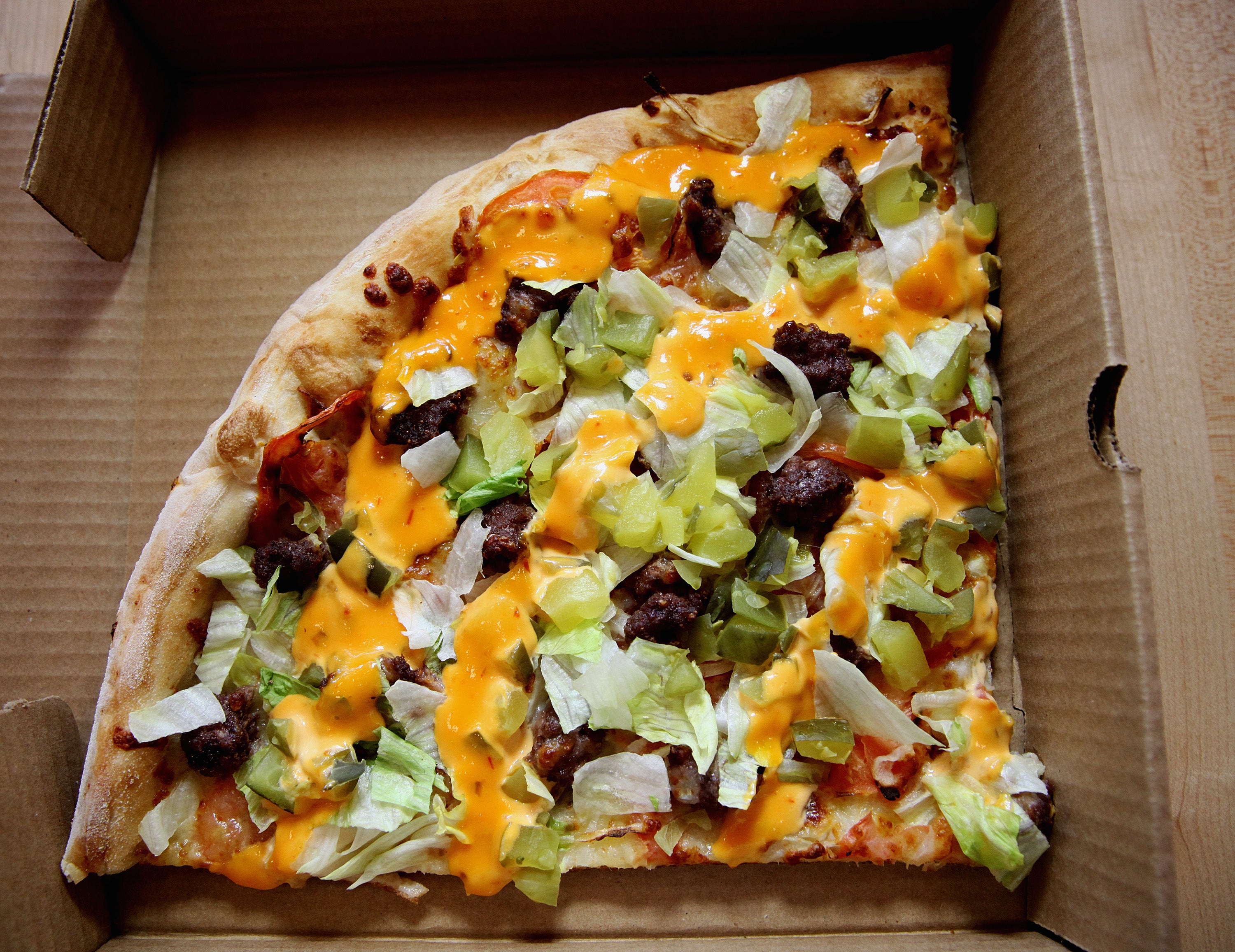 Cheeseburger pizza from Ernesto’s in Somerville.

Armando’s
This quaint, family-owned, and cash-only pizzeria has been part of the Huron Village area of Cambridge since 1971. Order one of the cheesy, New York-style slices with thin crust or one of the thick, Sicilian-style slices. (For the uninitiated, Sicilian pizza has a thicker crust than the Neapolitan variety and comes in a square shape.) (163 Huron Ave., Cambridge)

Emma’s
This beloved spot, which recently shut its Cambridge location and put the focus on its new South End one, is still churning out the thin crust pies it was known for at its original spot. Consider the People’s Republic, with bacon, scallions, gorgonzola, and house-roasted tomatoes. (537A Columbus Ave., Boston)

Ernesto’s
It’s no surprise that the North End is teeming with pizza options, but none of them is quite like Ernesto’s. The tiny storefront is a favorite of locals and tourists alike for massive slices that cost only $4-$5, depending on toppings. Grab one, then go for a walk along the Greenway on a nice day. Ernesto’s second location is at Assembly Row in Somerville. (69 Salem St., Boston; 641 Assembly Row, Somerville)

Galleria Umberto
Galleria Umberto is a longtime favorite of North End residents and Financial District workers looking for a quick lunch. While the restaurant sells thin crust slices, it’s known for Sicilian—and for selling out before its closing time of 3 p.m. (289 Hanover St., Boston)

Regina Pizzeria
Follow the neon sign on Thatcher Street in the North End to Regina Pizzeria, the original Regina’s location that opened in 1926. The pizza here hits all of the same notes as the pizza of your childhood: slightly sweet tomato sauce with a touch of acid, salty cheese that’s browned in some spots, and a crust that does its best to hold up under the weight of the toppings, but can’t. (11 1/2 Thacher St., Boston)

Santarpio’s
The no-frills dining room at this cash-only East Boston establishment is always packed with locals because of the saucy, cheesy pizzas coming out the ovens. Grab a seat at the bar and order a $5 glass of chablis, poured from a jug. Then try the sausage, pepper, and onion pizza with house-made sausage studded with plenty of garlic and fennel seed. (111 Chelsea St., East Boston) 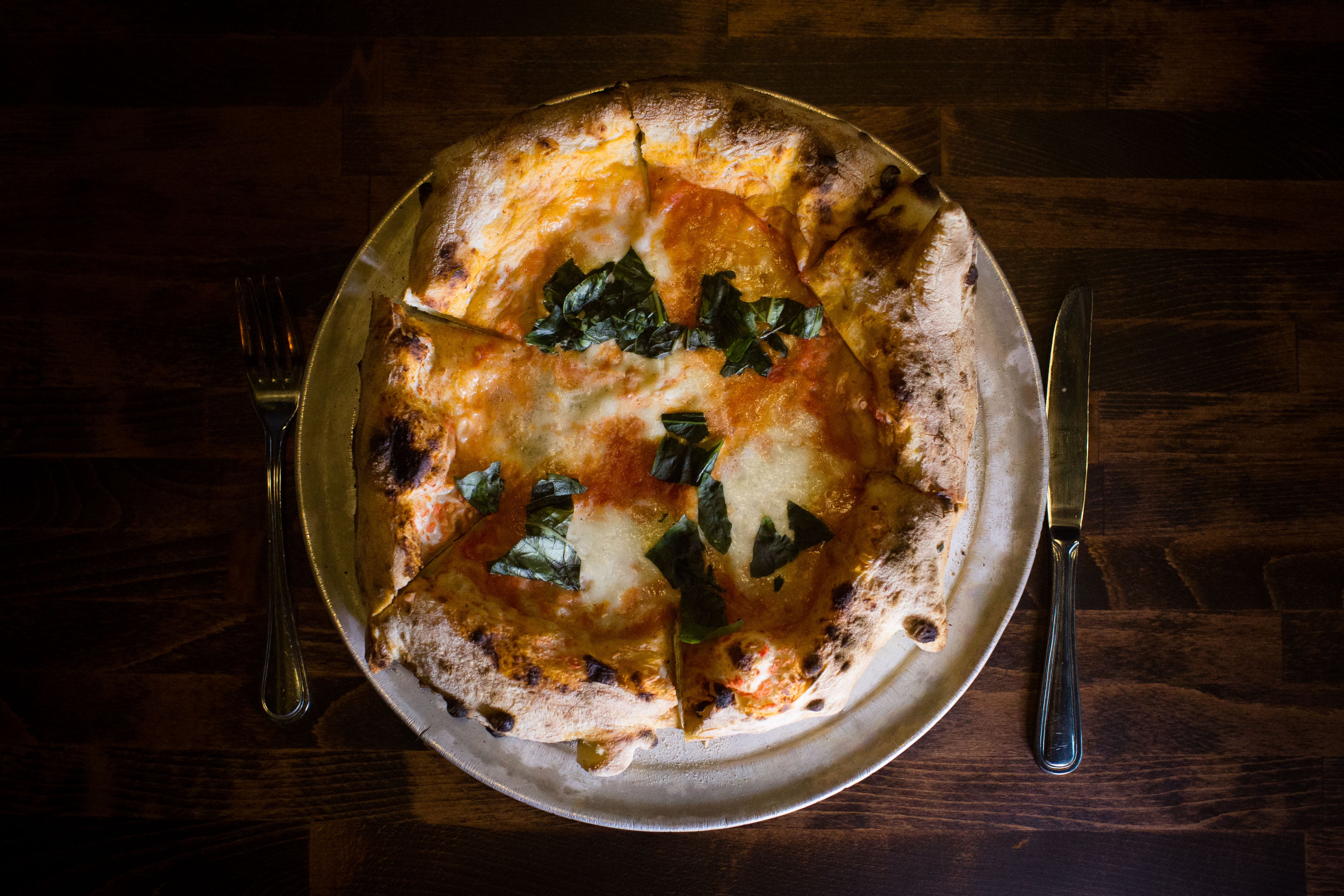 Brewer’s Fork
The dough at Brewer’s Fork in Charlestown is made every day using a 10-year-old starter of yeast, water, and flour before it rests overnight. The result is a dough high in both lactic acid and flavor. Chef John Paine said his favorite pizza is the Freebird, topped with smoked chicken, pickled collard greens, and pork cracklins. “If I ever saw it on a menu, I would never order it because it sounds too hipster,” Paine said. “But it’s my favorite, and it’s perfect.” Brewer’s Fork also offers a killer lineup of cocktails and beer on tap. (7 Moulton St., Charlestown)

Stoked
Stoked started as a food truck, then became so popular that its owners opened a brick-and-mortar restaurant in Brookline last year. Each part of a Stoked pie, from crust to sauce to toppings, is crafted in-house and sourced locally whenever possible. And while some places focus on decked-out pizza, Stoked puts the emphasis on its basic cheese pizza, which features a blend of aged mozzarella, fresh mozzarella, pecorino, and parmesan. “When we started, we decided that we wanted our cheese pizza to be the best cheese pizza,” said co-owner Scott Riebling. That said, Riebling’s favorite pizza is the honey bacon bianca, which begins with the base cheese blend and adds ricotta, local applewood smoked bacon, fresh garlic, and a drizzle of Mike’s Hot Honey infused with habaneros. “It sells out every time we have it as a special,” he said. (1632 Beacon St., Brookline)

Tapestry
This Fenway area restaurant is turning out some of the most creative pies in the city, all on a crispy, charred crust. “We top our pizzas off with everything from creamed shishito peppers with potato and smoked prosciutto to roasted mushrooms and taleggio cheese,” said Tapestry executive chef Kevin Walsh. “We’re always experimenting with fun flavor combinations guests may not expect.” On Saturdays and Sundays, the restaurant serves a brunch pizza called Everything (but the) Bagel, with arctic char gravlax, capers, and quark cheese. (69 Kilmarnock St., Boston) 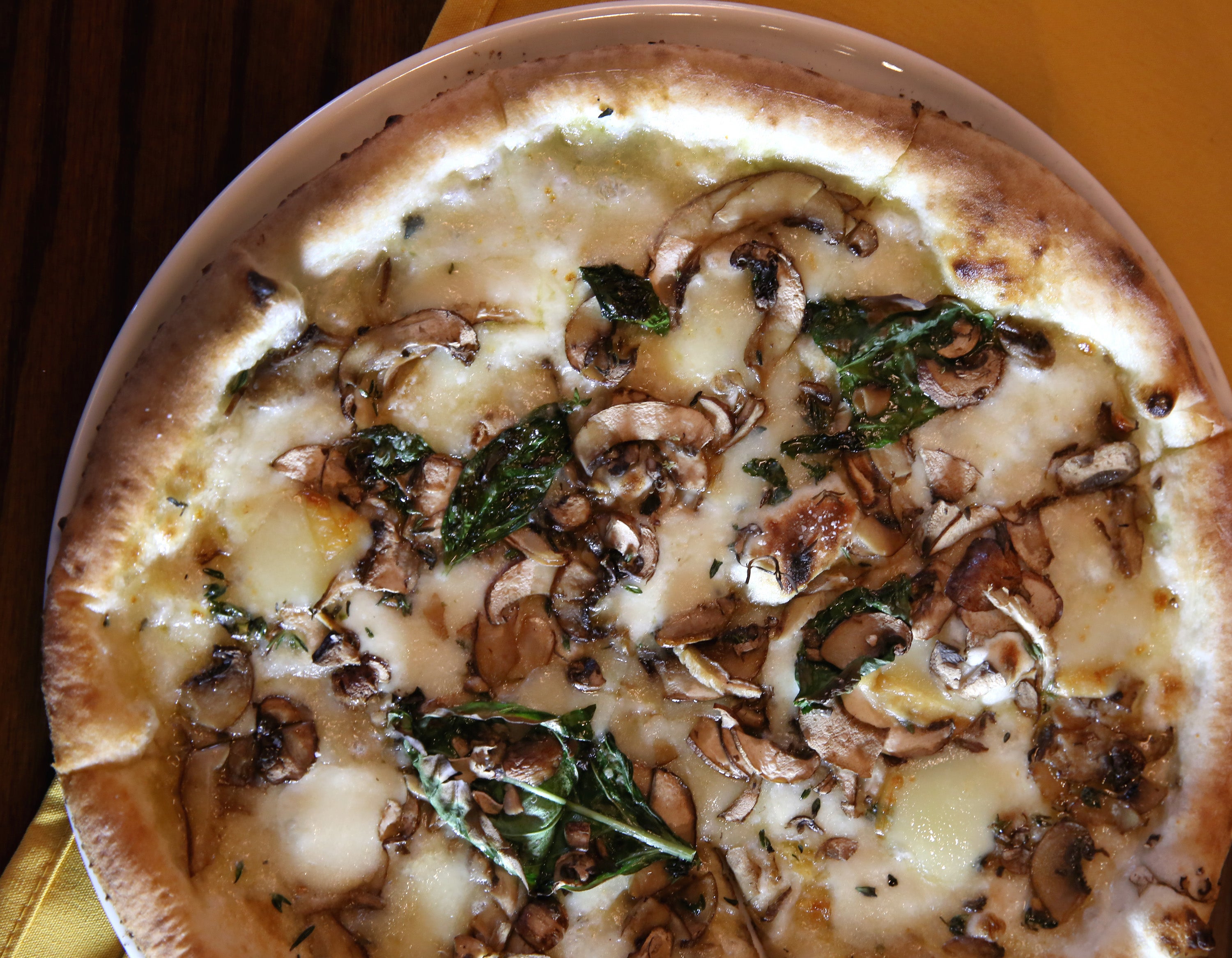 Area Four
Pies at both of Area Four’s locations hit the spot post-work and on the weekends. It all begins with the crust, said chef Jeff Pond. “We use a 14-year-old sourdough starter, which includes grains like emmer and barley, and it undergoes a 36- to 40-hour fermentation.” The vegetarian mushroom and fontina pizza then combines an earthy mushroom flavor with pecorino cheese and tangy sauce. Or go the opposite way with the carnivore pizza, which is topped with mozzarella, tomato, sopressata, sausage, and bacon. (500 Technology Square, Cambridge; 264 East Berkeley St.; Boston)

Babbo
Fans rejoiced when Mario Batali and Joe Bastianich opened a Boston outpost of their beloved New York City restaurant in 2015. Babbo in the Seaport serves Neapolitan-style pies cooked between 900 and 1,000 degrees Fahrenheit. The spot’s bestseller is the margherita with mozzarella, tomato, and basil, chef Mario Laposta said. His favorite pie is the quattro formaggio, which blends fresh and smoked mozzarella, gorgonzola, and Grana Padano cheeses on top of Babbo’s chewy, slightly charred crust. “It’s a unique blend of cheeses,” Laposta said. “It’s great because I love gorgonzola, and the smoked mozzarella is from Wolf Meadow Farm in Mass.” (11 Fan Pier Boulevard, Boston)

Crazy Dough’s Pizza
Some of the city’s most creative pies are coming out of Crazy Dough’s, a longtime member of the Boston pizza scene. Living up to the name are the potato bacon cheddar pizza, with bacon, scallions, cheddar, and sliced red bliss potatoes, and the cheeseburger bacon, a red sauce pie with mozzarella, seasoned beef, smoked bacon, and shredded cheddar. (8 Park Plaza, Boston; 2201 Commonwealth Ave., Brighton)

Locale
Locale on Hanover Street in the North End serves pizzas of homemade crust, sauce, and all of the classic toppings: homemade sausage, broccoli rabe, and mushrooms. Start your meal with one of the appetizers, such as crostini, cured meat, or burrata, then move onto a pizza like the Parma ‘Due,’ with gorgonzola, prosciutto, arugula, and figs. (352 Hanover St., Boston)

Max and Leo’s
Located in both Newton Centre and right next to the ballpark in the Fenway, Max and Leo’s is a neighborhood spot for pizza, wings, and beer. Each pizza is cooked in a 900-degree, coal-fired oven, which slightly chars the crust and gives it a pleasant chewiness. The barbecue chicken pizza—featuring smoked gouda, mozzarella, grilled chicken, barbecue sauce, and scallions on top of the homemade dough—is a must-order. (325 Washington St., Newton; 82 Lansdowne St., Boston)

Otto
There’s something to be said for a pizza place that’s consistent, and Otto—with locations in Brookline, Allston, and Harvard Square—is consistently a great option for a slice in those neighborhoods. Its pizza crust is thin, and its toppings are never piled too high, making it an ideal place for grab-and-go. (289 Harvard St., Brookline; 888 Commonwealth Ave., Brookline; 1432 Massachusetts Ave., Cambridge)

Pastoral
At Pastoral in Fort Point, Chef Todd Winer has curated an impressive list of pies that include traditional topping combinations, like prosciutto and buffalo mozzarella, and more creative options, like roasted pineapple and spicy pork sausage on the Hawaiano. (345 Congress St., Boston)

Picco
This nondescript restaurant on Tremont Street in the South End is quietly serving some of the area’s best pizza. A plain cheese pizza is a fine choice, but the toppings—including gruyere cheese and house-made ricotta and Italian sausage—are where Picco really shines. (513 Tremont St., Boston)

Posto
On the edge of Davis Square is Posto, Somerville’s dependable Italian restaurant with a delicious pizza menu. Posto’s got all of the pizza bases covered: great crust, gooey cheese, and a rich tomato sauce. There’s even a section of the menu devoted to white pizzas with creative toppings; try the risotto, a white pizza topped with mozzarella, fried basil, and lemon arancini. (187 Elm St., Somerville)

The Salty Pig
This restaurant on the border of the South End and Back Bay pays tribute to all things Italian. While it’s tempting to make a meal out of the great charcuterie and cheese selection, save some room for one of the delicious pizzas, like the namesake pie, The Salty Pig. The cheese pizza is topped with cured pork, mustard, arugula, and a caramel made with pale ale beer. (130 Dartmouth St., Boston) 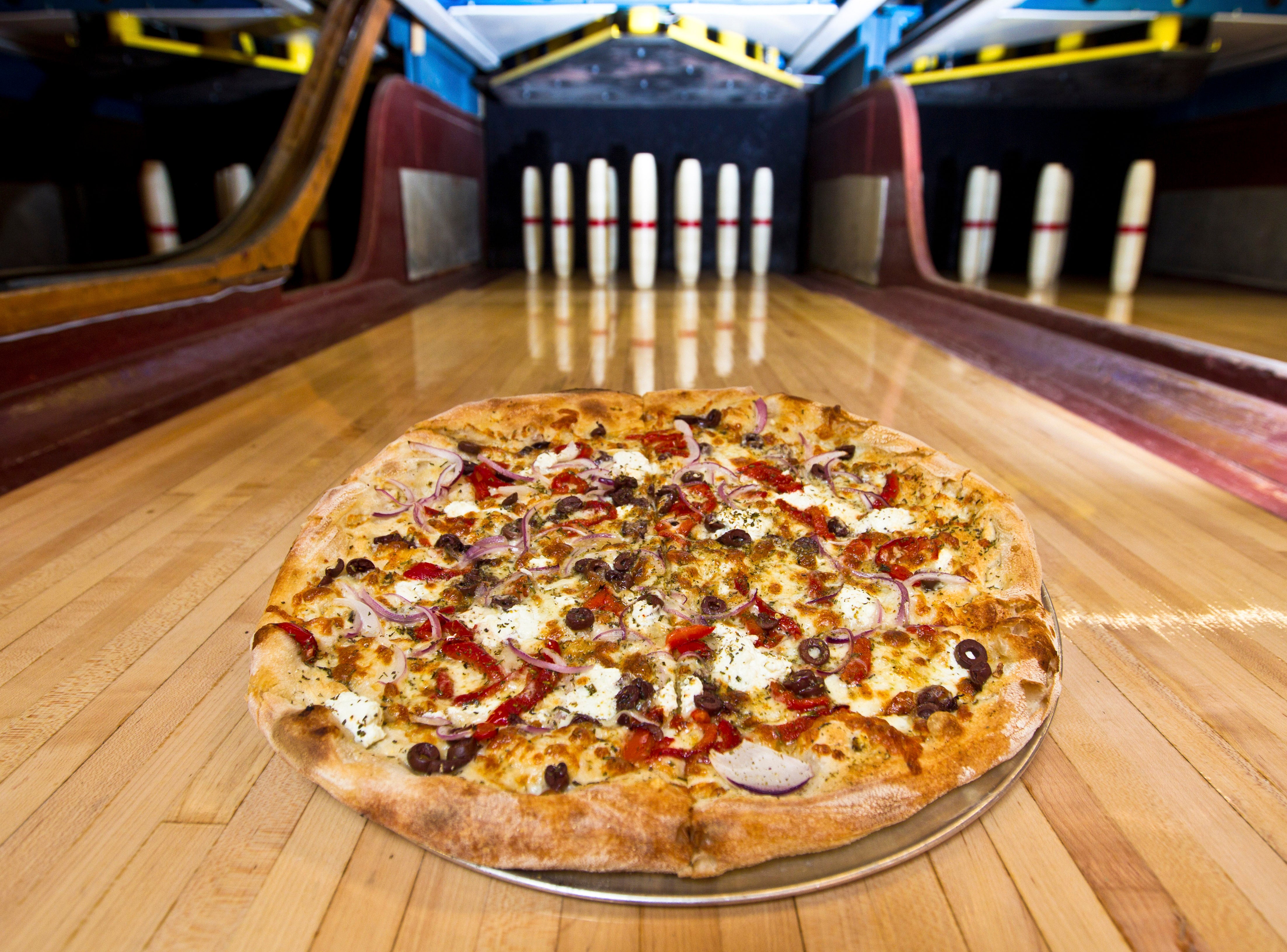 City Girl Cafe
If you blink while passing through Inman Square, you may miss City Girl Cafe, a tiny dining room reminiscent of an Italian trattoria. There’s usually a line of diners outside waiting for a table to open up so they can enjoy one of the comforting pastas or pizzas coming out of the minuscule kitchen. A standout is the Brussels sprouts and bacon pizza, a thin crust pie topped with browned sprouts, crispy bacon, garlic oil, and romano and pecorino cheeses. (204 Hampshire St., Cambridge)

Dirty Water Dough
Like the name implies, at Dirty Water Dough, the dough is a top priority. (Unlike the name implies, the dough is not dirty.) Similar to many places on this list, Dirty Water’s dough is made in-house, but it may be the only entry that brews its own IPA just to go into the dough. Pies here vary from traditional pepperoni and cheese to the Hulk pizza, with pesto and goat cheese, to the enchilada pizza, with chicken, enchilada sauce, tomatoes, romaine lettuce, and sour cream. (222 Newbury St., Boston)

Flatbread Company
It doesn’t get more New England than a game of candlepin bowling. At Flatbread Company, you can eat pizza while you play, because the bowling alley is also home to a pizzeria. The menu is all organic, and the wood-fired, thin crust pizzas can be topped with free-range pork or chicken and nitrate-free sausage. Pizzas, bowling, and a great selection of draft beer make it a top-notch date night spot. (45 Day St., Somerville)

Joseph’s Sub Shop and Pizza
Joseph’s doesn’t have fancy toppings or even a website—just your basic saucy, cheesy pizza and calzone options. It’s a regular haunt for students living in JP, as it’s one of the few pizza shops in Boston that’s open until 3 a.m. on weekends. (8 Huntington Ave., Jamaica Plain)

Korsha Wilson is a food writer, Negroni connoisseur and restaurant enthusiast. Her favorite pizza topping is either pepperoni or extra cheese. Follow her on Twitter @KorshaWilson.