What began with tinkering and testing in a Massachusetts Institute of Technology fraternity basement is now one of the world’s first robotic restaurants.

At the newly-opened Spyce in Downtown Crossing, customers place orders at one of seven touchscreen kiosks. Mechanical smart “runners” collect vegetables, produce, and grains and load them into cylindrical woks. The woks tumble alongside electric burners, allowing for even sears. Once cooking is complete, robots place the order into serving bowls ready for pickup. Then it’s lather, rinse, repeat, as the machines wash themselves before the next tasks. Every meal is ready in three minutes or less, adding up to close to 200 meals per hour.

It’s all the invention of the self-proclaimed robotics-obsessed Michael Farid, Braden Knight, Kale Rogers, and Luke Schlueter, who graduated from MIT with mechanical engineering degrees in 2016 (Farid with a master’s, the other three with undergraduate degrees).

“As college students, we didn’t have a whole lot of money to spend on $10 to $12 meals every day,” Knight said. “And as engineering students, we were like, there has to be a solution to this. So our goal became to provide a healthy, nutritious meal to people quickly at a price that was accessible to everyone.” 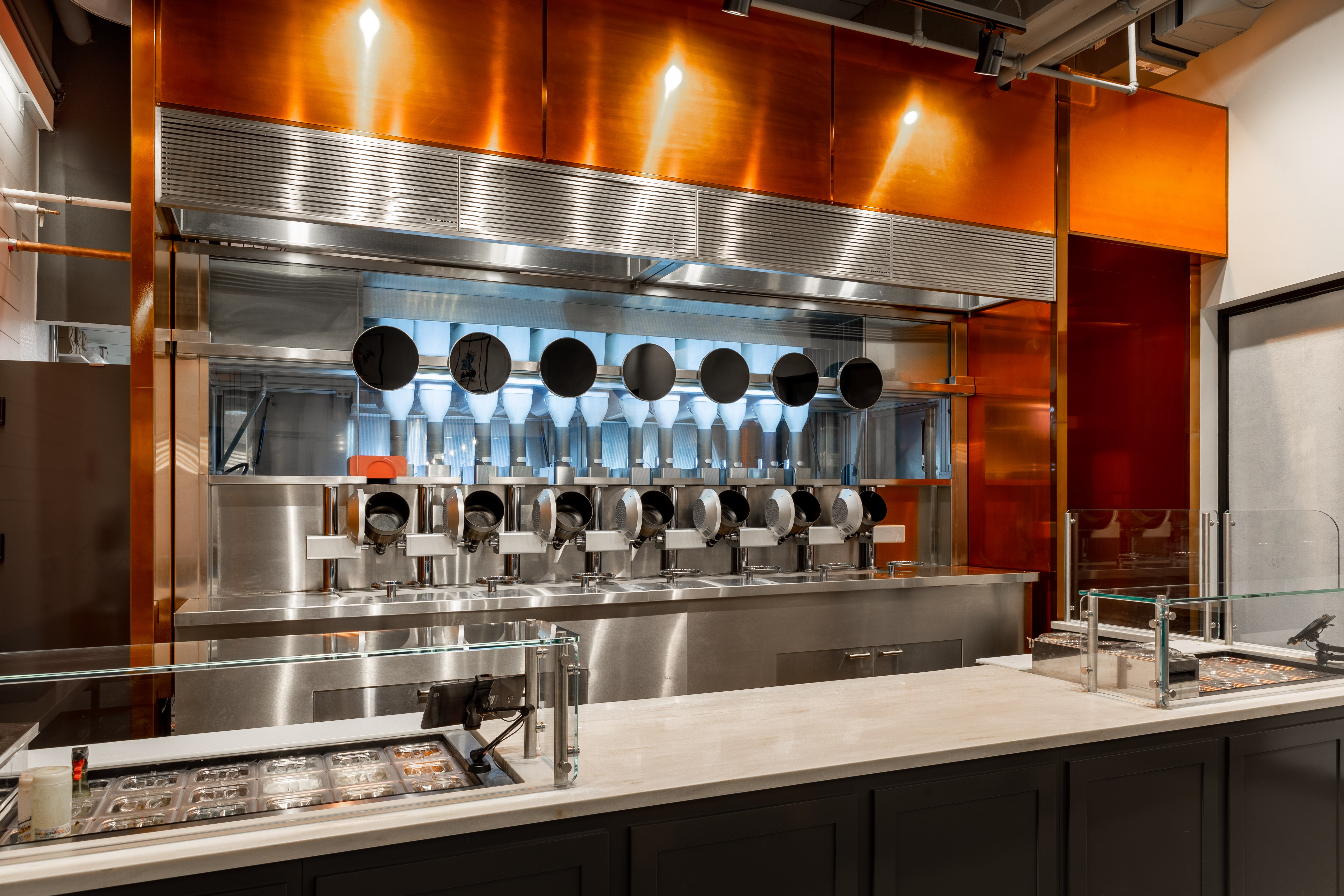 Even with ingredients like kale, Brussels sprouts, freekeh, and chickpeas, and protein add-ons like chicken, eggs, and salmon, all Spyce bowls start at $7.50, a pricing goal set by the four students from the beginning. Robotics lower labor costs, which in turn drives meal prices down, while also adding a level of precision that otherwise might be lacking in the kitchen.

And as the name suggests, the veggie-centric, bowl-based menu is all about flavors. It reaches globally to Morocco, India, Latin America, and Thailand, thanks in part to their culinary director, acclaimed French chef and restaurateur Chef Daniel Boulud of the Back Bay’s Bar Boulud — quite a surprising feather in the team’s cap.

After Farid’s email introduction to the robotics concept, the Michelin star chef was intrigued and ventured to Boston to see the technology firsthand.

“I had never heard of a robotic kitchen before, let alone seen one,” Boulud, who is also an investor in Spyce, wrote in an email. “I was impressed with the technology and was convinced that the robotic kitchen could provide the chef and cooks preparing the warm and tasty bowls with a new kind of precision and support.”

There are other humans at the restaurant, too. Garde managers (aka cold plate chefs) add garnishes to dishes before handing them off to customers. Humans are at the front of the house as dedicated guides, hosting customer interaction with the robots and inquiring about dietary restrictions. Spyce also runs a trained chef-led commissary kitchen in Malden, where the food is prepped for the restaurant’s menu items.

“The point is not to take away jobs,” Rogers said. “[People are] there to elevate the whole experience.”

“We hope that people come for the novelty, but stay for the fact that the food is really good and the value we’re creating,” Knight said.