Rachel Miller hopes to open a noodle bar in Lynn.

The chef has cultivated a solid fan base through Nightshade Pop Up, the Vietnamese- and Viet-Cajun-influenced roving dinner party she founded in April 2017, so a brick-and-mortar seems like the perfect next step. She just wants you to own part of it.

On Wednesday, Miller launched an investment page for Nightshade Noodle Bar on MainVest, a Massachusetts-based company that went live last week and that is designed to help communities invest in small businesses. Not to be confused with Kickstarter, GoFundMe, or other crowdfunding campaigns, MainVest is not about donating. Instead, your money comes back to you, and then some.

Miller’s investment goal is to raise at least $75,000 for her restaurant by Dec. 24. Anyone who invests in Nightshade Noodle Bar will own a part of the business.

“We’ll use 3 percent of our top-line revenue to pay back investors quarterly until they get one and a half times their initial investment,” she said, explaining that it will likely take two to three years to pay everyone back.

“Anyone can invest,” she said. “You don’t have to be wealthy or meet a certain criteria. … [It’s ideal] if you want to see something happen in your neighborhood.”

If all goes well — meaning, if her goal is met and a space is secured (“We’re still [deciding] between a couple leases,” she said) — Nightshade Noodle Bar is scheduled to open in downtown Lynn in late spring or early summer of 2019. At the 25- to 30-seat restaurant, noodles dishes will take up half the menu, while the other half will be made up of the pop-up’s creative small plates and Viet-Cajun crawfish. A sample dinner menu includes items like lemongrass beef rib, bun cha, and stir-fried mussels, while an all-natural wine list, beer, and seasonal cocktails are also part of the business plan. Miller intends to offer takeout, too. “I want to be a neighborhood spot; I want to be comfortable,” Miller said. “We’ve done 95 percent of our pop-ups in Lynn. … We’ve been able to build our clientele, and I want to see something come to light [here].”

A fan base isn’t the only reason why Miller set her eyes on Lynn for Nightshade Noodle Bar. She said she’s seen the area grow rapidly, welcoming young people and couples with disposable income. A community garden next to where she lives is being transformed into a condo. The growing neighborhood, she said, needs to be fed.

“Rent is much cheaper in Lynn [than in Boston],” Miller said. “And liquor licenses here are leased by the year; you can lease one for $4,000 a year including fees.”

In comparison, a one-time fee for a liquor license in Boston can cost $400,000 or more.

As of this article’s publication, $2,300 has been invested in Nightshade Noodle Bar, with 55 days remaining until the end of the campaign. In the event that her goal isn’t reached, Miller has a backup plan.

“I’m self-employed. I’ll probably continue to cook for my private clients and do the pop-up,” she said. “As far as the restaurant, we’d be looking for alternative investments.”

In the meantime, she’ll continue to host pop-ups in the Boston area through the rest of the year. On Nov. 5, Nightshade Pop Up will host a dinner at Momi Nonmi in Cambridge, this time with a secret menu. Another pop-up, on Nov. 19 at Loyal Nine in Cambridge, will focus on noodles — a test run for Miller’s potential future restaurant.

If all goes well with her investment campaign, it might be one of the last times you can catch Miller in someone else’s kitchen. 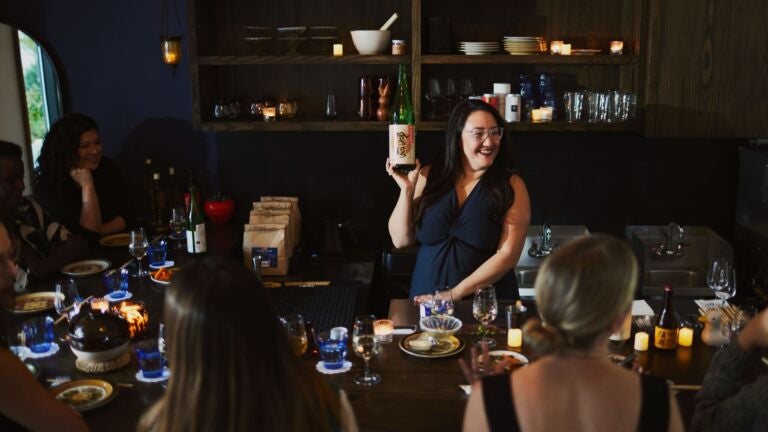