Call it a homecoming of sorts. On Monday night, against a backdrop of screaming fans at the South Bay Shopping Center, Mark, Donnie, and Paul Wahlberg celebrated the Dorchester arrival of their burger chain, Wahlburgers, which will open to the public on Thursday at 11 a.m.

The Dorchester branch is the 30th location of the chain, which was founded in 2011 and has outposts throughout North America (there are also plans to expand the restaurant to England in the spring). Mark, Donnie, and Paul — who is the executive chef of Wahlburgers — are also the subject of “Wahlburgers,” an A&E reality show that details the rise of their bourgeoning burger empire.

Besides the gourmet burgers and sandwiches that the restaurant is known for, the Dorchester Wahlburgers will feature a full bar that includes the Wahlbrewski, a custom pale ale from Harpoon Brewery. 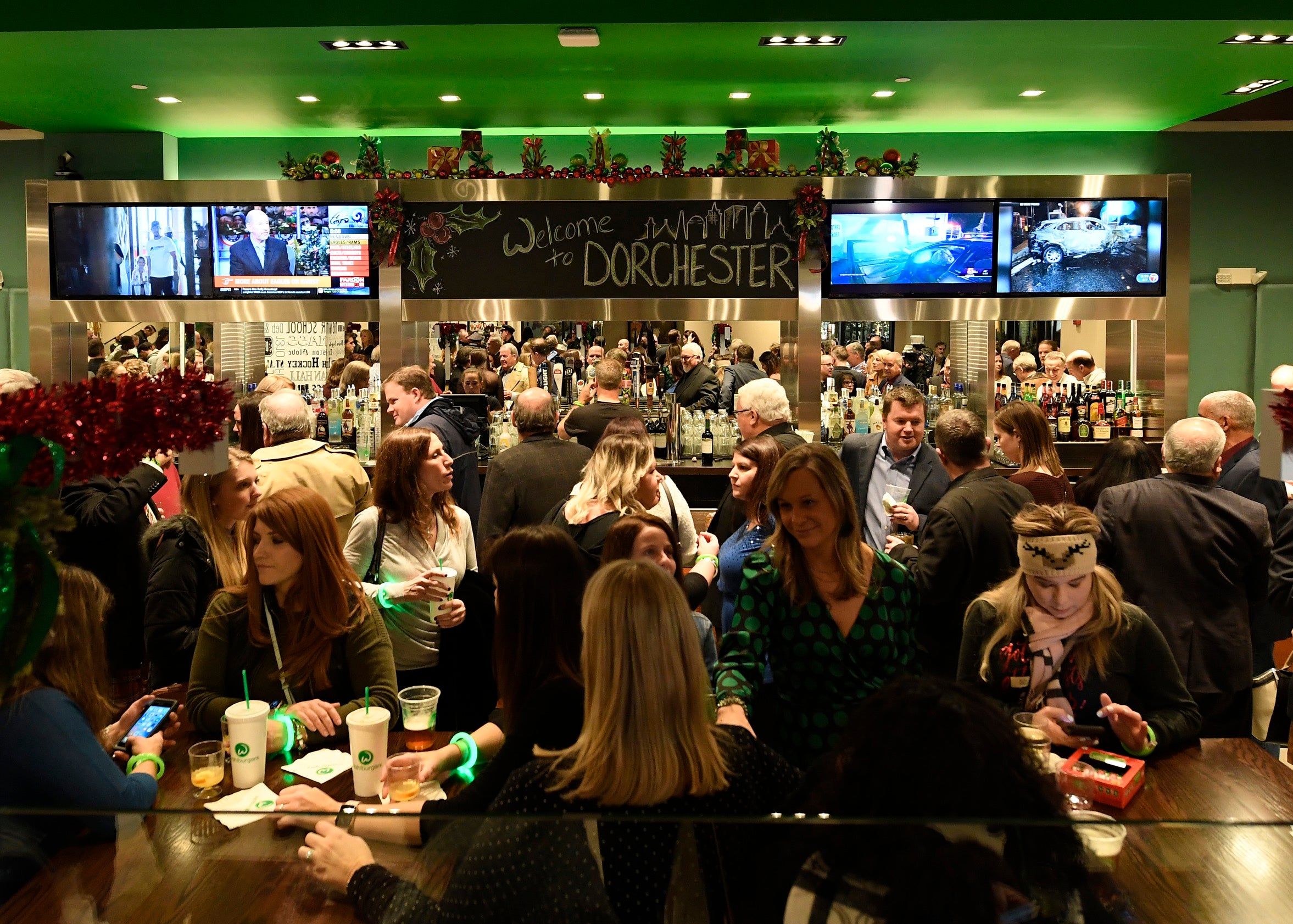 A sign at the new location reads “Welcome to Dorchester.”

At Monday’s celebration, Alma Wahlberg, the matriarch of the Wahlberg family, was in attendance  — fitting, because Paul has created dishes in her honor, like Mom’s Sloppy Joe and Alma’s Macaroni Salad.

“It’s great to have such an extensive menu, such a large selection,” Mark told Boston.com. “I think there’s something for everybody. But to be able to share our family’s experience with our family and members of our community in the neighborhood, it’s really special. We’re very excited.”

The actor is currently in town filming “Wonderland,” in which he plays Spenser, the Boston detective from Robert B. Parker’s series of novels, the 1980s ABC show “Spenser: For Hire,” and several TV movies.

“It’s bittersweet. I’ve been shooting here so I’m working every day; I don’t get to see anybody or anything,” he said. “But we always wanted to be right here. [The Dorchester location] is walking distance from our house, so it’s pretty cool.” 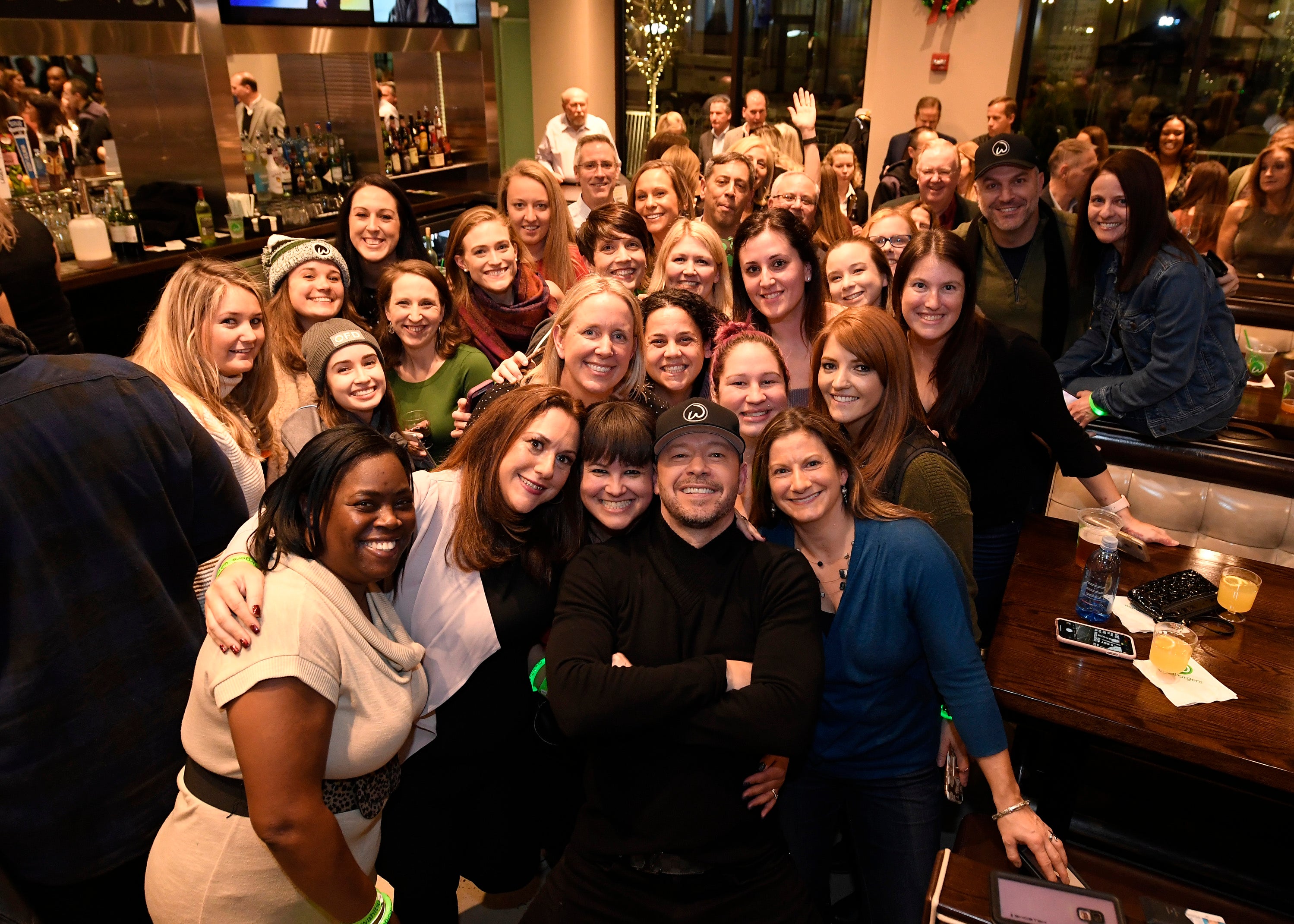 Donnie Wahlberg hangs out with friends and family inside the Dorchester restaurant.

Fans who attended the outdoor celebration were able to enjoy burgers and fries from the Wahlburgers Food Truck and could purchase commemorative Wahlgear apparel, with proceeds from both going toward the Martin Richard Foundation. Unwrapped toys were collected outside of the restaurant for the Boys & Girls Clubs of Dorchester.

On the way to the opening, Donnie shared a message on Twitter that referenced this past weekend’s “Saturday Night Live” sketch featuring a “Fighter”-esque boxer played by Matt Damon. In his video, Donnie joked that the restaurant is located at “343 Donnie Wahlberg Way,” the address mentioned by “SNL” cast member Heidi Gardner in the sketch. (The real Dorchester Wahlburgers address is 9 District Ave.)

For the Wahlbergs, a local family that has expanded to both Hollywood and the national restaurant industry, dinner still symbolizes a time to bond. When asked whether family dinners were important growing up, Mark laughed.

“We got kicked out of the house until dinner time,” he said. “But then we all came together.”