There are few better ways to spend a weekend afternoon than by drinking beer under blue skies. Boston’s beer (and, starting this year, wine) gardens allow us to live out that summer indulgence. Whether you’re an IPA drinker or a rosé fan, visit these outdoor drinking gardens for sunny sipping.

This list will be updated as more beer and wine gardens open in 2019.

Aeronaut Allston
Back for its fourth year, Aeronaut Brewing has set up its seasonal beer garden three nights a week with live music, food trucks, and plenty of beer. The family-friendly pop-up is held at 267 Western Ave., with musical acts that include Los Goutos and Kotoko Brass, food from Roxy’s Grilled Cheese and Rhythm ‘n Wraps, and guest ciders in addition to Aeronaut’s own suds from its Somerville brewery. (Open May 15–Sept. 13; Wednesdays from 5 p.m.–9:30 p.m., Thursdays from 5 p.m.–10:30 p.m., and Fridays from 5 p.m.–11 p.m.)

Castle Island at Constitution Wharf
Norwood-based brewery Castle Island Brewing has revived its Charlestown beer garden for a second season, pouring classics and limited release beers from a 20-tap draft trailer next to the USS Constitution. Against the backdrop of the Boston skyline, guests can sip on the brewery’s flagship Keeper IPA, Tango Crush sour, award-winning American Lager, and other options, along with wine and non-alcoholic drinks. Bring your pup — the beer garden is dog-friendly. (Open May 30–Sept. 29; Thursdays and Fridays from 3 p.m.–9 p.m., Saturdays from noon–9 p.m., Sundays from noon–7 p.m.)

Cisco Brewers
Back for a second year, Nantucket-based brewery Cisco Brewers popped up in the Seaport next to District Hall, serving sudsy hits from both its original island location and Portsmouth offshoot. Enjoy beers like the Getaway IPA, Crantucket Brut IPA, Whales Tale, Grey Lady, and more, along with wine, small-batch ciders, and wine-based cocktails. A handful of food truck options are available as well, including seafood and tacos from Loco Taqueria & Oyster Bar. (Open May 15–TBD; Tuesdays through Fridays from 4 p.m.–11 p.m., Saturdays and Sundays from 12 p.m.–11 p.m.) 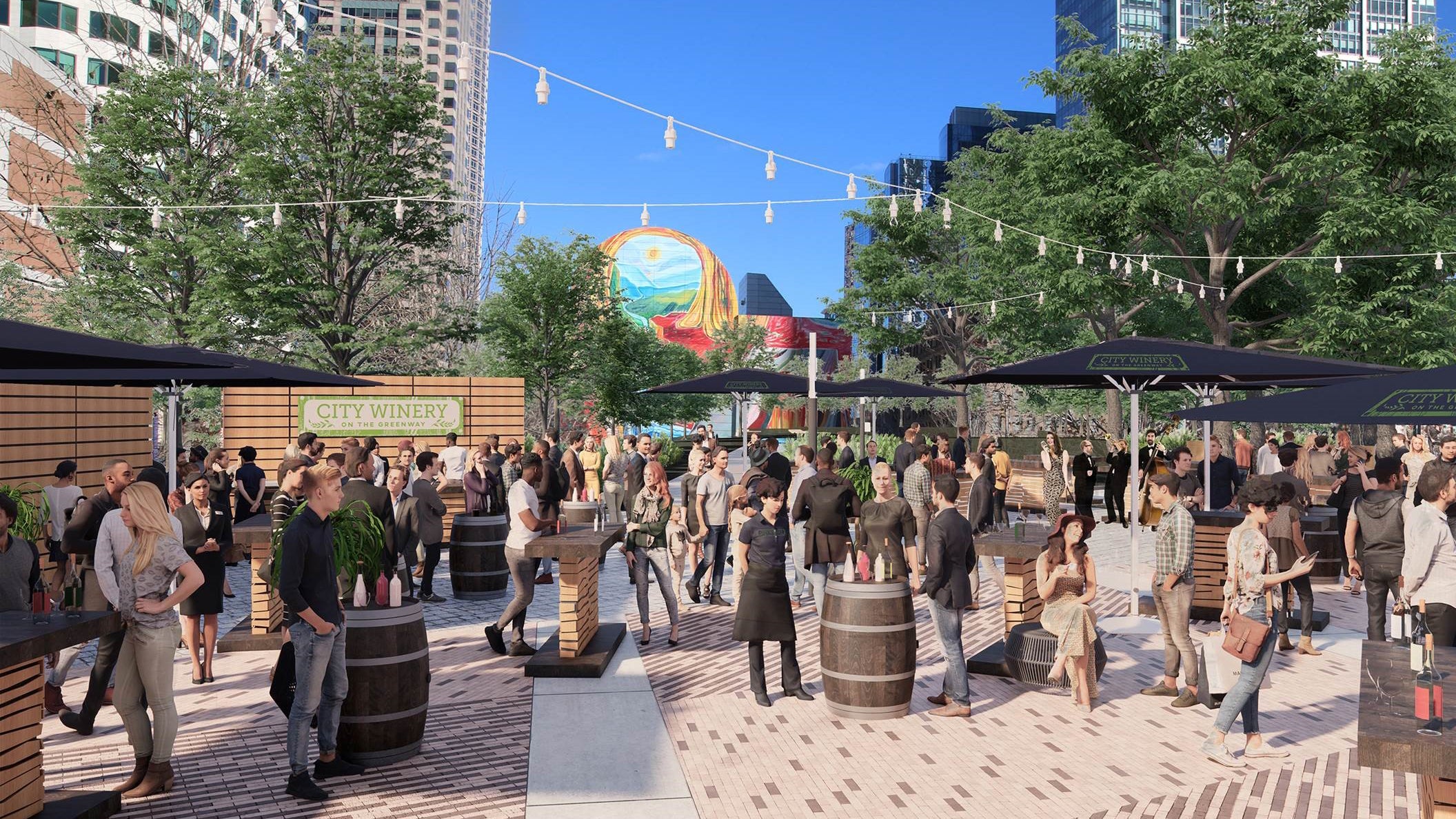 A rendering of City Winery on the Greenway, set to open in May 2019.

City Winery on the Greenway
It’s a first for Boston: a dedicated, open-air wine garden, courtesy of the West End’s City Winery. Wine devotees can sip on reds, whites, and rosés on tap in Dewey Square, located just across the street from South Station. Pair your wine with Mediterranean-inspired snacks (cheese, charcuterie, olives, and more), and soak in the sun while swirling a glass. Beer and cider from Harpoon are available as well. (May 1–Oct. 30; Wednesdays and Fridays from 3:30 p.m.–10 p.m., Saturdays from 1 p.m.–9 p.m., and Sundays from 11 a.m.–7 p.m.) The Patios at City Hall Plaza. 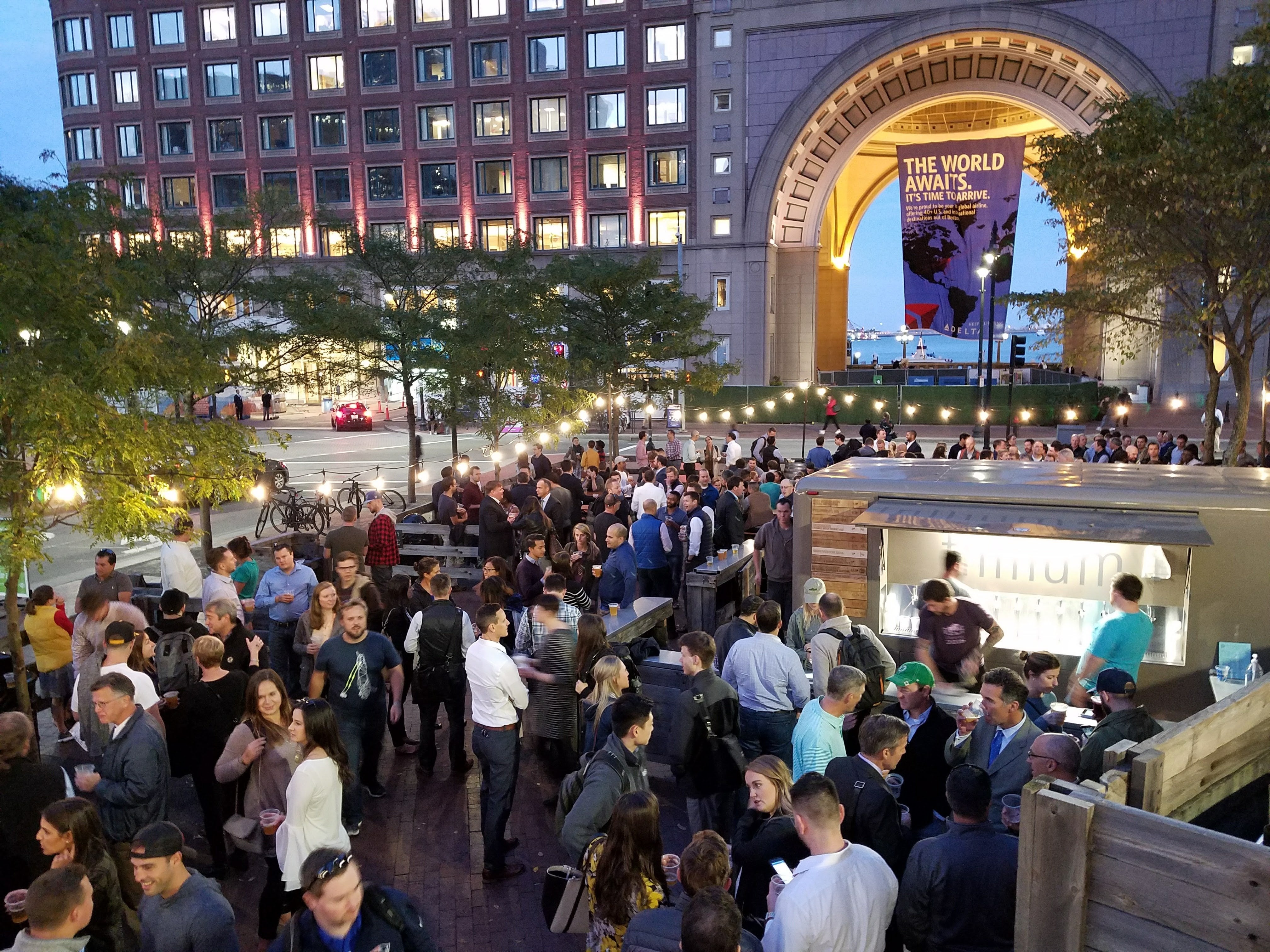 Trillium Brewing Garden on the Greenway.

Trillium on the Greenway
Trillium’s brand-new beer garden and taproom in the Fenway isn’t scheduled to open until this fall. In the meantime, those thirsty for the brewery’s coveted New England IPAs — plus new lagers and a rotating lineup of Fresh Press ales — can head to Trillium on the Greenway, which returned for a third year at the corner of High Street and Atlantic Avenue. Wine from Westport Rivers Vineyard & Winery are also available, and drinkers can bring in their own food from nearby food trucks or restaurants. (Open May 16–October TBD, dependent on the weather; Wednesdays–Fridays from 2 p.m.–10 p.m., Saturdays from 11 a.m.–10 p.m., and Sundays from 12 p.m.–6 p.m.)