It’s an important year for the negroni: The cocktail — traditionally made with equal parts gin, sweet vermouth, and Campari — turned 100 years old. As legend has it, the drink was invented at Caffe Casoni in Florence, Italy, in 1919; since then, it has become a stalwart at Italian restaurants and bars that offer a strong classic cocktail menu.

If that isn’t reason enough to celebrate with a glass of the good stuff, this week marks the sixth anniversary of Negroni Week, a global campaign run by Imbibe magazine and Campari that aims to highlight the drink while raising money for charitable causes. From June 24-30, over 40 bars in the Boston area will offer their takes on the negroni — whether it’s a straightforward rendition or a wildly inventive variation — and will pledge a donation to their charity of choice.

Despite its popularity, Campari, a bitter liqueur, can be a polarizing cocktail component. For those who want something a little outside the box, or are looking for an easy gateway to the drink, these five negronis are standing out among their Negroni Week cohorts. 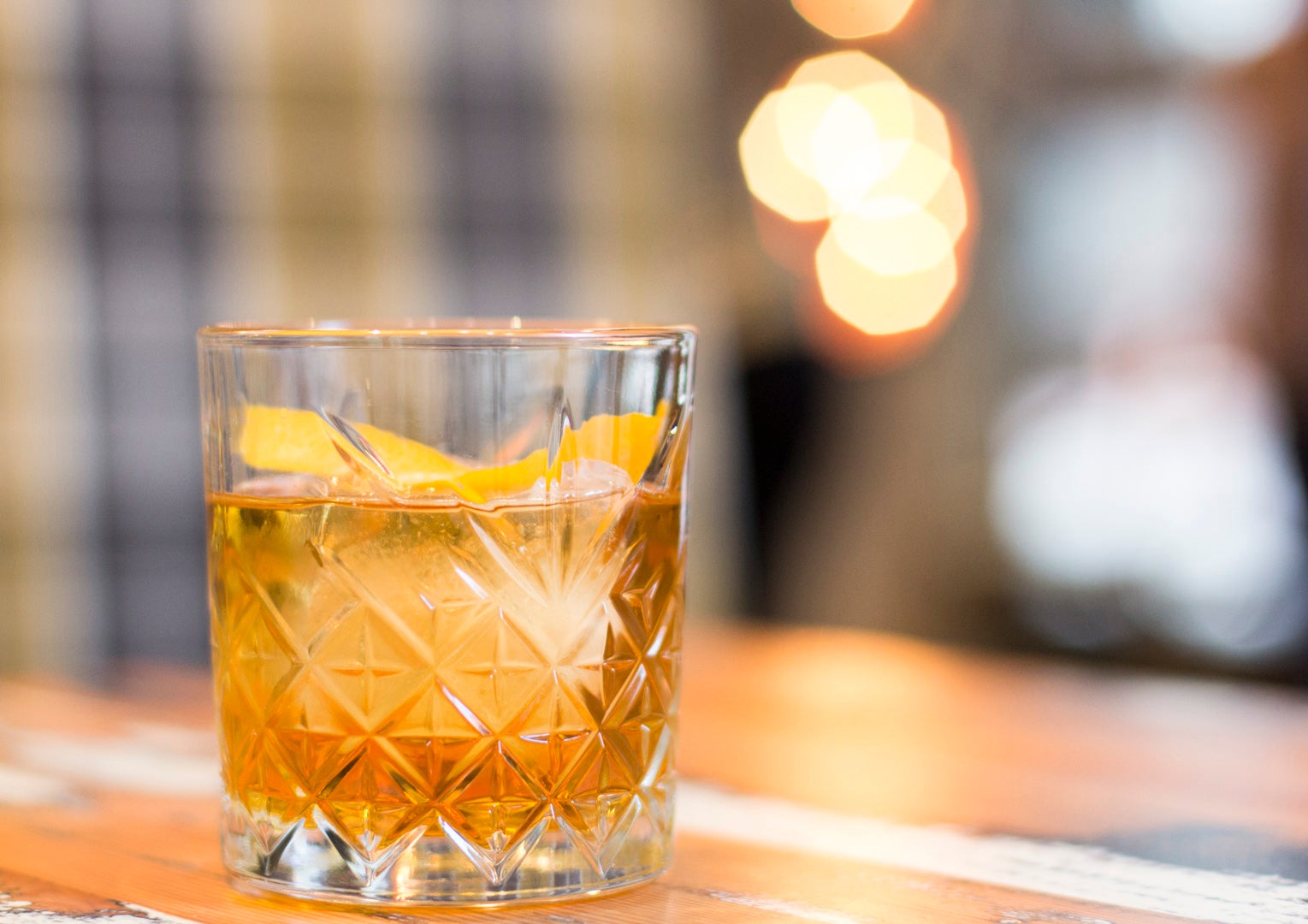 Teodora Bakardzhieva, co-owner of the newly opened Bar Mercato in downtown Boston, said she grew up with Campari and vermouth.

“I knew what Campari was when I when 5,” she said. “It’s kind of a shame we don’t hear about it here [as much] and we’re still catching up with what it is.”

Bakardzhieva, who grew up in Bulgaria, has crafted three different negronis for Negroni Week, but arguably the most unique option doesn’t even include Campari: The Negroni Ambrato is made with Earl Gray-infused Bombay Gin, Luxardo Bianco, and Carpano Bianco. While the Luxardo Bianco liqueur helps add a Campari-esque bitter note to the drink, the Carpano Bianco — a sweetly perfumed vermouth — gives the negroni a floral feel.

As for the bar’s charity of choice, Bakardzhieva said Bar Mercato is supporting the Wild Foundation, which is dedicated to protecting the planet’s wildlife and resources.

“I’m a big supporter of nature, and I think that nature is a huge part of our lives,” Bakardzhieva said. “We’re city people and sometimes we forget where we come from.” 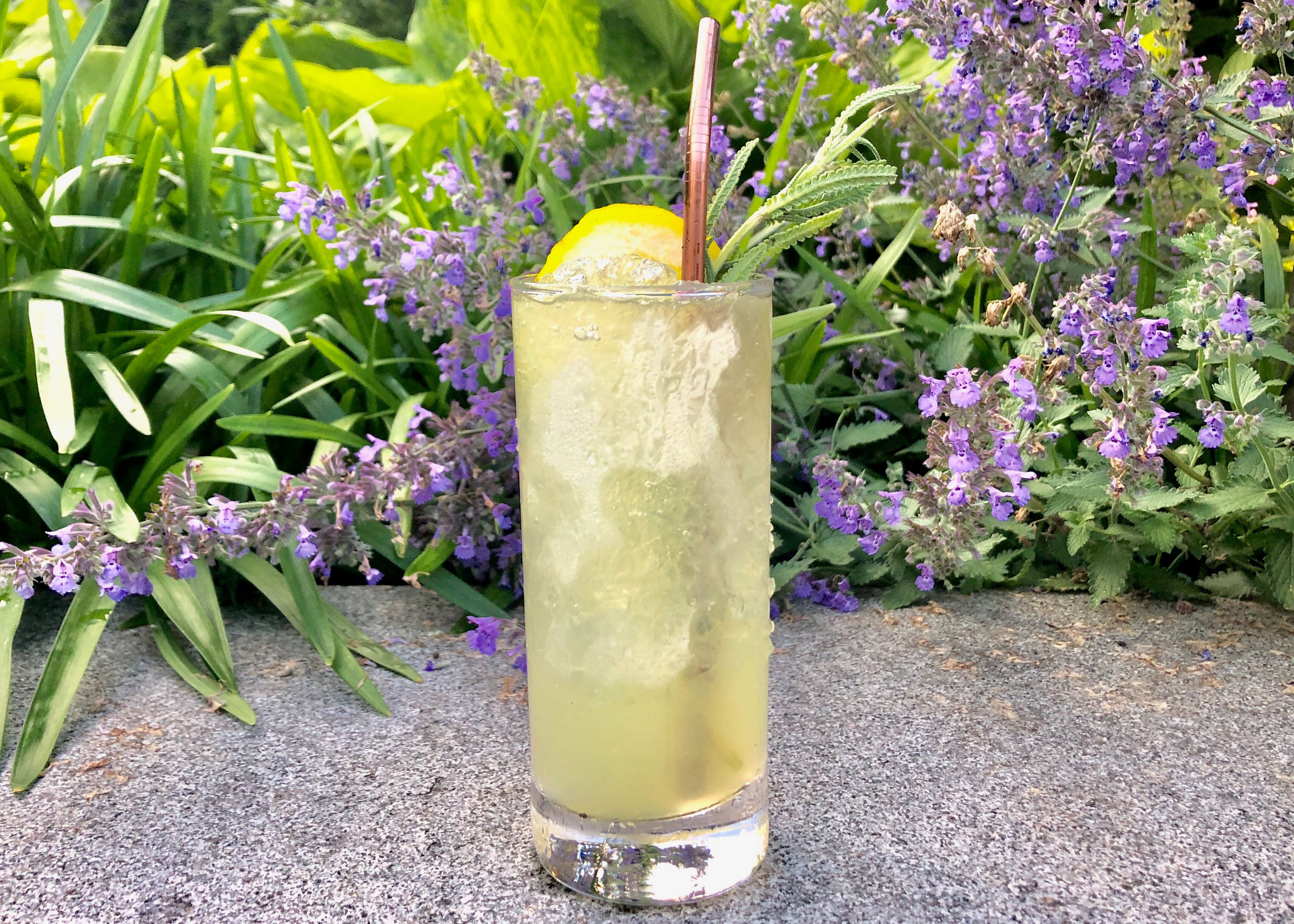 Colette, a wine bar and restaurant that opened in Porter Square in February, found inspiration in the garden for its unique take on the negroni. Christopher Keith, Colette’s beverage director, said that he chose to use the herbaceous, citrusy Aloo Gin from Seattle to infuse with lavender. The gin is then mixed with Salers Aperitif, fresh lemon, and Dolin Vermouth de Chambery, and topped off with Fever Tree soda water. Similar to a white negroni, Colette’s version is a refreshing option to drink out on the bistro’s sun-drenched patio.

For Negroni Week, the Cambridge bistro is supporting the Restaurant Workers’ Community Foundation, a nonprofit that advocates for and supports restaurant workers in a number of areas, including mental health and substance abuse, wage fairness, gender equity, and racial justice.

“I’ve been in hospitality since I was 14,” Keith wrote in an email to Boston.com. “I wouldn’t change it for a thing, but unfortunately a lot of people get taken advantage of in this industry. This foundation hits home the most for me for what they are doing to bring justice to people who are working grueling 12-plus hour shifts to put food on the table.” 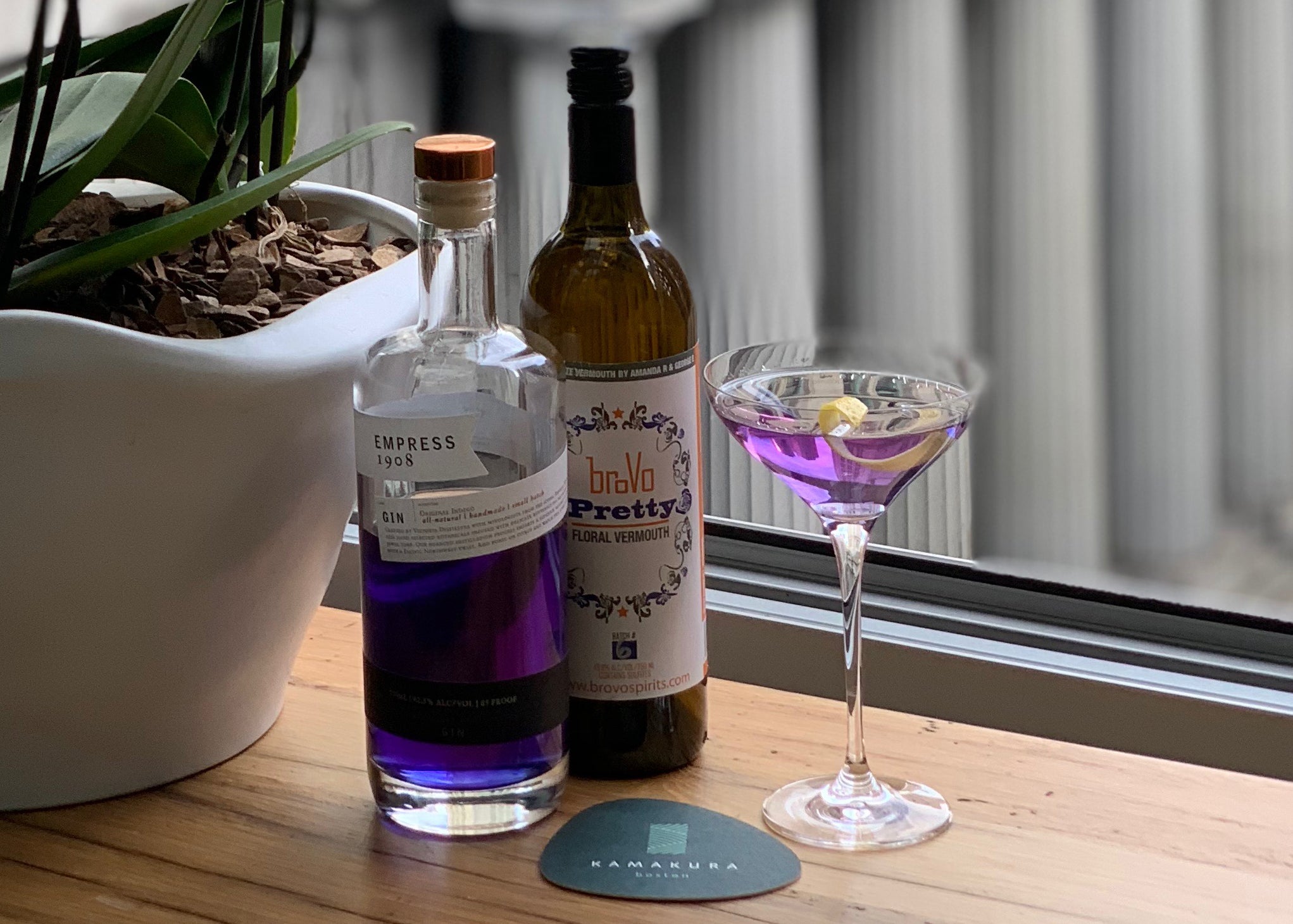 The Unique at Kamakura.

The Unique at Kamakura

You may have already seen Kamakura’s The Unique on the Japanese restaurant’s cocktail menu, just under a different name: Murasaki, which means “purple” in Japanese. Given a new moniker this week, The Unique is one of three negronis being shaken up for Negroni Week, and by far the most non-traditional of the bunch.

The drink uses Empress 1908 gin, which is infused with butterfly pea blossom to give it a violet hue, and BroVo Witty dry vermouth — but after that, the cocktail swerves from the traditional gin-vermouth-Campari path. Instead of Campari, The Unique features Bushido Ginjo Genshu sake, which offers fruit and floral notes.

Beverage director Michael Puopolo encouraged visitors to enjoy the drink at one of two bars at the downtown hot spot: the recently-opened rooftop bar, called Kumo Sky Bar, or at the second floor bar. Kamakura is donating to the James Beard Foundation, which celebrates the culinary world through scholarships, industry programs, advocacy training, and more. It’s a cause that Puopolo said is close to his heart.

“Hospitality support is huge,” he said. “It’s been my life’s work, working in this industry.” 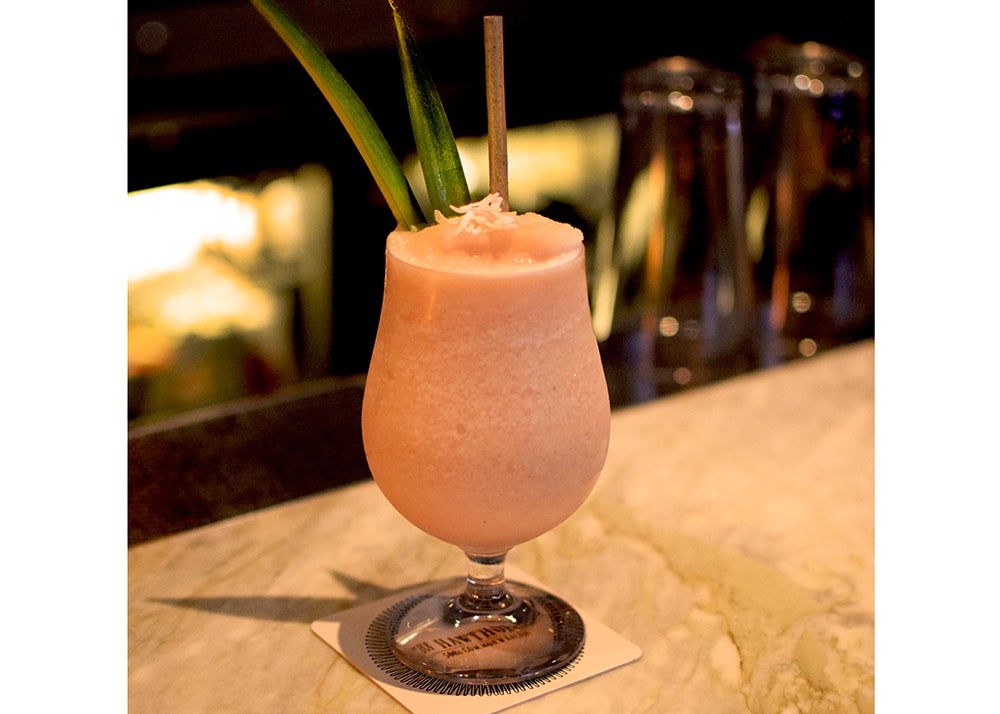 Negroni colada at The Hawthorne.

Negroni colada at The Hawthorne

If you like piña coladas — and also negronis — the negroni colada at The Hawthorne in Kenmore Square is an admiral mashup.

The tropical take uses the negroni’s traditional gin, Campari, and vermouth components, while also incorporating a healthy dose of pineapple juice and coconut cream. It’s just one of the bar’s six negroni cocktails offered this week, but arguably the most refreshing as the temps creep up toward the 80s.

Jared Sadoian, bar manager at The Hawthorne, is a huge fan of the Italian drink.

“It’s probably one of the few cocktails that I drink for recreational purposes,” he said, adding, “[At The Hawthorne], we tend to lean towards the classics, but we’re not afraid of going off the beaten path a little bit, which is what the negroni colada is all about.”

The cocktail bar has a tendency to partner with charities that support families or kids in need, so it was only natural that its Negroni Week charity of choice is Children of Restaurant Employees (CORE), which grants aid to children of food and beverage industry professionals who are facing life-altering challenges.

“It’s tough as a bar that deals in adult-oriented beverages to align yourself with something that’s kid oriented,” Sadoian said. “But when we found out about CORE a few years ago, it was a pretty natural sort of fit.” 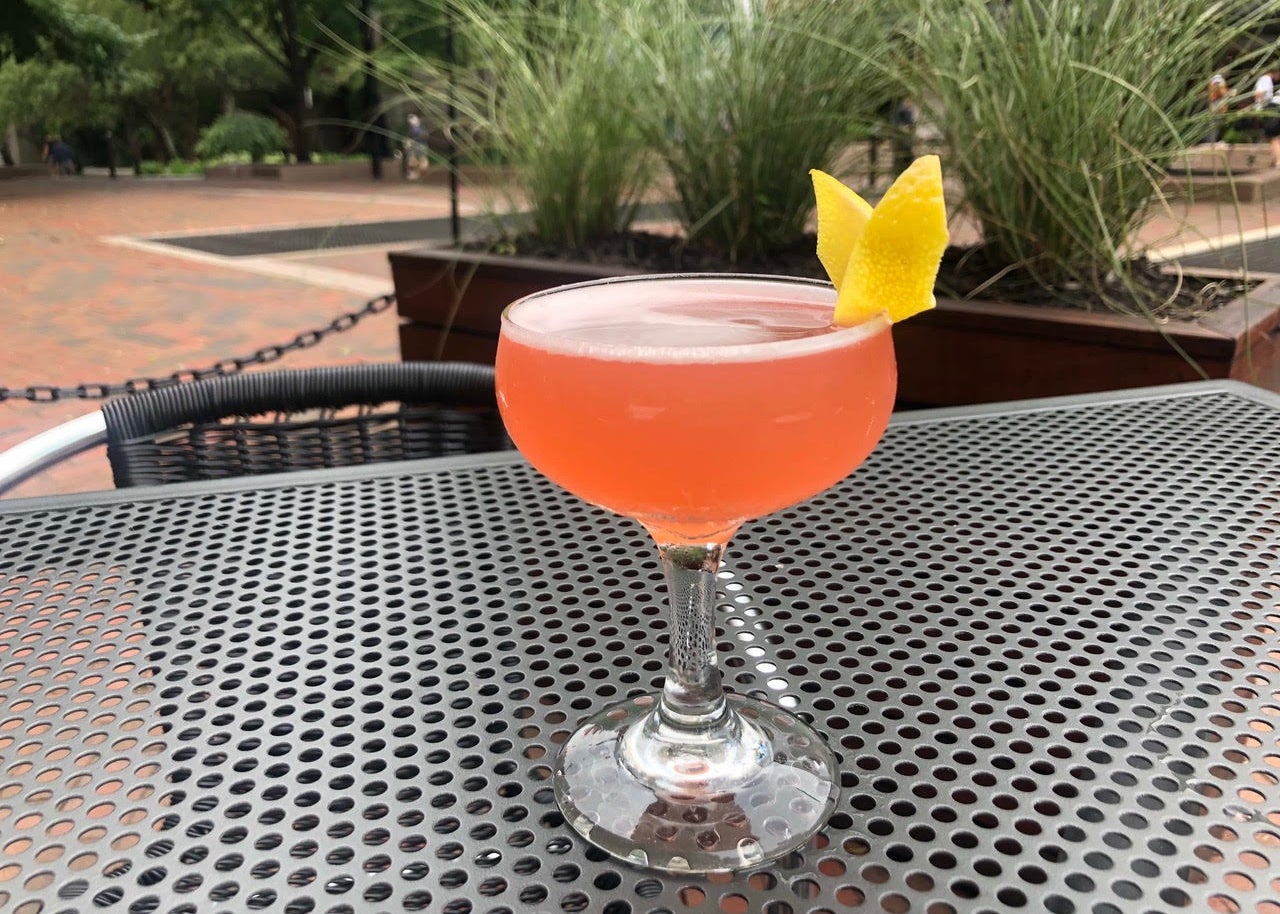 The Bittersweet Aloha at The Salty Pig.

Bittersweet Aloha at The Salty Pig

Another tropical take on the negroni can be found at The Salty Pig, a pork-centric restaurant on the border of the Back Bay and the South End.

“Negronis are a big seller here,” said general manager Angela Lamb. “We wanted to come up with a fun twist on it.”

The Bittersweet Aloha, which is also available on the everyday cocktail menu, is made with gin, Campari, and Cocchi Americano, an aperitif wine. It then gets the tiki treatment with roasted pineapple syrup, lime, and a pinch of salt.

Purchase the Bitterwsweet Aloha and you’ll be supporting No Kid Hungry, an organization that works to end childhood hunger in America.

“We as a company have worked with them extensively,” Lamb said. “We always devote some of our time and food, and I just love the idea of being able to donate to them in a monetary way.”

To check out the full list of participating bars and restaurants during Negroni Week, head to the event’s website. 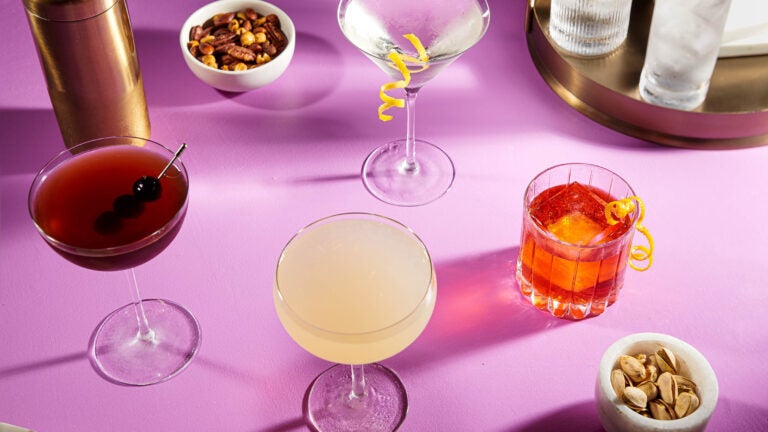