Residents of the South End have seen this corner of Tremont Street and Union Park cycle through a number of restaurants over the past couple of decades. From 1995 to 2008, there was Garden of Eden, a family-owned eatery that focused on quintessential New England fare. Then it became Stephi’s on Tremont, the staple from Sidell Hospitality that closed in April after 11 years.

Now the corner’s newest resident, American brasserie Black Lamb, is asking: Won’t you be my neighbor?

Debuting Tuesday night, Black Lamb is meant to be a love letter to the South End. For Ben Kaplan, the restaurant’s managing partner and the former director of operations at the Barbara Lynch Group, the name is a nod to the “come one, come all” ethos that its team — chef/partner Colin Lynch, partner Heather Lynch, beverage director Ryan Lotz, and partner Jefferson Macklin (all behind South End stunners Bar Mezzana, No Relation, and Shore Leave) — are hoping to encourage.

“Lambs are fun and a little awkward; they fall over sometimes,” Kaplan told Boston.com, laughing. “The idea is that the space is an inclusive place — anybody and everybody can enjoy themselves here. [The South End] has always been a place for outsiders and others to feel included.”

To that end, the cozy restaurant, designed by Hacin + Associates, offers a number of drinking and dining experiences, all defined by wood accents and a sleek, dark green and light gray color palette. An eight-seat lounge area by the entrance serves as a spot where diners can sip on a martini before dinner or share appetizers while looking out onto the outdoor patio, which is set to open in August. At the 14-seat bar — or the nearby drink rail — neighbors can chat over cocktails, beer, and wine while watching the game on a couple of TVs suspended above. A compact, 46-seat dining room operates as the hub of the restaurant, complete with a high-top table area for more casual gatherings, while the back room that previously served as Stephi’s private dining room was converted into a light-filled raw bar, where diners can throw back Island Creek oysters and Lynch’s hybrid lobster roll: a cold roll with just a hint of mayonnaise — “I don’t like a lot of mayo,” he said — and topped with brown butter, salt, chives, and an in-house seasoning mix. Throughout the space, muralist Massimo Mongiardo drew whimsical black-and-white sketches of lambs going fishing and clamming.

Despite the range of seating options, the full menu will be available everywhere. Lynch and executive chef Chris Drown have crafted a menu that revolves around American brasserie food and New England produce, along with everything they’d want to eat.

“It sounds so cliche: Oh, we want to open a restaurant that we want to go to,” Lynch said. “But it was more like, is there a place I can go any time of the day and hang out and have a good cocktail or a good beer or glass of wine? What would I want to have in my neighborhood?”

The answer: Lamb tartare with shoestring fries, a tavern-style burger with pickles and Cabot cheddar, mussels with Pernod butter and fries, and smoked American hams with aged cheddar, fresh horseradish, and Vermont cider syrup. Pastry chef Christina Larson, who has been baking at Bar Mezzana since it first opened and recently started contributing desserts to Shore Leave and No Relation, is in charge of the desserts here. She curated a simple, nostalgic dessert menu: Peach pie, key lime pie, chocolate layer cake, madeleines, and frozen lemon sorbet with cold vodka poured over the top.

That won’t be the only unexpected use of vodka at Black Lamb. Beverage director Lotz’s cocktail menu is a tribute to the classics with a twist, including a black pepper- and olive oil-infused vodka martini.

“I find myself, every time I’m talking about the [cocktails], saying ‘It’s a totally normal blank, but with blank,'” Lotz said.

The rosé mojito is sweetened with a rosé wine syrup rather than with white sugar, the cosmopolitan uses white cranberry juice instead of red, and the gimlet, which Lotz said is a drink that’s due for a comeback, uses a housemade salted grapefruit and lime cordial.

Four draft lines pour three “basic” beers and one specialty beer (the Passion Fruit Margarita, an IPA from Evil Twin Brewing, will be the first specialty beer to debut), and bottles will include sours, porters, and British-style ales that nod to Black Lamb’s tavern feel. And on the wine list, guests will find options from France, New Zealand, South Africa, and the U.S., with a focus on winemakers who gravitate towards natural wines.

“I’m not going to say it’s a natural wine list, but it’s a list that prioritizes people who want to leave the Earth better than they found it,” Lotz explained.

Black Lamb debuts at 5 p.m. Tuesday with dinner. Lunch will start on Wednesday, and brunch begins on July 28. Lynch said that he’d also like to feature daily specials — prime rib Saturdays, for example — so that neighborhood guests can get to know certain dishes that they like.

“We just want to be as easy for the neighborhood to use as possible,” the chef said. 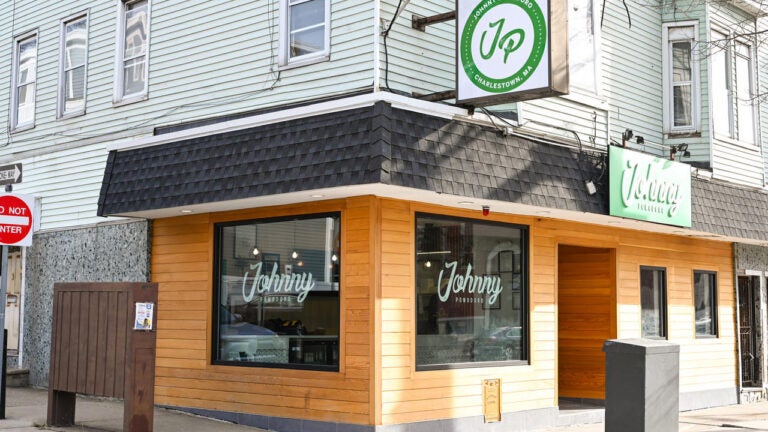