Obsessive food geeks chase at least three kinds of restaurants in Boston. One is the chef-owned indie with no corporate parent to dictate a cookie-cutter menu. Another is the neighborhood joint with an immigrant chef cooking mainly for fellow ex-pats, not dumbing it down for timid Americans. The third is the swinging hotspot, because we all have date nights and friend nights and occasions when we want to feel part of a glamorous scene. It’s rare to find these tracks converging in one location, but that’s exactly what happens at the South End’s sizzling new Ilona.

Ilona mainly serves the cuisine of Georgia (as in the former Soviet Socialist Republic), a region about which I knew little, though the menu also covers neighbors and near-neighbors like Turkey, Greece, Israel, Lebanon, and Egypt that offer some culinary orientation. You already know Mediterranean ingredients and mezze, how to share flatbreads, vegetable dips, salads, and kebabs. If you’ve spent happy nights at the South End’s Greek spot Kava Neo-Taverna or Puro Ceviche Bar on Newbury Street, you have faith in the partners here: Georgia native Irakli Gogitidze, Greek ex-pat George Axiotis, and chef Jesus Preciado. Ilona shares its siblings’ chic but informal, noisy vibe and stylish crowds with their panoply of international accents.

Mystery falls away once you order simple, Mediterranean and Black Sea pleasures like pikilia ($16), a trio of dips for scooping up with za’atar-dusted flatbread. Don’t be put off by the Pepto pink tint of beet tzatziki: it’s fabulous, as is the walnut-based muhammara and roasted eggplant baba ghanoush. The mezze section yields substantial crowd pleasers like cigeri hummus ($12), chickpea dip topped with umami-bomb roasted chicken liver and schug, a garlicky hot pepper sauce; eggplant ($14) stuffed with chopped lamb over tomato sauce under shreds of shaved manouri, a tangy sheep cheese; and shish barak ($14), a staggering savory pastry that rolls phyllo sheets around ground lamb, topped with yogurt, pine nuts, and tart sumac flakes. Terrific seafood options include a pair of split, deep-fried whole sardines ($15), and grilled shrimp ($18) with the smashing North African accent of chermoula, an herby, garlic-laden, oily relish. There’s only one shrimp on that plate, but you won’t feel swindled: the wild Nigerian black tiger prawn is a Hulk-fist-sized monster, as head turning as it is meaty and delectable. 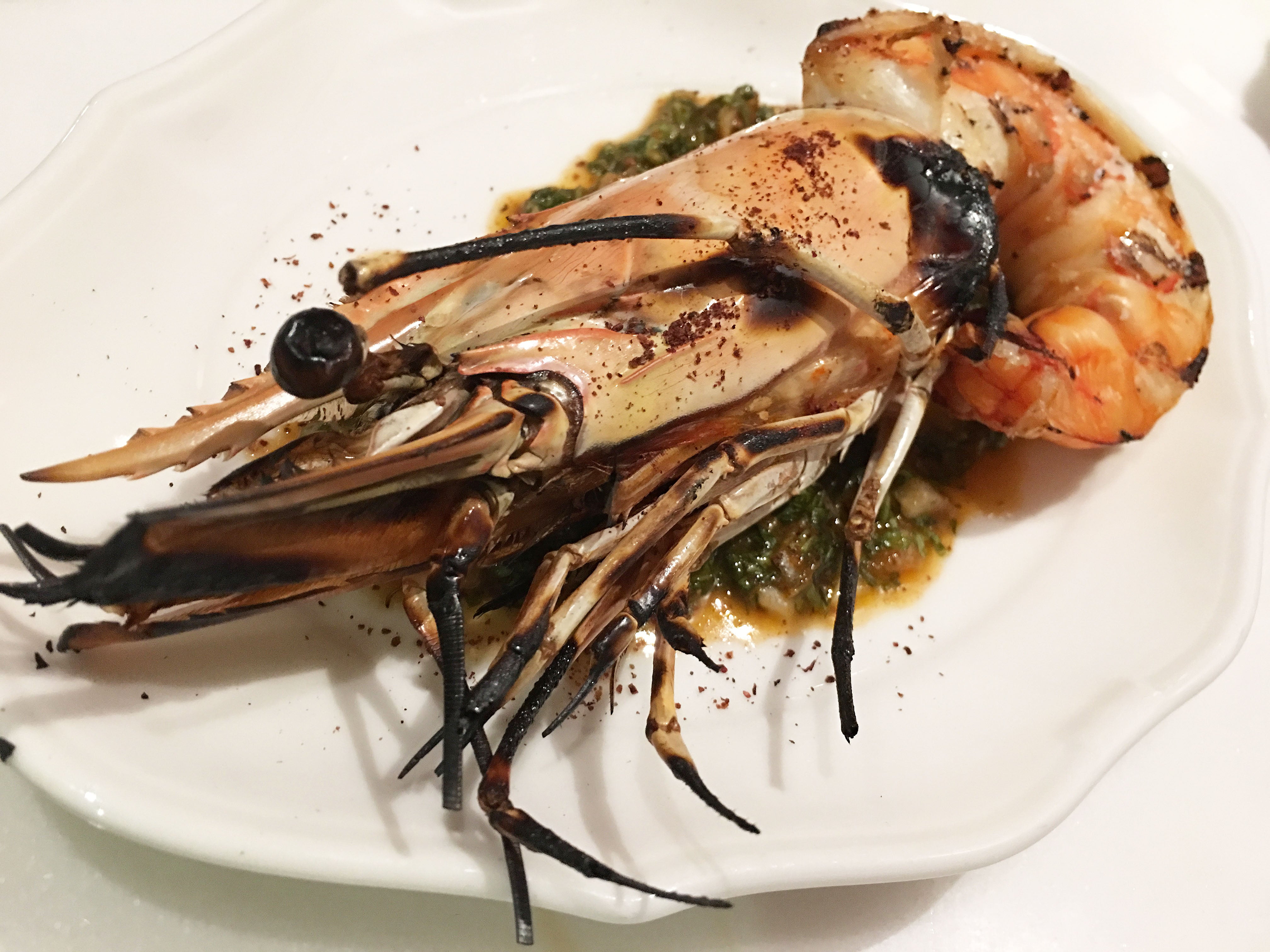 Among the chermoula-dressed kebabs, we found joy in tender cubes of monkfish ($14); slightly chewy, fatty beef shish ($14) punched up with harissa; and especially Adana ground lamb ($14) with long green peppers and cherry tomatoes. With a larger party, we’ll eventually essay crowd-sized entrees like roasted lamb ($32) and chicken ($26). The lone, off-menu dessert is a fine version of kunafee ($8), a shredded wheat-like confection soaked in cane syrup, filled with mild white cheese and topped with chopped pistachios. 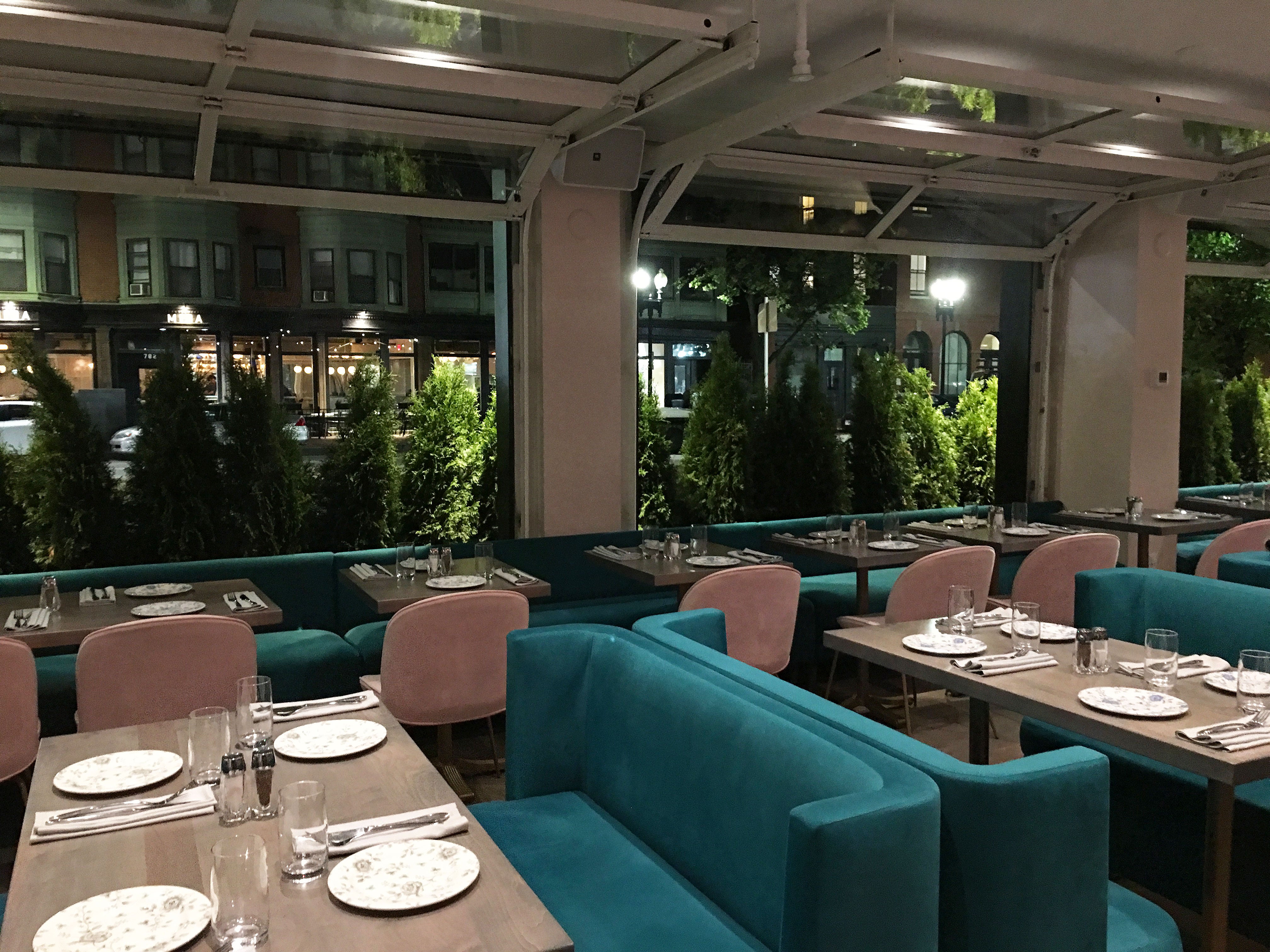 Beverage director Fotios Stamos oversees a bar program with potent specialty cocktails like the Oaxaca Old Fashioned ($14) of mezcal, tequila, and bitters, as well as fruity trifles like the Ilona’s Favorite ($12) of raspberry vodka, fresh berries, and lemon. There’s a handful of craft microbrews ($7-$12) and 14 wines by the glass ($9-$13); I loved the bracing Domaine Glinavos Paleokerisio ($13), a non-vintage Greek sparkler that some vintners refer to as orange wine but the Greeks and Georgians call amber. The reasonably priced, 33-deep bottle list ($45-$125; most under $60) favors Western and Central European producers. On the advice of wine-pro friends, I sought out the Georgians and their ancient, singular varietals. The amber 2017 Baia’s Wine Tsolikhouri ($58) is one of the more fascinating bottles for the money I’ve tasted in months: prettily, faintly tawny, with brightly-acid tree fruits up front and a little sherry and honey on the finish. I also adored the 2017 Orgo Saperavi ($60), a deep purple fruit-bomb of a red with a pleasantly acerbic bottom.

No whiff of former occupant Parish Café remains except for the long bar running across the 80-seat dining room’s back. Ilona’s new décor is South Beach meets Mykonos: bright, sunny aquas and pinks, with sandy neutrals and the occasional splash of gold and bright red. Garage-door windows open to the street afford summer breezes and regulate noise levels at prime time, though service has proven surprisingly smooth for a place still in its earliest months. For all of Ilona’s superficial strangeness, you needn’t be a hardcore food nerd to enjoy its charms. Simply understand that Georgian fare, despite some unique specifics, intersects enough with cuisines you already love to make you not feel lost. Also, don’t be startled when a shrimp big enough to need a leash gets dropped at your table. 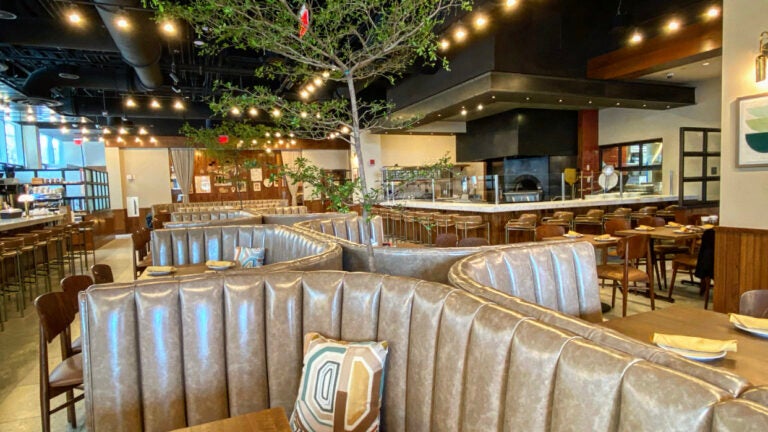